CT Folk Goes To Its Roots 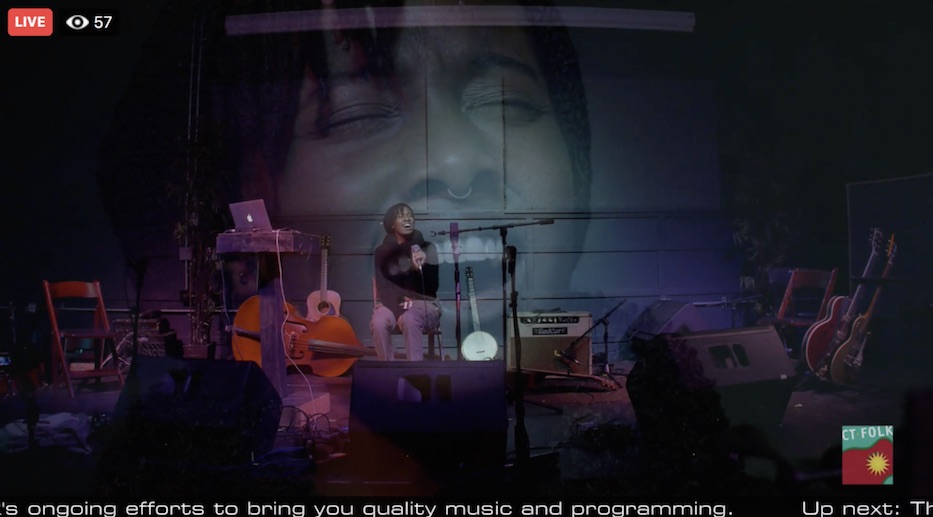 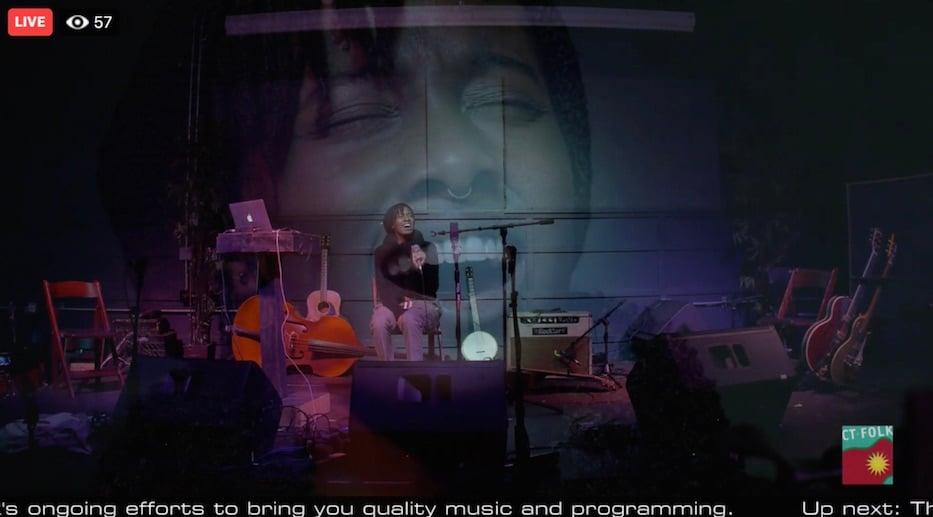 Ro Godwynn held her guitar, Chimdi, snugly in her lap. Bathed in blue and purple light, she looked to her left then right, then into the camera. Through screens everywhere, audience members joined with a click.

Gratitude reigned Saturday afternoon, as CT Folk streamed Ro Godwynn, The Moon Shells, Caravan of Thieves and Stephen Kellogg with Eric Donnelly live from The State House in downtown New Haven. Dubbed “Homegrown Folk,” the concert doubled as a benefit for the organization. It was the first live gig many of the artists have played in over a year. Over 100 attended virtually. By Monday, a live streamed video had over 3,500 views.

From the beginning of the evening, a kind of musical excitement and gratitude hung in the air. Calls of “thank you” littered the stage and rose throughout the room.  Everywhere, it seemed, there was someone glad to mic check, glad to tune a guitar, glad to reshuffle the stage chairs, glad to adjust the lighting—glad, when it all came down to it, to be there.

“This is a wonderful lineup of all Connecticut acts, and I am silly with excitement,” said Frank Critelli, a singer-songwriter and MC of Saturday’s concert. The state of Connecticut stood out from where it was emblazoned on his grey t-shirt. He gave a birthday shoutout to Godwynn, who has started a business and released an EP last year.

“Ro is equally soulful and socially conscious,” he said. “She is funky, but she is ever mindful about equality and healing, and that is an absolutely beautiful combination.” 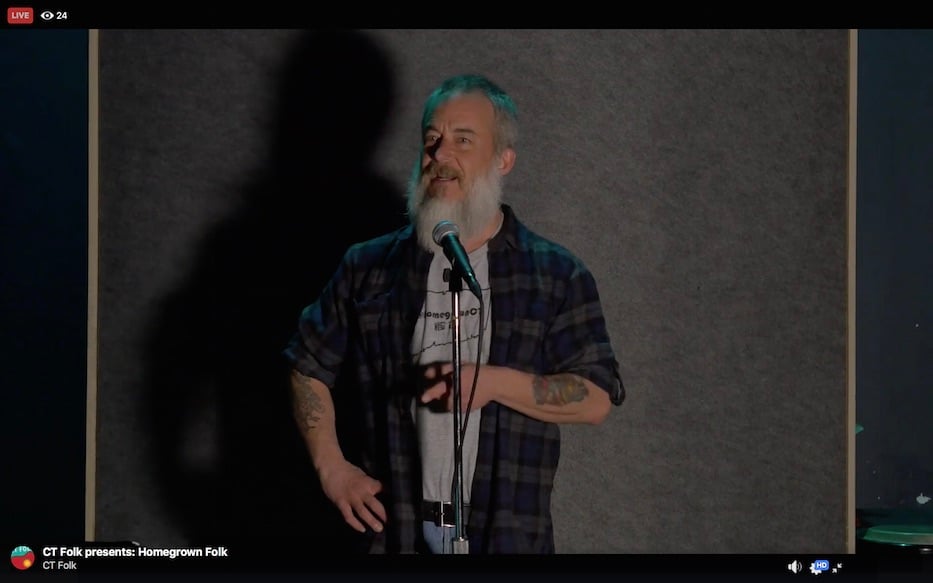 With those words, the evening transcended the computer screen and came to life. Godwynn took the stage with a microphone in her left hand. She stood, fiddling with her laptop propped below.

“That was quite an introduction.” she said. “I’m so excited to be here with all of you. To be performing. It’s been a really long time. It’s been a long time for a lot of us … I’m very, very grateful to be sharing space and time with y’all.”

She started an electronic guitar track, sat down to her left, and introduced her set’s first song “Convert.” As she began with a question— Have you felt like you’ve been lost?—her voice rose, ethereal.  The guitar built behind her when a percussion track cut in. The once tranquil energy of Godwynn’s performance transformed into a forceful ballad. Beats swarmed in, and she closed her eyes and sang. Her right hand crept up and out, extending itself to the audience.

She then transitioned to her song “Patience” from The Godwynn Experience Vol. One. While Godwynn sang contemplative lyrics—“It’s funny that I thought you would ever care for me”— she emerged as all-powerful, as her vocal notes climbed higher and her computer’s track caught every beat’s lapse.

Before long, there was a chestnut guitar snuggled in her lap, and a smile as bright as the lights pinning her cheeks up. In the acoustic part of her set, Godwynn called on attendees to re-center themselves and acknowledge the power of the present moment.

“Feel free to close your eyes. We’re going to do some guided breathing,” she said as her five fingers danced across the guitar strings. The guitar stirred pain as it built in intensity but quickly inspired hope as the pace of the plucking strings fell back again. Attendees could inhale and exhale in time with her lyrics.

“This is going to be another interactive situation,” she said. “Think of something that you really wish you had…and then sing with me.” With her eyes closed, she began singing in a soft roll, resting on her guitar for strength: Everything I need flows like water to me.

“I am filled with gratitude in this moment,” Godwynn said with the conclusion of her set. Critelli returned, exclaiming, “Ladies and gentleman give it up again and say happy birthday to Ro Godwynn!”

Newly 26-year-old Godwynn was not the only performer to honor the moment of Saturday’s concert. Influenced by the traditional music of Appalachia, Louisiana and West Africa, The Moon Shells gathered on stage with one violin, one guitar, one banjo, and three masks. While the band released an album last fall, members had been largely unable to perform together as venues remained shuttered. On Saturday, the stage united them again.

After Critelli introduced The Moon Shells as “one of my favorite Connecticut acts of all time,” Brian Slattery counted into his microphone, “one, two, three,” and off the fiddle went. Maggie Shar joined in soon after on the banjo, and Laura Murawski picked up the rhythm on her guitar. The sounds from the instruments soon coalesced and exploded through the screen.

Audience members could picture a fire as their knees pumped, heads swayed, and the blood in their veins danced. The energy of the group, as they exchanged eye glances between guitar tugs, banjo scrapes, and fiddle pulls, was infectious. By the time their first tune was over, those watching had to catch their breath.

“We met each other playing Appalachian fiddle music,” Slattery said. “And we started writing a bunch of songs. This [next] one is called Ready.”

Shar chimed in that the group had planned to make a music video for the song last March when the Covid-19 pandemic hit. Instead of the planned professional video, the group created their own. They recorded four minutes of their friends and family smiling from a distance and layered the footage over the “Ready” track.

“It’s been a year,” Shar added quietly while fine tuning her banjo.

Their music inspired varied feelings. Sometimes, the slow guitar and soft harmonies stirred pain and seemed like they could bring tears. In other moments, the three instruments electrified the stage and, free of lyrics, audience members experienced an intense feeling of presence and release.

As Slattery, Murawski, and Shar danced on their fiddle, guitar, and banjo, audience members danced on their feet and from their couches. Throughout their set, The Moon Shells repeated “thank you” to the audience, to each other, and to the CT Folk crew. Their gratitude, like their music, infected the audience.

Such was the spirit of Saturday night: a gathering of souls grateful to be together, once again. Bridgeport-based band Caravan of Thieves brought a fiery performance to the stage with two guitars and a fast, warbling and swinging sensibility. Singer-songwriter Stephen Kellogg then concluded Saturday’s concert with special guest Eric Donnelly of the Bridgeport rock band The Alternate Routes.

“For every song I wrote, through every single note, I knew I was writing songs just to give myself some hope,” Kellogg sang.