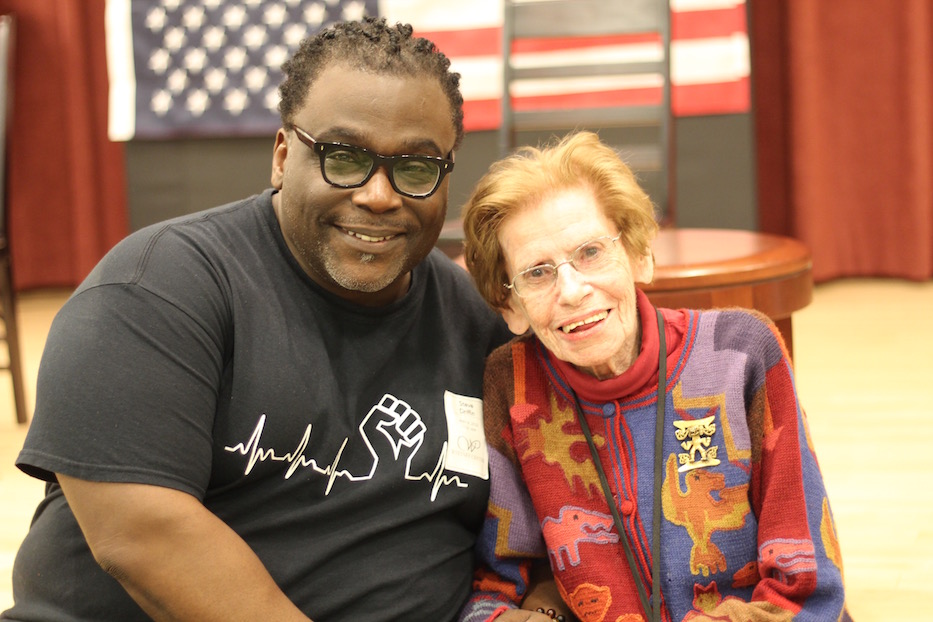 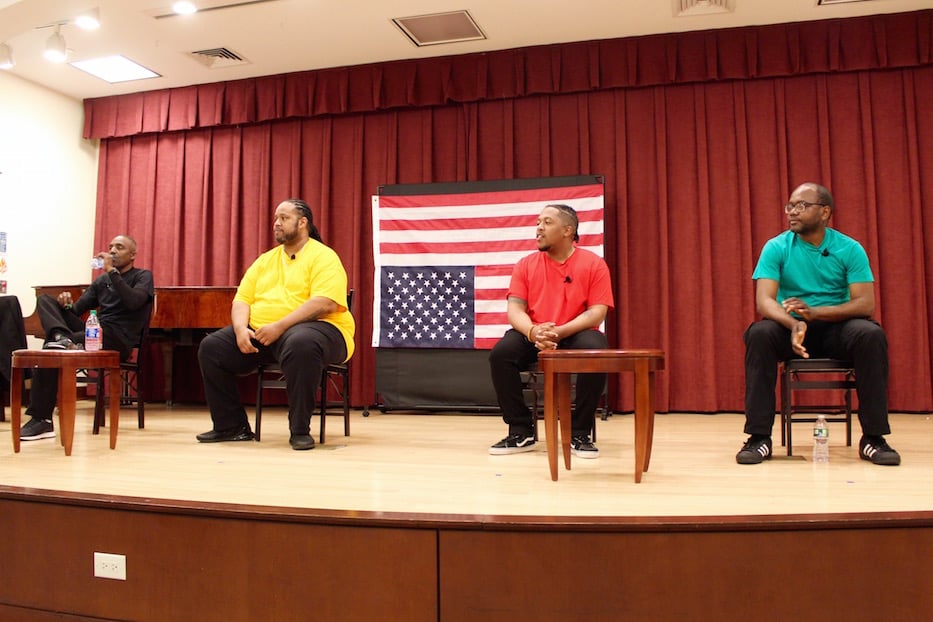 The characters Gold, Red, Black and Green looked out onto a full room as they chronicled the darkest day of their lives. Bang. It was October 24, 2010, and one of them watched as his child became a victim of gun violence. The characters shuddered in unison onstage. Muffled weeping rose from the audience.

Several rows back, Kali Williamson thought about her daughter, a student at James Hillhouse High School. In the past month, gun violence has become so common in her neighborhood that she is afraid to walk home from school.

Those worlds collided earlier this month, as Williamson joined five dozen seniors, administrators, and staff members at the Whitney Center at 200 Leeder Hill Dr. in Hamden for a performance of Death By A Thousand Cuts: A Requiem For Black And Brown Men. Written by New Haven-based poet and playwright Steve Driffin, the work addresses many of the mythologies, stereotypes, deep traumas, and internalized -isms and -obias that undergird Black masculinity and structural racism. 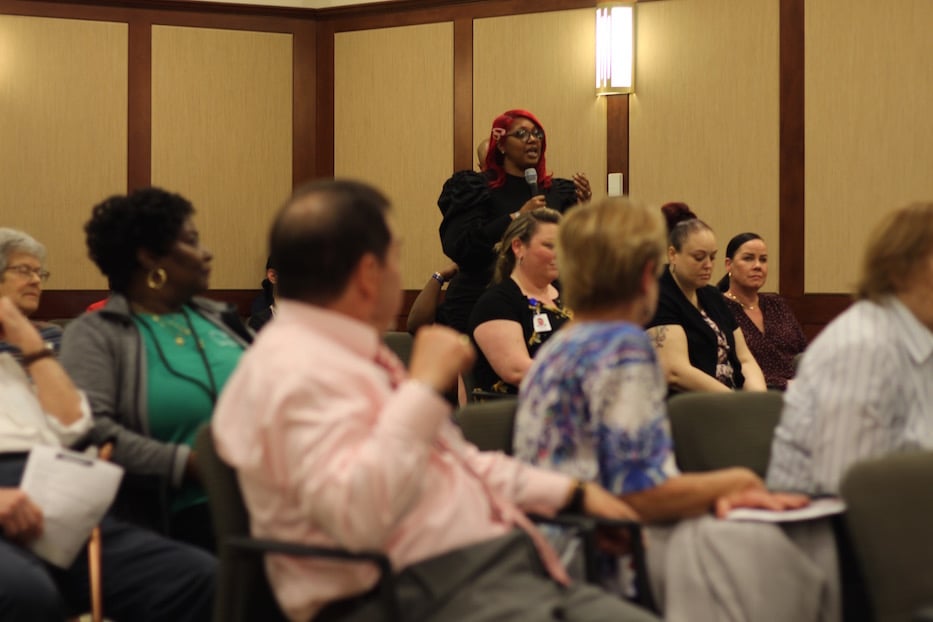 “I think that your performance puts a light on what we deal with every day,” Williamson said in a talkback after the performance. “And then we come to work, and we smile, and we act like everything is okay when it's not. When we have to tell our kids, 'sorry, you can't walk home.'”

Death By 1,000 Cuts traveled to the Whitney Center by way of Frances “Bitsie” Clark, a resident who is also a former director of the Arts Council of Greater New Haven. Last year, Driffin became one of two artists to receive a grant from The Bitsie Clark Fund for Artists. In February, Clark saw a performance of the work at Quinnipiac University.

Immediately, “I said, ‘I gotta get this thing to the Whitney Center,’” she recalled (Clark has long championed theater in New Haven: she was an early supporter of Driffin’s Yo’ Street in the 1990s and later regaled New Haveners with the story of attending Hamilton with a group of seniors). She worked with leadership at the Whitney Center to make it a reality. 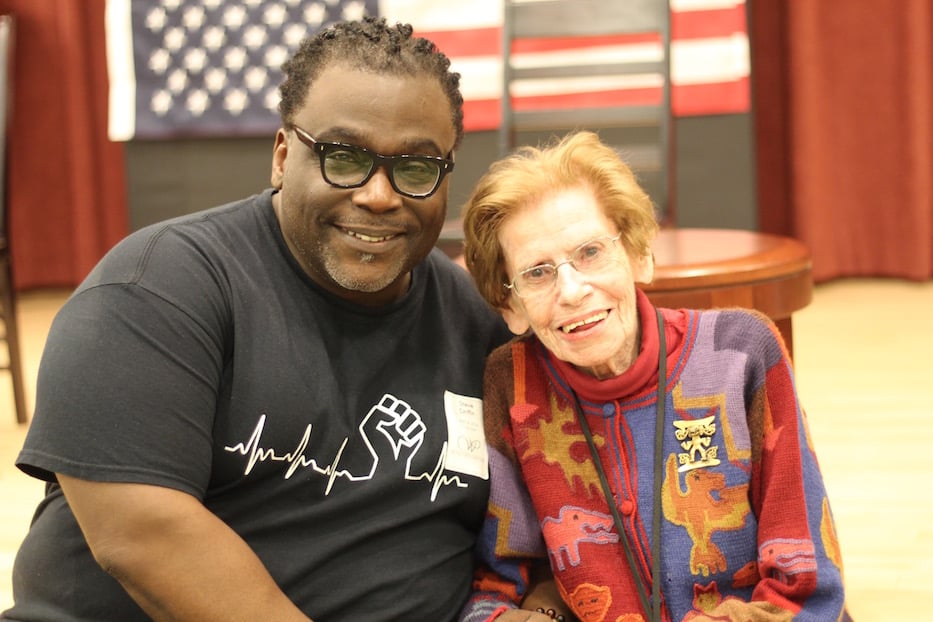 Steve Driffin and Bitsie Clark. "You guys have a giant among you," he told the audience.

In particular, Clark saw an opportunity for a dialogue about race and class that the Whitney Center has long needed to have, and not yet made time for. At the center, a sun-dappled assisted living facility that sits just off Leeder Hill Drive in Hamden, most of the residents are white and wealthy. Most of the people who work there—except in administration and board leadership—are Black. Rarely is there deep, trauma-informed discussion between the two groups.

Written through an eight-year collaborative process (read more about that here), Death By 1,000 Cuts follows character-allegories Gold (Sharmont Little), Red (Stephen King), Black (Rodney Moore) and Green (Jason Phenix Hall) as they weave similar, often interlocking narratives into a powerful prayer that sounds like reparation. The ground they cover is massive, from educational discrimination and police brutality to the poetry of Black love.

The four colors that characters sport on bright cotton t-shirts during the play represent the colors of the pan-African flag, which has been a symbol of Black liberation since its birth in August 1920.

Through almost every scene, Driffin and an able crew have slipped in sound cues that make the work feel incredibly full, from Jimi Hendrix’ “Star Spangled Banner” to The Temptations, M.A.Z.E. and backing tracks to slow jams. For the most recent performance, Driffin added a single prop—an American flag pinned upside down across a bulletin board.

Little as Gold and Stephen King as Red during a talkback. "Don't treat anyone like their lives are lesser than," King said after the show.

The writing, which yokes Miles Davis to King Solomon to Native Son like it’s no big deal, lends a deep richness to the show. As characters sail through each vignette, they are able to distill heavy, maddening concepts—the school-to-prison pipeline, legacy of the 13th Amendment and Reagan-era policies, Jim Crow, redlining, internalized anti-Blackness and the continued economic disenfranchisement of Black Americans—into intimate, accessible and often gut-churning vignettes.

At points, the work becomes conversational enough to feel like a dialogue in a park, on a playground, or on a front stoop. At others, Driffin’s knack for pure poetry and lyricism comes out, and the four deliver lines with the air of a Greek chorus.

In one moment, for instance, Green is just a kid, learning what colorism means for the first time as he navigates elementary school. Transforming into his young classmates, Gold, Black, and Red lob insults back and forth at him and at each other, all directed at the color of the others’ skin. As a white teacher with a taste for discipline enters the fray, the audience can trace both actions back to a shared white supremacy, where something foul has split open and is rotting at the root. 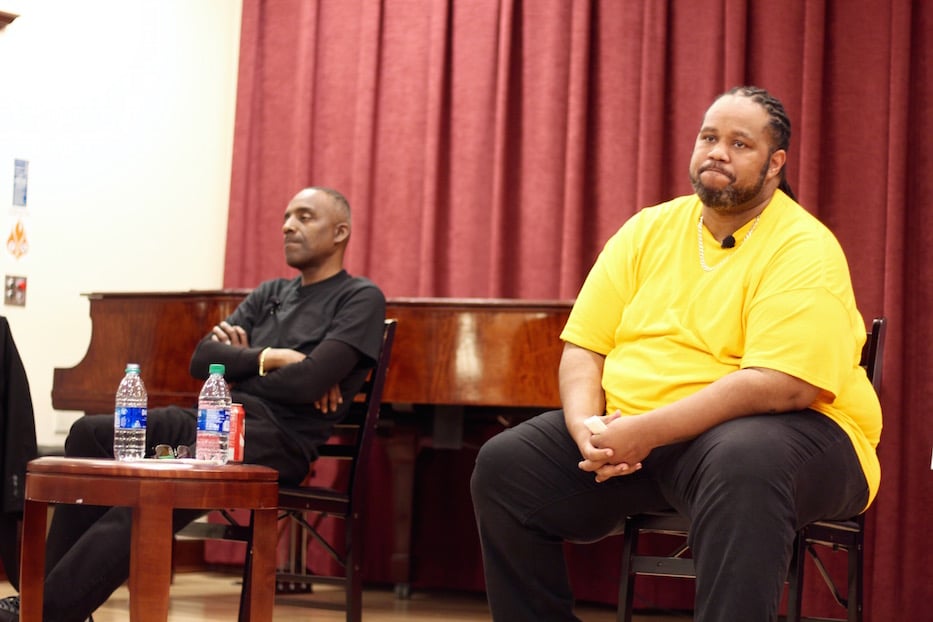 Later in the show, that same poetry emerges as the four describe “The Shuns,” which chronicle the way depression shows up and stays in one’s body. Set to a rap, it turns a chronic and stigmatized diagnosis into an accessible earworm, with lines like “The shuns make me have incredible migraines/The shuns make me feel like I’m going insane!” It becomes the perfect transition into a section on the masks that Black men wear, a take on double consciousness that takes on added weight in the midst of a global pandemic.

During both a performance and talkback at the Whitney Center, audience members looked to theater as a catalyst for conversation. Lines like “Don’t be fooled/They don’t pay you what you really worth” and “Diversity and inclusion is just an illusion” drew loud applause and cries of “That’s right, that’s right” from the audience. When the four characters slipped into a self-contained ode to Black love, music rolling beneath them, attendees responded with audible squeals of delight. So too as all four members thanked the Black women in their lives, with a refrain of “My calm/My sisters/My balm/My sisters” that washed over the space.

The line “protect your peace,” delivered in unison, got a rumbling mmmhmmm so immediate it felt more like church than the theater. When characters reflected on gun violence one by one, knowing sobs rose from the audience. It became hard not to think of a recent incident outside of Reginald Mayo Early Learning Center, in which three people fired multiple shots during a school dismissal. Miraculously, no one was hurt.

“I would hope that the majority of you took how it feels for a Black person to navigate daily life without having to worry about the next day—if it's going to be the same, or they're going to be able to take care of their family and survive,” Moore said after the show. “That's what I would just hope. That you understand the mask that we have to wear so we can survive.”

Driffin: "When you see individuals working, show some human heart. Speak to them. And I don't just mean just say 'Hi' or some general, first-level conversation. I think the world would really be a better place if we really got to understand and know each other."

As soon as the floor opened to questions, attendees took the mic one by one, many thanking actors for the work. One said she wished that she could have brought her sons. Another, who grew up on Charles Street and recognized Moore, said she was especially grateful for the play’s focus on mental health. A third, speaking through tears, advocated for the work to travel to schools and churches.

“We need our children to see this play,” she said.

"Every last word you guys spoke, I lived it,” added an attendee who grew up on Bassett Street in the city’s Newhallville neighborhood. “It's just very important for other people to know that. Maybe to change ways, or look through someone else’s eyes.” 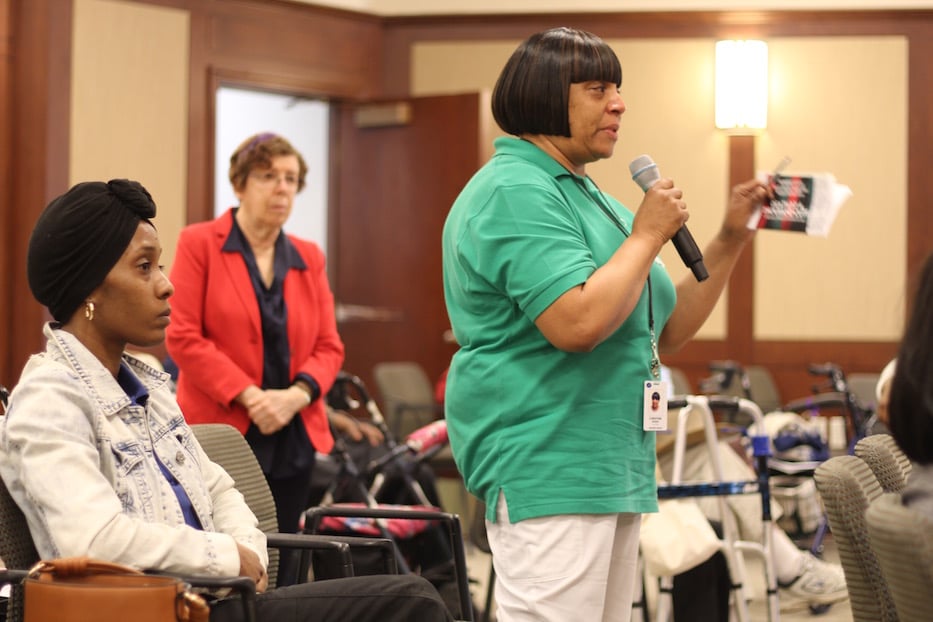 Williamson, whose daughter is at Hillhouse, said that she’d love for the work to get airtime among more white audiences, who may not spend their time thinking about the toll that racism takes on Black and Brown people every single day. In the middle of the performance, her phone started buzzing. It was her daughter, who no longer feels safe walking home from school.

From the left side of the room, a hand went up.  A resident at the center asked how—and whether—characters could find forgiveness in the show. She focused on a section in which all four characters experience the loss of a child, and realize that they will only find peace in forgiving the perpetrator of that violence. 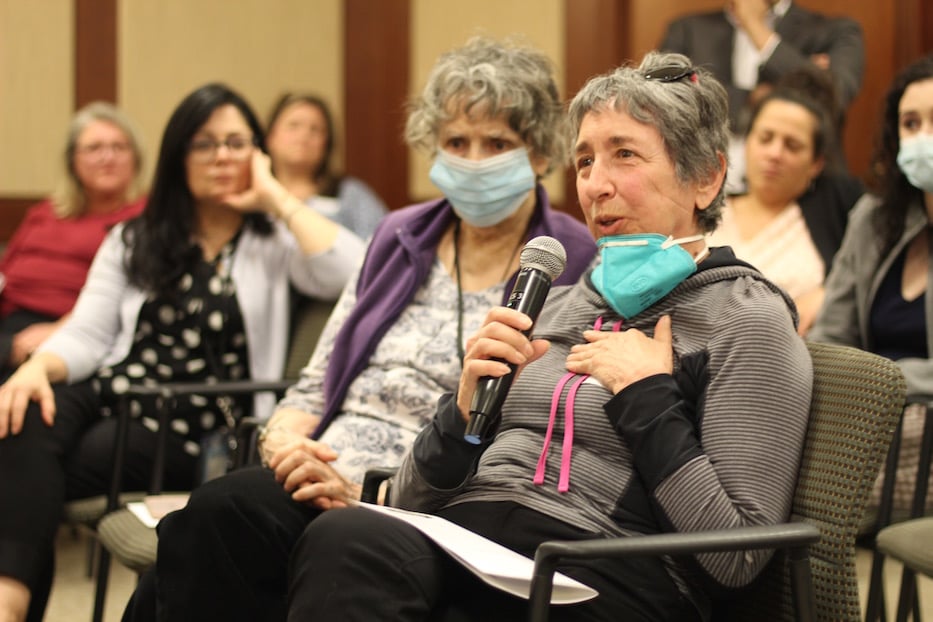 "I can't imagine myself forgiving. So I'm throwing it back to you."

Driffin wrote the scene after hours of interviews and meetings with Fathers Cry Too, a support group for fathers who have lost children to gun violence. The play is heavily informed by the time he spent with those men, including anti-violence advocates Sean Reeves, Sr. and Thomas Daniels.

"I can't imagine myself forgiving," she said. "So I'm throwing it back to you."

Little, who is a nurse, teaching artist, doting dad, and owner of two businesses, nodded as he listened. His eyes were already wet. He unclasped his hands as he spoke.

Before attendees filed out of the room, leaving it suddenly quiet, Driffin jumped back in with one final thought, directed at both the professional caregivers and residents in the audience. He and Clark later stayed to talk,  catching up with each other from the lip of the stage. When he introduced her to his daughter Kendall, a teaching artist and actor herself, Clark morphed from theater lover into well-practiced grandmother, fussing over her.

“It's not easy work,” he said. “When you see individuals working, show some human heart. Speak to them. And I don't just mean just say 'Hi' or some general, first-level conversation. I think the world would really be a better place if we really got to understand and know each other. The staff who works here 40-plus hours a week? You should know them just as much as their family knows them.”