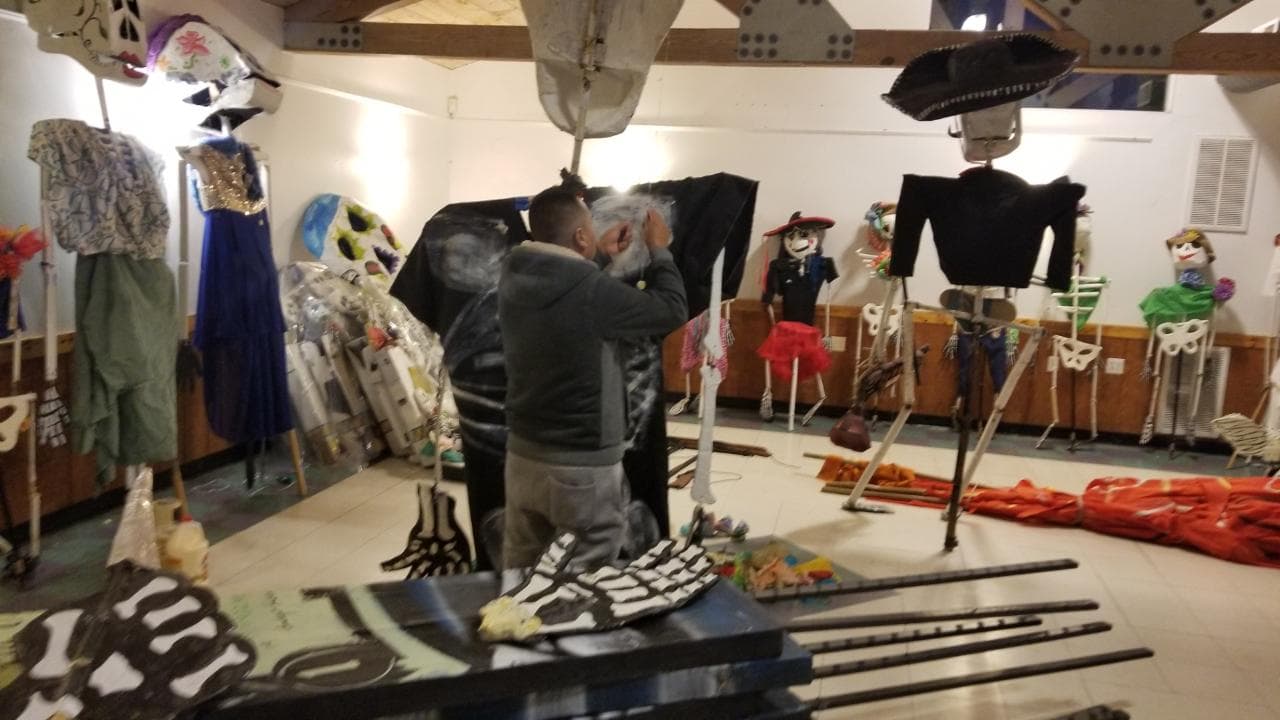 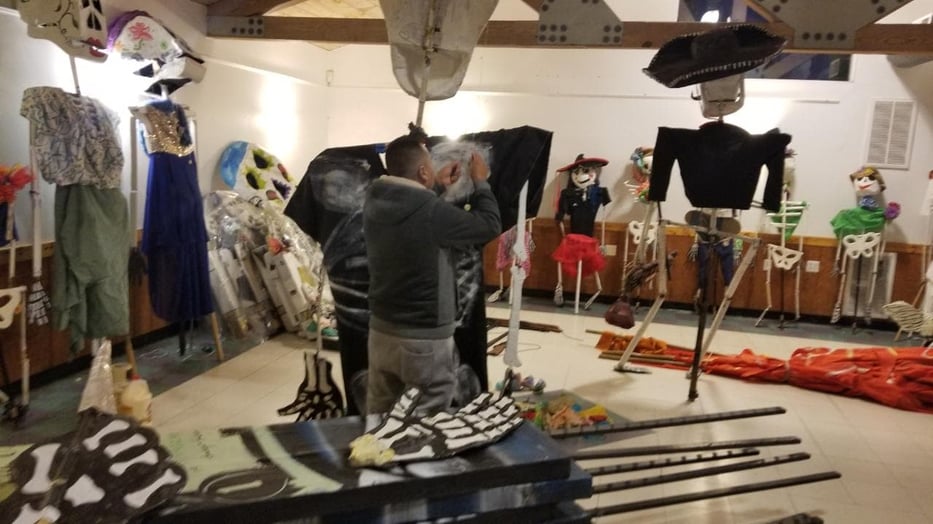 A member from Unidad Latina en Acción prepares some of the filling to go into the skeleton's costume. Contributed Photo.

Please note that there has been a weather update to this parade. ULA will hold an indoor art viewing from 4-8 p.m. Sunday at 148 Sylvan Ave., followed by the car caravan Monday evening from 4 to 8 p.m.

This Sunday, the Donald Trump look-alike skeleton is one of dozens that will be paraded through the streets of New Haven as part of Unidad Latina en Acción's (ULA) 10th annual Día de los Muertos parade from New Haven’s Hill neighborhood to Fair Haven. The event will be hosted by ULA with support from the Sex Workers and Allies Network (SWAN), Bregamos Community Theater, the city’s Department of Arts, Culture & Tourism, Hamden Action Now, Casa Otoñal Incorporated, and Black And Brown United In Action.

Instead of the traditional street parade, the celebration will be a car caravan with puppets mounted onto pickup trucks and musicians playing from their cars—some of which have trailed marchers in the past nine years. The breaking of a piñata fashioned to look like President Donald Trump will conclude the evening. An ofrenda, or altar with offerings, will be installed downtown in front of City Hall and remain up through November 2nd.

Members of ULA had the option of canceling the event due to COVID-19, but felt that the celebration was necessary to honor the lives of Black and Latinx immigrant communities that have been lost in the pandemic.

“We live in a really difficult time,” said ULA co-founder John Lugo “So many people in our community have been impacted and died. Even with the pandemic, we feel like we cannot stay silent.”

The holiday finds its roots in an ancient and precolonial traditions of ancestor worship, honoring spirits of the departed with decorative memorial altars adorned with candles, incense, and food.

This year, organizers will dedicate the celebration to all of the Black and Latinx immigrants communities who have lost members due to COVID-19. In the past, the celebration has been dedicated to victims of state violence including 20-year-old Claudia Patricia Gómez Gonzáles, who was shot dead by the U.S. Border Patrol in 2018, 33-year-old Roxana Hernandez, a transgender woman from Honduras who died in Immigrations and Customs Enforcement (ICE) custody in May 2018, and former SWAN members Leila Riviera and Ines Perez. Last year, the group honored the death of Mother Earth as a result of rapid climate change caused by capitalism.

The celebration will also celebrate the life of Maria Pabon, a lifelong activist in Fair Haven who many described as a source of light. Pabon passed away in late May at the age of 66. During her time in Fair Haven, she worked at New Haven’s Bubble and Squeak laundromat for over 20 years. In her time there and in the community, she became a beloved figure, earning the titles of “Godmother Maria” or “Comadre Maria.”

While Pabon herself was Puerto Rican, she was a fierce advocate for the Mexican community in Fair Haven, going so far as to become involved with communities in New Haven’s sister city of Tlaxcala, Mexico. Her commitment to building community across borders and divides was unparalleled, said Lugo.

To honor her, members of the community will recite Calaveritas, satirical light-hearted poems that poke fun at people’s life. She will also have her photograph placed at the altar downtown.

The decision to include President Donald Trump in the celebration was a careful and important one, Lugo added. Aside from the piñata, the group will debut a new puppet of the president. The piñata and puppet are not meant to wish death upon President Trump, said artist Jesse Rivera.

For her, the celebration is overdue for so many members of the community who have not been able to mourn their loved ones in the community due to COVID-19 restrictions.

“This is your celebration,” she said. “We can still give that in a limited way but we can keep it going.”

This year, the organizers encourage people to "Vote Against Hate." The campaign included a phone banking event for immigrants and workers’ rights this past Thursday. The rest of the campaign focuses on post-election organizing including Count Every Vote Rallies in New Haven and Hartford on Nov. 4. The group also asks that people join a call-to-action town hall hosted by Frontline to discuss post-election organizing.