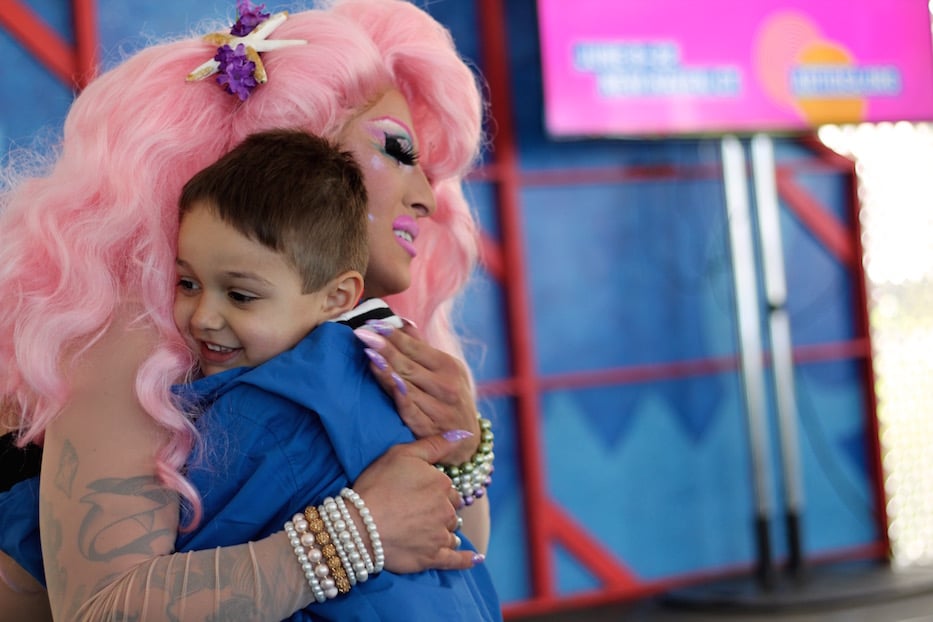 William Gonzalez is partial to mermaids with blue hair. But Thursday afternoon, a glitter-scaled, pearl-sporting songstress from the deep opened his eyes to the fact that pink is an option, too.

William, who is four, was one of two kids and over a dozen adults to attend the inaugural Drag Queen Story Hour (DQSH) at the International Festival of Arts & Ideas Thursday afternoon. As unrelenting rain turned the green into an underwater kingdom, Loosey LaDuca swept into the festival tent in blue heels, a blue tail, "flippers" made out of green tulle, a bedazzled purple bustier and gauzy white top.

It is the second Drag Queen Story Hour to take place in New Haven. The first was held last summer at the Stetson Branch Library, where New Haven queen Kiki Lucia read to kids during their summer break. Like that one, this event followed a national trend in which drag queens read to kids at libraries, in churches, or at public festivals for about 45 minutes.

Born and raised in Ansonia—”I’m likely the only drag queen to come out of the Valley,” she joked—LaDuca now performs around the state, and found herself in New Haven before another DQSH performance at Middletown Pride this weekend. 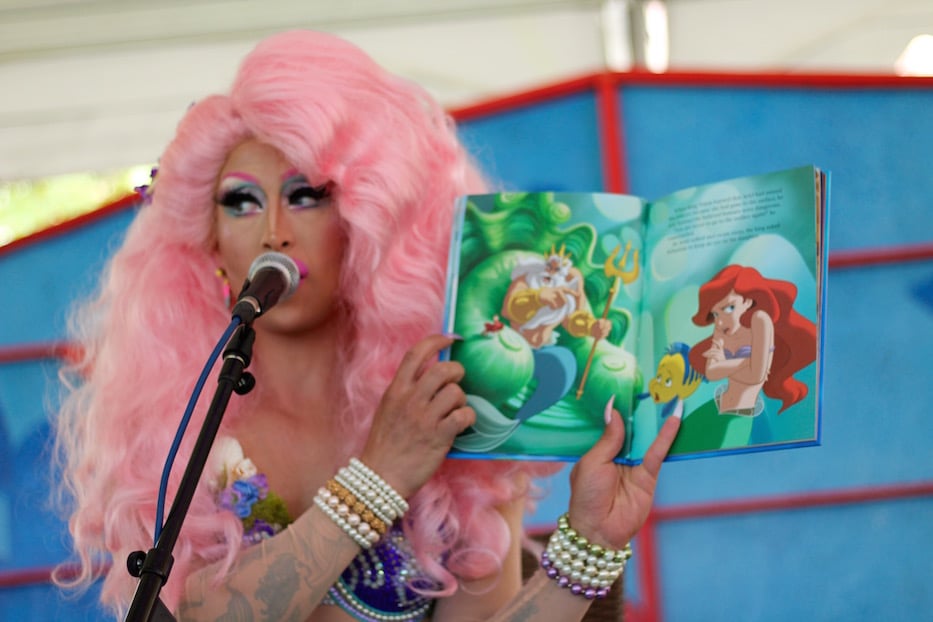 As if she had planned for the wet weather, LaDuca pulled out selections from Disney’s The Little Mermaid and Jess Love’s more recent Julián is a Mermaid, which earlier this year won a Stonewall Book Award for its message of cross-cultural inclusion and gender fluidity. While Ariel pined after Prince Eric, Julián and his Abuela dressed as mermaids and chatted in a mix of Spanish and English, hitting the beach in Julián’s flowing, homemade mermaid ensemble.

For her, LaDuca said, the story hours are as much about the adults who attend as the kids. She explained that kids are often excited, but not specifically surprised, to see a drag queen in their midst. Adults, on the other hand, may come with reservations or a lack or knowledge about drag. The story hours are intended to open them to positive LGBTQ+ role models in a fun and educational environment.

“To children … it’s just someone who is wearing fun colors and lots of shiny things, and they think nothing of it,” she said. “Kids aren’t the ones that are protesting them. It’s the adults. So I like to think that they’re important for adults to come to, and experience that it has nothing to do with anything that is based in sexuality, or anything that is inside of just reading a story to kids.”

“If you can choose books that have to do with love and acceptance, it’s beautiful,” she added of books like Julián Is A Mermaid. “It literally shows that for children to grow up without self-doubt and issues, they need supportive guardians.” 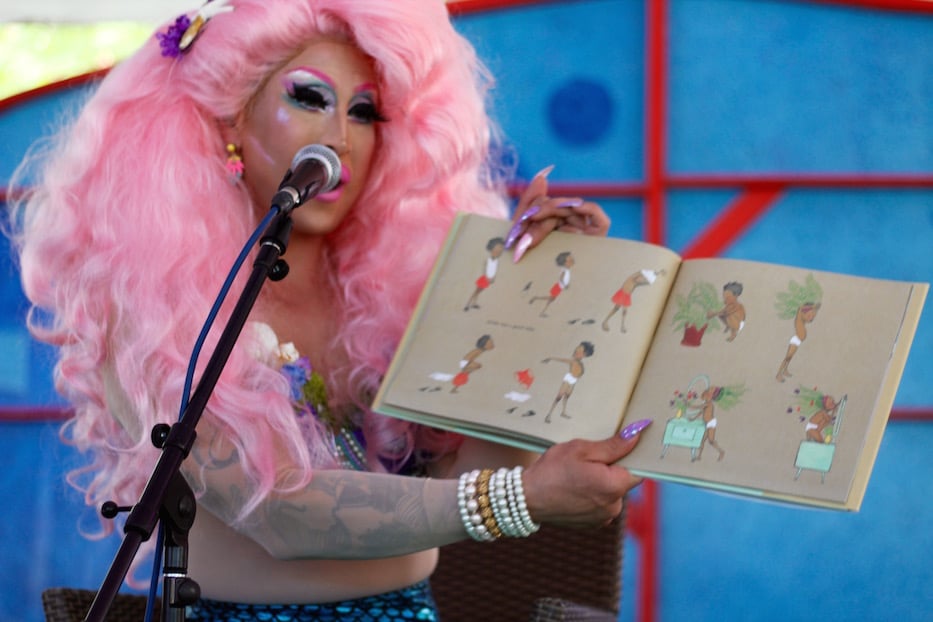 From the moment she took a seat on the stage, she tapped into that sentiment, peppering her reading with spot-on humor and frequent check ins with the audience. When an ambulance passed by early in The Little Mermaid, LaDuca paused, looked out at where it passed on Grove Street, and then gave an audible “rude” that sent the audience into a fit of layered laughter.

When the audience got a peek into Ariel’s hodge-podge collection of human objects, she smiled and noted that “it’s like an episode of hoarders.” When Ursula, the mighty purple sea witch, transformed her thick, tentacled self into a skinny white woman named Vanessa, LaDuca had some choice words for her too.

She turned to a page with a full length picture of the transformation, as wind billowed through Vanessa’s hair. In disguise, Vanessa pulled Prince Eric under her spell.

“I want to see!” piped up William from the front row. LaDuca opened the next few pages to a terrifying image of Ursula, and William leaned in further. He stayed close to the stage for the next book, as LaDuca brought Julián and his abuela to life. He danced along as she wound down with a clapping, lively rendition of “Baby Shark,” and a bittersweet, crooning “Part Of Your World.”

“It was great!” he said afterwards. “She is beautiful.”

In part, LaDuca said her participation is also a way to catalyze change. While she does not see drag as explicitly political—”at the end of the day, it is a job, and a way to make money”—she also believes that DQST is a way for her to spread tolerance in Connecticut, year-round and especially as her June fills up with bookings. She said the latter book feels especially timely this month, as individuals and organizations celebrate the 50th anniversary of the Stonewall Riots in New York City.

“It’s tough bringing politics into a job, because you don’t want to ruffle any feathers because you want your check to clear,” she said. “But at the same time, I think that anyone who walks outside of their door in drag is making a political statement in general.”

“I think of it even when I’m out of drag,” she added. “I’ll be getting ready to leave my house and think, ‘you know what, I really want to wear these short short short shorts. And I might question it, but I’ll put them on anyways. Because if people don’t see it, they’ll think it doesn’t exist. And if people are ignorant to the existence of something, it makes it far easier to hate it.”

To watch more from the event, click on the videos below.