A Renaissance Grows In New Haven 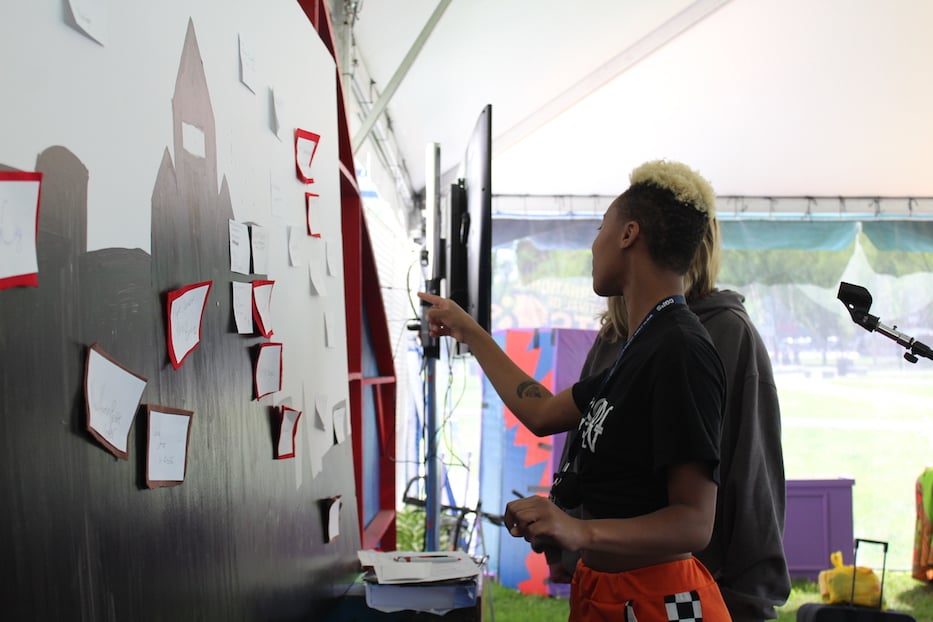 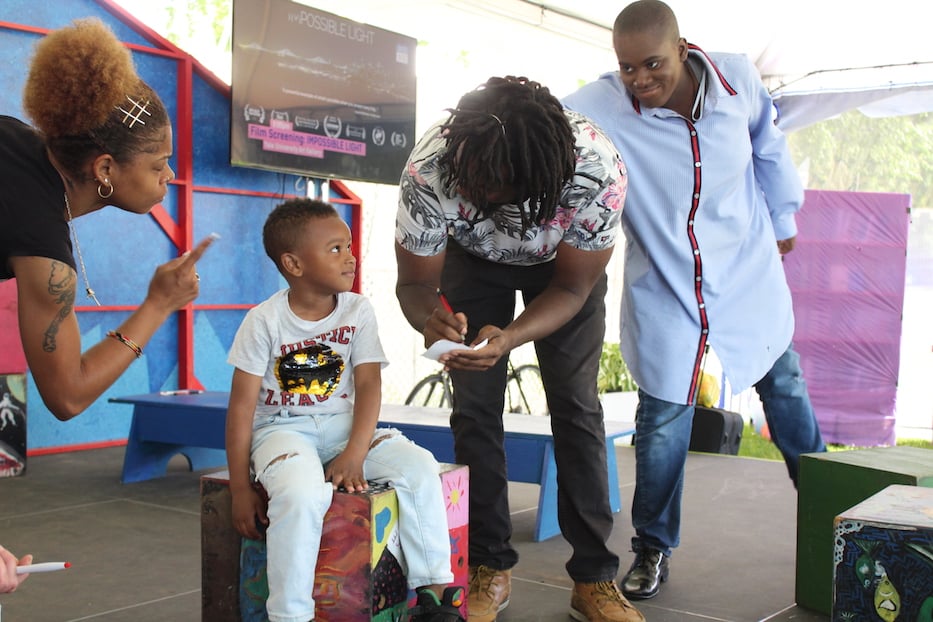 Two generations of New Haveners met to piece together a large silhouette of the Elm City skyline—and found themselves talking about a city Renaissance that’s already underway.

Wednesday afternoon, over 15 people gathered on the New Haven Green for “New Haven Renaissance,” a discussion, feedback session and spoken word workshop led by poets and wordmasters Salwa Abdussabur and Aaron Jafferis. The activity was part of free programming that takes place during the International Festival of Arts & Ideas, which runs through June 22.

It was followed Thursday evening by Wordfest, a city-wide high school poetry jam held at the State House. More information about remaining free events, including panels on activism in the arts, is available on the festival’s calendar.

As teenagers, lifelong community members, New Haven transplants and daytime visitors to the area filled the festival’s tent, Abdussabur said they had initially toyed around with the idea of Renaissance—a rebirth—because they feel drawn to the word as a way to practice artivism. That is, art as it intersects with activism and community organizing against police brutality, surveillance of Black and Brown bodies, and gentrification that is rapidly overtaking New Haven. 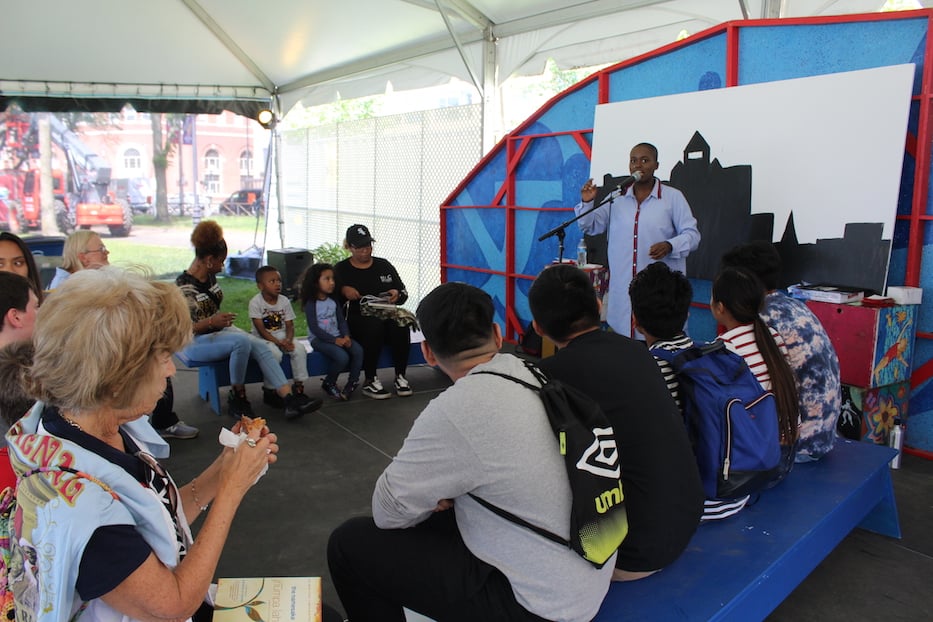 Jafferis echoed that sentiment in a spoken word piece adapted from his work Smooth Criminal. In it, he unfolds an imagined conversation between him as a child and his father, centered around growing up safe in New Haven.

In the piece, he recalls trying to differentiate between ”Yale” and “Jail,” describing the university’s fortress, funds, and influence in the city. Wednesday he invited the audience to join in, giving a number of statements after which they could shout “Yale!” or “Jail!”

Abdussabur said that’s just one example of widespread and systemic gentrification in the city. They noted the section of the Hill once referred to as “the Jungle,” where until recently the Church Street South apartments stood across from Union Station. Now, Abdussabur described that and surrounding properties as being “gobbled up” by Yale and Pike International.

They mentioned the juxtapositions they see within New Haven’s neighborhoods and gentrified areas, noting that a party bike may roll loudly through the city and stop traffic, while young Black kids are policed for being on their bikes. They suggested that activism and coalition building is a way to push back against those forces, while also creating a web of support.

“[A] big part of New Haven’s rebirth are these movements,” they said. “We make up New Haven. These movements are what sustains us, holds us…[and] are an integral piece in making new Haven, New Haven.”

“I’m a relentless believer in New Haven’s—not success—but our growth,” they added. “We are the Renaissance. We are New Haven.”

Other topics included the need for a youth center, losing talented youth in New Haven to other towns, and the increased presence of Yale in the Dixwell and Newhallville neighborhoods, which they suggested caused a near fatal interaction between police and Stephanie Washington in April (Hamden Police were also involved in that interaction; New Haven police were not).

Abdussabur suggested that the festival, now in its 24th year, was a fitting intersection of town and gown, people in the New Haven community and people outside of it., to try the discussion out. They said that the event also offered the power to “engage people from outside of New Haven” about its movements and identity. Participants were asked to name the organizations, movements and initiatives that they’ve seen mobilizing, and stick them on the skyline.

Several students from Career High School mentioned Save Our Teachers, an effort to prevent the Board of Education from reassigning 53 high school teachers, largely in the arts and humanities. 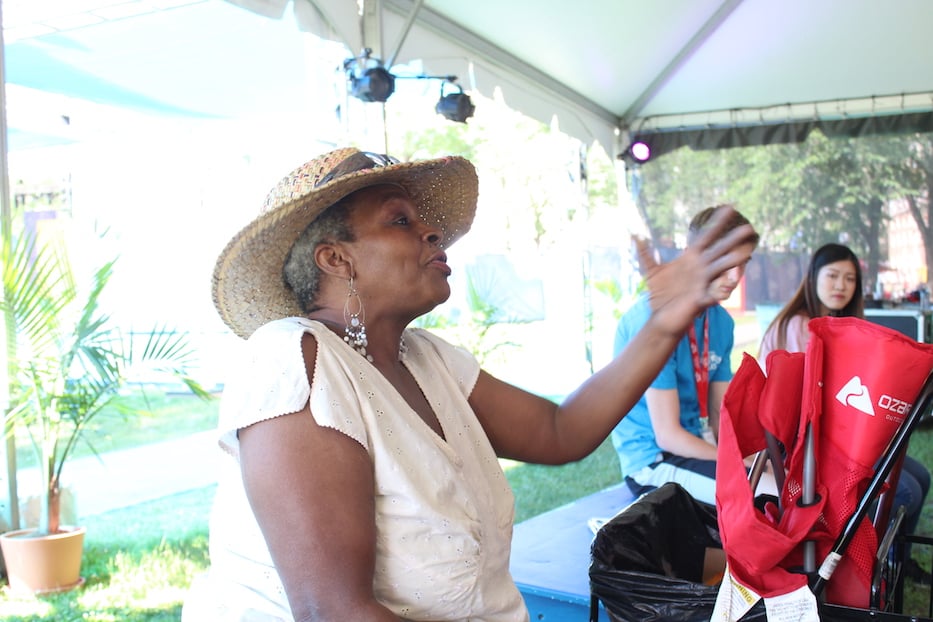 Others wrote down “People Against Police Brutality,” “Turnbridge,” “Justice for Stephanie Washington,” and requests for more women's shelters in New Haven. Attendees wrote their notes on pieces of white paper and attached to paper “bricks” that were tacked to the skyline, symbolizing how these movements are the foundations of New Haven.

Participants also expressed them in movement, forming groups to act out No Child Left Behind, Save Our Teachers and also the act of destigmatizing mental health and addiction.

As the session neared its end, attendees were given a sheet of paper and 15 minutes to write a poem personifying New Haven or how New Haven’s identity connects to their own.

Some read poems about their experience with mental health, health clinic communities in Fair Haven and activism against Yale police officers. One poem personified New Haven as a young person on a bike with training wheels, asking “how do we know when to take them off?”

Abdussabur suggested that New Haveners can join the Renaissance easily—if they haven’t already—by challenging people to “give up their power,” listen, talk to each other and to have open conversations about community engagement and activism.

“Conversation creates compassion and understanding,” they said. “And a common ground.”