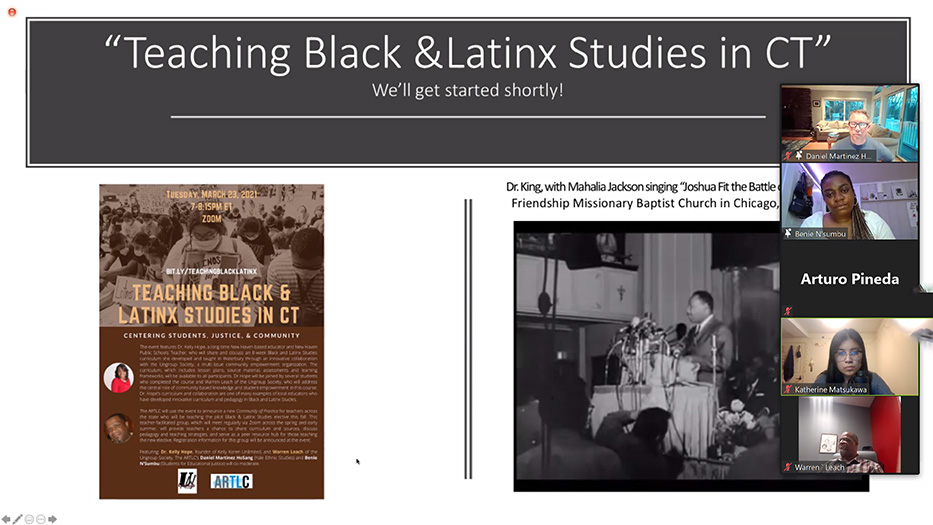 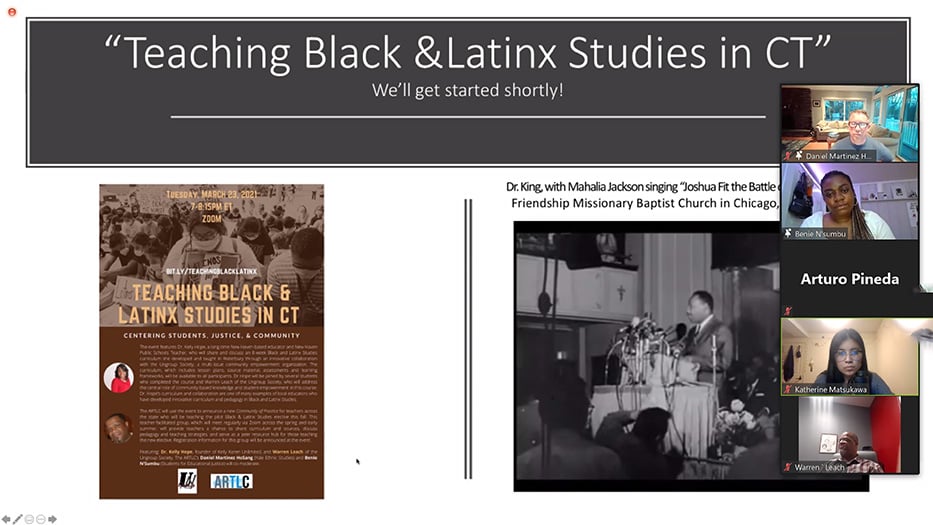 What book did Paul Ortiz author? What did Civil Rights organizers call their education programs in the South?  What year marked the first Black-owned barbershop in Waterbury? 1980? 1925? Or maybe much earlier?

The answer is actually 1846, when Nelson Weston opened up the first Black-owned barbershop in the basement of Waterbury Baptist Church. A year from now, educator Daniel Martinez HoSang hopes that more Connecticut students know the answer.

Martinez HoSang is the co-founder of the Anti Racist Teaching & Learning Collective (ARTLC), a collective of anti-racist students, educators, and grassroots organizers dedicated to undoing white supremacy and deep-rooted racism in Connecticut’s classrooms. Last week, he and members of the Waterbury-based Ungroup Society led over 70 educators in a session on how to more effectively teach Black and Latinx Studies in the state.

They also announced a new, educator-led “community of practice,” for teachers who wish to pilot the course in their classrooms this fall.

“It’s a time of a lot of loss, and pain, and uncertainty for a webinar tonight,” Martinez HoSang said as he opened the discussion, which is available here. “What is our role as educators in building a world where everyone can see that life is precious?”

As part of Connecticut Public Act 19-12, all public high schools across the state will be required to offer Black and Latinx studies as an elective course by fall 2022. A curriculum is set to become available this July, according to the State Education Resource Center (SERC). Earlier this year, Hartford State Sen. Douglas McCrory said he would like to see it become required for all grade levels, a move that would require further legislation.

Dr. Kelly Hope, a New Haven English teacher, presented on the curriculum she developed alongside the Ungroup Society for an after-school program  A copy of her curriculum can be found here. She suggested that facts like the opening of Weston’s  barbershop should be common knowledge, especially among Black and Latinx communities that live there.

“Students learn about the same historic figures and nothing beyond them,” she said. “Our education is taught from a subservient standpoint … we start with a deficit.”

In 2019, the Ungroup Society reached out to Hope because Waterbury residents felt that Black and Brown children were not learning the full extent of their history.  Warren Leach, a senior facilitator at Ungroup, recalled the interest in bringing in her teaching. At the time, the group was unsuccessful in convincing the Waterbury school system to teach the material in schools.  As a result, the course was taught as an eight-week after school program.

“People believe the studies should only happen in the classroom but it has to occur in a community setting too,” Leach said. “We were not fully preparing them [students] for the world that is out there.” 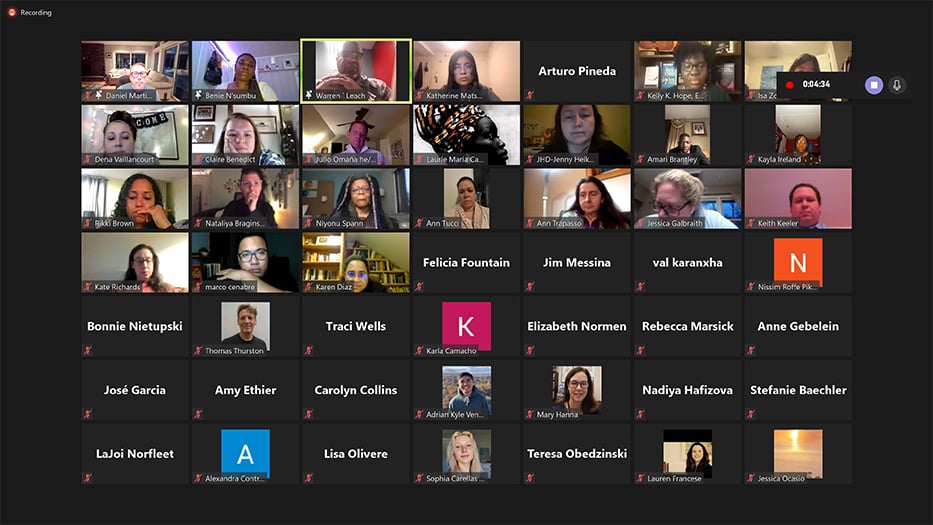 To develop the course, Hope began by looking at her own lived experience as an African-American woman in the United States at this given time. She considered how her personal beliefs and perceptions could influence curriculum development.

In the first unit, “Standing Grounding,” students are encouraged to question the education they have received in school. Amari Brantley, an alum of the program, had learned very little about Black and Latinx history at his predominantly white, Catholic high school. He attends Sacred Heart High School in Waterbury.

“Black history was only discussed the 28 days of Black History Month, and and we only talked about slavery onwards,” he said.

Another alum of the program, Kayla Ireland, spoke about how different the curriculum was compared to her high school’s Black studies course. Similar to Brantley, her course also began with slavery. Any pre-slavery history was left out.

“I wanted to learn more about my culture and where I came from,” she said. “Things that were brought up in our school were never really dissected.”

Some of the recommended texts in Hope’s curriculum include An African American and Latinx History of the United States by Paul Ortiz and 7 Little White Lies: The Conspiracy to Destroy the Black-Self Image by Jabari Osaze. In addition, SERC recently released a reference list with suggested books and resources, from W.E.B. Du Bois’ The Souls of Black Folk to Ibram X. Kendi’s Stamped from the Beginning.

The other three units of Hope’s curriculum focus on themes of family ties, gender roles, oral traditions, and community ties. In Waterbury, she taught the materials through a mixture of media including music, audiobooks, tv shows, poetry, nonfiction, and literature.

The curriculum is also meant to upend traditional student-teacher dynamics by having students center their lived experiences within the classroom. It encourages them to lead discussion and pursue their own interests.

“Your knowledge at 16 and 17-year-olds, your lived experience is invaluable in this education,” Hope said.

For example, Hope recalled, a Waterbury student was interested in dress codes at her school. She conducted research through the course and learned that her high school was suspending people for wardrobe infractions at a disproportionate rate.

“We are providing them the tools to end systemic racism,” she said. “As an educator, our purpose is to empower students to ask questions.”

Educators who will be piloting Black and Latinx studies this fall are eligible for support from ARTLC. The organization will provide lesson plans, sources, and host remote meetings. Email ARTLC for further information.