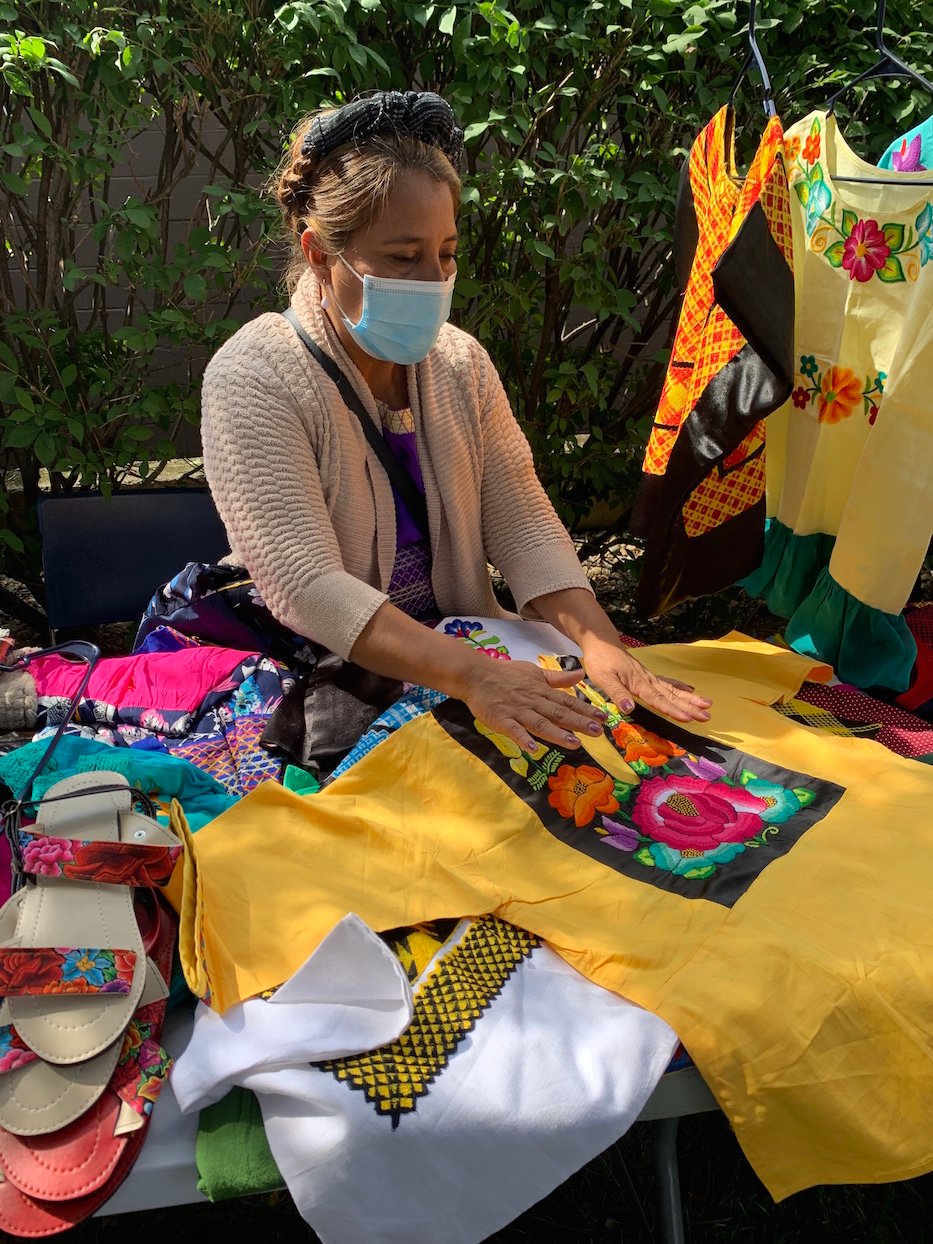 Fani Rosas started making clothes as a way to support her family in San Juan Guichicovi, Oaxaca, Mexico. On a recent Saturday, her work transcended borders as she brought her craft to New Haven, and told her story of work and sacrifice through art.

Rosas was one of several Indigenous craftswomen at the Oaxaca 2021 Connecticut Expo, held on a recent Saturday outside of the Fair Haven Branch of the New Haven Free Public Library. The expo was organized by artist and activist Sarahi Zacatelco with help from library staff, who also worked with her on a public art project this summer. It featured women artisans from Oaxaca, as well as those now living closer to New Haven.

“I love my culture, I want people to see our craftswomen’s work made by hand, something that our ancestors left,” Zacatelco said in Spanish. Despite violent colonization by the Spanish, she continued, Indigenous women kept their hands, meaning they could make garments and preserve that piece of their heritage.

“We have a lot to give, we have magical hands,” she said.

The first thing to catch attendees’ eyes were the vibrant colors, which seemed to stretch in every direction.  Clothes and textiles hung from tree branches, the tops of tents, and on clotheslines flowing in the breeze. They came in all sorts of styles for men and women—garments, jumpers, dresses, embroidered button-downs, jean jackets, and coverups. Each piece of clothing had its own pattern and design. A bright yellow blouse boasted a  V neckline surrounded by hot pink, turquoise, lavender, and orange flowers, with green stems peeking out from the sides.

“Thank you very much because you came, here, to meet what we make in our town, these beautiful Huipiles, that’s what it means,” Rosas said in her native language, Mixe. The word Huipiles is the word for the garment worn by Indigenous women in Mexico.

“Just because you wear this clothing doesn’t make you any less,” she said. For over a year, she has watched Oaxacan artists including herself suffer during the pandemic. Tourism, which normally boosts business, is nonexistent. “Our people need help.” 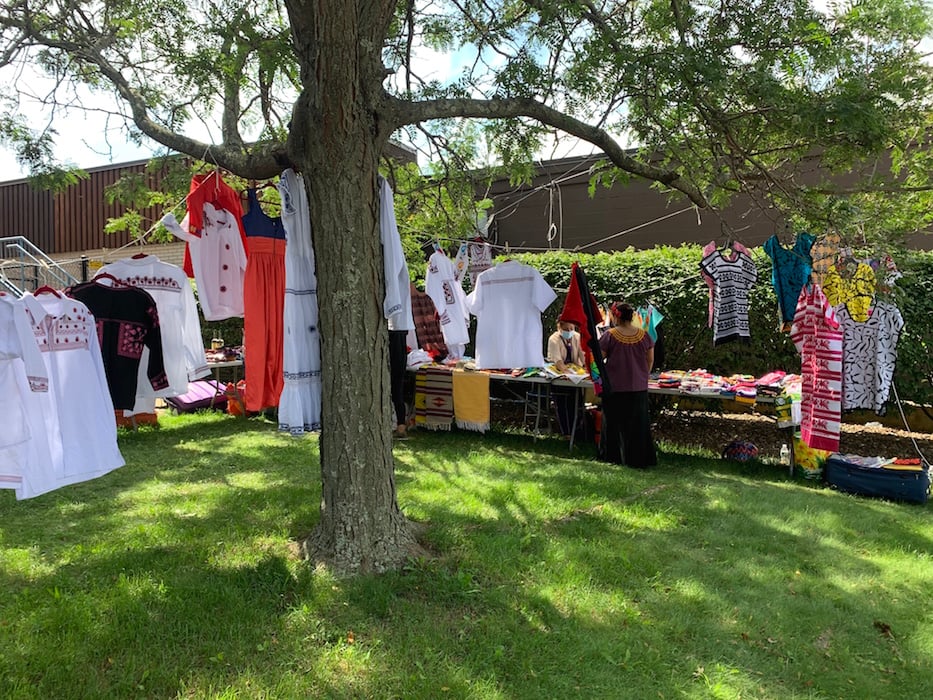 There were also accessories such as necklaces, sandals, hats, long shoulder bags, pouches, and jarras y tazas de barro or delicate clay pottery mugs. Each had the same scratchy but smooth texture, cool to the touch. For many attendees—including this reporter—they brought a immediate glimmer of home. Tazas de barro are different from thick ceramic mugs because they are very fragile: one wrong move, and they can shatter.

For many attendees, Mezcal bottles that came straight from the south of Mexico conjured flavorful memories as they peeked out from tables. One look was all it took to imagine the spicy taste of the drink, topped with the spicy, salty mix of chili and lime known as tajín.

“We need to support each other as Mexicans, no matter the color or where they’re from,” Rosas said. “We have a beautiful culture, we have everything.” 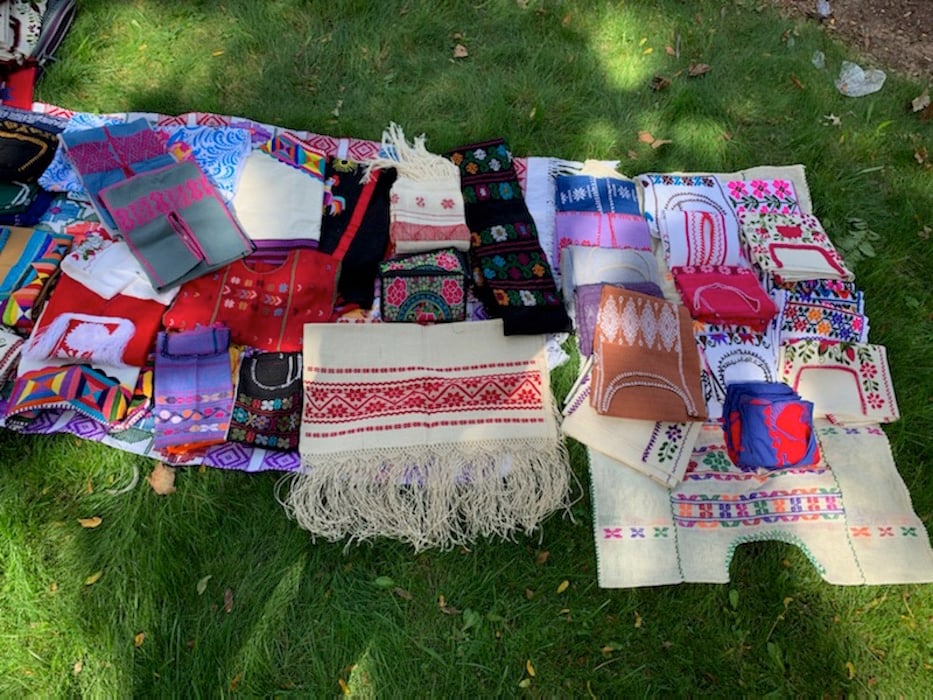 The year has been a difficult one for her in more ways than one. Rosas is part of a collective of women, all of whom come from different regions of Oaxaca. To make these garments, they use a machine named “Máquina de Pedal,” a specialized sewing machine that has chains to make geometric shapes. She said they had to reunite and knock on doors to sell the product.

As Rosas’s voice broke, she explained hadn’t seen her sister, who is in Texas, in 20 years. She said she wished more than anything to finally see her now that she was finally in the U.S.

“We are pure,” she said. “We’re very happy to be here. We are women with dreams, we empower ourselves, we fight, it’s not easy, but also thanks to our immigrants who also fought to be here.” 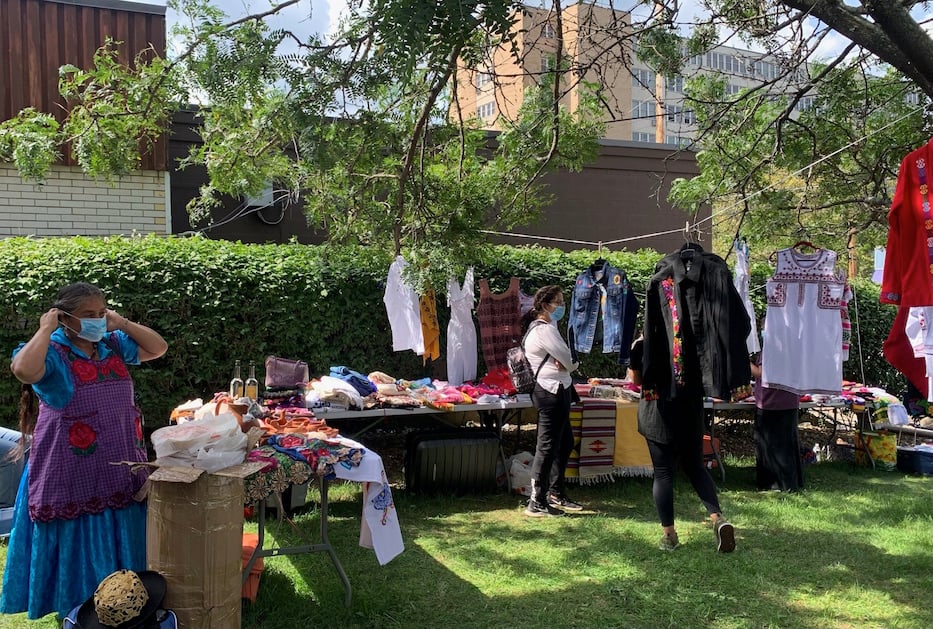 Fellow artist Alejandra Luis said she came to New Haven to look for “room” for craftswomen to be able to sell their product. Initially, the group arrived  in Los Angeles, California. Then they traveled to Brooklyn, New York, then Aurora, Illinois, then back to Brooklyn.

“It’s a way to make known my state and value our crafts overall,” she said. “Unfortunately, Oaxaca garments have been plagiarized by magazines and designers. It’s opening us new opportunities and horizons so people could know about this project and Oaxaca culture.”

With the help of Xochitl Blanca, who is also from Oaxaca but lives in New York, the women were able to come to New Haven. Blanca wanted to uplift the women who were struggling because of the pandemic and got in contact with Zacatelco.

“I know the necessities of my people because I used to live there, I know how they work, their art,” she said.

“Support our artisans because they are suffering, to see that last year during the pandemic, we were suffering from food, imagine them,” chimed in Zacatelco “At least we have help, schools giving food, but over there, they don’t. People have necessities.”

Alma Mendoza is a senior at Metropolitan Business Academy. This piece comes to the Arts Paper through an extended summer program for alumni Youth Arts Journalism Initiative (YAJI), a program of the Arts Council of Greater New Haven. This year, YAJI has remained virtual due to the COVID-19 pandemic. Read more about the program here or by checking out the "YAJI" tag.