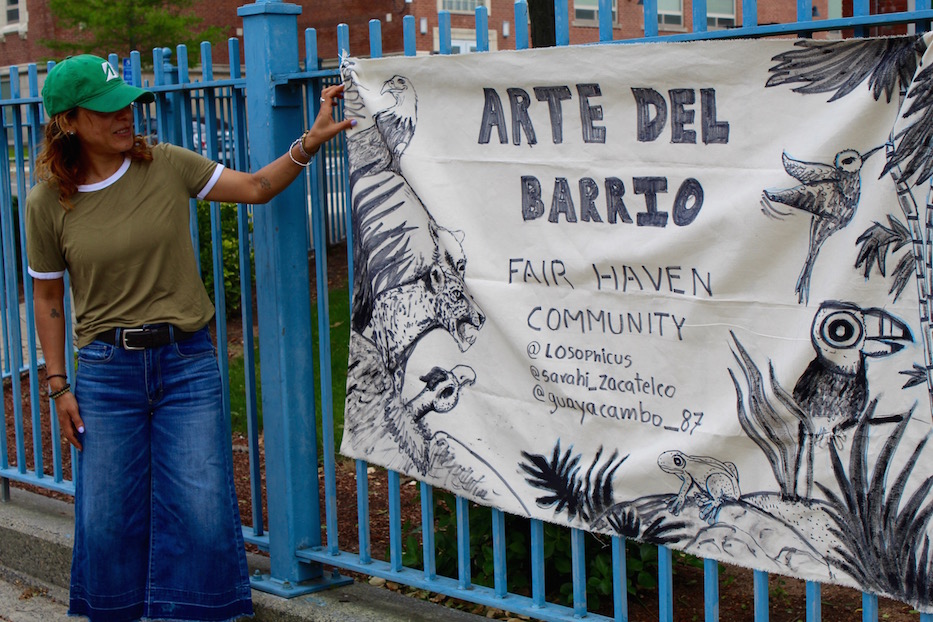 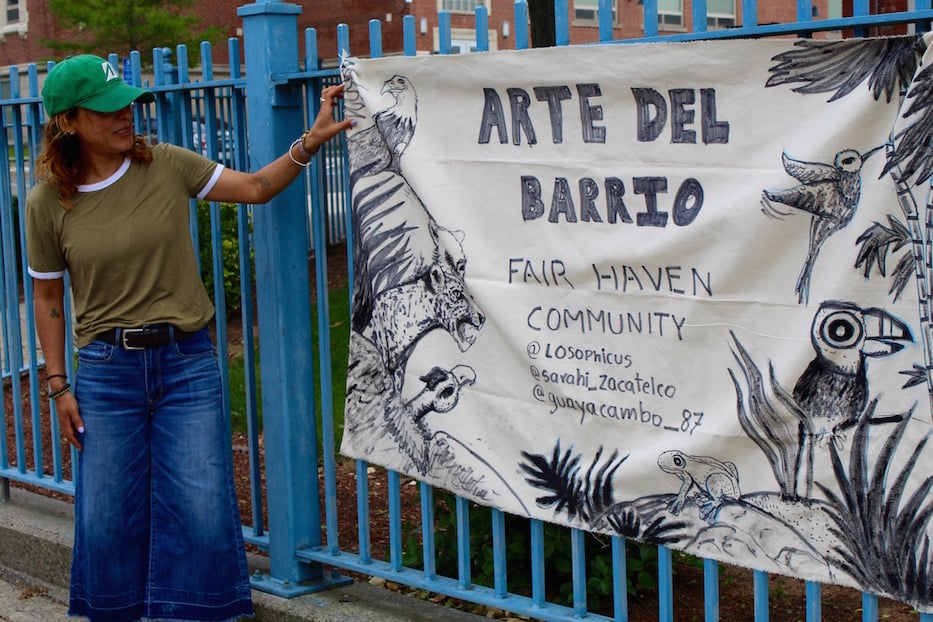 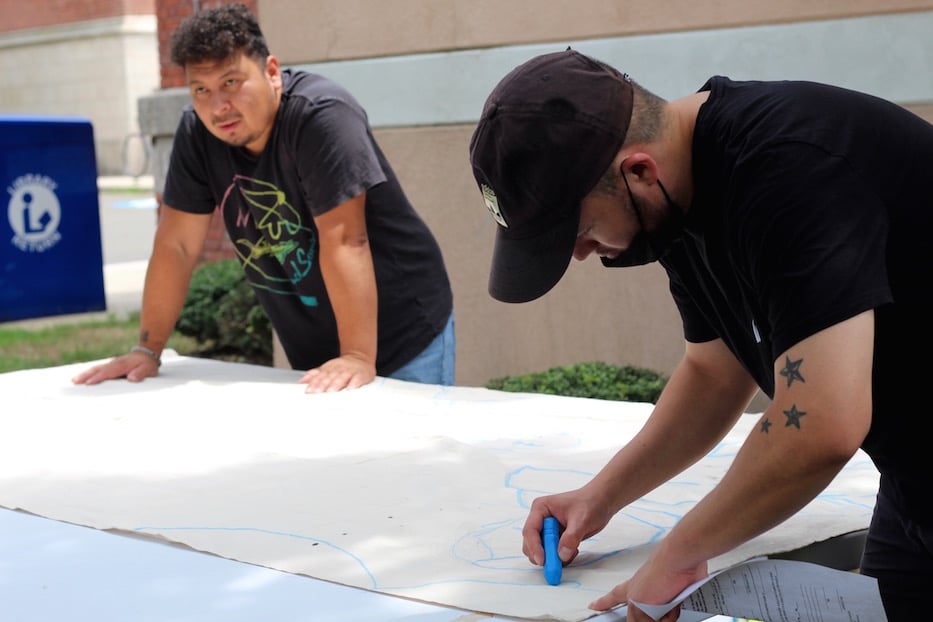 Top: Public artist Sarahi Zacatelco, who has also been working in food service through the pandemic. Bottom: Joel Celi (at left) and Israel Sánchez. Lucy Gellman Photo. Zacatelco submitted the photo of the finished banner below.

The figures appeared on the canvas one by one, springing to life in vibrant color. At the far left, a baker held out a tray of warm bread, golden at the top. A merchant steadied a flat of flowers that burst into reds and greens. A mother crouched watchfully over her son. Beside them, a yellow-vested construction worker began making his way up a ladder. A single, gloved hand reached out with a spray bottle, and tugged at the handle.

“Latinos Esenciales,” read a label above their heads, rendered in big block letters.

Saturday, artists Sarahi Zacatelco, Israel Sánchez and Joel Celi arrived at the Fair Haven Branch Library to commemorate the thousands of Latinx essential workers who have kept New Haven running—often without hazard pay, insurance, or fair compensation—during the Covid-19 pandemic. It is meant to both honor workers and memorialize those who have become ill or died of Covid-19 after contracting the virus in their workplaces. 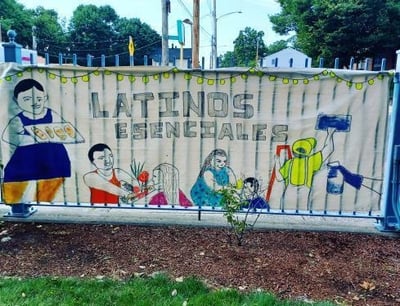 “Last year, when everyone was home, who was working?” Zacatelco said as she set up a table with brushes and bottles of brightly colored paint. “It was all the businesses here, in this neighborhood. We need to just take the time to celebrate that.”

She said that she’s wanted to do the project for months. When New Haven shut down last March, Zacatelco kept coming to her job at Tomatillo, a taco shop downtown that remained open for takeout through much of the pandemic. Almost every morning, her journey to work brought her to other essential businesses in Fair Haven—a Grand Avenue bodega for coffee, and Mi Lupita Bakery for fresh bread. She saw the buses trundle by with masked drivers and passengers who relied on them to get to jobs across the city. She said that she kept working not just for herself but for her family members, many of whom still live in her native Mexico. Whatever doesn't go towards rent and art supplies, she sends to them.

While she saw coverage praising healthcare workers, she heard less about the hands kneading dough, cleaning hospital rooms, bagging groceries, maneuvering heavy equipment, laying bricks and beams, turning out takeout meals and making the city run. In particular, her thoughts swiveled to Fair Haven, where she spent much of her childhood and still lives. Around her, Black and Latinx families were hit by the virus at a rate far higher than their white peers. Within the neighborhood’s undocumented community, whole families were also locked out of federal relief.

She checked in with Sánchez and Celi, who she met in 2013 and has been working with to beautify the neighborhood since then. Last August, the three worked on a series of painted benches on Grand Avenue together. In March of this year, they joined forces to make a banner for New York’s $2.1 billion Excluded Workers Fund. When she approached Fair Haven Branch Manager Kirk Morrison with a similar idea, the library offered its space.

Zacatelco has already worked with Morrison to get more art inside the library. Above a bay of computers, a canvas banner with the words “Arte Del Barrio: Fair Haven Community” hangs among paintings inspired by Frida Kahlo. Zacatelco said that Saturday’s piece will join it, in what she hopes is one of many creative collaborations to come. 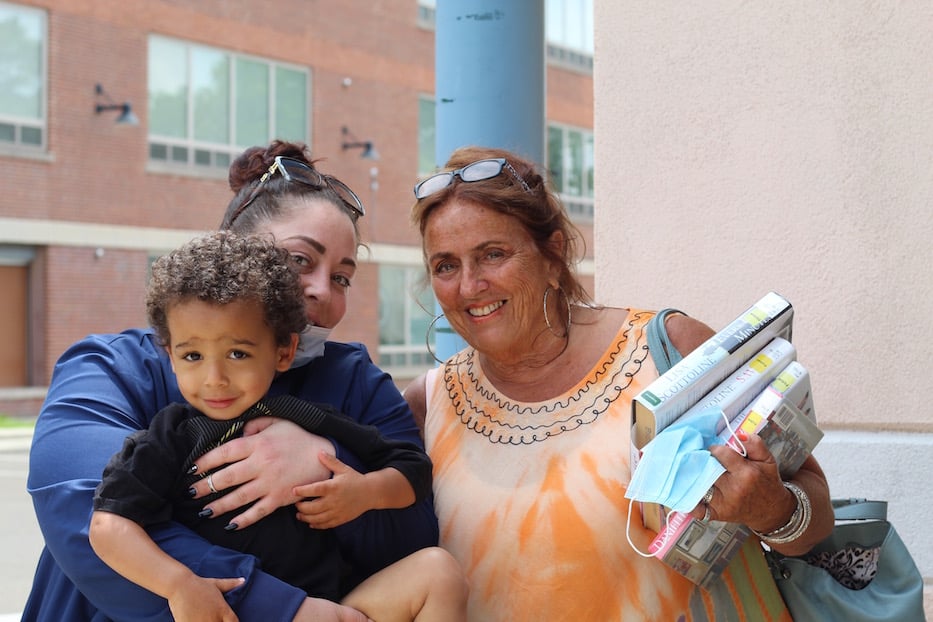 There to check out a few books, three generations of the Proto family admired the new art in the library. Cecilia Proto, an artist who grew up attending the library “since I was five” and now lives in Fair Haven Heights, said she especially likes the nod to Mexican culture. She praised the work for immediately brightening up the library, where shelves of books peek out among the gentle typing of keyboards.

“I love it,” she said as her two-year-old grandson Edmund ran up and down the library’s steps. “They should have art classes and painting here.”

“I think it’s good to have this here,” chimed in her daughter Alisha. She added that it reminds patrons to tap into their creativity.

Outside, a table waited with small canvases, round sticks of chalk and bottles of bright acrylic paint. As Sánchez and Celi arrived, the trio looked over the canvas banner and planned out their work. Celi found a speaker, and soon Sech’s “911” blasted over Grand Avenue. On a stoop across the street, a man waiting for the 212 bus started dancing to the music.

For all three artists, it’s a chance to bring attention not only to New Haven’s essential workers, but to the part of the city they call home. As a longtime Fair Havener, Sánchez said he’d like to see more citywide investment in the neighborhood and its artists. When he sees public art popping up downtown, he starts to wonder if and when it will come to Fair Haven.

He sees Fair Haven as “an underrated neighborhood in New Haven,” defined not by its ostensible danger but by its sense of tight-knit community. Instead of the place that his classmates once disparaged, he sees a neighborhood where families look out for each other and shops hold everything from hard-to-find ingredients to some of the best food in the city.

“Nobody wants to come to Fair Haven,” he said. “But this is where people live! We feel that the Hispanic art movement here is not very prominent. We all have our own jobs, but we want to do this … to show that these people are essential.”

Pulling the canvas snugly across a table, the three drew out figures in freehand, using chalk outlines before opening the paint. Celi, who moved to Fair Haven from Ecuador when he was 13, watched a narrative take shape across the cloth. He pointed to where the mother and son would go, tracing their outlines in the air as Sánchez held out a small pencil rendering that he’d done beforehand. The three made changes in real time, folding in bakers, construction workers, and parents. 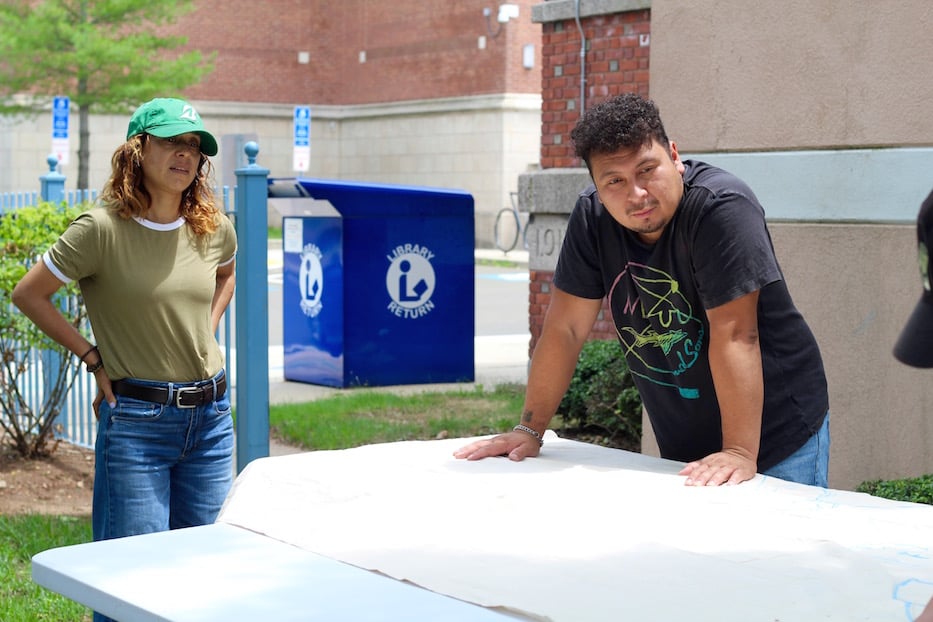 Zacatelco asked Sánchez if he remembered the rendering of a cleaning lady that he had done in March. He sketched out an arm, holding a bottle of disinfectant spray with a long glove to protect the skin. It could have been Nora Garcia, a Fair Haven resident and volunteer with Unidad Latina en Acción tasked with cleaning rooms at Yale New Haven Hospital in the earlier months of the pandemic. She died of Covid-19 in February of this year.

Zacatelco waved to a family passing on the street, asking if they wanted to join in. She motioned them over to the table. When a few women stopped to chat outside the library, she showed them the banner taking shape just a few feet away.

“This is saying, what about us?” she said. “We are essential.”

To find out more about events at any branch of the New Haven Free Public Library, visit their website.