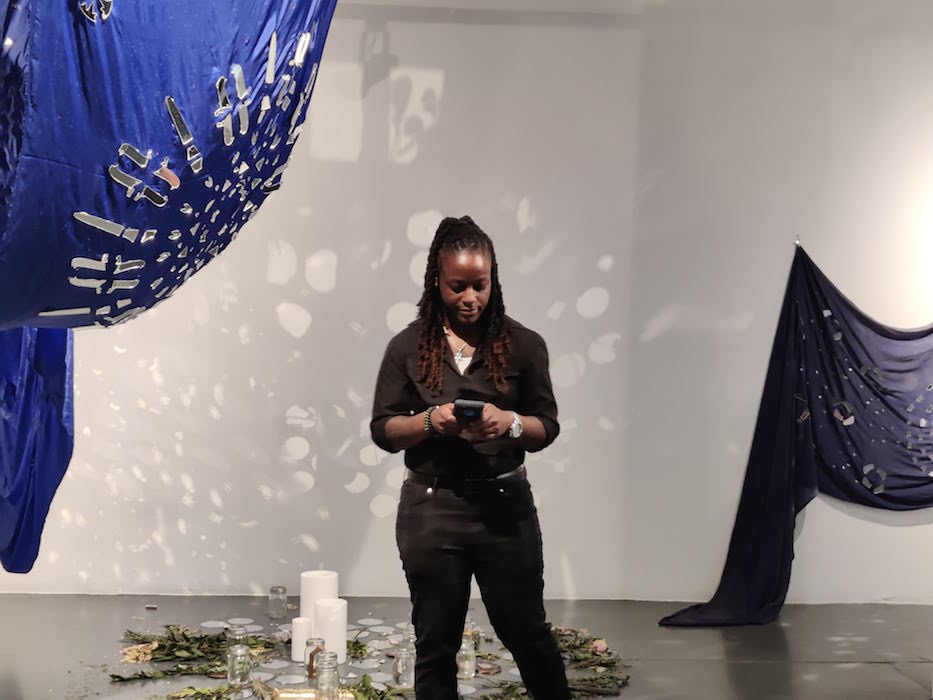 On the tip of his toes, shoulders hunched close to his ears, he outlined his toddler’s effect on time. Head hanging, arms to his side and palms face up, he described their immunity to pressures that accompany time—to be fast, to allow time to set limits for goals, to fear its forward march.  He called them “the most human of humans” for being unconstrained by it, being a master of it.

“You are not one to base your identity on what you do, or how quick,” he read.

His toddler promptly teetered to the front of the listening crowd. Jafferis, not missing a beat, scooped his child up in his arms and looked into their eyes. Time stopped.

Saturday, Jafferis was one of five poets to perform live at “Words In Our Time,” a collaboration between Artspace New Haven and the International Festival of Art & Ideas celebrating Artspace’s exhibition Dyschronics and the Festival’s “One City, One Read” series. The title comes from the idea of time with the experience or pace set by the digital or Western world. This year, “One City, One Read” is celebrating Octavia E. Butler’s Parable of the Sower. 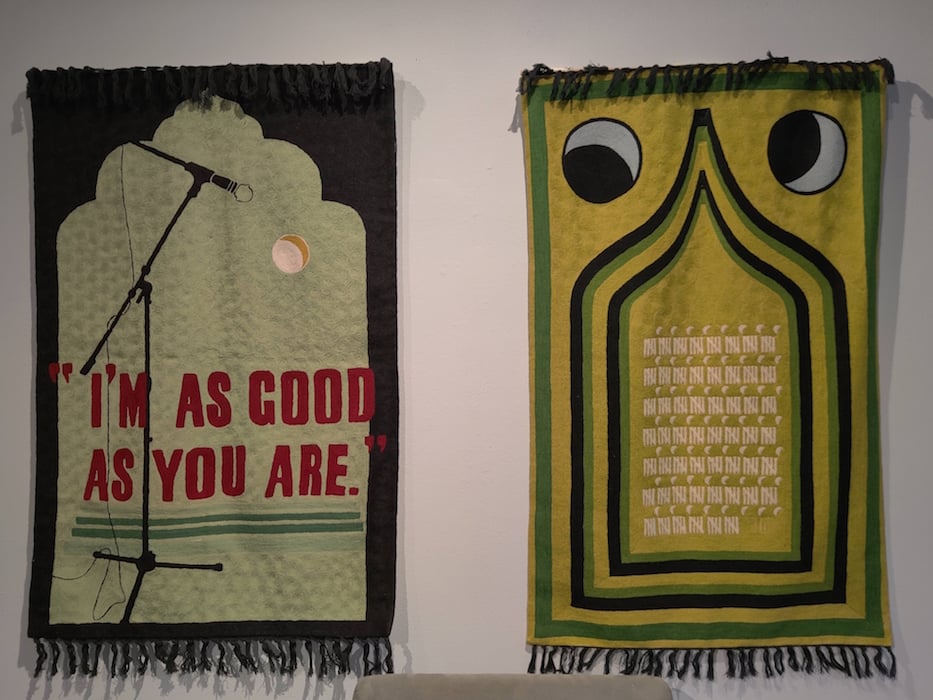 The reading included poets Jafferis, Anne Gogh, Ivy a.k.a. Poiison, Sun Queen, and Josh AnUrbanNerd Brown, each commissioned to write and recite poems in response to the pieces on display in Dyschronics.

Sitting on the flooring, leaning on the wall, or poised on a chair, attendees listened to the poetry while drinking wine and enjoying warm food, surrounded by the art that served as the poems’ inspiration. While all poets were all challenged to write loosely about time, the poems expressed vastly different experiences and ideas. Poets’ presentations conveyed different moods, moving between the galleries as they shape-shifted, slowed, and sped up.

In the same 10 minutes Jafferis recited his poem about his time-stopping toddler, he explored his Scottish identity and his ancestors’ fraught relationship with Native Americans, dwelling on the latter’s skillful and beautiful stewarding of land over time. Along with his word and pace of speaking, Jafferis used his body—particularly his hands—to carve out in space the shape of the idea he formed in the listeners’ minds with his word. 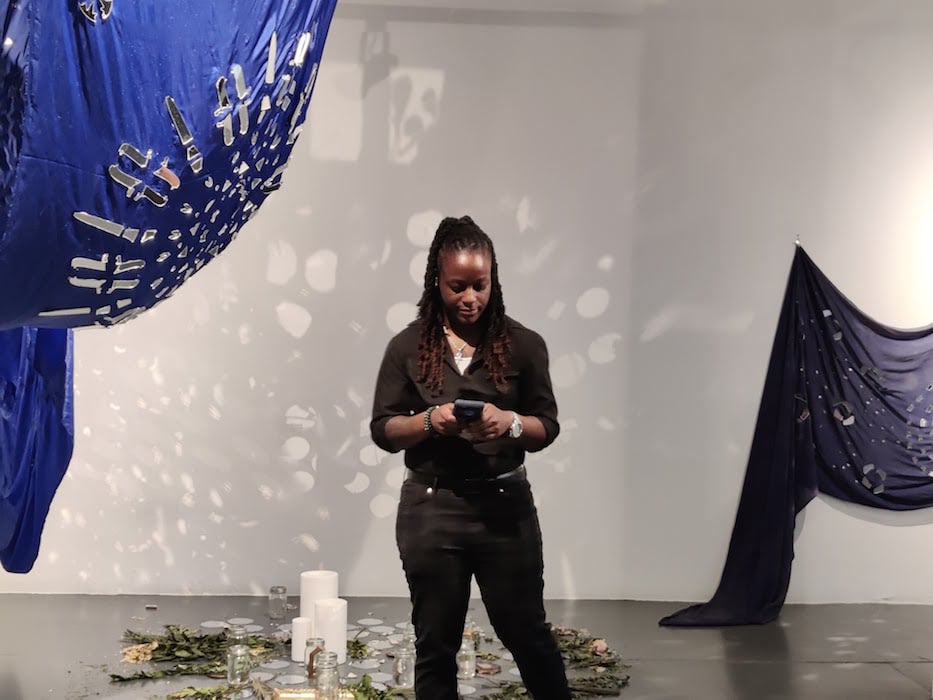 Poiison recited her poem “Star Spangled,” calling to mind and memorializing in time victims of police brutality. She walked the audience over to another gallery, where to a stunned-silent audience she read-rapped a poem about anger and forgiveness, damaging sexual relationships, and mental health all revolving around her relationship with her mother.

“Dear birth mother, how could you birth a daughter that doesn’t even know ya?” she began. “One day your daughter realized she was beautiful. You gave birth to an angel and she’s stronger than you, mentally stands taller than you. Even though she has thought of you, she rarely ever talks to you. Then she wrote, ‘Dear birth mother, I forgive you.’” 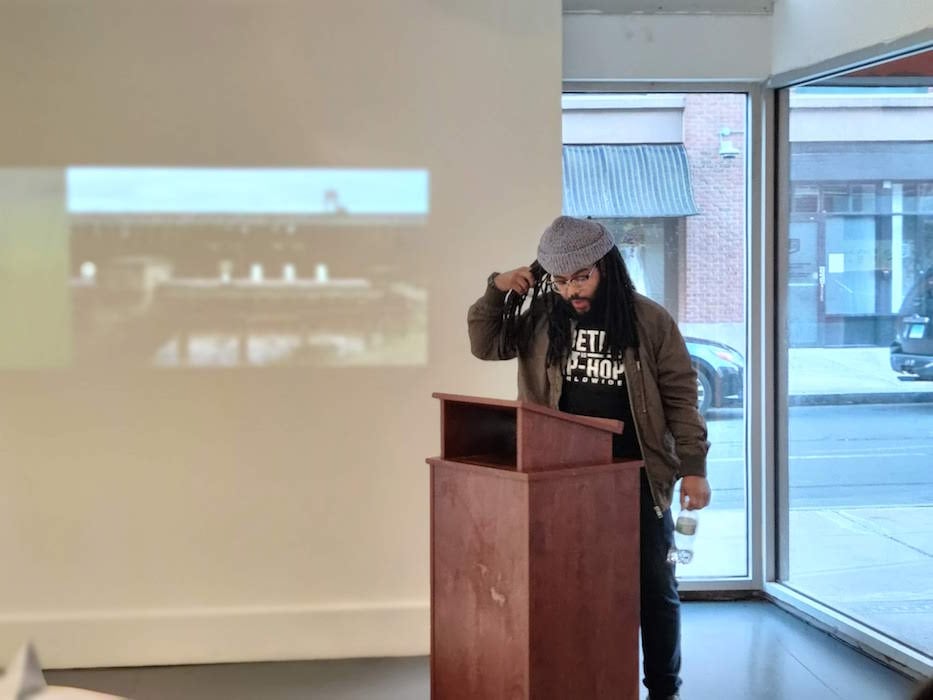 In Gallery 4, Carolina Caycedo’s To Stop Being a Threat and To Become a Promise was a backdrop to AnUrbanNerd’s matter-of-fact delivery of poems, referring to Dragon Ball Z and Ben10 alongside corruption in the construction industry. He energized attendees, who were enraptured by the use of the pitch of his voice and the movements of his whole body. It came like an earthquake from the bottom of his feet to the top of his head, mimicking Goku’s signature move, the Kamehameha.

Sun Queen, who is known both as a poet and as one of the founding organizers of Black Lives Matter New Haven, shared her poems in the gallery where Baseera Khan’s prayer rugs hung elegantly, weightily on the walls. Her poems focused on empowerment, especially of Black women. She engaged her audience by speaking to them, and later asking them to speak affirmation to themselves. They included “I am as good as you are,” which is a phrase stitched onto a prayer rug that was displayed in the gallery.

“I wrote a lot about prayer in my poems mostly because I am always praying,” she said. “I wouldn’t call myself a religious person — even though I did grow up in the church — but I pray all the time. I pray affirmations over myself, I pray for the things I know I deserve, and I pray for others’ self-knowledge of worth and beauty.”

To close the night, all of the poets stood in a line and completed the phrase, “Time is ..." For some, time was a “construct.” For others, it was “deceptively unchanging.”

“Time is,” Sun Queen sighed and thought about her final answer. Then she laughed.  “Time is what you make of it.”

Dyschronics is open for the public at New Haven Artspace until April 16. Click here for video from the event.