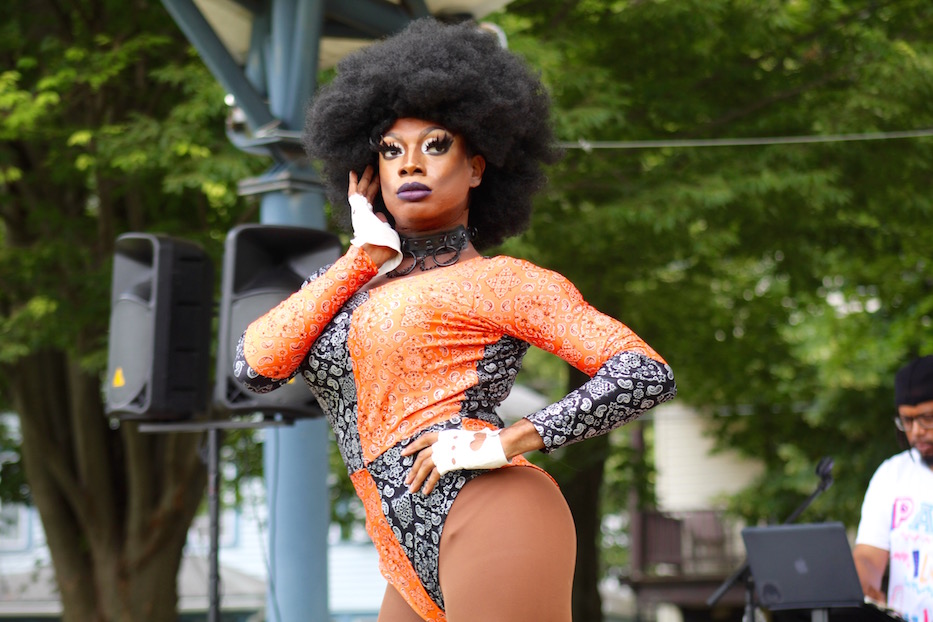 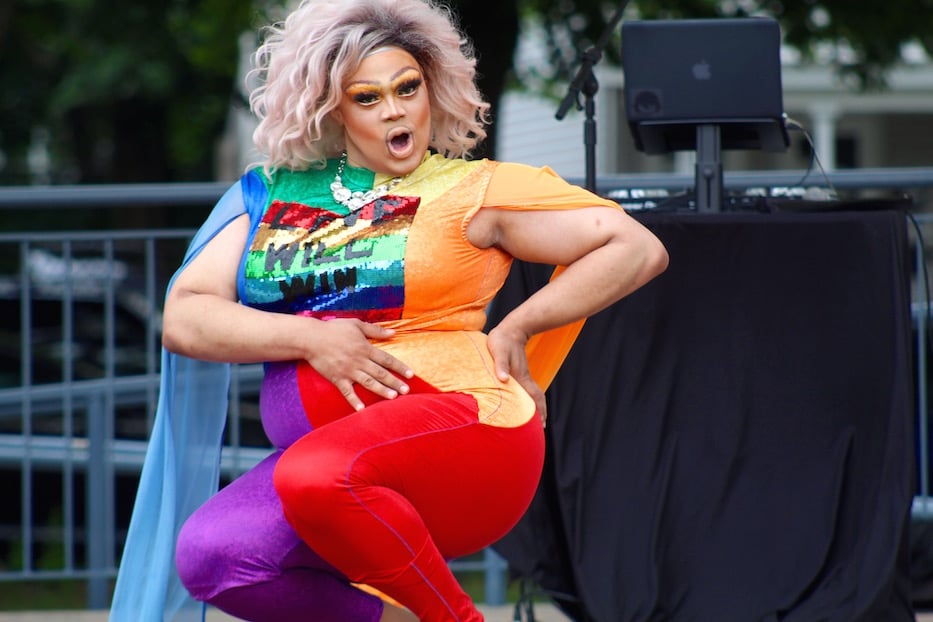 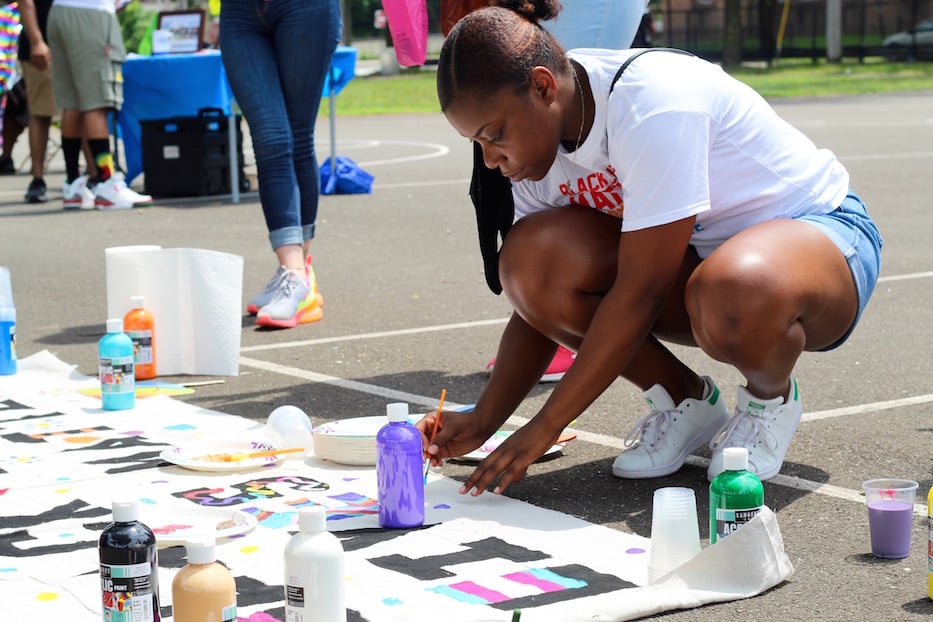 Gabriel Francis began to vogue, his body nearly in flight. Tyler Jackson stood in the wings, waiting as a pulsing beat played across the park. A current ran through his body, surging until he could no longer stay still. In every movement was a history of queer Black resistance.

Francis and Jackson put on that performance Saturday afternoon in Goffe Street Park as part of the second annual Connecticut Black Gay Pride.

Love and liberation were the orders of the day—and visible in every move the two dancers made—as over 100 people turned out to the joint celebration of Pride Month and Juneteenth. Organized by A Place To Nourish Your Health (APNH) with support from several community partners, the event fused dance, drag, poetry, and public health as it unfolded on one side of the park. The long blue Community Health Care Van parked nearby for the afternoon, offering free Covid-19 vaccines.

By early afternoon, the basketball court was awash in rainbow and black, green and red balloons, with vendor booths from APNH, Anchor Health Initiative, the New Haven LGBTQ+ Youth Task Force, and several small Black-owned businesses. A free clothing closet from the Party For Socialism and Liberation (PSL) sprawled out across the grass on two tarps. Just feet away, attendees and members of Anchor Health painted a bright banner that read “Black Trans Lives Matter.” Kendall Driffin, who described herself as an ally, crouched down to leave her mark in thin lavender strokes. 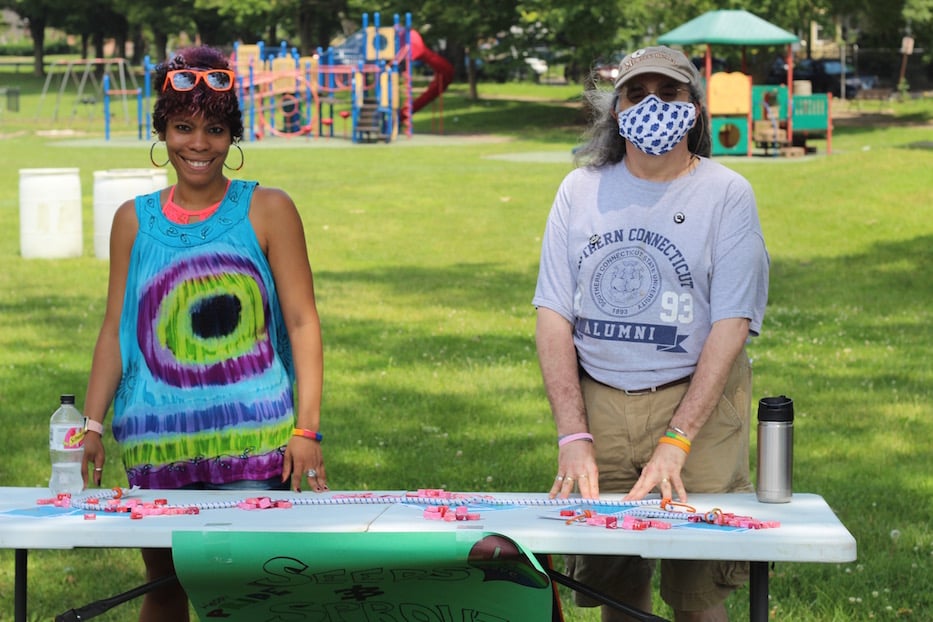 At a small table covered in bright literature and pink Starburst candies, Jane Carter talked to passers-by about Seeds and Sprouts, a growing collective of mental health professionals and social workers dedicated to bringing social justice and access to care into New Haven’s mental health system. A clinical psychologist at Yale Health, Carter said she made sure the group had a presence at Black Gay Pride because she knows firsthand that Black people, and especially queer Black people, are more likely to be shut out of care than their white peers.

“We are interested in anything that touches the surrounding community,” she said, raising her voice over Doja Cat’s “Say So” as a few attendees danced to the beat. She handed out fliers to the group’s new “Consciousness Raising” workshops, which are currently focused on getting law enforcement out of mental health care. 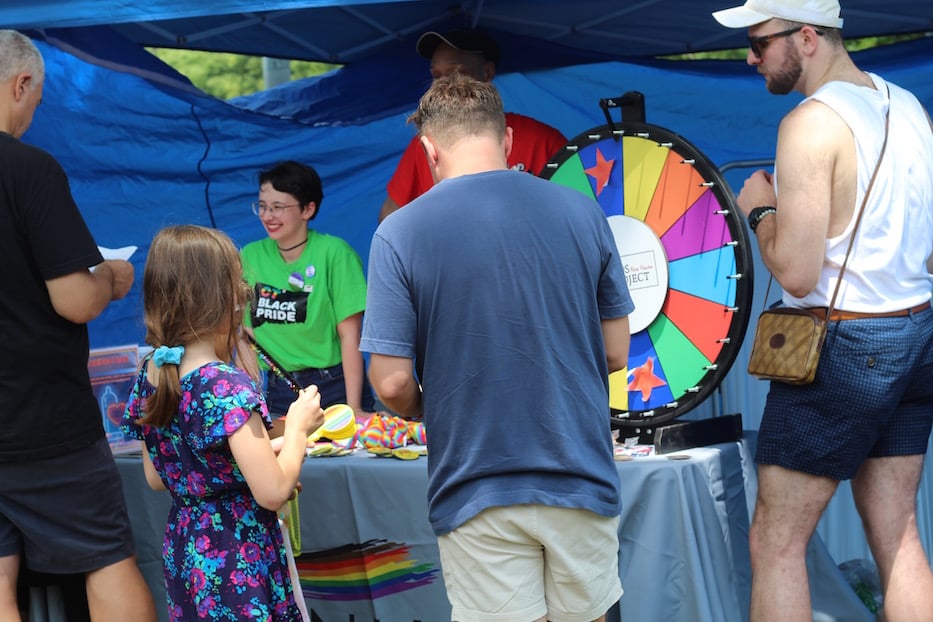 Mel Defilippo (in the green shirt) and Letrell Floyd at the APNH tent.

Across the court, APNH staff members Mel Defilippo and Letrell Floyd handed out rainbow-printed swag and tiny stuffed animals between free, rapid HIV testing. In the past 16 months, the organization has pivoted largely to telehealth and at home HIV testing, which it is able to do by mail. Defilippo said that the two were excited to be back in the park after over a year of online programming. Beside them, a rainbow-colored wheel beckoned brightly, asking attendees to come closer.

“I’m excited for everyone to come out, to take a rapid HIV test, to know their status,” Floyd said. 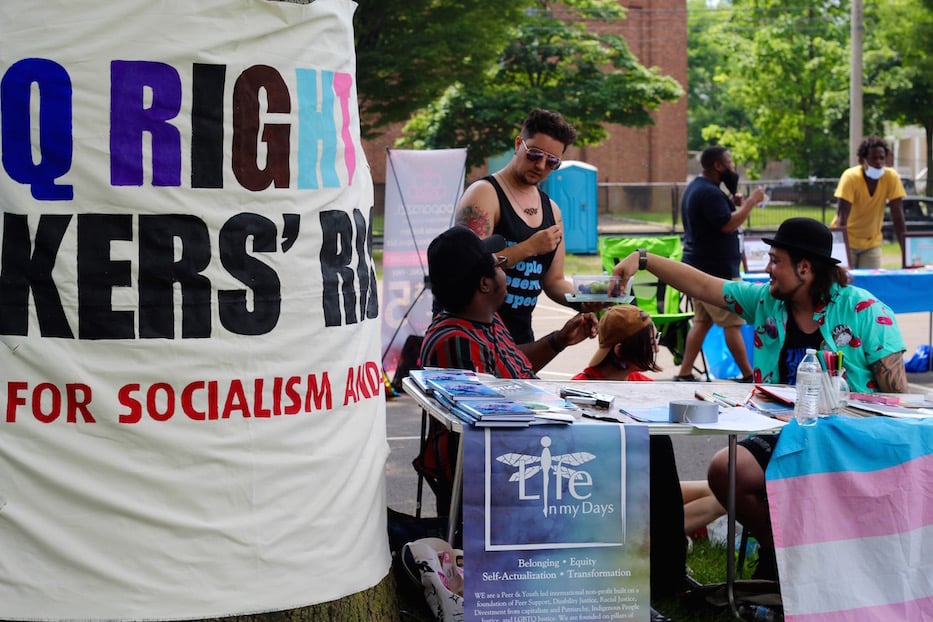 Elsewhere, performers prepared to take the park’s stage. Beside a table for PSL and Life In My Days, multimedia artist and newly minted 24-year-old Dyme Ellis ran over their rap lyrics and examined neat rows of pins that glittered in the sunlight. A lifelong New Havener, Ellis said that they were excited to be there—even though they are largely skeptical of Juneteenth’s newfound fame as it becomes a federal holiday.

“We are still crushed by capitalism,” they added. “I hope people feel inspired to do better. We need to be celebrating and living Black liberation every day.”

No sooner had they spoken than LaBeija took the stage in a leopard-print bodysuit. In front of her, mothers stood beside their grown children, some sporting bi and trans pride flags. Kids played on the grass. Girlfriends waved doll-sized rainbow flags while they held hands.

Couples cuddled on the bleachers in all manners of multicolored gear. Photographer Linda-Cristal Young stood near the front of the crowd, ready with her camera and rainbow-patterned mask. Her eyes crinkled at the edges in the shorthand for a pandemic smile. 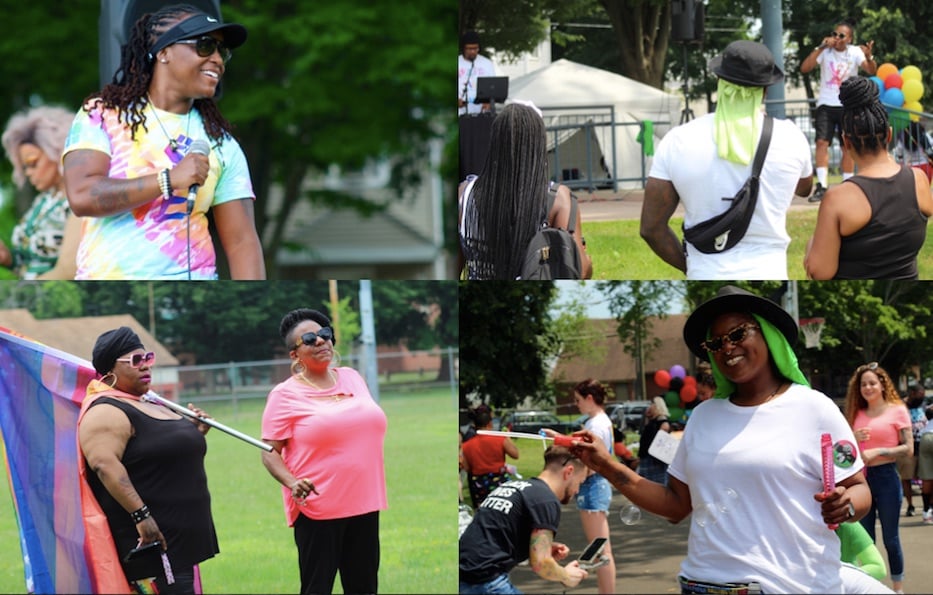 “Love!” the crowd bellowed back.

“Matters!” yelled the crowd in a jubilant polyphony.

Through drag, poetry and dance, performers gave a crash course on the ways that Black and queer liberation are intimately bound to each other, reaching back to pull out lessons from 1866 all the way to 1977. From a tent behind the stage, Kenya Mone Heart strutted out in a glittering leotard and long black boots with heels as thin as toothpicks. Joel Corry x MNEK’s “Head & Heart” soared over the stage, and suddenly her whole body was a live wire.

Her arms flew into the air as she glided across the concrete.  The chorus hit, and she sunk into a duckwalk, bouncing on the da da da da dum dum of the beat. Cries of “You better get it!” and “Werk!” bubbled up from the crowd, as some attendees approached the stage with dollar bills. For many there, it was the first time seeing live drag in over a year. 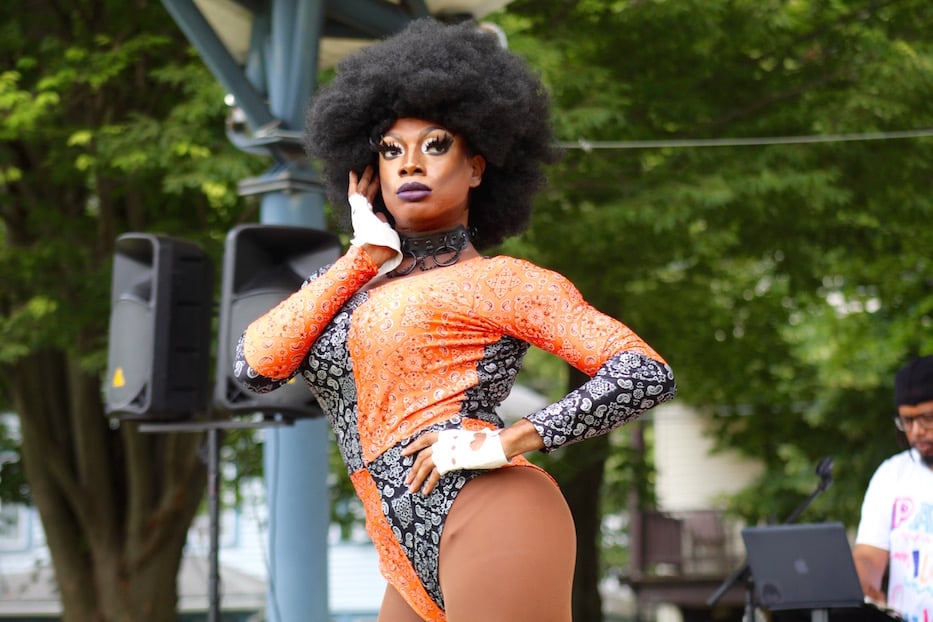 Reading between queens Heart and Sparkle Diamond, poet Ivy Poiison told the story of a woman who fell in love with her mind, keeping listeners hanging on to her every word. After pausing to introduce herself in between pieces, she took apart “The Star-Spangled Banner,” cracking open Francis Scott Key’s lyrics for her own interpretation.

In each of Key’s stanzas, she uncovered what she sees as a much more complicated country. She memorialized victims of police brutality, taking time to say the names of Eric Garner, Philando Castile, Michael Brown, George Floyd, Trayvon Martin, Tamir Rice, Breonna Taylor, Natasha McKenna, Atatania Jefferson, Michelle Cusseaux, Kathryn Johnston, Riah Milton and Kayla Moore. She turned the imagery of the flag on its head. 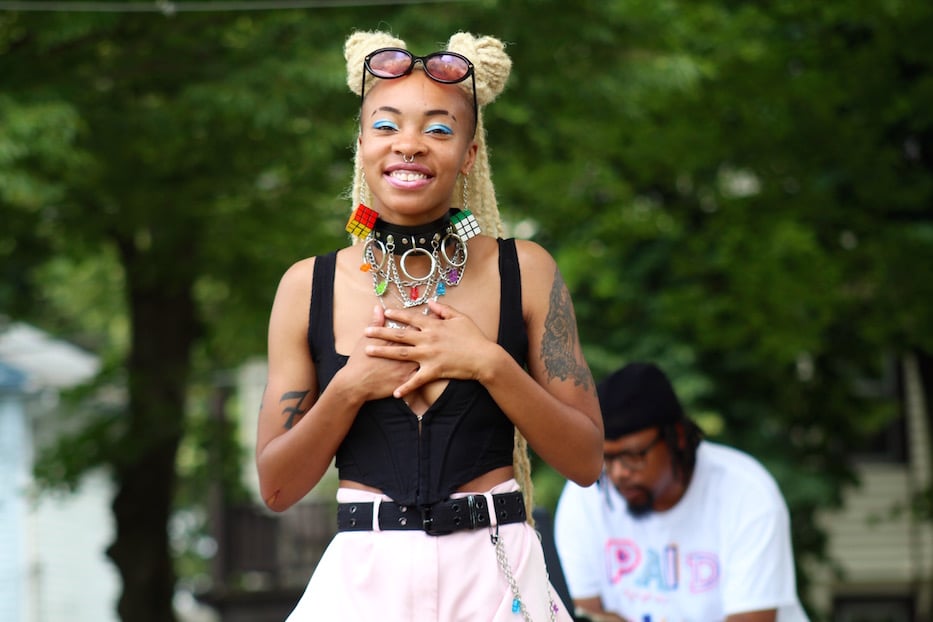 Dyme Ellis, who rapped and then grooved to an unexpected birthday serenade from the audience.

Ellis came to the mic with back-to-back raps, attendees clapping to keep the beat when their music wouldn't work and they went a cappella. They segued from a blistering takedown of their cynics to an ode to the city that raised them. “Hail the almighty from the 203,” they began, and the crowd cheered. As they moved to the lyrics, rubik's cube earrings swayed from their ears.

“Some days I just wanna up and leave/But I’m anchored to the tempo when I catch that beat,” they continued. “It’s like the beat catch me.”

When they finished, Queen had a surprise for them. After a few false starts from attendees, the DJ blasted Stevie Wonder’s “Happy Birthday.” Queen sang along as Ellis danced.

“Come on y’all!” Queen said. “We’ve been locked up in this pandemic in the house all year! You better move! One tap! Two taps! Y’all can do a little shimmy? It’s a great day to be alive. We made it. Another year around the sun.”

A grill sizzled on the other side of the stage, where husband and wife duo Arlene and Wesley Bellamy turned out hundreds of free hamburgers and hot dogs with fresh buns, condiments and slaw. Around them, the smoky-sweet smell of summer filled the air. After hearing about the event, Arlene said the two were excited to come out and cook.

Beside her, Wesley flipped another fleet of burgers and hot dogs. After learning to grill years ago, he started the YouTube channel Valerie’s Smokehouse as a way to teach others. The two had backup: her daughter, daughter-in-law, and grandkids stood ready to help nearby.

Back on stage, Francis and Jackson dipped—literally—into the history of voguing. As soon as the beat dropped, they held the stage, arms, wrists, ankles, torsos and legs in constant motion. At times, they moved in unison, feet so fast it seemed like they had wings. They studied each other to figure out when to come in. LaBeija beamed and cheered them on from the side of the stage as she watched. 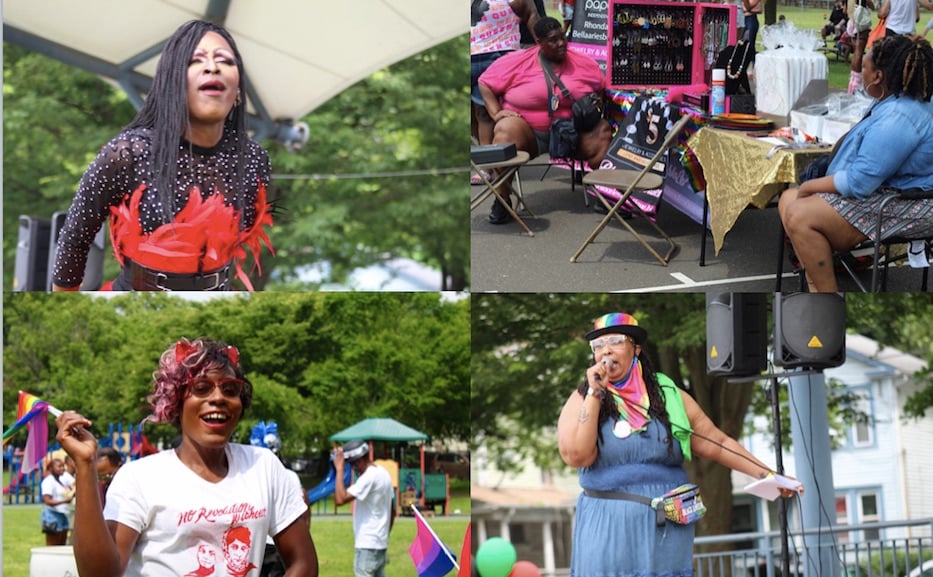 Clockwise from top: Sparkle Diamond, one of the Black-owned businesses to set up, organizer Sun Queen, and attendee Karleigh Webb.

“That was vogue,” she said before doing a routine set to work by Hartford-based poet Versatile Poetiq. “Did you know that vogue did not come from Madonna?”

With Francis, LaBeija traced voguing back to the legendary house system and ballroom culture of the 1970s and ‘80s. She shouted out the House of LaBeija, which Crystal LaBeija founded in 1977.

Francis noted that the history—the sum of which he said is not to be confused with the hit show Pose—is rooted in Black queer and trans resistance. It isn’t a relic of the past, either, he added—balls still take place across the East Coast. There’s a new generation carrying on the legacy. 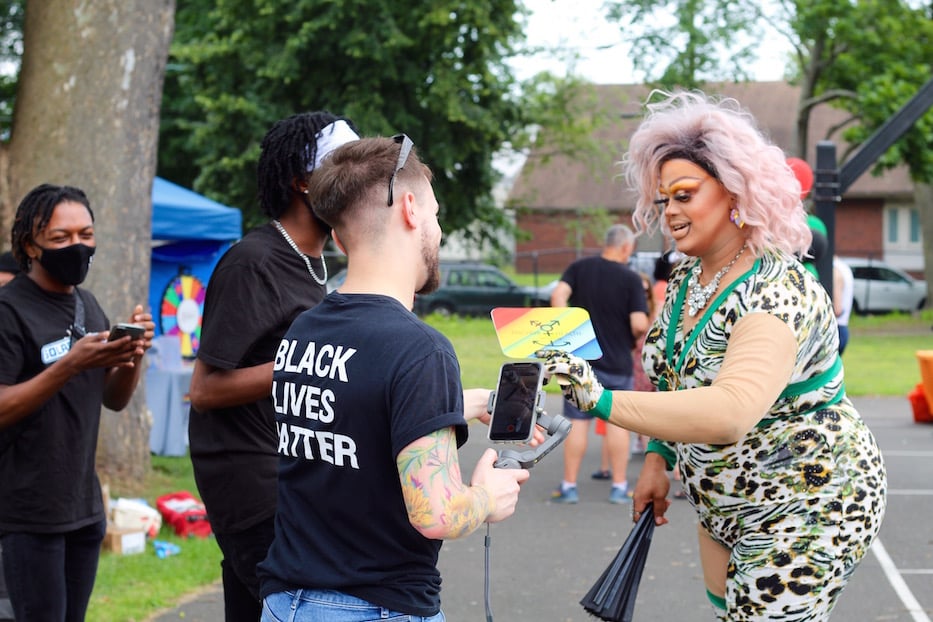 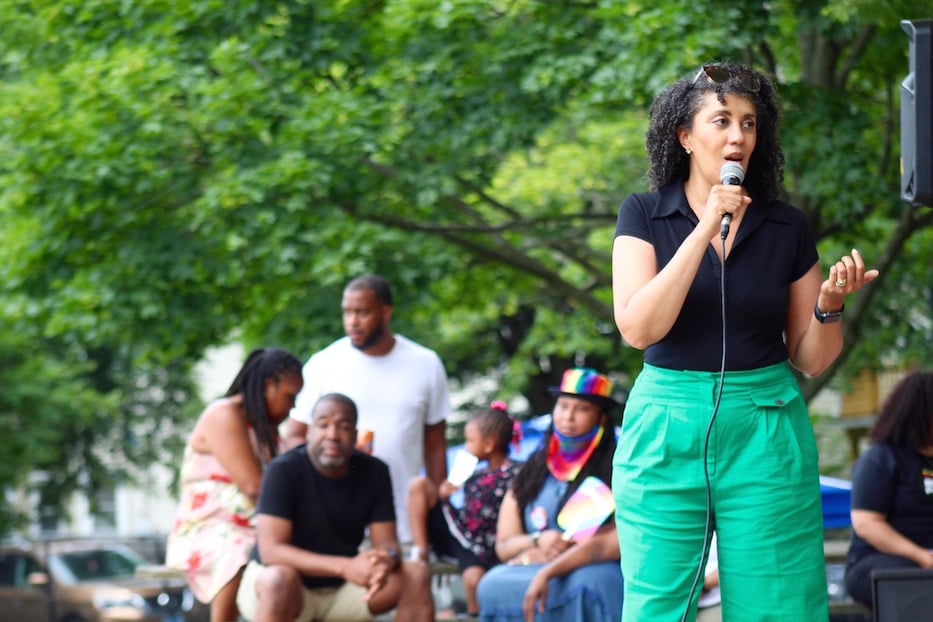 After poetry and ukulele serenades from musician Jeri Thompson, mayoral hopeful Karen DuBois-Walton also joined the lineup. She wove a line from public safety and public education to economic opportunities for artists and small businesses owners, many of whom had vendor booths in the lot. She urged attendees to register to vote, knock doors, and get their peers interested in the upcoming election.

“I fell in love with New Haven for what it was and what it can be,” she said. “I’m so pleased to be with you on Juneteenth, celebrating Black Pride today, because this is New Haven.”