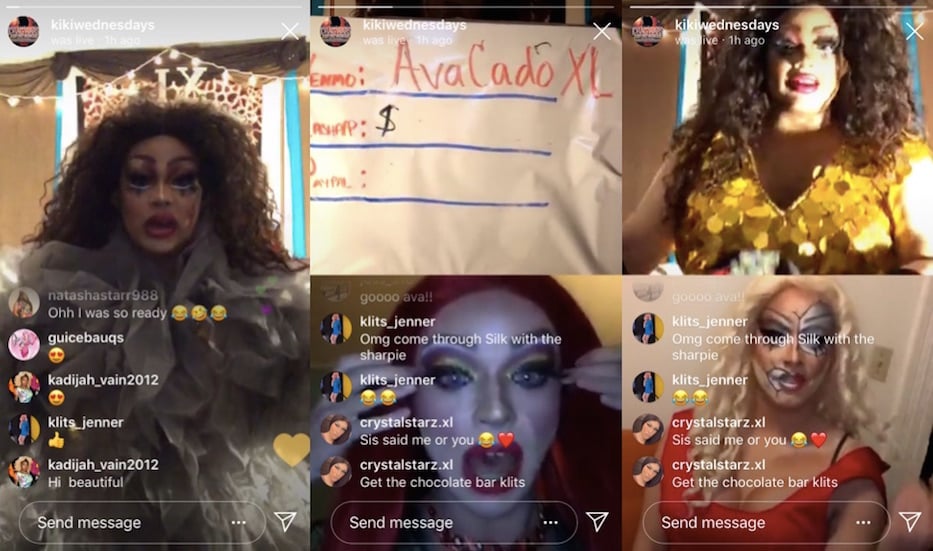 Xiomarie LaBeija looked right into the screen, eyelids fluttering. Behind her, white lights twinkled above a window. The walls glowed butter yellow. She patted her forehead with a paper towel and checked her thick makeup one last time. When she stood, viewers could see her full-length robe, a creamy, luminescent getup with huge ruffles.

“Honey, are you ready?” she asked. Ike and Tina Turner waited patiently on her playlist. There was a beat. “I think I’m ready. Let’s do this.”

LaBeija—as in, the legendary House of LaBeija—is the host of the XL Show, a new weekly performance series intended to highlight and benefit drag artists of color and their accomplices. Held on Facebook and Instagram Live each Wednesday, the show brings in drag artists from across the region, as well as those based elsewhere in the country. Viewers can follow it at Kiki Wednesdays on Instagram or Facebook.

“Representation matters,” the Hartford-based queen said in a recent phone interview. “If we can continue spreading love, that's the best. But in our society, we have to recognize that there are different colors of love. Drag gives me the strength to spread that message—to be able to tackle it in a way that almost doesn't feel like a burden.”

In its early stages, the XL show was meant to exist in physical space. Before the pandemic, LaBeija was building out a show with the same mission at Ekko Bar & Lounge in Holyoke, Mass. She chose the name because the letters represent both her drag persona and her body positive approach to the form—she proudly self identifies as a plus-size queen and “I like to represent the curves, honey!”

She loved her time at the bar, she said. On the first Wednesday of March, she hosted a “drag wars” themed program that went into the wee hours of the morning, drawing hollers and applause for much of the evening. She assumed that she would be back in April. But a week later, shutdowns were rippling through the region instead. Ekko shut its doors.

As the realities of COVID-19 set in, “I had to figure out a way to get this online.” Drag is one of LaBeija’s three part-time jobs, and one of two that has been drastically reduced or cut during the pandemic (when closures hit Connecticut, she also lost work as a chef). During the day, she still reports to work at a family-owned grocery store in Hartford, where she works in the produce department.

It has become a new landscape, she said: the store is busier than it has ever been, and the stakes feel higher. She is constantly making sure her hands are sanitized and her gloves are on. When she gets home in the evenings, she peels off her clothes, leaves them in a specific part of her home, and gets immediately in the shower.

Hers is a story that has become increasingly common among working artists, and especially artists of color: a gig worker suddenly down one or two incomes, with a service job that still requires her to put her body on the front lines. Coronavirus has also hit her personally: since the start of the virus, she has lost two friends to suicide and an extended family member to the virus.

As she talked to drag performers in her orbit, she heard different iterations of that story over and over again. Some were out of work entirely. Others were reporting to essential jobs, but had lost thousands of dollars in drag performances. She worked with Ekko to move the series online, where she also still hosts Drag Wars once a month. She praised promoter Chiino Rios for his continued work in helping her with the series.

While it is free to watch, LaBeija urges viewers to tip performers via Venmo and CashApp if they can afford to do so. She is adamant in the show’s mission: to support not only the drag community, but specifically Black and Brown drag artists who may have been overlooked well before a global pandemic shut down clubs, bars, and performance venues.

“It boggles my mind that you can see a flyer for a show every week and, with all do respect, it's all the same complexion and the same faces,” she added. “And yet we have so much melanin, so many beautiful sisters and brothers.”

Her guests, from the beginning, have reflected that mission. During the show’s premiere in late April, LaBeija welcomed Springfield-based queen Damela Cuca DeVille, warming up viewers beforehand with a number to LeToya Luckett’s “She Ain’t Got” that included a rhinestone-studded bat and tight, sparkling black leotard with matching black garter belt.

DeVille is a Puerto Rican queen, based in Springfield, Mass. As music pumped from the screen, her body rotated against a half-lit white wall a state away. Shadows danced and vibrated: curly, mocha-colored hair mid-whip, shoulders mid-bounce, arms that rose toward the ceiling and kept going. In between numbers, the two caught up in bite-sized pieces of information.

“I’m a little out of breath, but I loved every second of it because I haven’t danced for a while,” DeVille said afterward. She added that the pandemic has exposed her to “the myth of certainty” with which many Americans, including herself, had been living. Now, she doesn’t know the next time she’ll perform for a crowd that isn’t through a screen. Nobody does.

LaBeija and her guests do not hide from the fact that this is drag in relative isolation. Because of the online platform, everything is out in the open: numbers are punctuated with heavy breathing and real-time technical glitches. There are frequent references to lost income, solo confinement, and an inevitable stir craziness.

On a recent episode, New Haven queen Kiki Lucia—who is New Haven Pride Center Director Patrick Dunn “when I’m not wearing all this bullshit”—described how she had broken out in full body hives from anxiety.

But if this is LaBeija’s strange new normal—a community of hundreds watching on their phones and computers, as just two people interact with each other—she’s rolling with it. In the first episode, other guests included Montrisha La Taina and Chicago-based bodybuilding queen Miss Toto, who has described herself as a barrier-breaker in “the hypermasculine world of fitness.”

She makes a point of talking to the performers about both how the crisis has affected them professionally, and how their bodies were often under siege before a global pandemic. In the first episode, for instance, DeVille “stated to me that she wanted to represent and I was like girl go off,” LaBeija recalled.

In part, she added, the performances are part of a larger shift that she’s hoping to create in the drag landscape. Even before coronavirus-enforced closures swept the region, she saw a region where queer spaces were still highly segregated. She watched as drag artists of color had more trouble getting reliable work than their white counterparts.

“It's been a constant struggle being a person of color,” she said. “In real life, we always see situations of racism. When it comes to talking about the LGBTQ+ community, no one wants to go there. They cover it with glitter and unicorns so we don't have to have a conversation.”

So she’s spreading the gospel of representation, even if it’s only online for the foreseeable future. She said that if she can use performance to spread that message, there’s no reason not to. She has also served as a point of contact for members of the LGBTQ+ community, including during a recent makeup tutorial for mPowerment New Haven.

“To be told that you can be the light to someone motivates me to do what I do,” she said. “I feel like this could possibly be the beginning of something new. I am completely open and ready to receive what is ahead of me.”