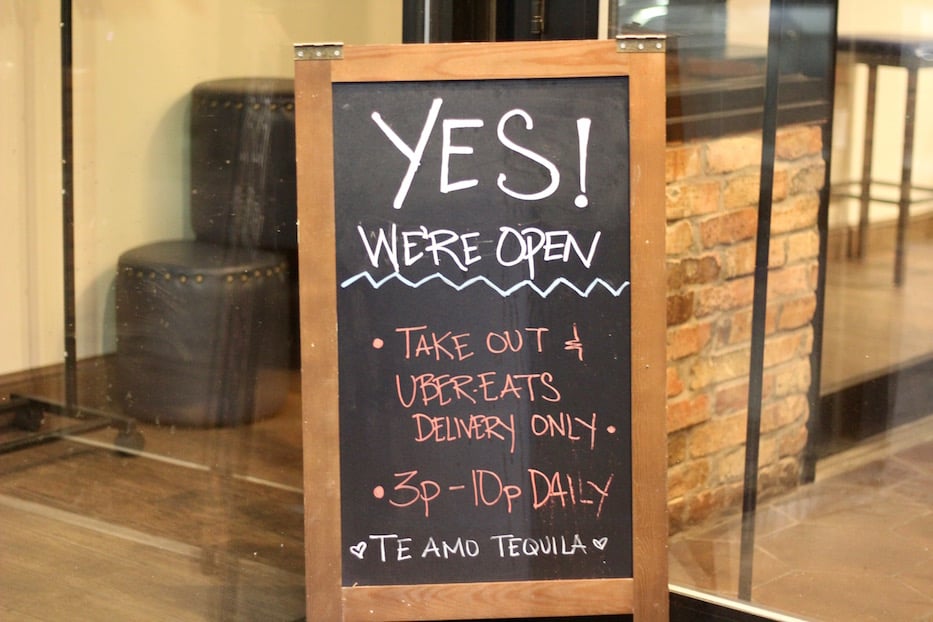 Restauranter Sonia Salazar planned to spend this Thursday raising money for HIV awareness, prevention, and care. Instead, the organization behind that work will be raising money for her—and dozens of other local business owners affected by COVID-19.

That organization is A Place To Nourish Your Health (APNH; formerly AIDS Project New Haven). In late March, it announced that it would be throwing its support behind local restaurants on April 23, which would have marked its 14th annual Dining Out for Life.

The gesture is intended to raise money for restaurants that have been supportive partners to the organization, and are now crippled by COVID-19 closures across the state and the country. APNH has put a particular focus on those still offering take out and delivery, including Te Amo Tequila, 116 Crown, Christopher Martins Restaurant & Pub, House of Naan, and over a dozen others.

“I don’t think right now is the time to be asking restaurants for support,” APNH Director Chris Cole said in a phone call Tuesday. “Now is the time to be supporting them. We’re in our 14th year, and this should be the year when we step up. We are so grateful to our restaurants for the years of support they’ve given us, and we’re trying to push out as much information about them as possible.” 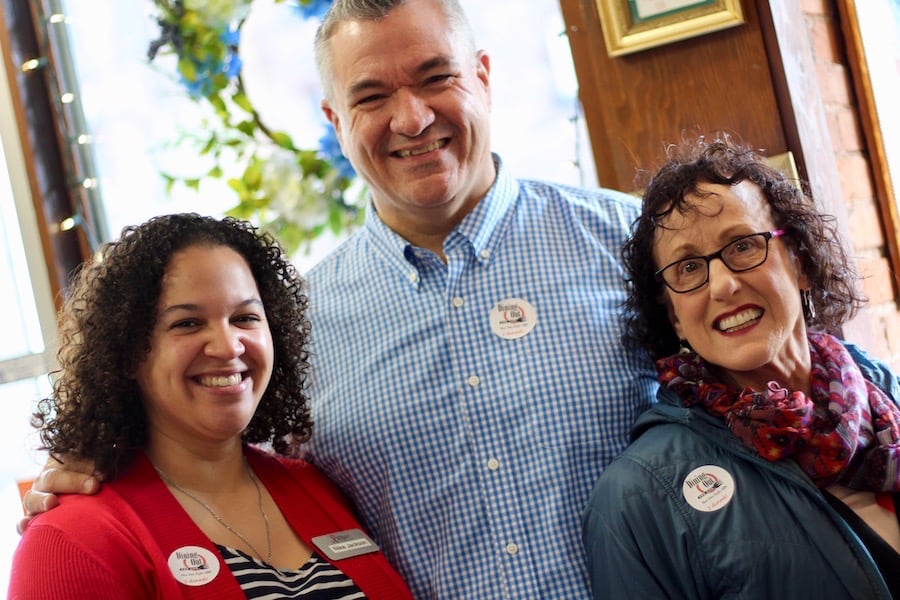 Chris Cole (center), with Nike Jackson and Fran McMullen at Dining Out for Life in 2018. Lucy Gellman File Photo.

It’s a role reversal of sorts. Typically, local restaurants participating in Dining Out for Life donate a portion of their proceeds to APNH, which uses the funding to support its weekly programming and “Caring Cuisine” initiative, which delivers meals to people and families affected by HIV. In recent years, the organization has raised approximately $30,000 per year from the event.

But in March, as restaurants closed to the public due to COVID-19, hosting the event looked increasingly unlikely. Instead of rushing to reschedule, Cole suggested that the organization use the original date to give back to a community faced with a public health crisis and little to no small business support.

He noted partners like Soul de Cuba, which has been one of the most steadfast supporters and recently suffered a break-in during coronavirus closures.

“This may be the year that we say, ‘Let’s support the restaurants,’ [even if we reschedule],” he said. “A whole lot of it is going to depend on some sense of normalcy.”

Salazar, who runs Barracuda Bistro & Bar on Chapel Street and Te Amo Tequila on Temple, welcomed the news. For five weeks, she has been reeling from a loss of business at both downtown establishments, which are normally packed with a mix of students, townies, and groups that turn out for Thursday night Salsa lessons and happy hours hosted by the New Haven Pride Center.

She is used to getting waves of foot traffic from downtown theater- and concert-goers, hotel guests, and hungry students who roll in after a long week or late-night performance. Now, that epicenter of downtown has turned ghostly and quiet. 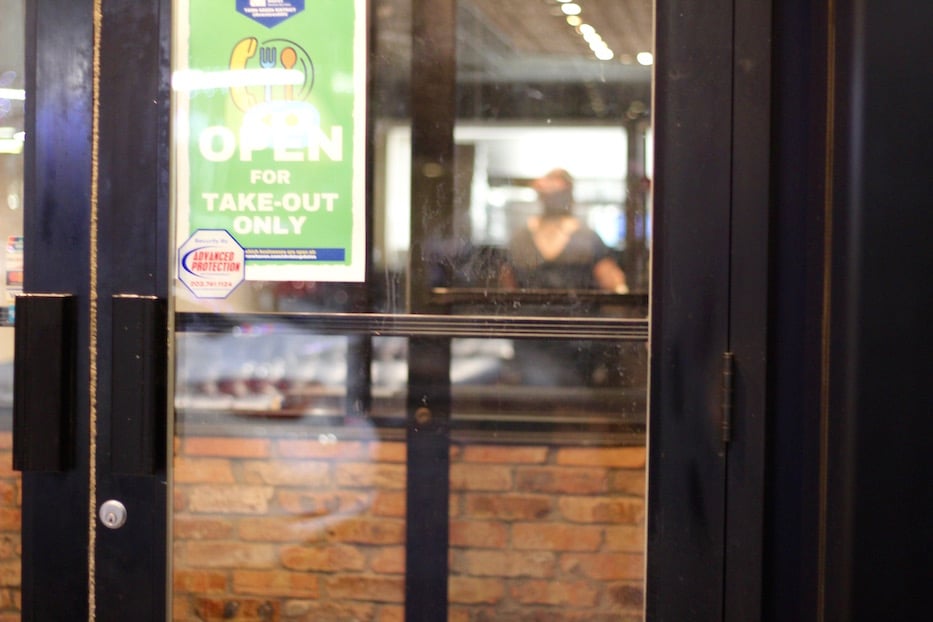 When COVID-19 hit last month, she chose to close Barracuda and keep Te Amo open for delivery. She started to struggle almost immediately: Te Amo staff went from 32 to just two cooks overnight. Apps like GrubHub and Uber Eats promised smooth delivery, but took such a large chunk out of a given payment that “it’s not like we’re making any money.” After a week, she found that there was often a shortage of drivers who were willing to do delivery anyway.

Ultimately, she said that she decided to stay open for her customers, almost all of whom are regulars who have called in and swung by for curbside pickup. She estimated that 40 percent of them work at Yale New Haven Hospital, from emergency room nurses to administrative staff. While she churns out food for them, she is waiting to see if support has come through from the U.S. Small Business Administration.

“We applied for everything,” she said. “Everything. Sometimes I wake up in the morning and think, ‘Should I even keep doing this?’ I don’t know how I feel. I just know that I have to still open. But our customers, the community, has been incredible. The support has been overwhelming.”

She added that she is sad not to be hosting Dining Out for Life this year—she has participated for the past five years that Barracuda’s been open—because she thinks of APNH as part of her New Haven family.

“We have to come back, and come back safe,” she added. “Just like everybody else, I’m hoping it gets back to normal, so we can all have a mojito in style and say ‘wow, that was horrible, but we’re back.’’”

It comes at a time when COVID-19 has also pushed APNH to move the majority of its services, which are focused on HIV awareness, prevention, and care, online. In early March, the organization was one of the first to set up staff to work remotely, from telehealth to online support groups and increased social media. By mid-March, it announced that it was no longer offering in-person appointments for most services.

It formed a COVID-19 response leadership team, which met remotely every morning until it was running smoothly enough to meet remotely twice a week. Two of its flagship support groups, mPowerment New Haven and Aging Positively, moved from meeting once or twice a week in person to meeting daily online.

The first, an “HIV prevention and social program” for LGBTQ+ men between 18 and 29 years old, has leaned heavily on the arts, with weekly drag queen makeup tutorials and movie nights that break up guided discussion and new concerns and questions from members. The second, for adults over 50 living with HIV, has moved to five days a week and seen a rise in membership.

Cole suggested that some Aging Positively participants who may have been unlikely to show up before, whether due to a physical problem or social anxiety, have fewer concerns when they are able to do it from their home.

The organization has also sent out dozens of at-home HIV test kits, which Cole hopes is a sign that people are staying at home and taking action on their health. Staff has moved almost all appointments to telehealth services on Doxy.me, Zoom, and phone, which have gotten heavy use from clients working to navigate quarantine and isolation. Cole said it isn’t always easy to provide, but often remains the safest option for both clients and providers.

While the organization has lost anticipated income from cancellations—Dining Out for Life, a Bowl-A-Thon that was scheduled for the end of March, its mPowerment Gala and Gay Black Pride in June—it has received funding that will allow it to keep going during this time. 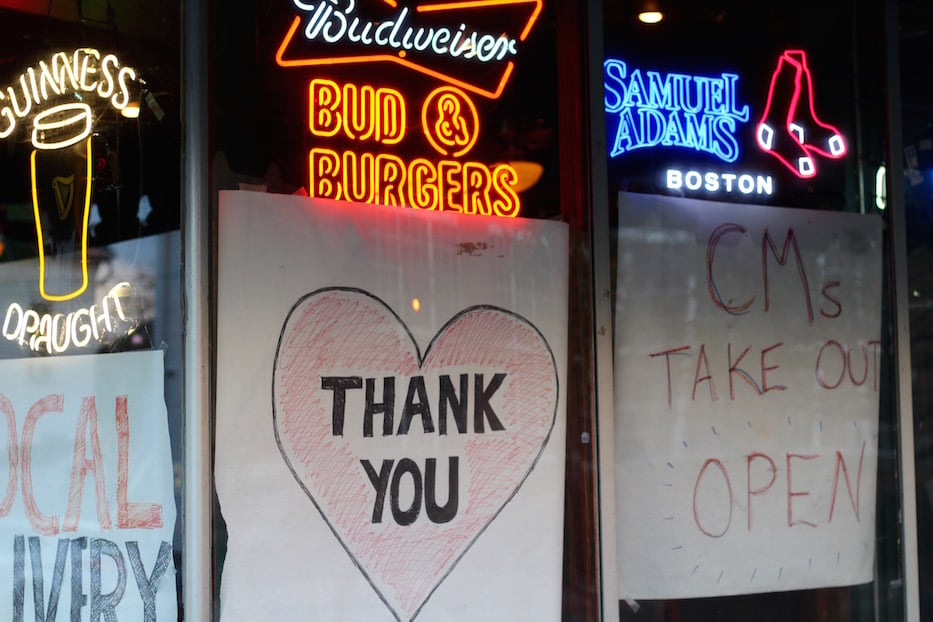 Christopher Martin's, which is still serving take out from State Street.

Because it provides essential healthcare services, its Chapel Street headquarters have remained open with a skeleton crew on-site, who are providing access to the organization’s emergency food pantry. To limit exposure, the pantry is now giving out grab-and-go bags, which contain twice as much food as they did before.

APNH is also still continuing its Caring Cuisine program, which Cole suggested may be more important than ever in a time of increased social isolation and limited mobility. He added that between now and when things reopen, the amount of online programming and healthcare has given the organization new ways to think about connecting with clients.

“We are an organization that was built on providing kind and compassionate and loving care to people with a virus, and we will continue to do that no matter what the virus is,” he said. “The question for us is: How do we make sure that we’re getting our word out to clients to make sure that they’re taking care of themselves? And at the same time, doing it with as much kindness, compassion, and bravery as we always have dealing with folks who have HIV.”

“The biggest thing that’s been on my mind is: How long is this gonna last?” he said, adding that he’s been reading about the 1918 flu pandemic. “ Will we ever be back to normal? What is the new normal?”

To find out more about A Place To Nourish Your Health, visit the organization’s website. A different or rescheduled Dining Out For Life event later this year is still to be determined.