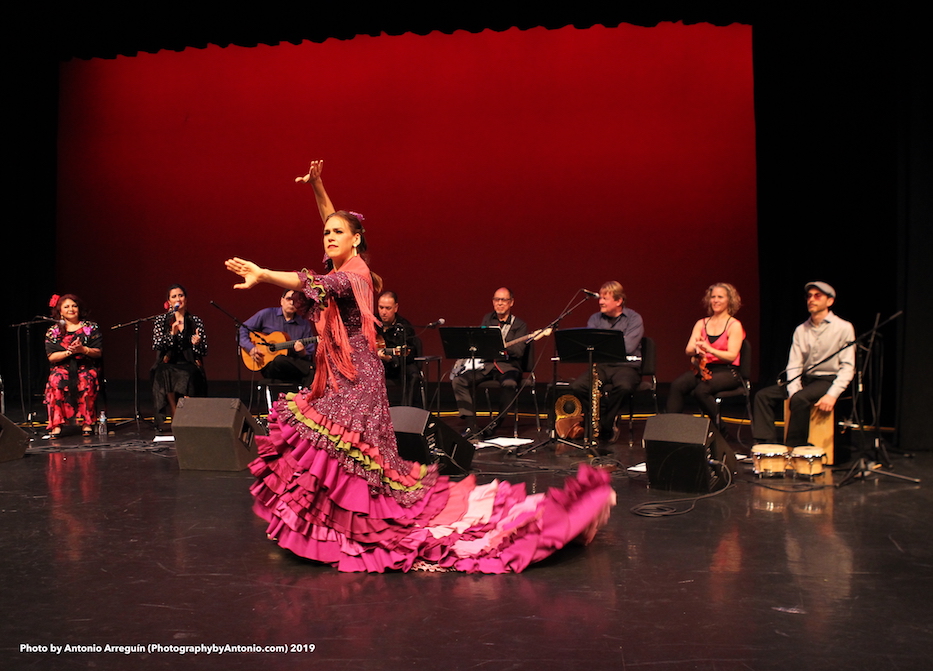 Shoes tapping, propulsive strings and intense clapping struck the audience of the Val Ramos Flamenco Ensemble as members celebrated their 25th anniversary concert, Flamenco Passion!, at the Educational Center for the Arts (ECA) earlier this month.

The concert celebrated the classic flamenco and modern flair that the ensemble has been bringing to life for over two decades in Connecticut and across the country. Originally from the Southern parts of Spain, Flamenco is a Spanish art form comprising guitar, song and dance. Long after its conception and evolution in the 14th century, it made its way to an auditorium on Audubon Street, where the ensemble heated up the stage.

They perform again later this month in Hartford; more information is available here.

As Barbara Martinez began to sing, dancer Rebeca Tomás moved across the stage, her skirt swishing with each note. The two created a delicate back-and-forth for other members of the ensemble: every time Tomás began to tap or dance faster, the music picked up, strings and percussion lifting to meet the vocals. With every clap and strum of the guitar, the music flowed as fluidly as Tomás moved her body.

As she danced, the audience could see how the music and lyrics flowed through each person on stage. Ensemble members wore intense facial expressions, sometimes closing their eyes or bobbing their heads with the instruments. A propulsive clapping carried the rhythm throughout every song. Tomás’ shoes stuck the stage, echoing the sound. She lifted her bright, ruffled skirts to show the footwork, moving from side to side and occasionally shouting in time with the musicians.

For both Val Ramos and his brother José Ramón Ramos (who is also a flamenco guitarist with the group), performances like Flamenco Passion! give them a chance to celebrate and honor the art form, while adding their own musical footprint to it. Although the brothers were both experienced Spanish music while growing up in Puerto Rico, it wasn’t until they were in the South Bronx Community Action Theatre Program in New York that they were exposed to Flamenco culture.

In those years, Val Ramos said he saw it as a way for people to stay out of trouble and gangs. After learning about Flamenco in the program, he started to perform guitar. He traveled around the city, gigging where he could and looping in his brother. Gradually, he became a master of a style called of Nuevo Flamenco, a modern twist on traditional flamenco that brings in various Afro-Latino influences and the same virtuosic guitar and dancing for which the original form is known.

“It was many years of collaboration, creativity, always experimenting with new things,” he said.

In the past decades, he has produced two original albums of Flamenco music, toured both parts of the U.S. and Spain, and performed at several music and jazz festivals, including the International Festival of Arts & Ideas in New Haven and Regattabar Spring Jazz Festival in Boston. While he is frequently playing elsewhere, he has chosen to make Hamden his home.

He said the ensemble came out of a desire to incorporate a new feel into an old, revered and historic culture of song and dance. While he and José are the only flamenco guitarists in the group, the ensemble also comprises vocals, dance, violin, bass, saxophone, flute and percussion.

“They are learning with us,” Val Ramos said. “And we are learning how they integrate with us for music in the future.”

The Val Ramos Flamenco Ensemble will perform again later this month in Hartford, outside Burr Mall by the Wadsworth Atheneum. For more information and upcoming events, visit the group's website.