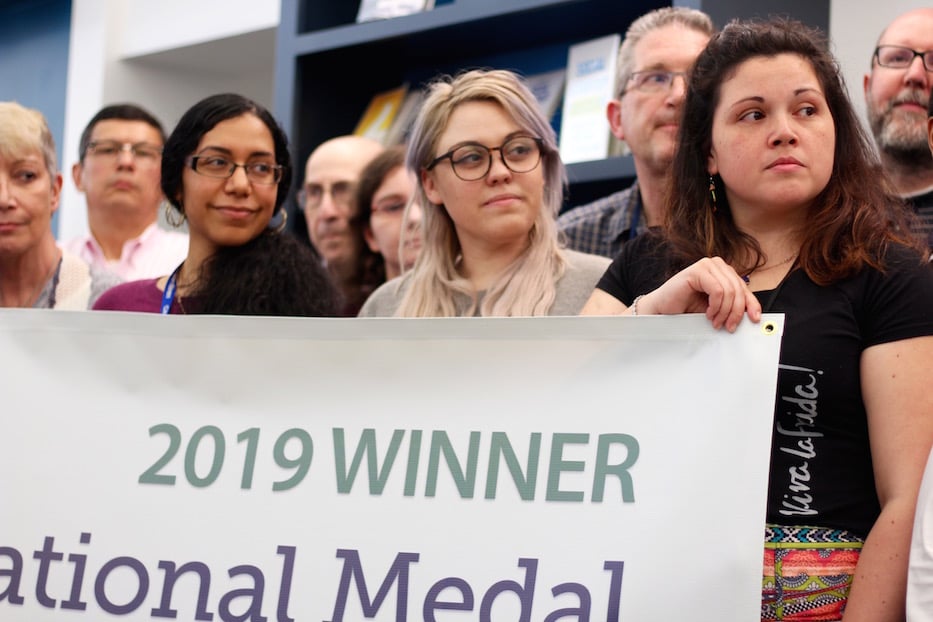 This year, the NHFPL joins other institutions including the Jamestown S'Klallam Tribal Library in Sequim, Wash., Inter-university Consortium for Political and Social Research in Ann Arbor, Mich., the Gulfport Public Library in Gulfport, Florida, National Civil Rights Museum at the Lorraine Motel in Memphis, Tenn. and the South Carolina Aquarium in Charleston. Read the complete list here.

“We are thrilled to receive this award, which honors our 132-year legacy and early attributes that still ring true today: a welcoming front door for all, a fighting spirit to serve as the people’s university, a catalyst for civic improvement, a drive to innovate tempered by fiscal restraint, and a love of humanity,” wrote City Librarian Martha Brogan in a press release before a press conference Tuesday afternoon. 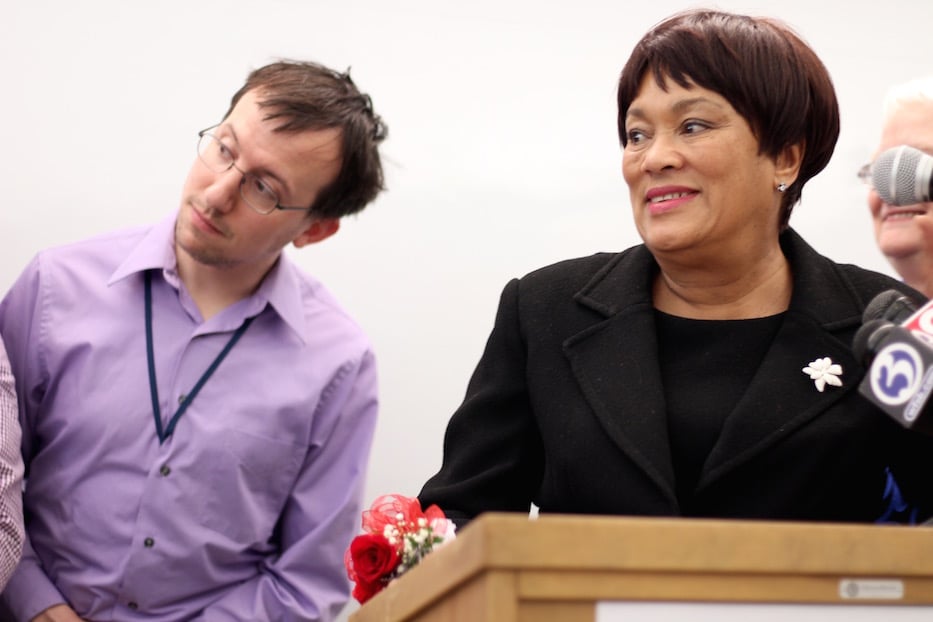 The medal comes in recognition of the library’s role in the community, and specifically the number of community partnerships it offers at each location. When working on the application, Brogan said she and staff emphasized three of those partnerships, highlighting the “READy for the Grade” program with NewAlliance Foundation, ongoing collaboration with Long Wharf Theatre, now in its seventh year, and new Ives Squared innovation commons and cafe. The third was made possible by funding from the Elm City Innovation Collaborative (ECIC).

The application process began with a nomination from U.S. Sen Chris Murphy, who could not be at the press conference but sent a message (and a representative from his office) congratulating the library on the win. Later this month, Brogan will travel to Washington, D.C. to receive the award in person with Fair Havener and library champion Nilda Aponte. As she spoke Tuesday, Brogan called library staff to the front of the space, grinning as people crowded in.

“I don’t want you to get the idea that we have a really large staff, because we don’t,” she said to laughs from attendees. “What we have is a really mighty staff, and they have come from across the city to be here today.” 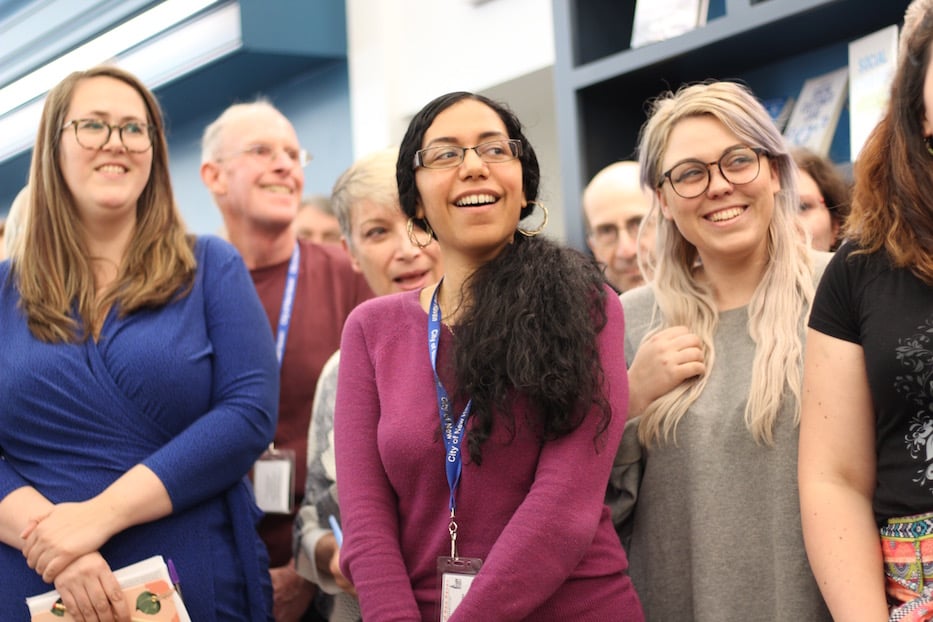 The NHFPL was established by city charter in 1886 to fill the needs of New Haveners who belonged to neither Yale University nor the Young Men’s Institute Library. It opened the following year with a first building on Chapel Street. It has since spread across the city, spurring weekly community events, site-specific theater, computer and English as a Second Language (ESL) classes and even tax prep at five branches in Fair Haven, Dixwell, the Hill, Westville, and downtown.

“You may think it’s easy to do the work that they do,” said Mayor Toni Harp, who brought on Brogan in September 2014 and feted longtime librarian Marianne Carolla two weeks ago at the city’s 381st birthday celebration. “But they are the most culturally attuned department in the city of New Haven. They have to deal with people in all walks of life, and they treat them with respect.”

“They make them feel welcome no matter where they come from,” she continued. “Whether they are homeless. Whether they deal with behavioral issues. Every single day, they reach out and they provide not just what they have learned … with their hearts. They extend that to our citizens. For that, I couldn’t be prouder. I couldn’t be more grateful to all of you for sharing your heart, your intellect, and your belief in the citizens of our city.” 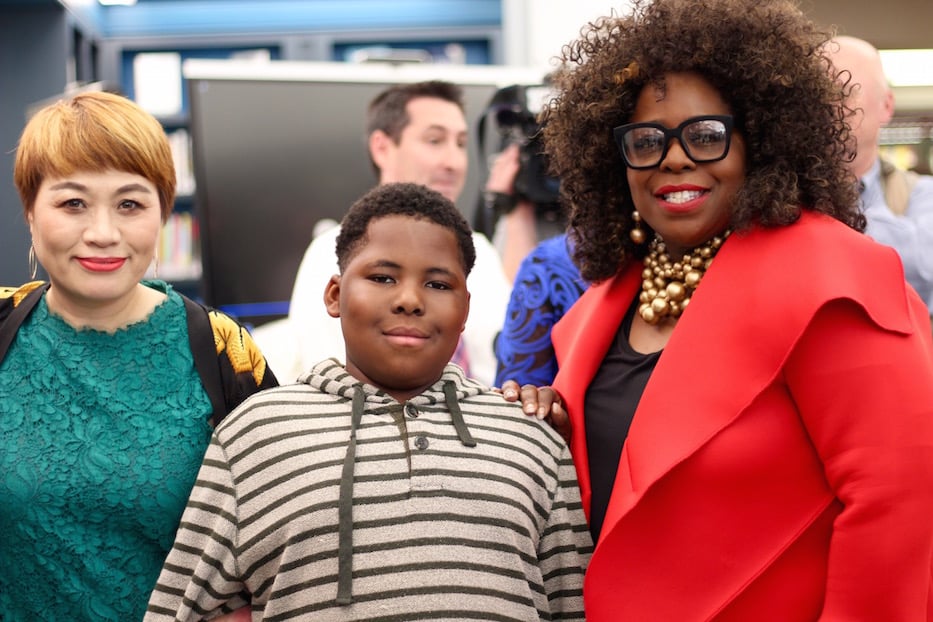 Staff members celebrated with big hugs, some cracking huge smiles as they rolled out a banner announcing the award. So did collaborators, lauding the library and Brogan as they took the mic for a few minutes at a time.

After serenading the crowd with a little School House Rock, reporter and mom Veronica Douglas-Givan recalled learning about the summer slide in reading, and worrying for her son Jayvon. Then she spotted a flyer for “READy for the Grade” at a corner store close to Roberto Clemente school. She took it and dialed the number. Three years later, it’s on her calendar.

“When I tell you, we have become a part of an awesome family,” she said. “The one-on-one that he was able to get during the summer, and the families coming together of all hues, looking like our wonderful city … and the families would come and they would be eager, to find out how to help their child succeed in school and succeed in life. I was just like them, trying to figure it out.”

ECIC Director Michael Harris said that since Ives Squared opened last summer, over 6,000 people have registered in the space to both use equipment and meet with fellow entrepreneurs about fledgling business and startup ideas. He noted Collab, another ECIC venture that holds weekly office hours and meetings in the space.

“I like to hold meetings here because I feel that it reflects our values,” he said. “Starting our investment in innovation by lowering barriers to participate for New Haven residents. And empowering and inspiring people to pursue the ideas that they have that could become their own ventures and have an impact on the world.”

In the past month, the library has also reopened a call for a community-focused vendor in its cafe space, the lease for which Whole G will not be renewing this summer (Whole G owner Andrea Corazzini did not respond to multiple requests for comment).