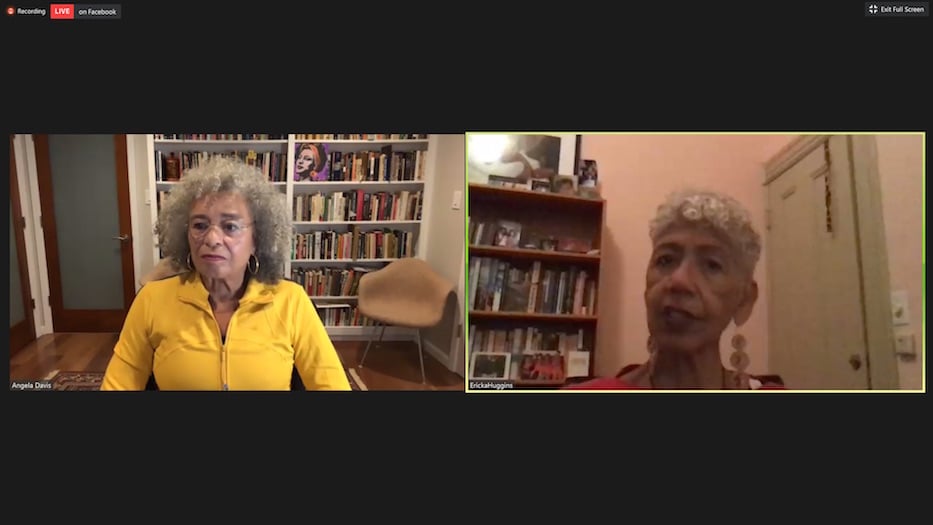 In the backseat of the car, a young Black boy sketched Ericka Huggins’ hand. The boy was a student at Oakland Community School (OCS) and struggled with reading. He got out of the car, and showed her the drawing: a near photographic rendering of her hand. In that moment, she realized she could give this child a reason to read. The pedagogy just needed to be student-focused.

On Wednesday night, lifelong activists Angela Davis and Ericka Huggins discussed education as a tool for change based on their experience with OCS and Black liberation work via Zoom. Both are former members of the Black Panther Party who have spent time in prison for their activism.

The discussion was hosted by Artspace New Haven as part of the exhibition Revolution on Trial, which runs through Oct. 17 at the organization’s Orange Street gallery.

The belief that education could be transformative was born out of Huggins’ involvement as a leader of the Black Panther Party in the late 1960s. In 1968, Huggins and her husband, John, became leaders in the Los Angeles chapter of the party. They had a sweet daughter, a baby they named Mai. In January 1969, both John and Alprentice “Bunchy” Carter were shot and killed.

At the beginning of the discussion, Davis recalled that January day. Before she belonged to the Black Panthers, she belonged to the Los Angeles chapter of the Student Non-Violent Coordinating Committee or SNCC. She got to know Huggins' late husband John after joining the party and coordinating education on the West side of the city.

"I will never forget the day," she said.

Back in 1969, Huggins traveled to New Haven to be closer to her husband's family. She opened and led a chapter of the party in New Haven. With Panther Bobby Seale, she was one of two party leaders falsely charged with the murder of Alex Rackley, a suspected FBI informant. She was incarcerated at Niantic State Prison for Women for two years awaiting her trial.

Early in her incarceration, she asked one of the attorneys for a yoga book because she wasn’t able to stretch fully in the cell. Her time in solitary confinement and eventual practice of meditation would go on to shape many of the guiding practices at the OCS.

Around the same, Davis was incarcerated in the New York Women’s House of Detention awaiting her own trial. She was wrestling with bouts of depressions and anxiety in solitary confinement. Bert Small, the party's primary doctor, tried prescribing a series of medications and even tranquilizers but nothing helped. One day, he finally suggested she try yoga and gave her a book.

“That was the beginning of my yoga practice,” she said. “I probably have you [Huggins] to thank for that.”

As Huggins continued her yoga practices, she reveled in sitting and breathing. She began to think better of herself despite feeling that incineration was a marker of her worth.

Over the course of days, she sat with herself looking inward for something that no one else could provide. She found freedom.

“There is a place in me that is absolutely free,” she said. “That was the first time in my life I had ever felt like that.”

Finding an inner freedom allowed her to see her daughter for one hour on the weekends without crying. She would cry on the way back to the cell, but for that one hour she was fully present.

“I can’t say that I loved the experience of being incarcerated, but I was able to be resilient, because I was taking care of the deepest part of myself, and coming to love her, just as she is,” she said.

Huggins was acquitted of all charges and released from prison in 1971. In 1973, the Panthers founded OCS in East Oakland. Huggins and Donna Howell were chosen as the inaugural directors. The school went under numerous incarnations, starting out as a homeschooling in North Oakland, then a school for children of the Black Panther Party, before moving into an old church on 61st street.

The school opened with 50 students, but even before Huggins and the other staff could spread the word, they had reached capacity at 150. It had opened as a model elementary school, not meant to detract students from the surrounding public and private schools. But, Huggins said, the outpouring from the community was a reminder of what community members craved in their education.

“Working with a team of incredibly talented party members and local educators, a vision for the innovative curriculum for the school was written,” Huggins said. “This curriculum and the principles that inspired it became a model for and predecessor to the charter school movement.”

The school was funded through grants and private donations, giving its staff full autonomy on curriculum development and instruction. The school shut down in 1982 but it was recognized as pioneer not only for its educational practice but also for providing breakfast to students long before federal initiatives like the the School Breakfast Program were as widespread as they are today.

The school’s pedagogy was rooted in the belief that “children should be taught how to think, not what to think,” Huggins said.“I think that’s a principle that should govern all learning ... You didn’t want to control what kids were thinking.”

Huggins and the staff turned to Brazilian educator and philosopher Paolu Freire to develop new styles of teaching that did not limit students. Freire famously coined the “banking” or passive approach in learning in which information is deposited into a students’ minds. He proposed that a “problem-posing” approach led students to become active participants and link knowledge to action.

In addition to Freire, Huggins studied the Black church school movement from her mother’s time. Huggins’s mother grew up in Washington, D.C. and attended a school with only two classrooms for all students K-12.

“I realized that these mothers, aunts, and grandmothers just took it upon themselves,” she said. “Okay, the government won’t educate our children, so we’ll do it,”

The school embraced a curriculum unlike any other in the nation. If a student asked how the moon stayed in the sky, teachers created a curriculum to teach about gravity and the planets.

Huggins’ recalled the boy who had sketched her hand many years ago, in the midst of his struggles with reading.

Huggins understood that his road to literacy just looked different. They made cartoon strips. He illustrated, and they wrote the captions together. The boy eventually learned to read and became a distinguished artist in the area.

“We didn’t have any judgment about why they couldn’t read,” she said. “Some of us had been those very children. We were looking at things structurally.”

OCS teachers asked “why can’t we do this differently?” she added.

She remembered asking those same questions alongside other OCS teachers and being dismissed or laughed at at a younger age. Huggins, whose maiden name is Jenkins, recalled being scolded for her physical appearance and inquisitive nature.

“I was told, ‘Jenkins, don’t sit like that. Don’t wear your hair like that. Don’t ask another question,’” Huggins said. “That was so hurtful to me as a young girl. I wanted to know everything!”

Based on their own adverse experiences, teachers decided to love the children as they were and facilitate learning around the students’ interests. When Huggins first began, she believed that she didn’t have the necessary formal education to teach. She had dropped out of college to join the Panther party.

“I didn't have the credentials right,” she said. “But what we did have is the lived experience of being Black and Brown children. There we started and then we educated ourselves.”

Huggins also wanted to provide the students an opportunity to rest their minds and implemented a five-minute meditation after lunch. At the time, they referred to it as “sitting quietly and breathing.”

“We all have this innate place of peace inside us. And freedom,” Huggins said

“They talked about their clarity in reading and studying and so on,” she said. “The ones who were sad about the things going on in their lives … could say, ‘I feel better.”

She herself found the school to be a place of healing; at one point during the talk she referred to it as an oasis. At the time, Mai was enrolled at the school, and she was able to spend more time with her.

Years later, she worked with an organization that did mindfulness interventions in public schools, and found that just a few minutes of meditation a day helped students excel on standardized tests.

Huggins does not believe that standardized tests are accurate measures of intelligence. In fact, OCS did not test children—and she doesn’t think schools should.

“A true education teaches us our true place in this American society — our history as well,” she said.

During the question-and-answer portion of the talk, someone asked how teachers can circumnavigate a school system that promotes a testing culture rather than a learning culture.

Huggins noted that OCS ran an experiment to show the fallacy of testing. She gave the students a test that was given to students across the school district. The students at OCS were not regularly tested, so the staff had to explain what a test was.

Before taking the test, students were instructed to sit quietly and think critically about the test. The children excelled at the tests.

She believed that the children were able to excel because they were not pressured to do well by the teachers or system. In return, the lack of pressure prevented them from not developing internal personal pressure or anxiety.

These pressures and anxieties extend to Black and Brown teachers who often find themselves despairing about the state of education for Black and Brown communities, both she and Davis noted. Often they were are up and enraged by the situation. She recommends that teachers try breathing and find a grounded place.

When asked about the integration of schools, Davis answered that integration itself is not sufficient, and will not solve the systemic problem that existed prior to integration. She discussed schools within the larger concept of the school-to-prison pipeline and replicating state violence.

“We say schools not jails but then we realize that we can’t refer to education as it exists today,” she said. “We have a serious problem in this country talking about systemic and structural racism. It expresses itself through state violence brought about by the police and prions.”

“We can't keep schools out of that conversation because schools incorporate structural and systemic racism as much as or more than any other set of institutions in our society,” she added.

She ended with a call to transform education and look back at the work being done in the past, consider what has been available and succeeded.

“I think this is a moment because of the fact that we're looking at so many institutions and the impact of structural, systemic racism,” David said. “This is a moment that everybody should seize upon. Because if the changes are going to happen, we have to begin the work of institutionalizing those changes right now.”

Revolution On Trial runs at Artspace New Haven through Oct. 17.