Furry Friends Get A Taste Of Edgewood Park 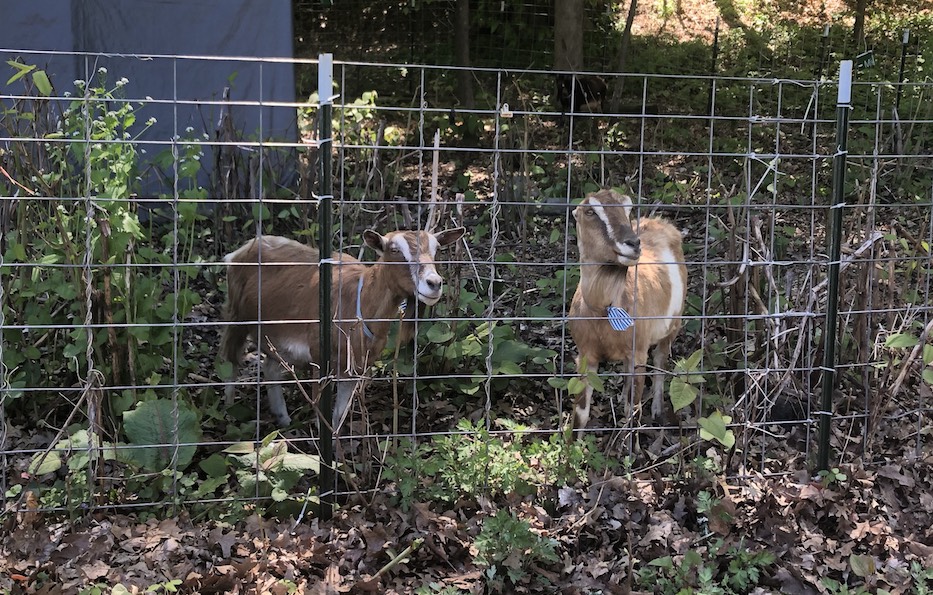 Six wet-nosed, long-eared summer renters have made their way to Edgewood Park just in time for warm weather. Now that they’re in place, they’re earning their keep by eating as much poison ivy and Japanese knotweed as they can—and keeping the neighborhood a little bit cleaner in the process.

For the second year in a row, the goats are part of a practice called “goatscaping,” designed to fight invasive species that take over the park all year, and especially in the warmer months. The project is a collaboration between New Haven’s Friends of Edgewood Park (FOEP) and Green Goats, a company based in Rhinebeck, New York (read more about their work here and here). This year, the park has welcomed back veteran chomper Cinnamon, as well as New Haven newcomers Raptor, Heidi Klum, Emmy, and Jujube.

“I’m so excited that they’re back,” said Green Goats Co-Founder Ann Cihanek, who runs the company with her husband Larry, in a phone call Thursday morning. “It’s just a nice warm welcome. The first year feels like having a baby—we’re here for every call, every worry about water, every time people second-guess themselves. The second year, people are all in.” 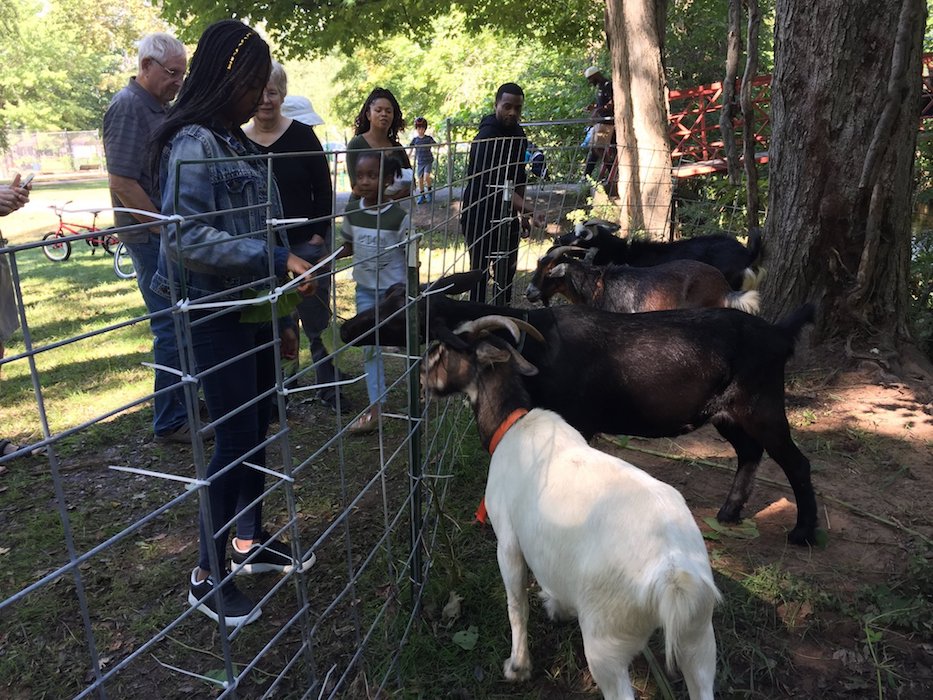 The goats arrived earlier this month, in time for Westville’s 22nd annual ArtWalk, and are set to be there through the fall. As sun-soaked ArtWalk visitors admired them through a fence—petting is off-limits—a cadre of volunteers brought them fresh water and checked in on them to make sure the group was settling in. They were greeted with happy bleats and already-busy teeth and hard-at-work jaws.

Like last year, volunteers from Chapel Haven and The Hopkins School will be pitching in, checking on the goats and making sure they are safe in their fencing and have drinkable water, to wash down the tons of leafy greens they are eating each day. Some residents of Art Lofts Westville can also see them from their windows, which came in handy when last year when one goat got out. Within hours, artist Violet Harlow had gotten it back into its protective fencing for safekeeping.

During last year’s inaugural run, FOEP started with five goats, reduced that number to three, and then brought it back up to six. Mike Uhl, the project’s initial architect, said that he anticipates all five will remain in the park this year, where a warm spring and heavy rainfall has created serious overgrowth.

"I’m excited," Uhl said in a phone call Wednesday, waiting for a flight back from the West Coast. "It’s been a fun project and we like having members of the community involved. I’ve loved the excitement that we’ve had in the off season. We’ve repeatedly heard that it’s an interesting take on addressing an issue." 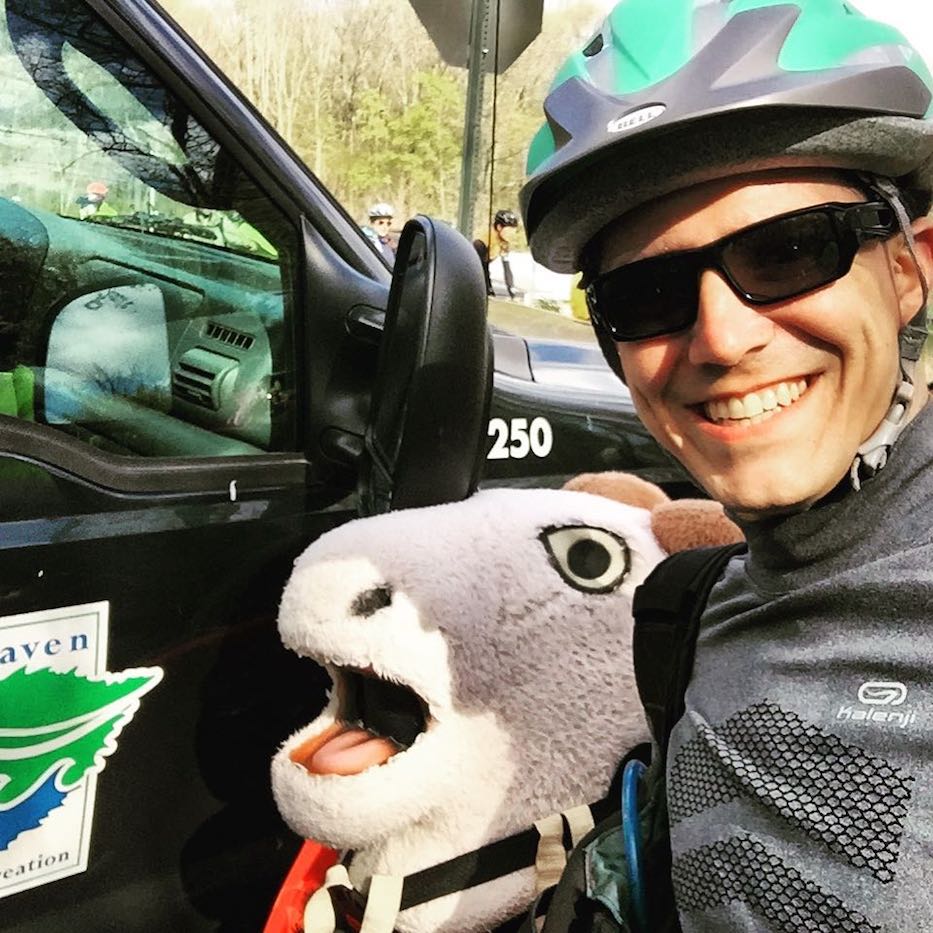 As the project enters its second year, he added that he has received at least five inquiries from groups that oversee other local parks, as well as the Department of Parks, Recreation and Trees and the Regional Water Authority. He has also reached out to Southern Connecticut State University, to see if any of its students might be interested in documenting the project’s success with drone shots studying leaf coverage and reduction in overgrowth.

Now that they have arrived, the goats will be in the park through the end of season (last year, they remained in the park through mid-October). Several FOEP goat-themed events are planned around the stay, including the sale of new t-shirts with goats grazing on the front. And around the neighborhood, Westvillians are excited to have them back.

“I love the goats!" said Westville Village Renaissance Alliance (WVRA) Executive Director Lizzy Donius in a phone call Thursday morning, laughing as she recalled a goat-wrangling session when one of them got through the fencing last year. “Between the goats and the new skate park, I feel like this whole end of Edgewood Park is nice and activated, and that keeps it safe.”

When asked for comment, Heidi Klum (named ironically for very her short legs, said Ann Cihanek) took a big gulp of water and nibbled on some knotweed thoughtfully. She noted that she feels fortunate to have worked out a food-based rooming arrangement in Westville, given skyrocketing rents and fee-obsessed developers elsewhere in the city.

“It’s a nice way to spend the season,” she said.

Lucy Gellman contributed reporting. This piece comes to the Arts Paper through the second annual Youth Arts Journalism Initiative (YAJI), a program of the Arts Council of Greater New Haven and the New Haven Free Public Library. Over eight weeks this spring, ten New Haven Public Schools (NHPS) students work with Arts Paper Editor Lucy Gellman and YAJI Program Assistant Melanie Espinal to produce four articles, for each of which they are compensated. Read more about the programhere or by checking out the"YAJI" tag.