Hamden Does The "Chicano Two-Step" 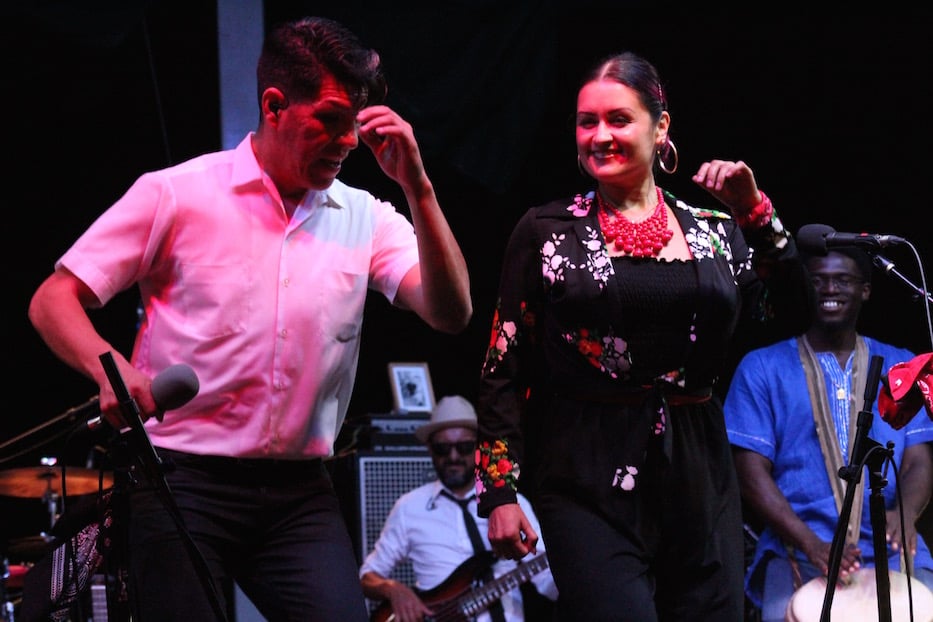 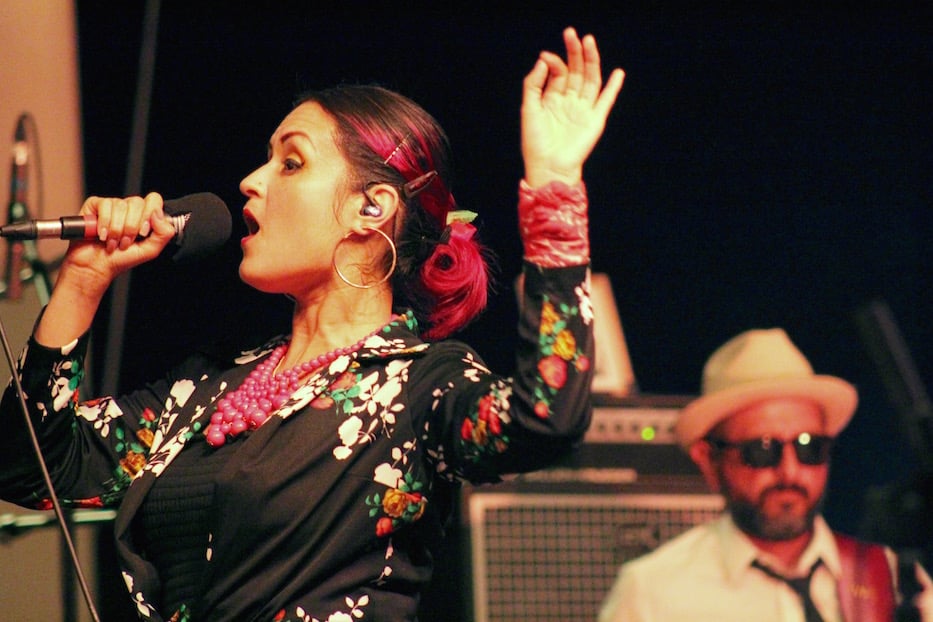 When Las Cafeteras’ Daniel French proposed student debt forgiveness, a few members of the crowd rose to their feet and started cheering. By the time he moved to water rights, some were airborne. And when his bandmate Hector Flores dedicated a song to Nelson Pinos, the immigrant dad currently living in sanctuary in New Haven, at least ten cries of “Free Nelson!” rose up from the front row like birdsong.

Friday, Las Cafeteras and the Mandingo Ambassadors kicked off the 31st annual Hamden Free Summer Concert Series, organized by the Hamden Arts Commission and held in Hamden Town Center Park during the month of July. Over 1,000 attended, many rolling in with lawn chairs, picnic blankets, family members and friends. For several in the audience, it marked a first trip to the series, their interests piqued by a double bill centering global voices and performers of color.

“Hamden is a super diverse town,” said Hamden Arts and Culture Director Julie Smith, who built the lineup with input from the town’s 14 arts commissioners. “We wanted a summer series that reflected that.”

That decision wasn’t without pushback, she added. Even before the concert, several Hamdenites contacted the office when they didn’t recognize the names of bands, or wondered why there wasn’t more classic rock on the lineup. Others took umbrage with Las Cafeteras’ message, which includes land sovereignty, water reclamation and safety, and not locking children in cages at the U.S.-Mexico border. The office doubled down on the set.

“We know that classic rock is popular in Hamden, but we know that we have more people than those who listen to classic rock,” said Alisha Martindale, arts and marketing manager for the town. 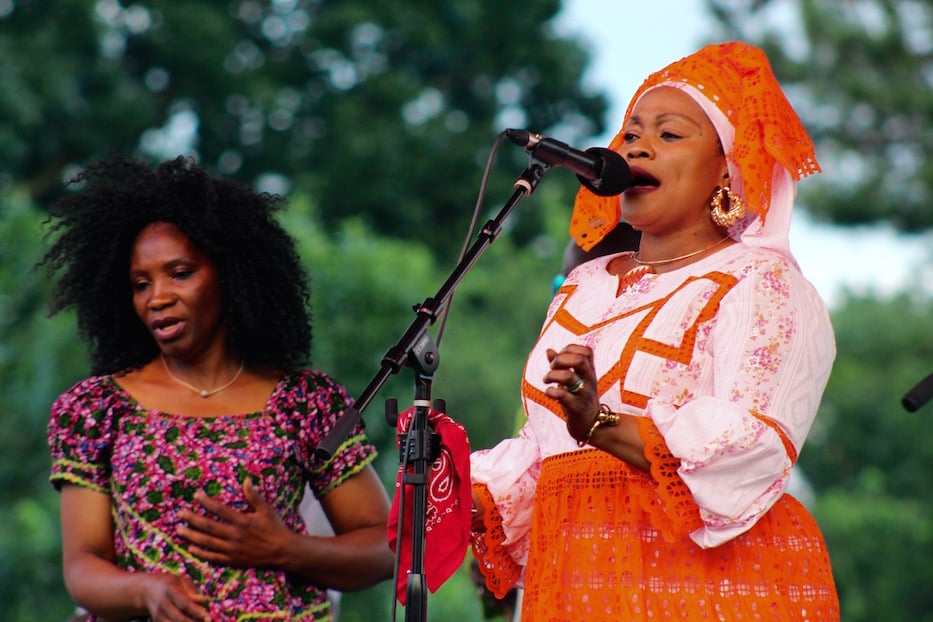 But once the night got underway, a certain excitement flickered through the air. It felt a little like a homecoming: Mamady Kouyaté, who founded the Mandingo Ambassadors in 2005, helped shape the landscape of 20th century Guinean jazz. Although he has called New Haven his home for two decades, the band rarely plays here—it’s usually easier to make a pilgrimage to Brooklyn to see them.

Introduced to the stage with hand flourishes and loud bursts of applause, members of the band launched into a rising mix of bass and dipping, danceable vocals, joined by M’Mah Doumbouya right as the horns hit. 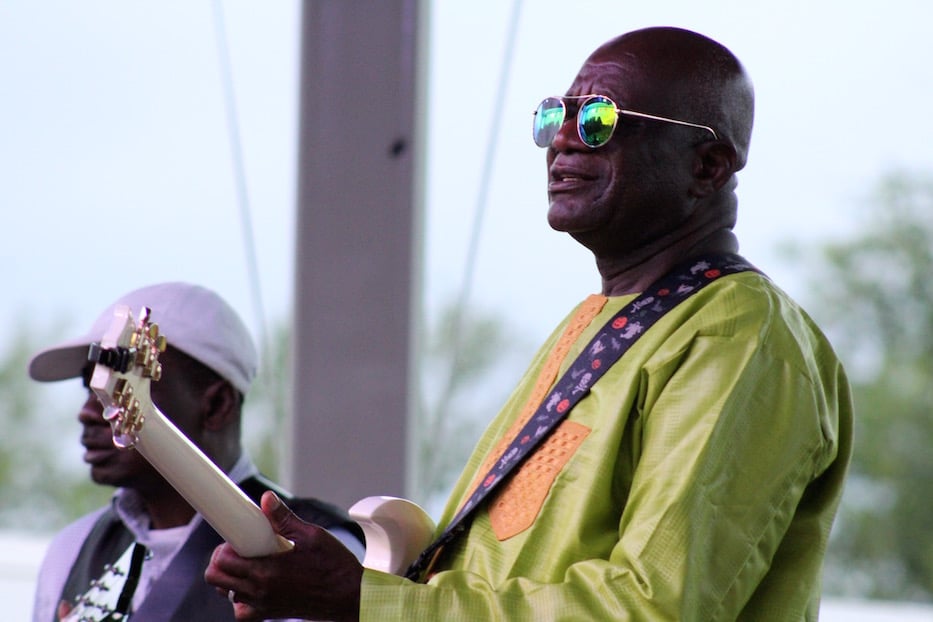 Onstage, Oran Etkin took it to church on clarinet, the instrument wailing even as an amp popped and fizzled out. As engineers ducked beneath the stage to figure out what was going on, the band kept pushing through the song, totally unfazed. A few attendees stood agog at Kouyaté, who took the stage with a broad grin, the audience reflected back in his sunglasses.

In the crowd, that kind of bouncy, meditative chill worked its way through a sea of picnic blankets and beach towels, getting the first few dancers of the night to their feet. Closest to the stage, a few pint-sized fans were shaking their small bodies on the grass, letting the rhythm work through them.

Further back, someone walked up to a stranger, and offered her his hand for an impromptu tango. Even vendors from food trucks, still fielding orders, peeked out of their trucks and came out from behind their carts to see what was going on. 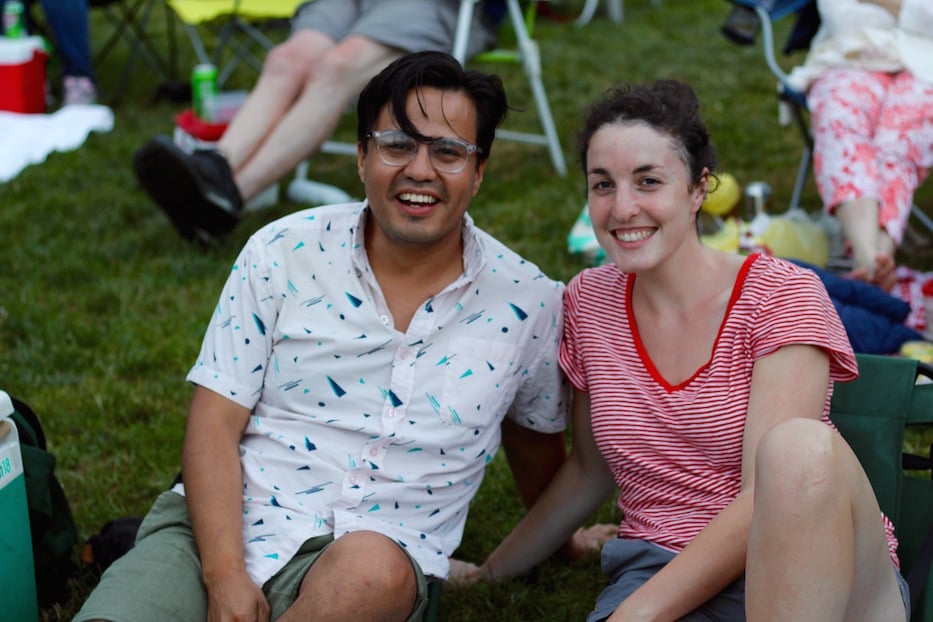 Spread out on a picnic blanket in the twilight, New Haveners Luis Luna and Ariana Shapiro (pictured above) were easing into the evening. While they arrived in time for the Mandingo Ambassadors, they had made the trip largely for Las Cafeteras, surprised but delighted to see them performing in Hamden. They’re exactly the kind of band Luna is likely to feature on his music program, a show on WPKN dedicated to artists of the Latin-American diaspora.

In particular, Luna recalled watching them perform last June, transfixed and moved by their words after years of his own social justice work in Connecticut. They performed twice in one night, in back-to-back appearances at International Festival of Arts & Ideas and intimate encore for Pinos inside First & Summerfield Church. So he jumped at the chance to hear them again.

“I think having spaces like this, with music that actually talks about the reality of what is happening on the ground … this gives us light to continue to push forward and continue to fight this system” he said. “They will never extinguish our light.”

“These are difficult times, and finding spaces of community and culture around music, especially music that speaks to the dark times that we’re living in, is one of the things that gives us hope,” added Shapiro. “This is a space where joy happens.”

Back onstage, that joy was exploding. Several songs in, Mandingo Ambassadors had attracted a crowd at the front, new friends becoming dance partners as others found their own rhythm, or tried to keep pace with the djembe. As musicians prepared for one final number, a few members of the band focused on three of the smallest dancers up front, trying to get them to the stage.

Members of the arts commission buzzed around, opening the white gate that separates the crowd and the amps just long enough for three little bodies to slip through. In a Superman Shirt that glowed under the stage light, Larson Guiavoqui broke into his best robot, his mom beaming from the front row. 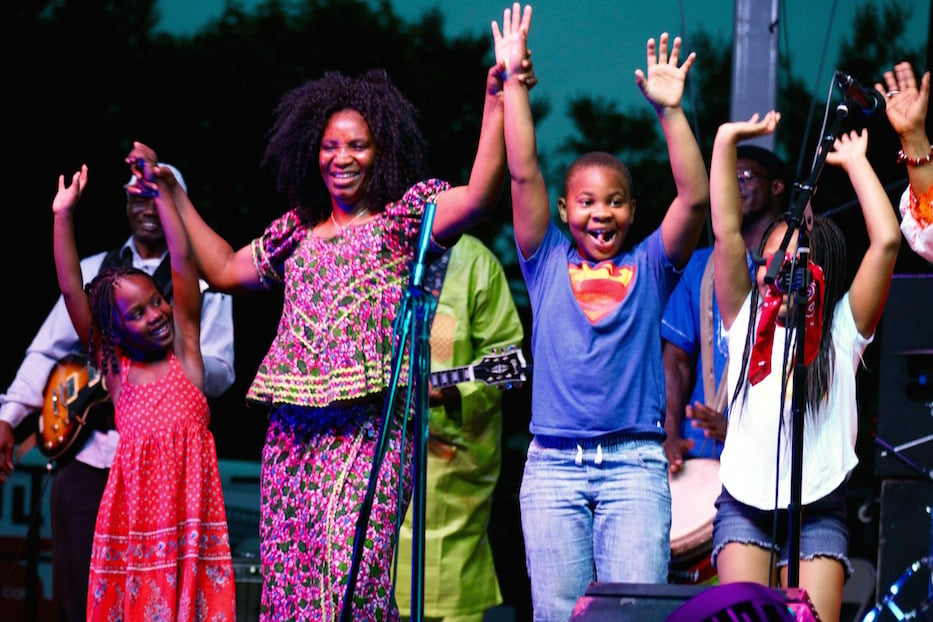 It kept going for East L.A.-based Las Cafeteras, who rushed onto the stage as the sun sank, and blue light flooded the stage on cue. No sooner had they lifted their instruments than members were at the center and lip of the stage, priming the audience for their mix of Son Jaracho, zapateado, ethereal vocals and hip-hop. They raised their hands above their heads as the first notes of “El Chuchumbé”—the name of the first folksong to be outlawed during the Spanish Inquisition—rang out over the park.

“We came all the way from L.A. to get down y’all,” yelled French, who cycled through keys, vocals, and jarana segunda over the course of the evening. French stepped out from the keyboard and started dancing, as if to lift the crowd up, member by member.

And the band did, with a set that bridged Afro-Mexican influences, Son Jarocho, hip-hop, zapateado and strains of rhythm tap and even American sign language. Hopping between earlier releases and tracks off their 2017 Tastes Like L.A. for over an hour, they wove in strong and often unflinching political commentary, simultaneously a party band and political rallying cry. 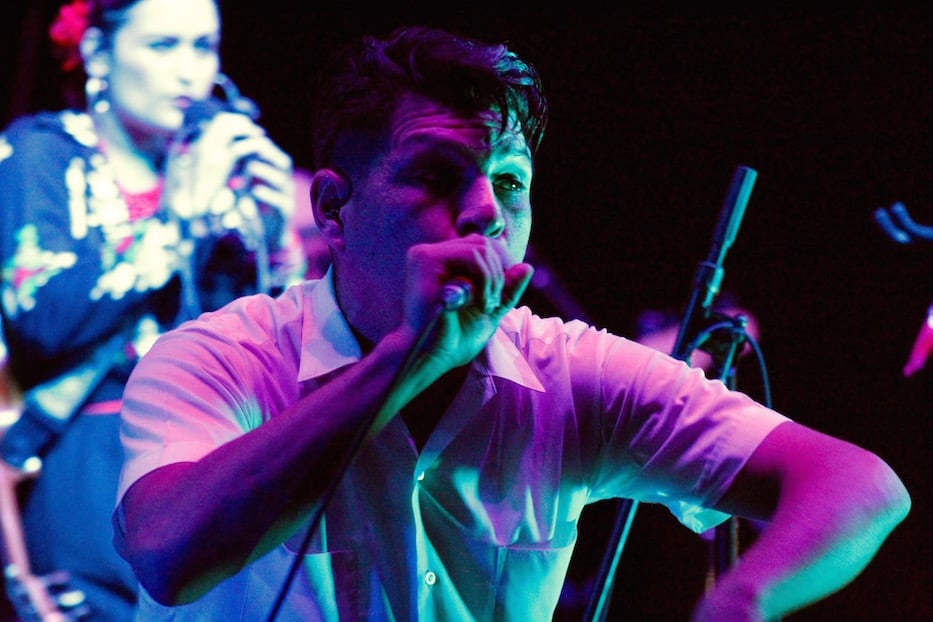 As the band played in the soft, understated beginning of “If I Was President,” members moved from foot to foot in what Hector Flores called the “Chicano two-step,” urging the audience to join in.

“If we can’t even dance together, how we gonna build a neighborhood together?” asked Flores, his hands fanning out gracefully before him. “Our state, our country, if we can’t even two-step together? So like they say, first things first.”

He urged the audience to join in on the chorus ("Me gusta la lima/me gusta limón/pero no me gusta/tanta corrupción"), joking that it translated to "I love Connecticut" ("try it at parties!") as French took a mic, and walked to the lip of the stage. 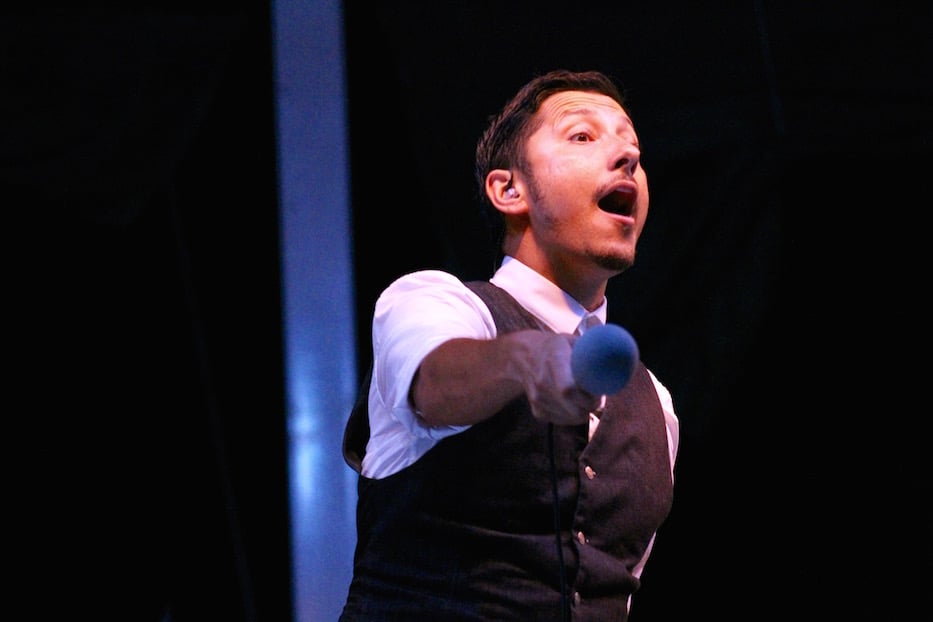 When he put the mic to the audience, members screamed in support. Many who hadn’t been standing already made their way to a clump of dancers, lifting their arms above their heads.

The song set the tone for much of their act. Musicians honored Black and Brown bodies slain by police. They dropped knowledge—and some haunting vocals from Denise Carlos—with “It’s Movement Time,” a song that gets a steel spine from Jose Guadalupe Cruz Cano on drums, and fierce lyrics fromHector  Flores. 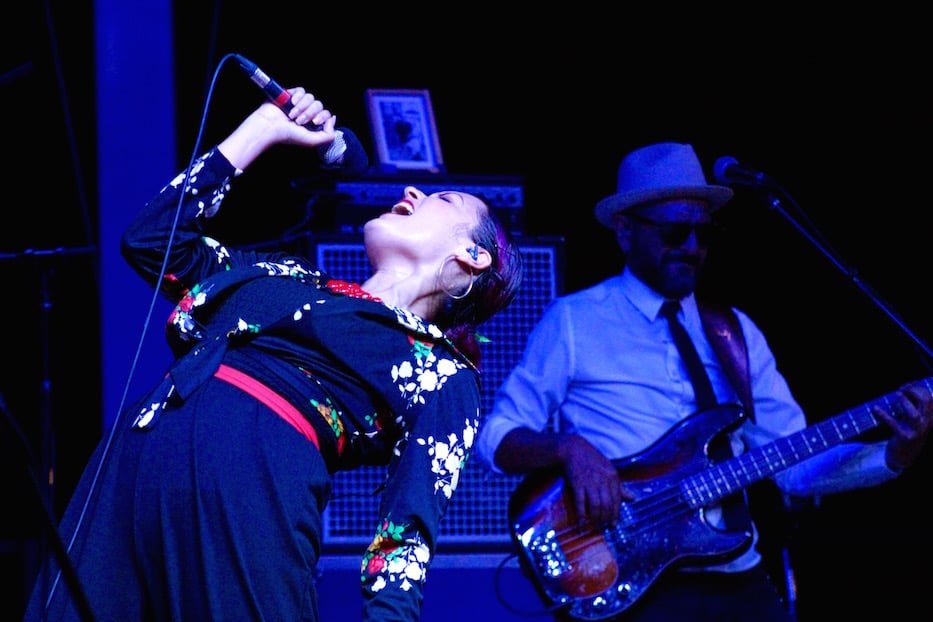 They honored farm workers, then turned to teachers and parents, then to universal healthcare and equitable compensation. They denounced borders and reconnected with the earth, playing and dancing ancestors into being. They paid homage to the moon, with a stunning rendition of “Luna Lovers” that had Flores and Carlos orbiting each other like planets.

For many in the crowd, it seemed like the band could have played right until their 4 a.m. flight back to California, and not gotten any less thrilling. When members left the stage, the crowd fell into an organized cheer of “Otra! Otra!” that had them running back on, after Smith promised that it wasn’t too late for a final song.

From the steps, they emerged with Camara. The first few strains of “La Bamba Rebelde,” the anthem from which the group gets its slogan, floated hundreds of attendees now pressed in close to the stage.

When the band dedicated the song to Pinos, members at the front of the crowd raised their arms with cries of “Free Nelson!” When Camara came in on drums, trusting the improvisation completely, a few attendees screamed even louder. At the front of the stage, Hector Flores waved a black bandana and danced to the djembe until he was completely airborne.

“My people, the most amazing thing is happening today,” said French. “We come from different continents, different places across the world, yet here we are in the dark. It’s not creepy. It’s cool!”

He turned to Camara. “What you got to say, bro?”

Camara went to town. Beneath his palms, the djembe was not a drum but an old text, passed down and then passed down again through hands on hands, voices on voices. It sang out, triumphant, the loudest heartbeat in a room of heartbeats.

French miced the whole thing as attendees cheered. “And then what happened?” he asked.

Camara kept the story going, plot picking up as he pushed forward. He grinned, somehow looking at the band and the audience and the drum at the same time. 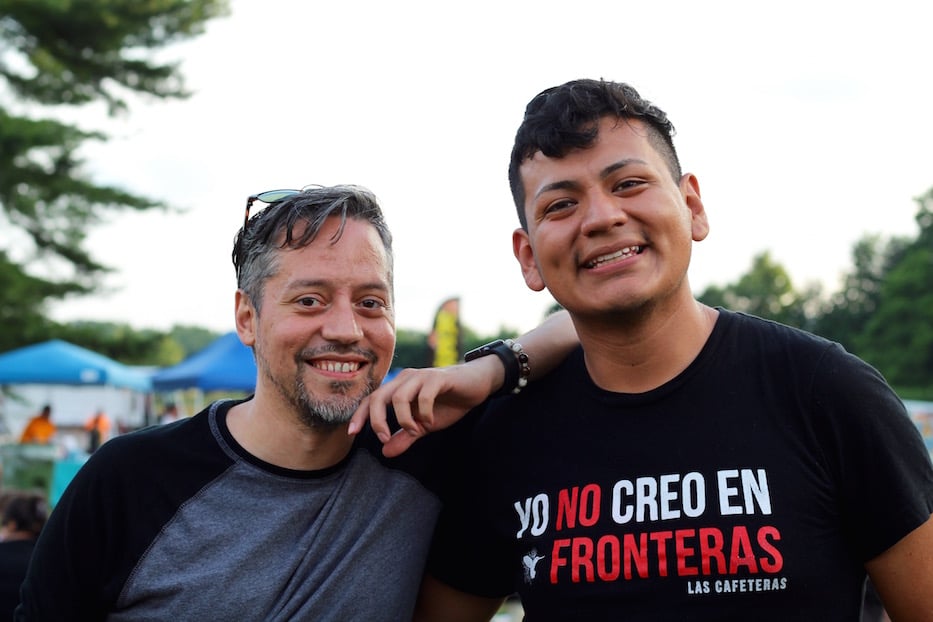 “Every single time, they just make an awesome job making something amazing, something that brings people together,” said Jesus Abraham Morales Sánchez, an attendee and immigrants rights activist who had arrived wearing the band’s signature “Yo No Creo En Fronteras” shirt and proceeded to dance for the next four hours. “Their message in their music is beautiful. It’s a call for equality, it’s a call for unity. That’s especially uplifting, especially in times like these. This is refreshing and rejuvenating.”

For a full schedule and more information on the series, which also includes performances from The Wailers and Julian Junior Marvin and indie favorite 10,000 Maniacs this month, visit the commission’s website. For more photos and videos from the performance, visit The Arts Council of Greater New Haven on Facebook.