Hanan Hameen turned on her camera from Kaolack, Senegal. In New Haven, her students from Neighborhood Music School beamed in one by one. They took in the impromptu classroom, which sat nearly 4,000 miles—and a single Zoom link—away. Hameen stood, and began stretches for the three-hour session.

The New Haven teacher is building a new model for cultural exchange and dance education from Kaolack, where she is facilitating workshops and learning from dancers for the next three months. It is her second time this year in the city, which at the heart of the Kaolack region in Senegal. Hameen is leading the work through Artsucation Academy Network, of which she is also the founder and director.

“This is a more personal, cultural, global exchange, really connecting with who we are as Africans in America, and who I am as an African in America,” she said in a recent interview, digging into shredded chicken and fried plantains from Somos Arepas. “Not only what that means here, but what does that mean in the world? What does that mean in other places? Who is that person? Who are all of the ancestors, all of the cultures that make up that person?”

She noted that the timing is intentional: winter is coming, and she doesn’t want to be here for it. COVID-19 cases are also rising in the U.S., including in New Haven. Senegal, which has recorded 15,000 cases and just over 300 deaths this year, feels like a safer place to be. She added that she can feel the unique stress and trauma of America—a country built by stolen West Africans laboring on stolen land—leaving her body when she’s abroad.

“Over there, you can be an individual,” she said. “Over there, I'm just Hanan. I'm African like everybody else. I just speak a different language and I sound a little different, but if I keep my mouth shut nobody even knows. And dance is a universal language.” 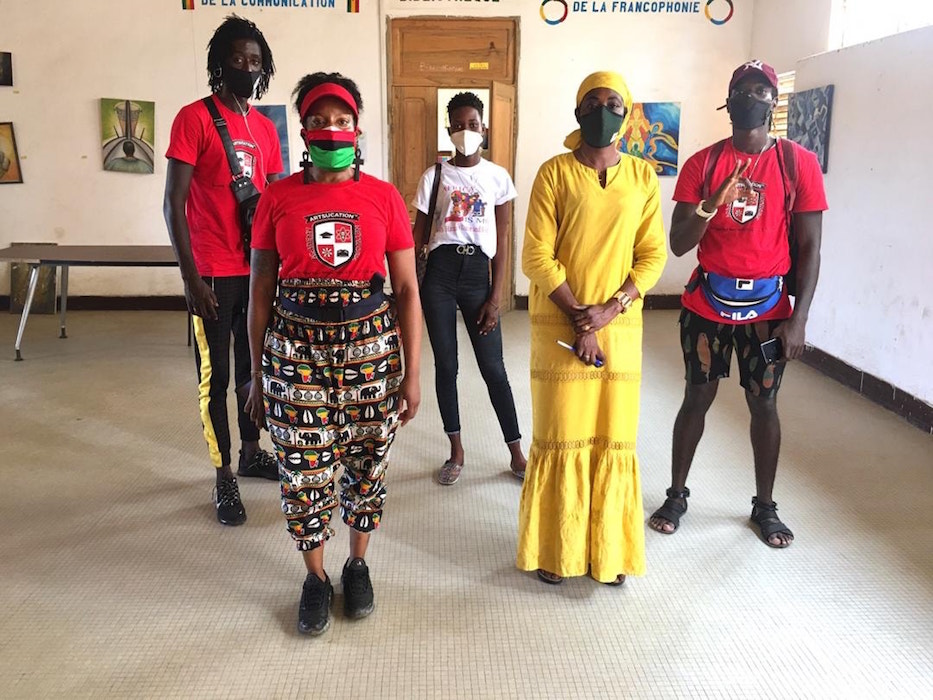 Hameen (at the front) during a workhop. Photo courtesy of Hanan Hameen.

The connection to Senegal goes back to 2016, when Hameen met dancer Baidy Ba through DanceAfrica Founder and Hameen’s “dance grandfather” Chuck Davis. Ba is the director of the M’Bosse Dance Company in Kaolack, where he also leads its Back To The Roots Dance Festival. After the two shared a stage four years ago, they kept in touch. Before Davis passed away in 2017, Hameen promised him that she would “keep the legacy going.” Davis had told her that Ba was her dance brother, an affectionate term that she uses to describe him today.

She intended to go well before this year, she added. For Hameen, travel to Africa is a normal part of her life: her grandmother repatriated to Ghana over two decades ago, and Hameen grew up seeing her parents visit West Africa. Through her work as Artsucation Academy Network founder and director, she leads workshops focused on West African drumming and dance at the Stetson Branch of the New Haven Free Public Library and around New Haven and New York. In March, she typically travels to Guinea for cultural exchange.

This March, however, Hameen watched as COVID-19 hit and the world closed around her. For the first six months of the year, she taught classes from a temporary apartment in the Bronx, bridging New York, Connecticut, and West Africa with Zoom. She continued dancing with her students from Neighborhood Music School each week, working through a network of one-inch squares and spotty internet connections. She also started hosting Ba’s Saturday classes for a New Haven audience, sharing her Zoom account with him.

After realizing that her Juneteenth celebrations would have to be virtual, she worked with colleagues in Guinea, Senegal, Mali and South Africa as well as New York and New Haven to bring an international celebration to the city's International Festival of Arts & Ideas. Ba, who led a one-hour workshop on the Sabar technique that weekend, kept asking her when she was coming to Senegal. Not just over Zoom, but for real.

For months, she assumed it wasn’t possible due to COVID-19. Then she had another thought.

“I finished teaching, the Festival [of Arts & Ideas] was over, my classes were over … everything was still shut down,” she recalled. “We didn’t know when or if school was going to start, and if it did, it would most likely be online. I thought: ‘If Baidy can teach online from Senegal, I can too.’ You can be anywhere in the world right now, doing what you need to do. This opportunity might not open up again.”

She traveled to Kaolack for the first time in August, arriving in time to present a segment of her “Africa Is Me” class with live dance and drumming. She said she was careful to build a program that would look like “a real cultural exchange,” instead of a one-sided exercise in voluntourism. In a normal week, Hameen facilitates dance workshops with M’Bosse, and also spends time learning from the dancers there. She is also working with The Centre Culturel Régional de Kaolack and the town’s Alliance Française. Ba often calls her “the plug,” because she has a way of connecting people.

Her days are long by design, she added. After waking up and stretching early in the morning, Hameen gets on a motorcycle to get to the Centre Culturel or Alliance, often dancing for two hours straight. She takes a break for lunch, and then spends the afternoon rehearsing for three hours with members of M’Bosse. In the spirit of exchange, she does skill-sharing, teaching the Dunham Technique, the evolution of hip-hop, and the histories of hip-hop, ballet and tap in the United States.

Multiple days per week, she also teaches her NMS students from 6 to 9 p.m. Eastern Time, which is 10 p.m. to 1 a.m. in Senegal. While she called the language of dance universal—"the drumming is the heartbeat, and it connects us all”—Ba and members of the M’Bosse ensemble are also teaching her Wolof, so she does not have to use the colonial languages of English or French.

During her time in Kaolack, she said she has been moved by a commitment to mutual aid and community building that she doesn’t herself experience in New Haven. Her neighbors stop by to see if she’s doing okay. She recalled travelling in a car that got stuck in the mud during a rainstorm, and watching as residents came out of their homes to pull the car out of the water. When she returned to the U.S. in September—she came back to participate in Melanie Crean’s If Justice Is A Woman—she sent out a call for donations of clothes and instruments. She said it's a small way she can give back.

Then she got back on a plane and headed out. She called the exchange medicine for both the body and the soul: she finds that her lupus symptoms are less severe when she is in Senegal. Occurrences of COVID-19 are also low in Kaolack, although she wears a mask when she is rehearsing and in meetings. Next year, she hopes that she will be able to bring members of M’Bosse over to do the same sort of long term exchange in New Haven.

“Mother Africa is a healer,” she said. “The drums are a healer. I'm at home. And I've never felt at home before. This is the first time. My spirit feels at peace. Everything is just in alignment for me to be able to go and do this work. It’s surreal, and it’s a dream, and it’s an honor. It’s life-changing, and I’m for it.”