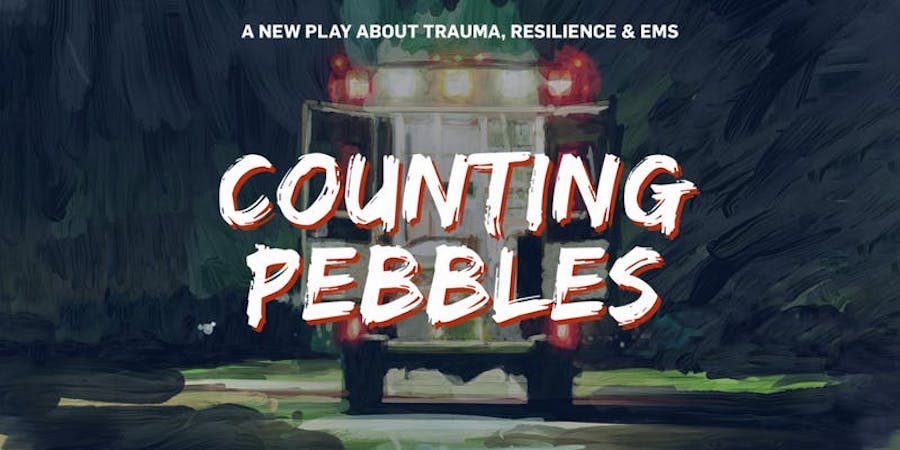 A man stands beside a chair, almost fully in profile, dressing himself. He is methodical: navy blue pants over matching blue long underwear, collared blue shirt, black belt. Penlight and bandage shears go straight into the pocket. Rubber-soled boots and a reflective yellow jacket hang nearby. Even before he faces the audience, it is clear he is weighed down by something heavy. We just don't know exactly what.

It's a scene from Counting Pebbles, an evolving work from theater maker, public health student and EMT Taiga Christie running at the Yale Cabaret through Sunday. Part of her thesis at the Yale School of Public Health, the play takes on the mental health and the often unspoken trauma of Emergency Medical Service (EMS) providers both in and out of the field.

Performances, which are free with a suggested donation, run March 15 and 16 at 7:30 p.m. and March 17 at 1 p.m. at the Yale Cabaret. Tickets and more information are available here.

The first rumblings of the project began in 2012, while Christie was working as an EMT in rural Vermont. On the job, she heard and saw the toll that the work took on fellow emergency technicians, who were often called into the field to respond to “neighbors, relatives and friends” who did not always survive.

“As I continued to with in EMS, community health and substance recovery, I witnessed the burnout, exhaustion, and vicarious trauma of care providers,” she writes in the program notes for the show.

Those experiences stuck with Christie. Two years later, she helped found Faultline Ensemble in Portland, Ore., where she was working in inter-facility transfers for an ambulance company. Designed to create socially-oriented work by and for members of the community, the ensemble itself was an outgrowth of the Portland-based, all-volunteer Rosehip Medic Collective. In 2016, Faultline began a collaboration with the Code Green Campaign, dedicated to providing mental healthcare and resources to first responders who experience trauma on the job.

Under the partnership, Christie conducted interviews with EMS providers and read over hundreds of Code Green’s stories (read some of them online here), workshopping the play alongside service providers, creative team members, artists and activists. She is quick to mention that the work is a deeply collaborative effort: members of the creative team have come from backgrounds in nursing, disaster relief and recovery, community health and education work, wilderness medicine, and military service among others.

“In my limited experience, these are not stories that are told very much in the culture of EMS,” she said in a phone call Friday morning. “It can be very hard to talk about the work. And I think that’s where storytelling and theater really excel. In creating space to talk about these things in daily life.”

The current cast comprises Faultline members, longtime friends and collaborators, and local actors that Christie has met in the last year. From almost the moment they step onstage, there is a frank testimonial quality to the work, as if EMS workers have walked into a room, flicked on the light, and finally, maybe for the first time, begun to tell their side of the story.

That’s where the play begins: in a small town that could be anywhere in the U.S., with a live soundtrack set to Americana and an EMS provider unit that is never not stretched thin. Through a series of flashbacks, audience members watch four EMTs—Emergency Medical Technicians—respond to and then grieve the loss of a close colleague and friend, who hid his own trauma until it killed him.

As they take the stage to remember him, a full portrait emerges: a father, husband, and dedicated public servant, who spent days off seeing where else he could mend someone’s pain. A hero, who barely made enough money to get by. And also a mortal, felled by a very mortal addiction. This is not a work about one's vices so much as the brokenness of a system that enables them, and the play soars from that distinction.

Characters are instantly relatable: the partner (Kelley Knight) who is living with the guilt of not having known her colleague was suffering, the abrasive veteran who isn’t really so abrasive at all (Chad Kinsman), the kind-of newbie who is still bright-eyed and hopeful a year into the job (William Berrey), the sergeant (Keith Nelson) who thought he was making the right call by not letting the partner into the house. Our fallen worker (a moving Rick Curtis) orbits his ex-wife (Allie Cislo) and living colleagues like a planet knocked just slightly out of sync.

Nothing is partisan in this world because there’s not time for that in the field. These people are just doing their jobs, and they do them well.

It hits home. These workers are our friends, or maybe they are our parents’ friends, or maybe we’ve spotted them in the hallways of our building, quietly saving lives in a million different ways. In a theater that is less than a mile from the New Haven Green, it is almost impossible not to think of the role EMS played last summer, when police, fire, and revolving door of EMTs responded to over 100 K2 overdoses on the New Haven Green, and lost zero lives in an around-the-clock effort.

And for EMS providers in the audience—Christie has done outreach to invite the provider community—they may also be current or past colleagues. It’s a humbling and needed reminder (on a campus defined by the class ceiling, no less) that there are tireless servants among us, making far less than what they need to survive, so that another person can make it to the next day.

Christie, with a dynamic creative team, has done the work—in part by absenting herself from the show—and the cast has absorbed it. The language is blessedly clear, without a hint of self-indulgent or flowery prose that would distract from a sort of greater, muscled truth. There's grim, sometimes bracing humor that makes us squirm, because it's about where we all end up one day. For bouncing largely between a bar and a funeral, the staging has some immensely striking moments, including a freeze frame sequence that makes one hold their breath until bodies unfreeze, and start moving again. Music underscores the whole play, a glue between scenes as musicians Dan Baker and Benjamin Yarrow play unflaggingly.

Maybe this is a work in progress—Christie has called it a draft in the program notes—but none of the rough edges matter. Without ever using the words, cast members make compelling arguments for pay equity, medicare for all, and trauma support for trauma providers while telling the stories of their lives. They teach the audience about current best practices, the limits of compartmentalization, and debates on where the field is going. They do their job. They put on their boots and go to work. They answer the call, every time. And by the end, they’ve learned how not to do it alone.