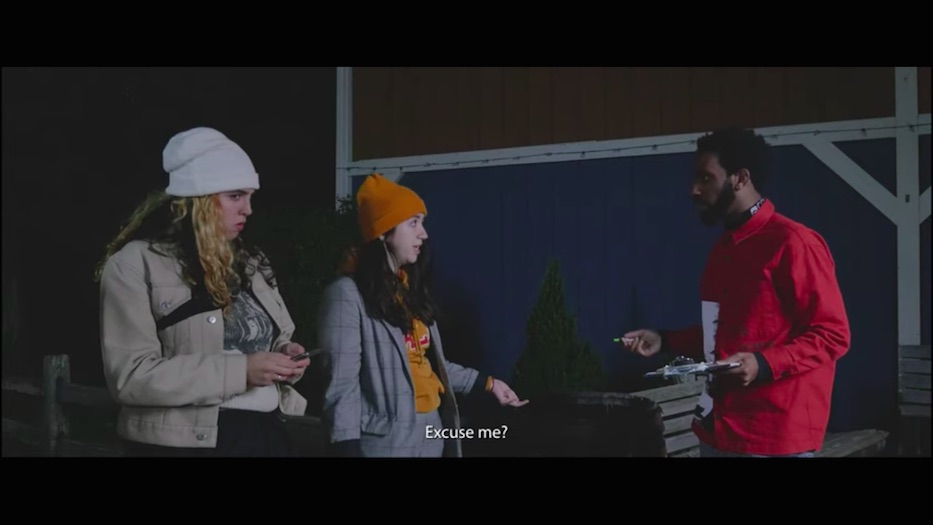 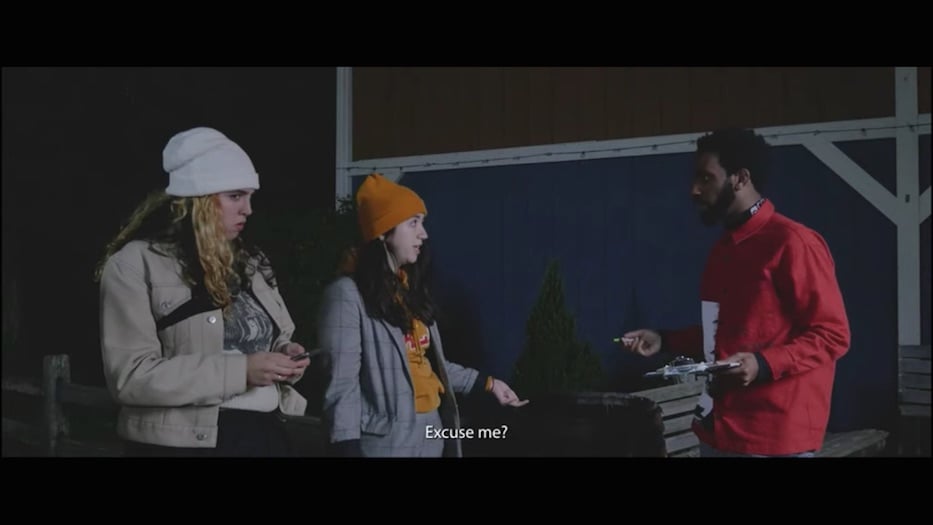 A still from the film, a 4 Freedom Films Production.

Stacy is so deep into discussing an Instagram message that she almost doesn’t see the person outside the movie theater, collecting signatures on a petition. Behind him, the building beckons, light pouring out of its windows. He steps forward, asking for just a second of her time. Her phone sends a beam of light up into their faces. She blows him off.

“Are you not aware that the world is on fire?” he asks, and a viewer can almost feel her eye roll beneath an orange beanie. “Look around you. The smoke is everywhere.”

It’s that smoke—literal and figurative—that artist Kolton Harris asks a viewer to witness and wrestle with in Nightmare, a new short film and music video meant to take on armchair activism two years after millions of Americans marched for racial justice. Produced by 4 Freedom Films, it asks viewers to hold a mirror up to themselves and ask whether they are doing enough for the health and wellbeing of their communities and their own interpersonal relationships.

“We went from this time of great animation to this lull, and I think there’s a lot of apathy, a lot of digital activism,” Harris said in an interview with the Arts Paper earlier this week. “I think a lot of folks have felt empowered by the language and terminology, but now they're not doing anything.”

That’s where the film starts, in the backseat of an Uber where Stacy (Wylie McCann) and her friend Carly (Mia Barbuto) are headed to a horror flick, both flipping through Instagram as the car cuts through the velvety black of a Friday night. Through their conversation, viewers learn that Stacy—who is white, and very good at liking things on Instagram—is the president of her school’s diversity club. Her sole qualification seems to be taking up the most air in the room.

On the cusp of the weekend, she’s peeved that she’s gotten a message asking whether she should really be in that position of power. Instead of engaging with the Black woman who sent it, she decides not to read it.

The thing is, Stacy seems like she’s peeved a lot. She’s peeved that a person of color (Harris) would ask her to take time to sign a petition on her way into the theater. She’s peeved when the Black attendant at the movie theater (also Harris) goes through his standard spiel—even though it’s probably one he’s paid to do. And she’s peeved when she enters an otherwise empty theater and an easygoing patron (a third Harris) is sitting in her seat.

By then, her fondness for microaggressions is out in the open. “Do I need to talk to the manager?” she asks the patron.

A viewer can see where the film is going—and stays to watch her reaction. That’s part of the horror, right? In some of the video’s most delicious moments, Harris, photographer Gary Falanga and videographer Erik Durr have layered the glowing, wet whites of Stacy’s eyes with zombie references, upside down and mirror images, and 24/7 news cycle that fills the screen in unending Brady Bunch like boxes.

Harris delivers, in a mix of real-life references and tight, supplication-like lyrics and harmonies that beg a listener to wake up. At his most raw, his voice teeters on a scream-cry. An original score from Harris’ longtime collaborator Jaden Williams pulses beneath him as he bursts into both song and movement (a nod to dancers Shya Fine and Tatiana Pemberton, who make the choreography feel full and urgent). Along the way, he folds in references to Michael Jackson, Marvin Gaye, Alfred Hitchcock, Jordan Peele, a news cycle that spectacularizes Black trauma, and the unchecked karening that now populates YouTube, Facebook Live, and Instagram among other platforms.

Nightmare is ultimately meant to be hopeful, Harris said. While he wrote the script years ago—it predated his release of 4 Freedom in June 2020—the moment to produce it “never felt right.” He wrote and released other material, sitting on Nightmare. Then last fall, he started thinking about how the film fit into the legacy of Black horror, from Michael Jackson’s “Thriller” to Jordan Peele’s 2017 Get Out. The idea stuck. He pulled in a team of past collaborators, including students from Writer’s Block InK who danced and acted in his short film Black Joy last year.

He and team members filmed Nightmare over a day at Mystic Luxury Cinemas in the fall. He said that eventually, he hopes it becomes well known enough that it’s a video people reach for around and beyond Halloween, just as they still go back to “Thriller” year after year. He’s hopeful that viewers will take its message—to get off their screens, let the black boxes and status updates go, and start checking in with each other in the real world—to heart.

For Harris, whose work often brings him into very white spaces, it’s a message he practices in real time. When he’s not writing and producing, Harris is a program associate for the Connecticut Office of the Arts, a branch of the state’s Department of Economic and Community Development. During his tenure, he’s worked with colleagues to broaden the scope and diversity of the office’s grantmaking practices. He’s launched discussions that center Black artists and non-Black artists of color. He’s been carrying a vision for equity that his predecessor, Adriane Jefferson, championed before she took a job with the City of New Haven in 2020.

And along the way, he said, he’s experienced microaggressions. A lot of them. For him, Nightmare “is a real call to action to make sure that we take care of our children, that we take care of the issues around us,” he said. “There’s hope when we take control of the narrative and we can write a different story.”

Cultured AF Founder and Executive Director Juanita Sunday, who worked as a producer and production manager on Nightmare last fall, said she was glad to support Harris in getting the film out into the world. When he asked her to join the project, she hadn’t yet heard the music. But “I knew it was going to be an important piece he was developing,” she said. She was excited about bringing film back into the music video genre.

The more she got to know Nightmare, the more the project spoke to her. After summer 2020, Sunday watched as a new wave of activists emerged. They were ostensibly committed to social justice, yet unwilling to listen to the people who had been doing anti-racism work for years. As a Black woman, she got to a point where activism in the streets or protesting wasn’t the healthiest way for her to engage. Instead, she poured herself into supporting fellow artists.

In a phone call earlier this week, she remembered watching dozens of black squares go up in the wake of George Floyd’s murder, and wondering what an actual change would look like. A year and a half later, she’s still wondering.

“It’s most relevant when you are dealing with people who think they are doing the work, but then they aren’t taking the time to listen to marginalized voices,” she said, relating it back to Nightmare. “There are people doing things that they’re complicit in, but they don’t want to face it. It’s seeing people not wanting to take the criticism or the feedback.”