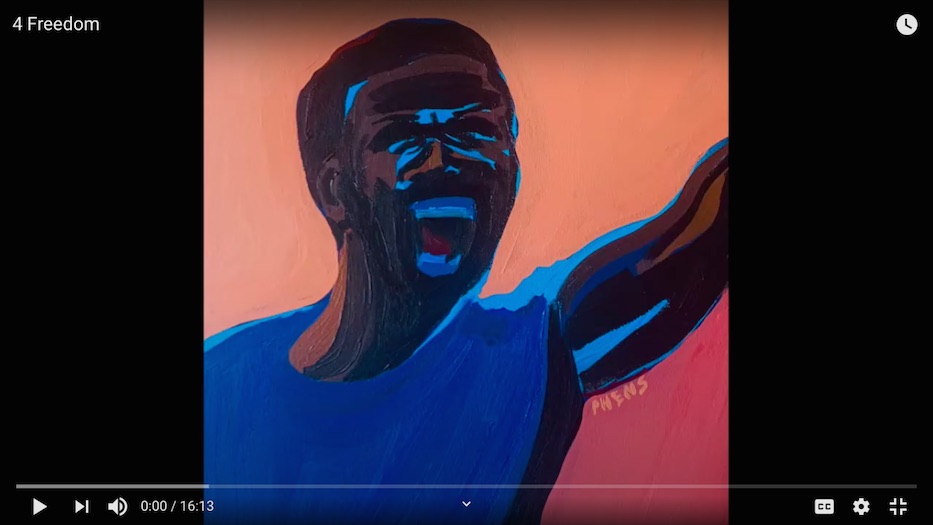 The sound of steely, hollow drums ring a listener right into being. Synth ebbs and flows, like a pipe organ that’s suddenly found itself at a techno festival. Musician Kolton Harris comes in, his voice winding through the sound.

“We needed more than apologies/We need a change in the policies,” he sings. “Black moms holding the bodies/Of their babies lost while you sleep.”

The piece marks the second track of 4 Freedom, a new EP from Harris, musician Jaden Williams, guest artist Moriah Jackson and Zachary Koval of Lunara Studio. Harris released the collection on Saturday to coincide with the Fourth of July. Cover art is by the painter Roshane Stephenson, a multimedia artist and social media content developer for the Cultural Coalition of Southeastern Connecticut.

“I feel incredibly excited, grateful, and really full,” he said in a phone interview Sunday afternoon. “I’m incredibly proud of this body of work. I feel elated, but also energized and excited.”

In many ways, 4 Freedom is a direct document of the way Harris is experiencing the current moment. In June, the musician released “Another One Dead” and “Black Joy,” both singles responding to the state-sanctioned murder of George Floyd and ongoing fight for Black liberation (the second was released on Juneteenth).

Neither track pulls punches: they ask for multiple listens, and are meant to catalyze discussion around Black lives taken prematurely, Black joy, the parallel pandemics of COVID-19 and racism, and 401 years of normalized oppression of Black people.

After releasing them last month, Harris kept hearing new lyrics in his head, as if the tracks were letting him know he wasn’t done with them yet. He had several role models sitting on his shoulders: he’s been getting into David Bowie, as well as longtime heroes Kendrick Lamar, Michael Jackson, Prince, and Janelle Monae.

“I understood that there was a momentum around everything happening,” he said. “Everything was changing. I would be walking to the bathroom and hear something and voice record it, and then I would show it to Jaden. That’s how it started.”

He kept writing, churning out what he described as “lightning in a bottle” as lyrics came to him. He recorded snippets, re-recorded, and edited. He played with rhythm and layered vocals. Last month, he and Williams left quarantine to visit Lunara Studios, where they recorded over two 15-hour days.

In the first session, Harris and Williams experimented with drum sounds over and over, trying to get an echo that was warm and wide enough to sound “like they were going right into your soul.” In the second, he walked into the studio at four in the afternoon, and didn’t leave until after sunrise the next morning. Harris praised Koval, whom he called a vital partner on the project.

“He's just a master when it comes to the art of engineering,” he said. “When we put our heads and hearts together, it was a really humble experience. We just were conduits for the sound.”

That energy is palpable on the finished EP, which feels more like a song cycle than a series of distinct tracks. In the intro, Harris has reimagined “Another One Dead,” stripping the song down to its musical bones. The beat becomes a slow, steady heart monitor; the words “I can’t breathe/please help me” loop over each other. Harris cries over them, his breath quickening.

By the second track, influences like Monae and Kimbra start to trickle through. Harris sings over a big, stadium-like drum sound, tying over two centuries of slavery to current-day police brutality with each lyric. Then his voice is doing double time: he sing-stutters over the track, like a record that has caught on the weight of history. It works, collapsing a line on lynching with the one that took place on a Minnesota street in broad daylight.

Harris also allows himself to be vulnerable and exuberant: “Black Joy” is an earworm of a thing, with messages that come one after the other. When his voice comes in rumbling over keys—"All this melanin/Is a gift/From the God/Who made the earth/If you think/It makes us less/Check your thinking/You’re absurd"—it’s understated, pensive. A listener can crawl into the space between words and stay there for a while.

But it’s a fake-out: Harris coasts into the hook and a listener wants to go with him. He sings in half-prayer—"we got that joy/we got that joy and it feels like magic”—and something shifts. Synth floats in fits and starts. A beat drops. Harris pulls out history, jumping from the realities of chattel slavery to Colin Kaepernick’s decision to kneel during the national anthem.

It sets the right flow into the title track, a poppy, funky homage to Monae that becomes a deliciously danceable protest anthem. Jackson is a powerhouse: she equals Harris’ energy and then tops it, her vocals soaring over the track as she chronicles statues coming down and the need for change. Around them, pumping, synthy drums seem to suggest that the only way out is through—quite possibly by marching in the streets.

Harris keeps that call for unity going through the final track, which references the historical creation of race, concept of performative allyship, and existence of white supremacy. A listener is wrong to dismiss the track as too preachy: it includes a cappella singing, lushly layered vocals, naked keys, and funky synth and keys all in a few minutes. It isn’t an accusation. It’s a prayer.

“My hope is that people genuinely take time to chew on it, because it's so multilayered,” he said. “All of the styles and sounds were really intentional. The process was about tapping into sounds that were warm, that were inviting, and that were terrorizing and had a call to action. The project is about hope in the wake of the atrocities. There's the hope that it unites people, all people.”

After releasing the EP, Harris spent the Fourth of July with his family. He said that getting a multigenerational Harris-family stamp of approval was some of the most exciting praise he’s received in a long time.

“This moment is a reminder that we have work to do,” he said. “It makes me feel hopeful that there are enough ideas in the DNA of our country to change if it's honest about its roots.”