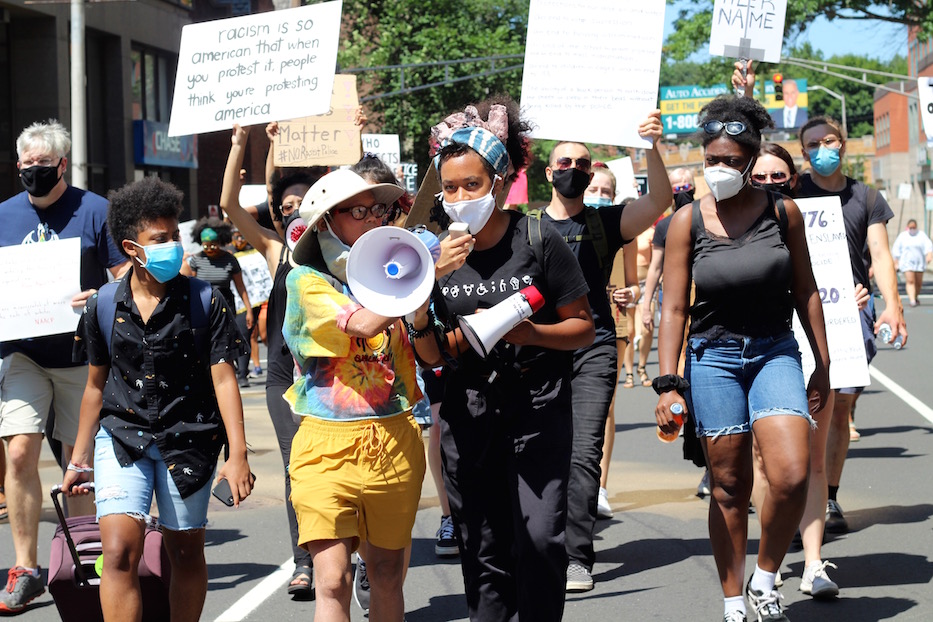 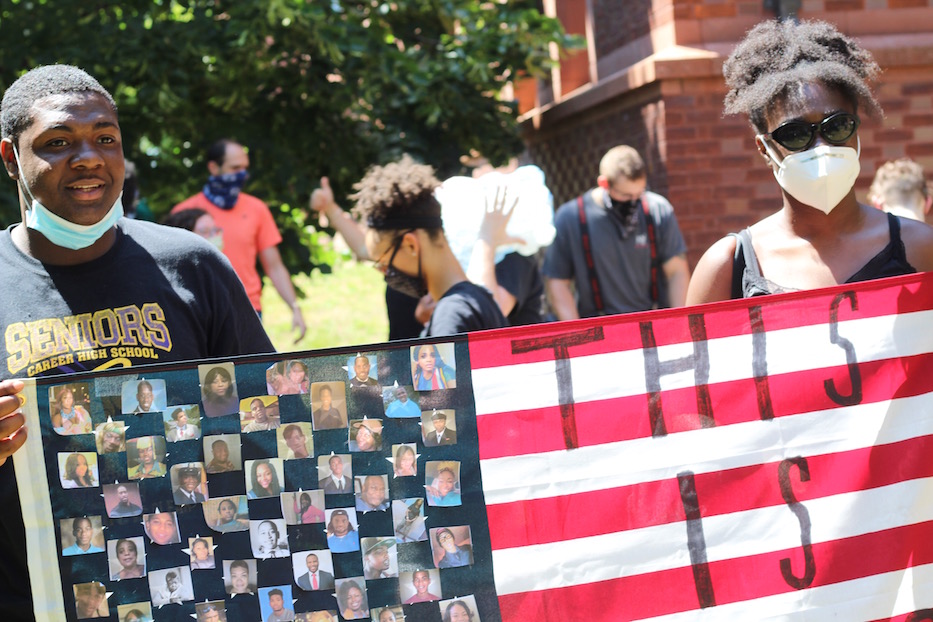 The rich inheritance of justice, liberty, prosperity and independence, bequeathed by your fathers, is shared by you, not by me.

The words boomed over the New Haven Green as Alexis Chang lifted a megaphone to her mouth.

The sunlight that brought life and healing to you, has brought stripes and death to me. This Fourth of July is yours, not mine.

Those words were written in 1852, by the abolitionist and Black intellectual Frederick Douglass. Saturday, Chang made them her own as she joined over 100 marchers on the New Haven Green, to protest the Fourth of July with calls for Black and queer liberation, police abolition, fully funded education, and joy and rest as resistance.

The march, which was organized by CT Against Brutality, wove from the New Haven Green up to the Yale Peabody Museum of Natural History, down Hillhouse Avenue, and through downtown to New Haven Police headquarters on 1 Union Ave. Over 100 attended, including several youth and soon-to-be first-time voters from surrounding suburban towns.

In addition to names that are often forgotten at Black Lives Matter protests—Tony McDade, Rhia Milton, Dominique “Rem'mie” Fells and tens of others—they pulled words from the past to address the present.

It marked the second reading of Douglass’ “What to the Slave Is the Fourth of July?,” after a video collaboration among the Beinecke Rare Book & Manuscript Library, Institute Library, and several New Haven notables dropped earlier this week. Unlike the multi-part reading, this one unfolded under a boiling sun, with cars honking along in both dismay and support at points along the way.

Over and over again Douglass’ words resonated, making clear a tug-of-war that still exists between the idea of a free America and the reality of a country in which Black people are killed, racially profiled, and economically oppressed because they are Black. On the Green, Milford-based organizer Siobhan Ekeh introduced the reading not with Douglass’ backstory but a little of her own.

A rising senior at Jonathan Law High School and the Educational Center for the Arts, Ekeh said she woke up Saturday feeling angry. As a Black woman, she spent part of the morning bracing herself for images that she knew would soon flood social media, of white classmates (“or as I like to say, people without color,” she said to laughs) on the beach or in their homes, decked out in red, white and blue.

Where Douglass pointed to the hypocrisy of the holiday in 1852—11 years before the Emancipation Proclamation, and 13 years before the first Juneteenth—she noted the weight of history over 150 years later, after chattel slavery had morphed into Jim Crow era policies, and Jim Crow into the prison industrial complex.

"It only represents the independence of rich, white, cisgendered, able bodied men,” she said. “And we’re not here for that. The fact is, anybody celebrating the Fourth of July this year does not care about my life enough to put aside their own whiteness for a second and say that this day does not celebrate my independence as a Black woman.”

“The truth of the matter is that we’re not all free in this country,” she continued. “You can say, yes. We are no longer enslaved. We are no longer in physical chains. But if we’re still living in a country where Black people cannot walk down the street, or drive their car, or sleep in their own bed at night without fearing for their safety and the safety of their families, then we’re not free.”

Somewhere between 1852 and 2020, Douglass’ ghost stirred and rested a little easier.

Back on the Green, speaker after speaker echoed her, recounting racial slurs they had heard in the hallways of their schools, friends they had lost to police violence, and moments of profiling they and their friends had experienced.

Chang stepped onto a stone bench with Nana and Cecilia Dondorful-Amos, suddenly towering over the scattered crowd. Before reading sections of the oration as a group, she asked: “What are we celebrating America for?”

A few attendees snapped, gave little cheers through cloth and paper masks, and leaned in a little closer. Some, at the periphery of the Green, lifted handmade signs. 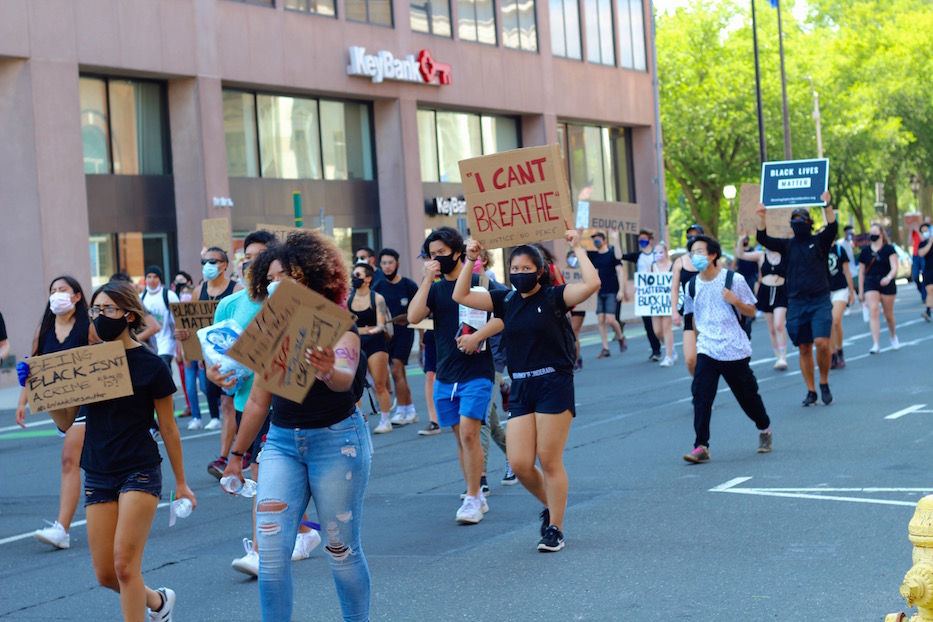 She outlined a system in which immigrant families are still stopped and turned away at the country’s borders, their children “torn away from their families and kept in cages.” She spoke about Black people, including Black trans people, killed by law enforcement with no legal recourse. She denounced President Donald Trump for turning to racism, sexism, misogyny and homophobia on a daily basis, including a July 3 call to attack protesters.

In her fiery retort was another voice—Douglass, who pressed hundreds of abolitionists in New York to consider how they could be free when so many people were not. On the day of his speech, he had asked the question just slightly differently: “Are the great principles of political freedom and of natural justice, embodied in that Declaration of Independence, extended to us?”

When he first posed the question, only white male listeners in the audience could vote (white women’s suffrage came decades later, and largely at the expense of Black men). The Fugitive Slave Act had been written into law for two years.

In the same country where he had been born into slavery, Douglass saw a federal government that was allowed—and economically encouraged—to keep Black people enslaved in the name of capitalism. Judges were paid $10 to send a formerly enslaved person in a free state back to a life of enslavement. More insidiously, he told his audience, judges only listened to accusers—who were white and male the majority of the time. That precedent laid the legal framework for racially oppressive policies for over 150 years. 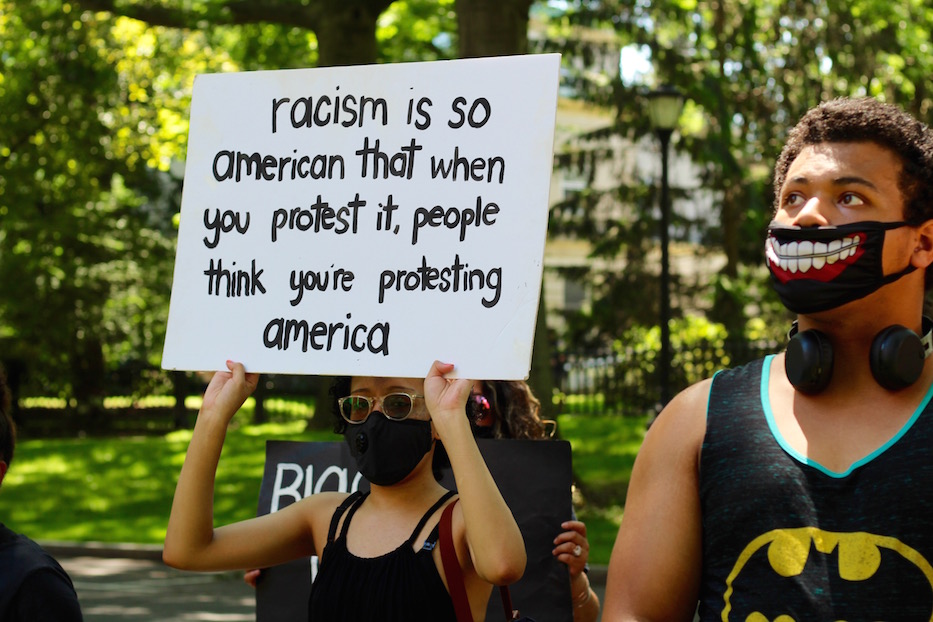 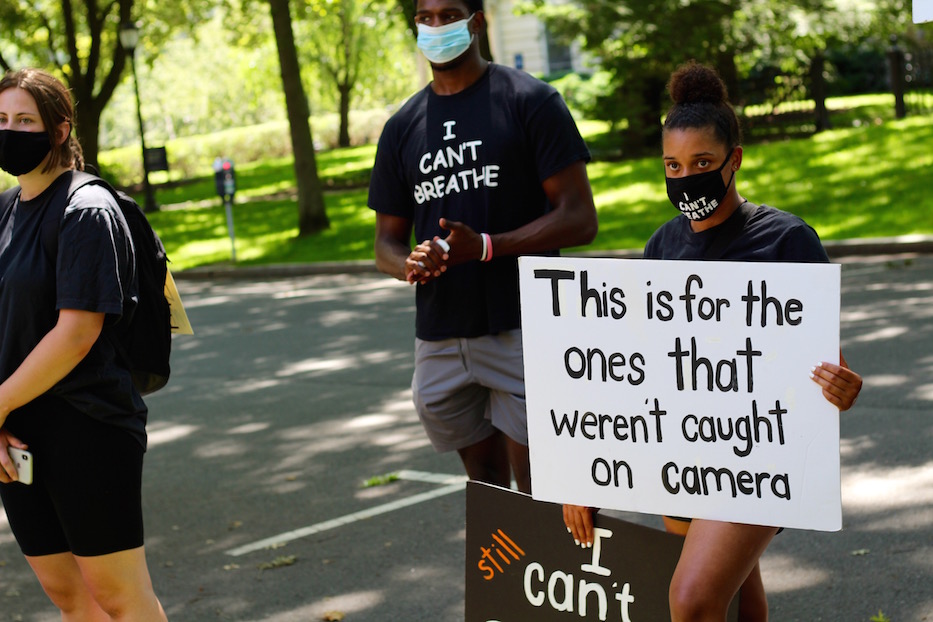 Those words followed attendees as they left the Green and marched up Whitney Avenue to the Peabody Museum, where students held a mini teach-in on Yale’s University's endowment and the now-dubbed “triple occupation” of New Haven by the university’s private police force, New Haven Police, and Hamden Police.

They followed the crowd as marchers set off back down Hillhouse, stopping in front of the home where President Peter Salovey currently resides. Ekeh led the crowd in call-and response, including “Liar, liar, colonizer!/Native people used to live here!” and “No justice/No peace!”

The group lurched forward, from Hillhouse onto Grove, then Whitney onto Elm. Around them, two police motorcycles sped past on the sidewalks, one narrowly missing a photographer on Elm Street. As the group hit State Street, Ekeh led the group in a chant, some marchers soon clapping as they walked. Buildings flew past them as they picked up their pace. 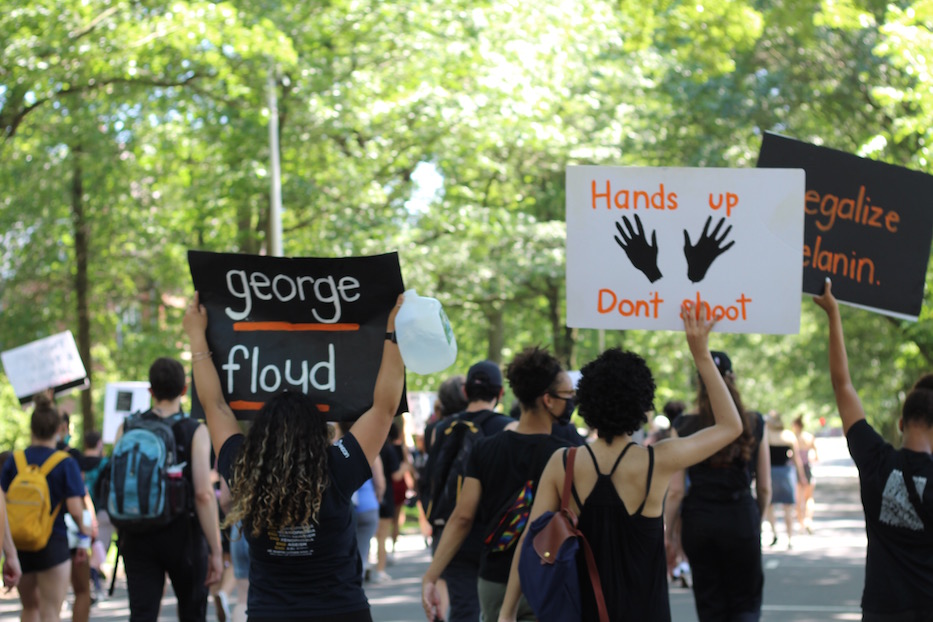 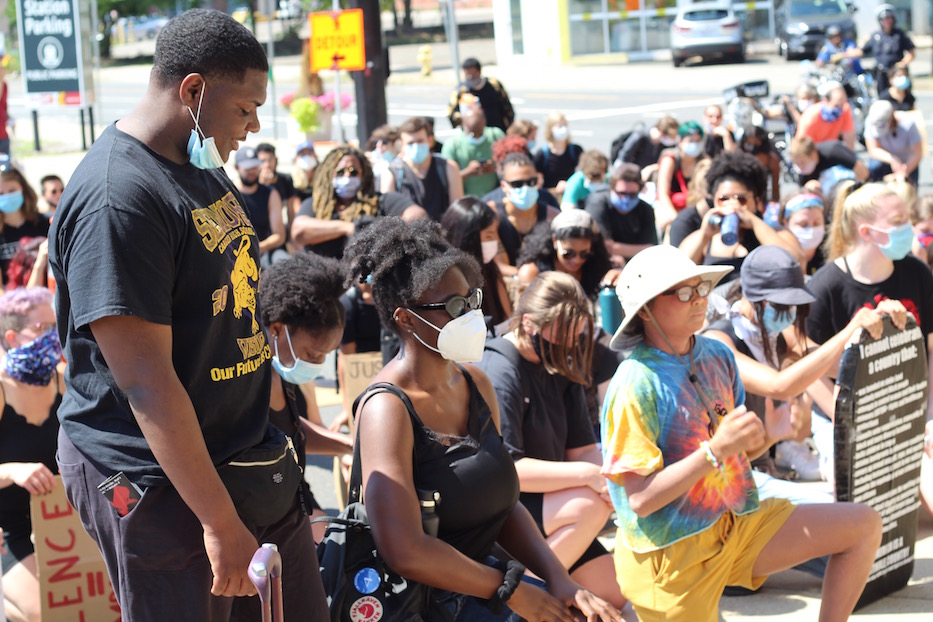 She slowed the group at the Knights of Columbus Museum, asking attendees to take a knee in honor of the Indigenous lives lost in the name of ostensible American liberty. She noted that the location felt particularly relevant: Columbus statues have been coming down around the state and the country. She suggested that many of them may end up at the museum (the museum has not yet accepted the statue).

As the group headed to the New Haven Police Department for another round of speakers, worlds collapsed. There was Douglass’ world, in which chattel slavery was still legal in the South, perpetuated by an industrial North, and Douglass was railing against it with eloquence and rage. There was the protesters’ world, where they were only partly free, and still fighting for full liberation in the streets.

Sometimes they flowed into each other. As attendees gathered on the steps of the New Haven Police Department, they listened to poetry, speeches, and original music all meant to reflect on the past—and effect change in the present. Ekeh turned a final call-and-response into a sort of prayer, asking attendees to turn to a neighbor, look them straight in the eye, and repeat a series of phrases. 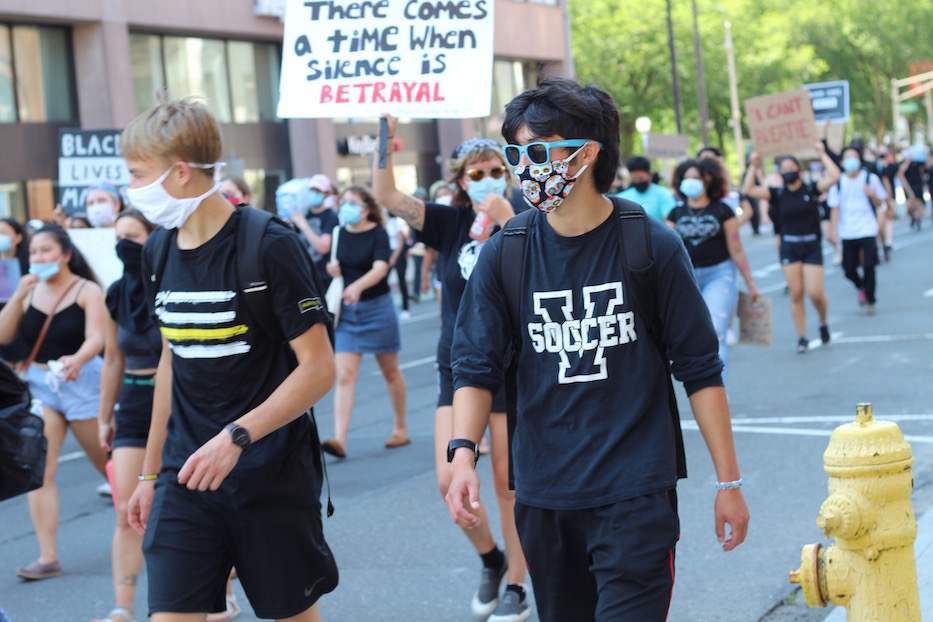 “You are beautiful! You deserve the best out of life!” attendees chanted in a bright, rising cacophony of sound. “You deserve financial security! You deserve secure housing! You deserve quality medical care! You deserve a quality education! You deserve kindness and love from your community.”

Hamden Town Council member Justin Farmer, who is running for Connecticut State Senate, urged marchers to fill out their census forms, register to vote, apply for their absentee ballots or show up at the polls for the state’s Aug. 11 primary. In the past month, he has rolled out an agenda for both Black liberation and one for queer liberation.

“Why are we here on the Fourth of July?” he asked. “What brings us here? This is a day that we would celebrate the conception of our nation. Many people today will be singing the Star-Spangled banner, yet we omit the third stanza, that talks about crushing the skulls of slaves who fought against their oppressors for their freedom.” 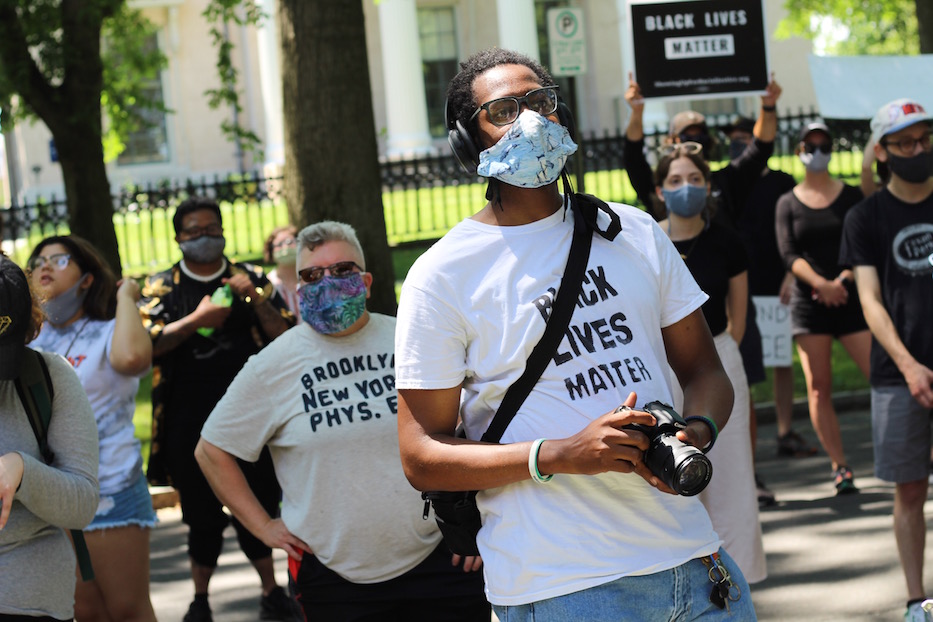 He described being stopped by police 33 times during his 25 years of life, including while walking and riding his bike around the district he represents on Town Council. He recalled getting pepper sprayed at the end of May, during a rally outside the New Haven Police Department.

He said he spends time thinking about his cousin, who is in pre-trial proceedings because of a minor offense—at a time when the carceral state has become a death sentence. In his reflection, attendees could hear whispers of Douglass’ address, when he described to the audience the 72 offenses for which a Black man could be killed in the State of Virginia in 1852. Only two of those same offenses applied to white men.

“We’re fighting for our freedom,” Farmer continued. “Many people are struggling right now, thinking about housing. Where will they be a month from now? Will they be in their home? Will they be with their family?” 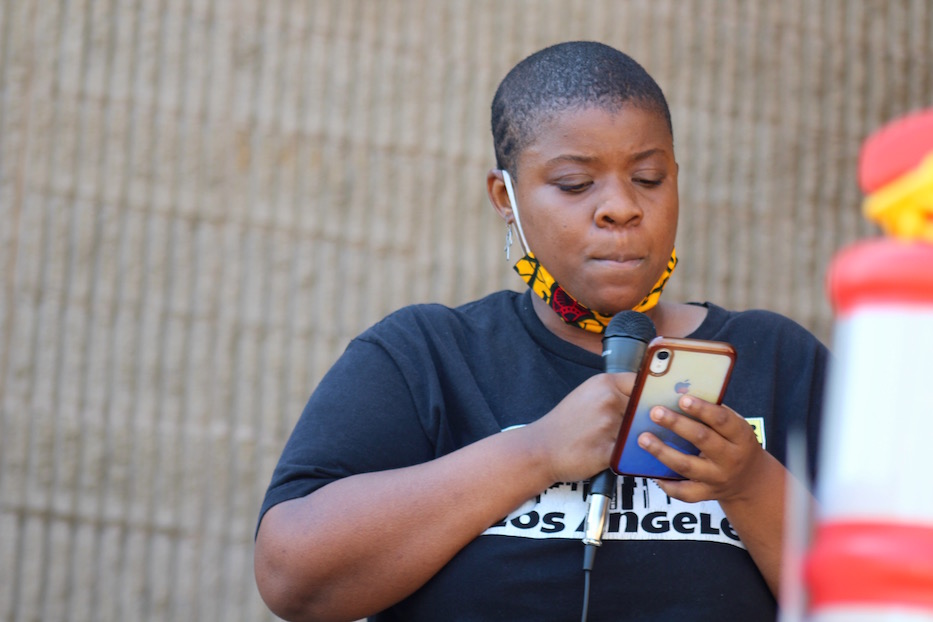 Taking the mic, West Haven-raised, Los Angeles-based filmmaker Ogechi Musa (pictured above) thanked the crowd for welcoming her back home to speak. With her words, she summoned lawyer, professor, and scholar Kimberlé Crenshaw, who first used the term intersectionality in her work three decades ago.

The term delineates the intersections of relative privilege or relative discrimination at which women find themselves, as race, class, gender, able-bodied status, legal status and so forth intersect. Crenshaw went on to launch the #SayHerName campaign at the African-American Policy Forum in 2014.

She outlined a system of policing with roots in slavery, tying past to present as she spoke. As she denounced the Fourth of July as “inherently anti-Black,” Douglass again sprang to mind. This time, it was his hopefulness—that a then-young America, just 76 years into its existence, could do better. Musa, still shaken by the violence she had seen, seemed to believe the same. 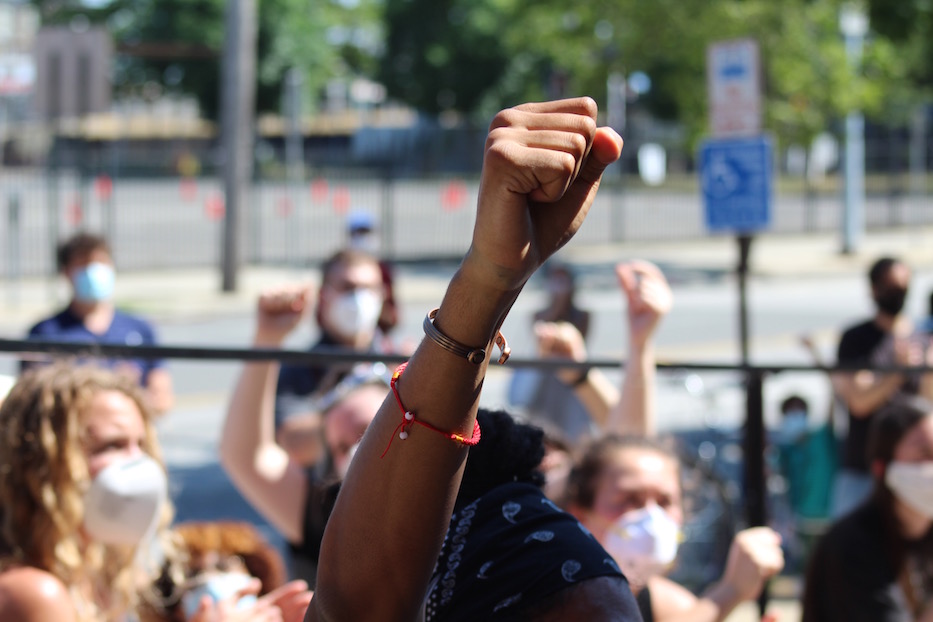 “The eye of the reformer is met with angry flashes, portending disastrous times; but his heart may well beat lighter at the thought that America is young, and that she is still in the impressible stage of her existence,” Douglass said 168 years ago. “May he not hope that high lessons of wisdom, of justice and of truth, will yet give direction to her destiny?”

Back in New Haven, Musa stood with her head high, eyes fixed on attendees. The New Haven Police Department’s tan walls framed her like a strange, outdated fortress in the middle of a changing city. It was time for moving forward, she told the crowd.

“The time for permission is over,” she said. “We take what is long overdue. We tear down the statues. We uproot everything. Because it has never worked. And it will never work. We need new soil. Or we will not grow. We keep fighting because there is strength and power in numbers.”