A Juneteenth Reminder: Protect Your Joy 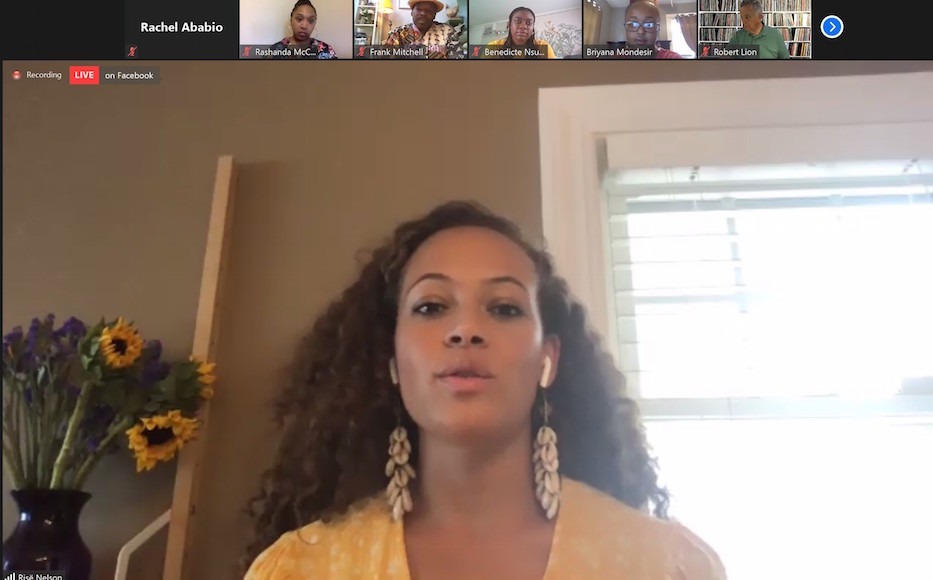 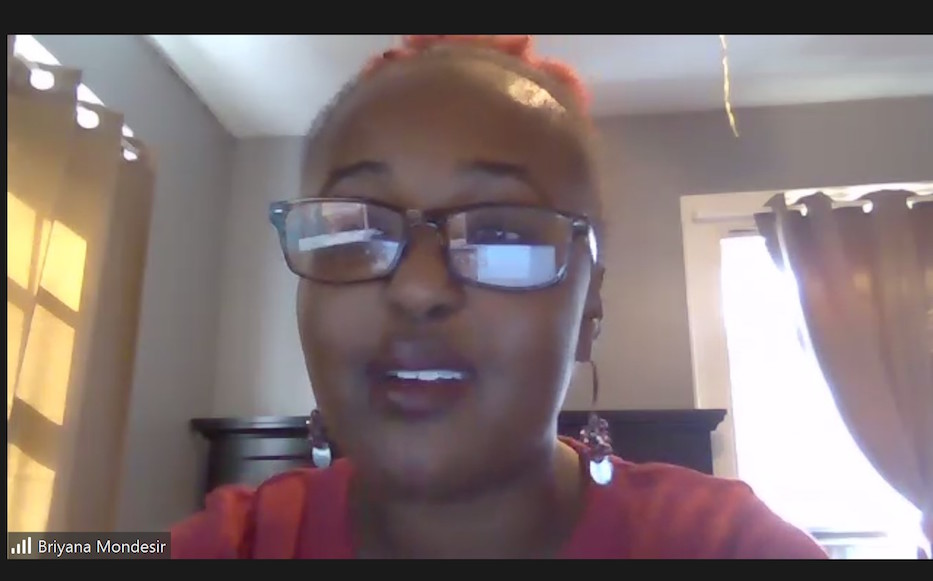 The question hovered over the audience panel. More than 100 viewers eagerly awaited a response.

“How do you maintain Juneteenth joy in light of police brutality, BIPOC death, and COVID?"

It was moderated by SEJ Deputy Director Briyana Mondesir, who is now a rising sophomore at Washington and Lee University. SEJ Executive Director Rashonda McCollum also facilitated some of the discussion.

SEJ is a youth-led, intergenerational non-profit organization based in New Haven. It advocates for BIPOC (Black, Indigenous, People of Color) representation and the representation of other historically marginalized groups through educational reform and anti-racist teaching. Despite the pandemic, students have continued to meet weekly via Zoom.

Thursday, it convened the discussion to honor the 155th anniversary of Juneteenth, which marks the formal end of chattel slavery in the U.S. On June 19, 1865, Major-General Gordon Granger issued Order No. 3 in Galveston, Texas. The directive unshackled the last slaves under the Confederacy, entrenched deepest in the South. 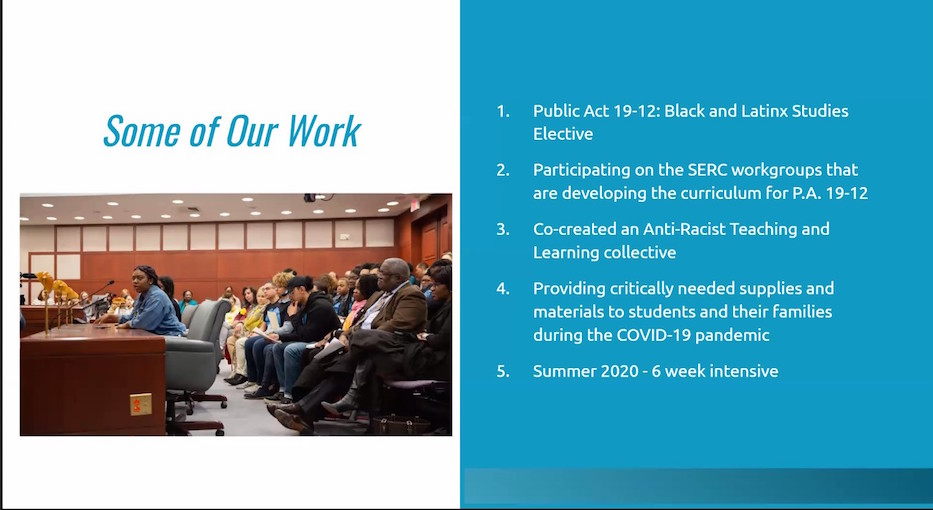 At the top of the discussion, McCollum noted that the group is still entrenched in anti-racism work 155 years after that first historic date. Last year, students from SEJ worked with State Representative Bobby Gibson, Citywide Youth Coalition, CT Students for a Dream, Elm City-UROC, and Hearing Youth Voices to pass House Bill 7082. The bill mandates that all Connecticut schools offer elective courses on Black and Latinx studies by July 1, 2021.

"While it's great that we were able to get this act passed, there's still a lot more work to be done," McCollum said. "What we really wanted during that time was a required course on the history of race and racism and required anti-racist and anti-bias training for all teachers."

McCollum and Mondesir continued that work during Thursday's event. In a poll that evening, only 62 percent of participants could define Juneteenth, and 99 percent had never learned about the holiday in school curricula. To educate attendees, Mondesir and McCollum provided fundamental questions for the event's panelists to answer: “What is ‘Juneteenth,’ and why do you think it’s important? How did the United States allow the enslavement of Black people to continue for more than two years after the Emancipation Proclamation?”

Mondesir also moderated as panelists addressed community members’ questions and concerns. The three panelists came from different careers and stages of life: Mitchell is the former director of the Amistad Center for Art & Culture in Hartford and has spent years as a writer, filmmaker and curator chronicling the rich, deep histories of Black Americans.

Nelson has almost two decades of experience in higher education and multicultural affairs. She is the first New Havener named to her positions as Assistant Dean of Yale College and Director of its Afro-American Cultural Center. N’sumbu is a Cooperative Arts & Humanities High School grad who has testified, organized, written op-eds and held teach-ins around building anti-racist curricula in the city’s schools. 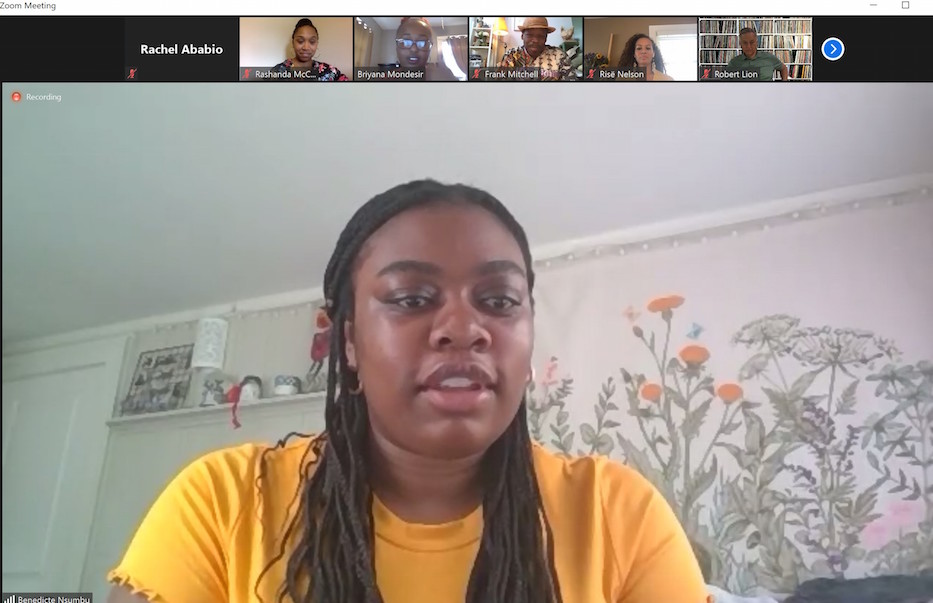 N'sumbu (pictured above) spoke to the youth on their level, with the passage of House Bill 7082 still fresh on her mind. She’d gone through the state school system, she explained. She’d seen internalized racism tell her peers to bury their Blackness deep. N’sumbu had read the history books, sat in the classes that discounted Black heritage, her heritage. Despite the gravity of her experiences, she took the time to lighten the mood with a recap of her latest Real Housewives of Atlanta binge.

Who’d told her about Phi Beta Kappa Society’s Edward Bouchet, a Yale physics alum and America’s first Black man to graduate with a Ph.D.? No teacher spoke about how New Haven had rejected Simeon Jocelyn’s proposal to build the first historically Black college.

Mitchell hadn’t heard any of that growing up in Ohio. During the panel, he explained that New Haven’s first Jubilee had actually occurred in 1784, when gradual emancipation reached Connecticut four years after Pennsylvania (the final documented sale of enslaved people in New Haven was not until 1825). It was a splash, the flourish of Black song, art, dance, and culture in the area. Free Blacks had danced and paraded in the Green past 1865 and clear to the present. Mitchell joined in when he first moved to New Haven; he’d never experienced Juneteenth’s Black brotherhood and love in the rural Midwest.

"Freedom comes in waves," he said. "It's a slow process, at least it has been for Africans in the Americas and the rest of the world. Juneteenth is the perfect mix of commemoration and celebration—it feels virtuous and joyful, but you can't deny its solemn nature. People feel incredibly tentative and anxious to talk about our history because it is such a minefield—it's not going to get any easier." 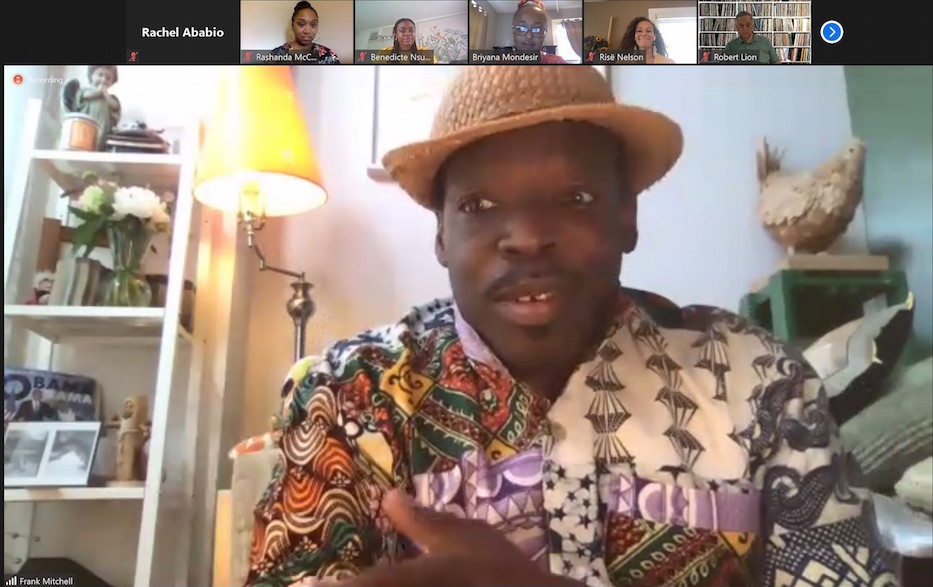 The Juneteenth informational quickly evolved into a discussion of Black history, systematic oppression, anti-Black racism, and the role that white supremacy has played for 400 years of American history.

"They tried to kill us," Mondesir said at one point. "Black people—we weren't supposed to get to this point. Even now, we're facing a lot of trauma and difficulties, fighting for survival as we face the crises that just keep coming."

Mitchell highlighted the unnamed Black soldiers that fought with the Union in the Civil War. He revealed that the sight of them confirmed rumors of the Emancipation Proclamation in the South. The declaration demoralized Southerners and invigorated the people they had enslaved to revolt.

He spoke about the brutality and savagery the Black community has regularly faced and continues to face. He spoke about the Black women whose names have been lost to the sands of time. Along with Harriet Tubman and Sojourner Truth, Black women were the backbone of efforts during the Civil War. They rallied for freedom, hid escaped slaves, acted as spies, and served as nurses to the wounded.

Nelson explored the feminist vein. She told viewers about the queer, Black scholar Moya Bailey and her concept of misogynoir, the junction of racism and sexism that millions of Black women face each day. She spoke about the erasure of Black history in schools (in New Haven, that hits home: the student body is 46 percent Latinx and 37 percent Black, while teachers are 73 percent white). She spoke on New Haven’s own Black Panther trials, the 50th anniversary of which fell in May.

As a New Havener herself, N'sumbu spoke about the sadness she felt learning that Mondesir had only recently discovered the history of La Amistad, a Spanish-owned, Portuguese-operated slave ship on which enslaved West Africans staged a revolt in 1839. After Americans intercepted the ship, the Africans were captured and jailed in New Haven.

A city trial for their freedom became an early Supreme Court case. The captives were freed, and able to repatriate thanks to money raised by abolitionist societies in the U.S. A monument next to City Hall commemorates that decision. Sierra Leone, from which they were originally captured, illegally sold into slavery, and treated as human cargo, remains one of New Haven’s seven sister cities. 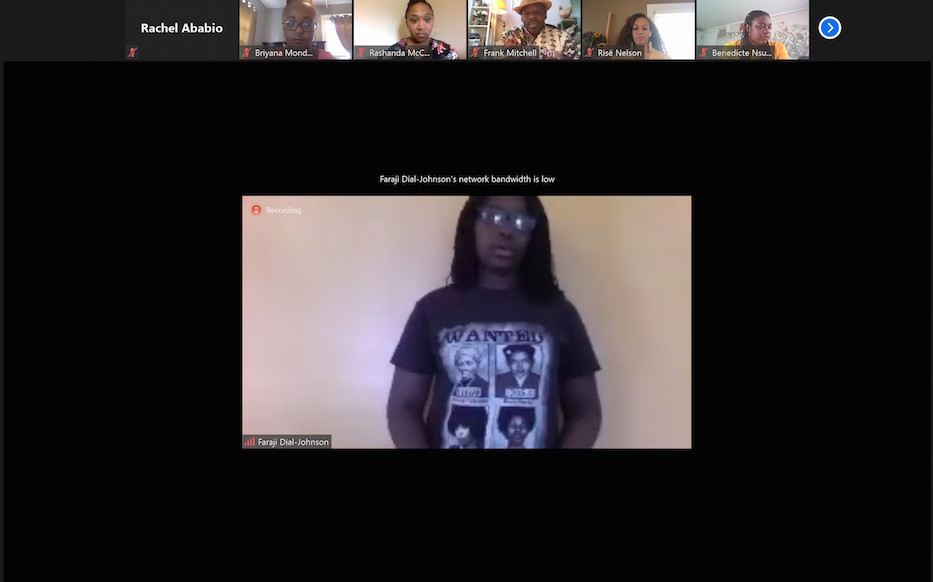 "Black history is also American history,”N'sumbu said. “It’s very disheartening and disappointing for a Black student to be in class and not learn these important events that happened, not just in America, but to your people. It just makes you feel disconnected. If we don't learn it, we disconnect from our ancestors, our traditions, our culture, our roots; we lose a part of ourselves, our identity.”

"The history that we are taught makes us seem one-dimensional," she continued. "Where are the facets of our culture, of our lives in American culture and history? It's always: 'you were slaves, and you fought, and you're free—then Obama came, and racism ended!'"

She threw her hands in the air in exasperation and continued.

"We're not just that, like, hello? There are so many parts of us that we don't acknowledge! We need to flush out those nuances and get to the roots of these issues so that we can undo them. It's so harmful that we don't learn the little details that aren't so little."

The panel pivoted to educational reform—not only curriculum changes but change for individual Americans on a "real, internal level."

N'sumbu reflected on her time in SEJ, and on the efforts the group made to pass House Bill 7082. They lobbied. They gathered student testimonies. They examined the racial and social climate of area schools. They saw teachers disregard Black history as supplementary, their Black students as supplementary.

Mitchell jumped in, challenging listeners to create spaces "okay to stumble in.” Many of the teachers he'd met personally were deeply uncomfortable speaking about race in any way, afraid they'd say the wrong thing. He explained that the wrong thing needed to be said, that those mistakes were the "first, crucial steps to change."

"Everybody should celebrate Juneteenth because we should celebrate independence in America,” she said. “By now, I think everyone can acknowledge or should acknowledge that the 4th of July was not Independence Day for all those who lived here. Black people, our voices, our issues, should be centered, amplified, and elevated every day, not just in the shortest month of the year.”

“And so, those who celebrate with us should keep that in mind. It should be recognized by all as a day for reflection and a call to consistent, ongoing action. We need many more voices in this. We need non-Black voices in this. I think that it's important that this must be a part of the curriculum, not just as supplemental information or optional information, but as core—this is truly integral to American education."

The discussion reached a crescendo upon the arrival of one question, read after student Faraji Dial-Johnson presented her poem “Bound.”

I’m watching my people get shot., one excerpt read. The anger bleeds,
Watching our people dying, / Without rights to the world.
It makes me anxious on what’s going to happen next.
What happens next?

An attendee, moved by the poem, wanted to know: how do panelists sustain joy amidst the grief of the current moment? They explained that that includes the parallel pandemics of racism and COVID-19, which has killed Black Americans at a rate three times higher than their white counterparts. Mics went silent for a moment as people thought.

Finally, N' sumbu spoke: "I've been trying to figure out how."

With the news on her phone so overwhelming, N’sumbu explained that she chose to engage with Black creatives and art. She streamed videos of Black artists in their craft, tried to find shows on Netflix with Black casts. She went "crazy surrounding herself with everything that represented Black joy."

Mitchell also enjoyed simple pleasures. He wanted to take Juneteenth to "cook something good for himself," outlining a traditional barbecue with a side of watermelon and Red Pop.

"I think self-care is a truly revolutionary act, especially at this time," she said. "To my fellow Black folx on this call, take care of yourselves. While we're in the middle of this global pandemic that is disproportionately infecting, affecting and killing Black people, we have to focus on our wellness, self-care, and wellbeing—mentally, spiritually, and financially.”

“We must educate others only when we have the capacity to do so. We all have our work to do in undoing a lot of internalized racism, misogynoir, and other forms of oppression. Take advantage of all of the resources that we have at our fingertips."

You can find some of those resources here.