On Juneteenth, Black Womxn Call In The Ancestors 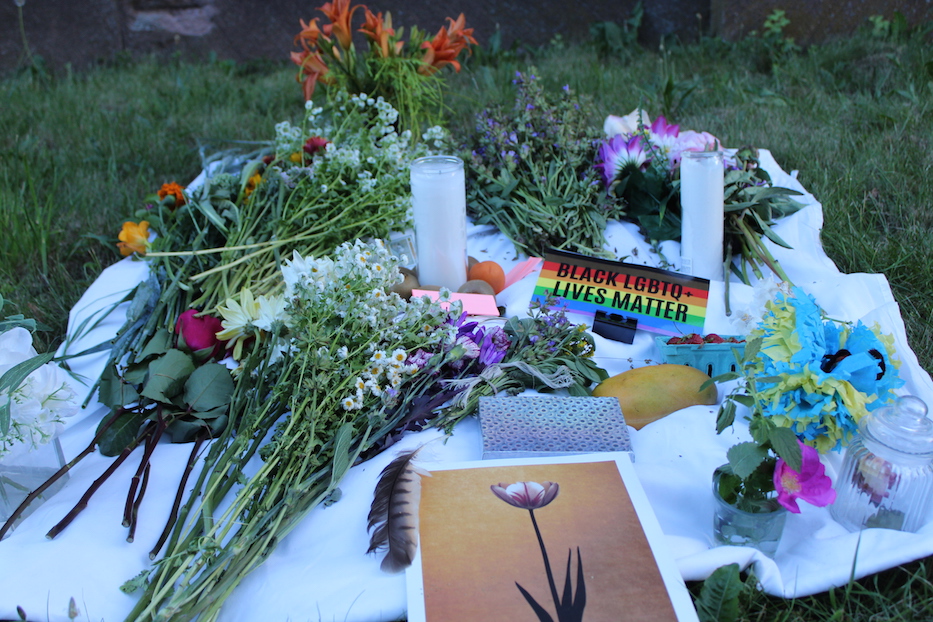 Sage cleared the space. Songs of revolution, healing, and kinship filled the air. People danced into the night to Afro-Cuban and Bomba beats played on conga drums. Even in moments of silence and meditation, hope and rejuvenation seemed palpable.

Friday night, the abandoned Goffe Street Armory came to life during a Juneteenth Community Altar Building, hosted by CTCore-Organize Now! and One Village Healing to honor the lives of Black women and non-binary people now among the ancestors. Groups held the event in solidarity with the Black Feminist Future campaign. 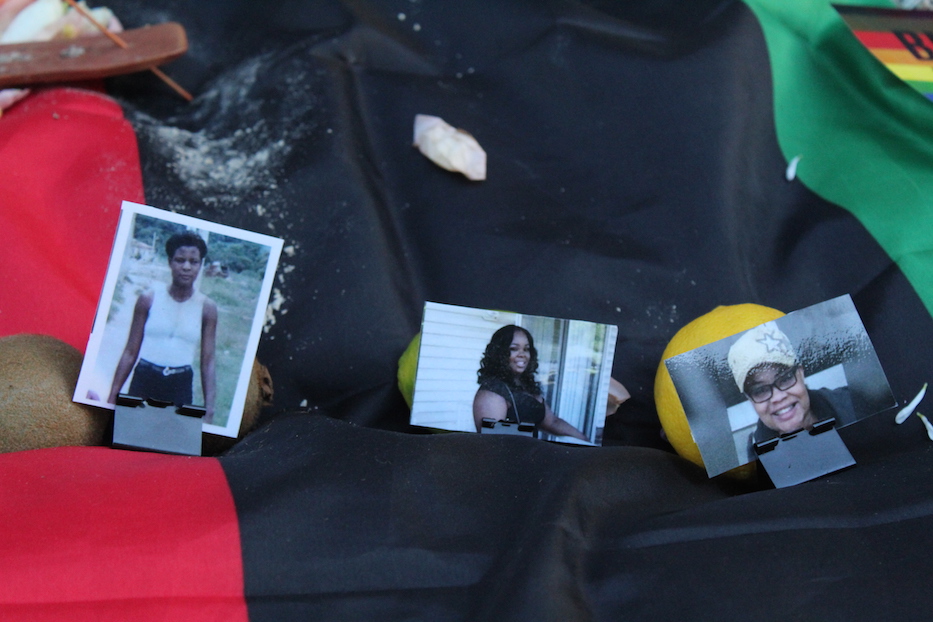 “This altar was designed to uplift Black womxn, and womxn spelled with an x because we recognize non-binary folks,” she said. “ Black womxn who are targeted and murdered by the police are often excluded from mainstream media.”

“Some of these womxn died days apart from men like Trayvon Martin, Tamir Rice, and more," she added. There was nothing in the news about them.”

Pan-African flags, kiwis, candles, and bright bouquets of flowers adorned the altar. Attached to the front of the altar were the names of Black womxn killed by the police or in jail. The womxn ranged in age from seven to 93. 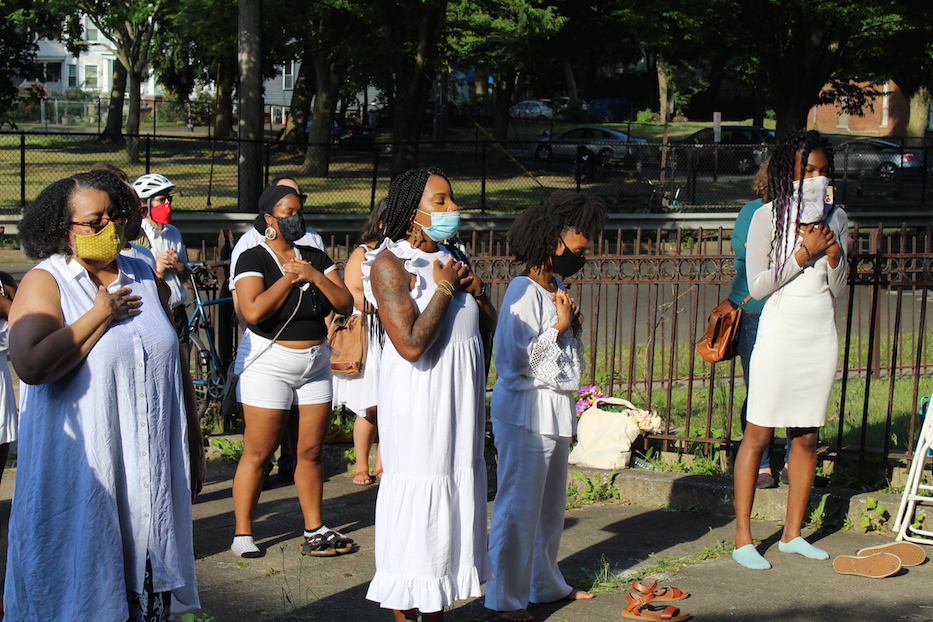 Shortly into the event, CTCore Executive Director Camelle Scott acknowledged the presence of an uninvited police car parked in front of the gathering on Goffe Street. The organization does not invite police as practice. Public Information Officer Capt. Anthony Duff said he did not have information on the police presence at the event.

Scott discussed the importance of defunding and abolishing the police in the journey to Black liberation.

“People are afraid that the world will fall apart without it [police]. People said the same thing about slavery being abolished. The police have not always existed, and it doesn’t need to.”

The New Haven Armory as the site was a purposeful decision by organizers. The usunsed building, which is owned by the city, sits squarely in the Dixwell neighborhood, which has one of the concentrations of poverty in the city. Now, it stands empty, home to the iMatter poster of Benjamin Brown, who would have graduated from high school this week, and a community garden for the neighborhood. 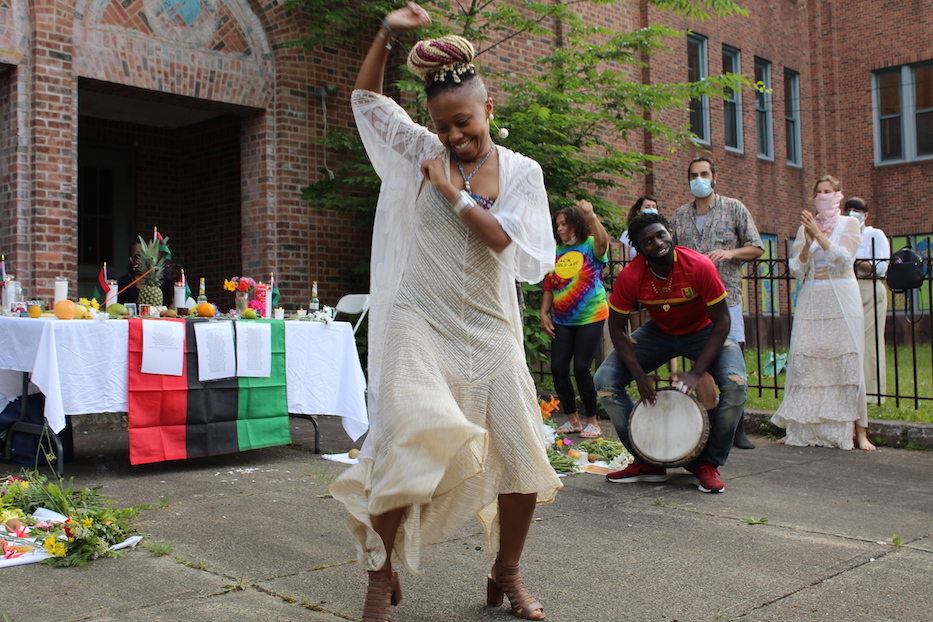 Raven Blake, co-deputy director of CTCore and co-founder and executive director of the LoveFed Initiative, asked the crowd to imagine the endless possibilities for the armory if New Haven Police Department (NHPD) were defunded, and those funds were put into the community. The crowd screamed back, with a vision for schools, libraries, community and recreation centers.

Jasmin Honegan, one of the organizers, read the names of a fraction of the women killed by police listed in the sheets. She asked the audience to recite the phrase “Say Her Name” after each womxn.

“Say Her Name is grounded in the fact that Black womnx who are targeted and murdered by the police never have their names said,'' said Blount. “Some of these names have only been spoken by no one aside from the womxn’s families.” 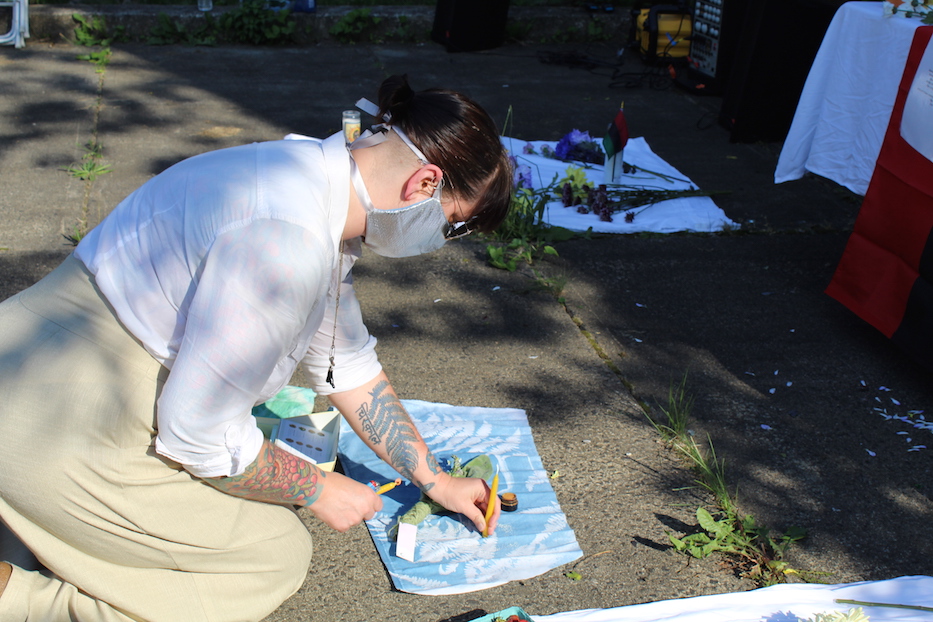 Honegan asked the audience to visit the African-American Policy Forum’s campaign #SayHerName. Launched alongside the Center for Intersectionality and Social Policy Studies (CISPS), the campaign brings awareness to the Black women and girls who have been victims of police killings.

Hanifa Nayo Washington, principal organizer and confounding practitioner of One Village Healing, asked all Black womxn to come forward closer to the altar and form semicircles. She asked the rest of the crowd to take one step closer.

“Stop being so fearful we are different. We can be together in our differences. I need you to see color because it is real and it is beautiful,” she bellowed to the crowd with a smile. The drums swelled with energy behind her. 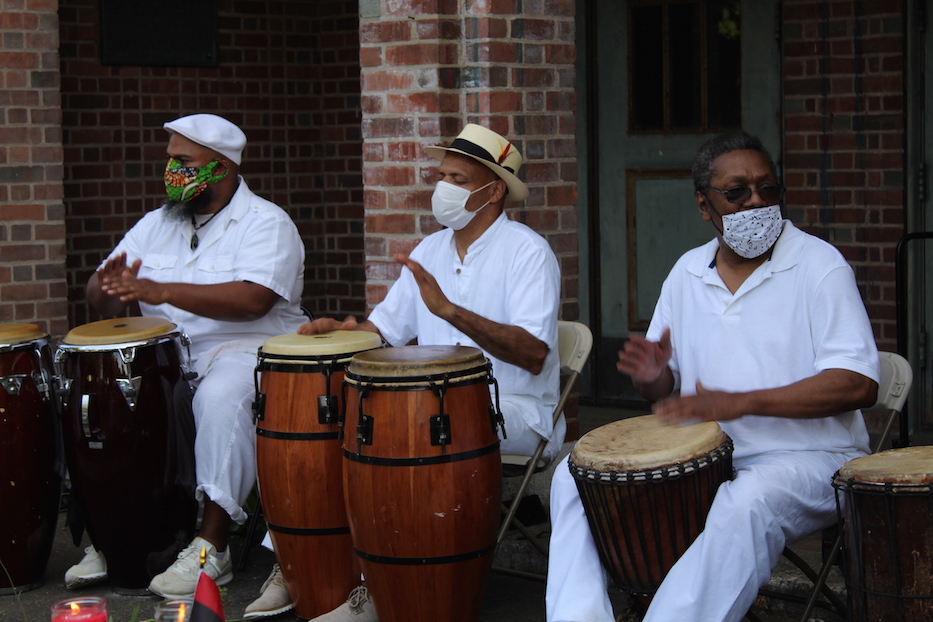 The Healing Drum society played alongside members of the Lost Tribe, including Jocelyn Pleasant and Seny Camara. They quickly found a rhythm, feeding off of one another. The Black women then turned around and faced the crowd.

“See us. Honor us. Listen to us,” Washington said.

She asked the community members to pray for the Black women all across the world. “Pray for their protection, peace, healing, and joy.”

She offered water from the West River in New Haven as libations to the ancestors for them to join. She also led the group in song singing, “Sweet Revolution” a song from her album, Mantras for the Revolution. 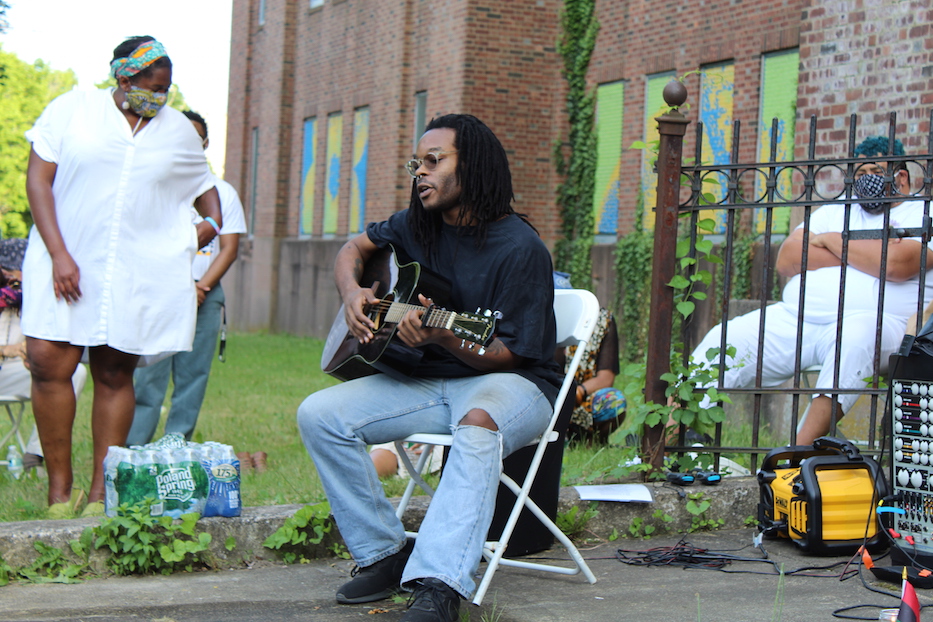 Chad Browne-Springer, who some know as the frontman for the band Phat A$tronaut, performed an original song, “Kin,” on his acoustic guitar as an offering. The song recounted learning about his ancestry and roots.

“Can’t go on and not even try to make my way from the dark times to better days,” he sang.

Song and dance are crucial to these movements, explained Washington. “Bringing the arts into the organizing space sparks joy and creativity,” she said. “This work requires creativity to imagine new possibilities.” 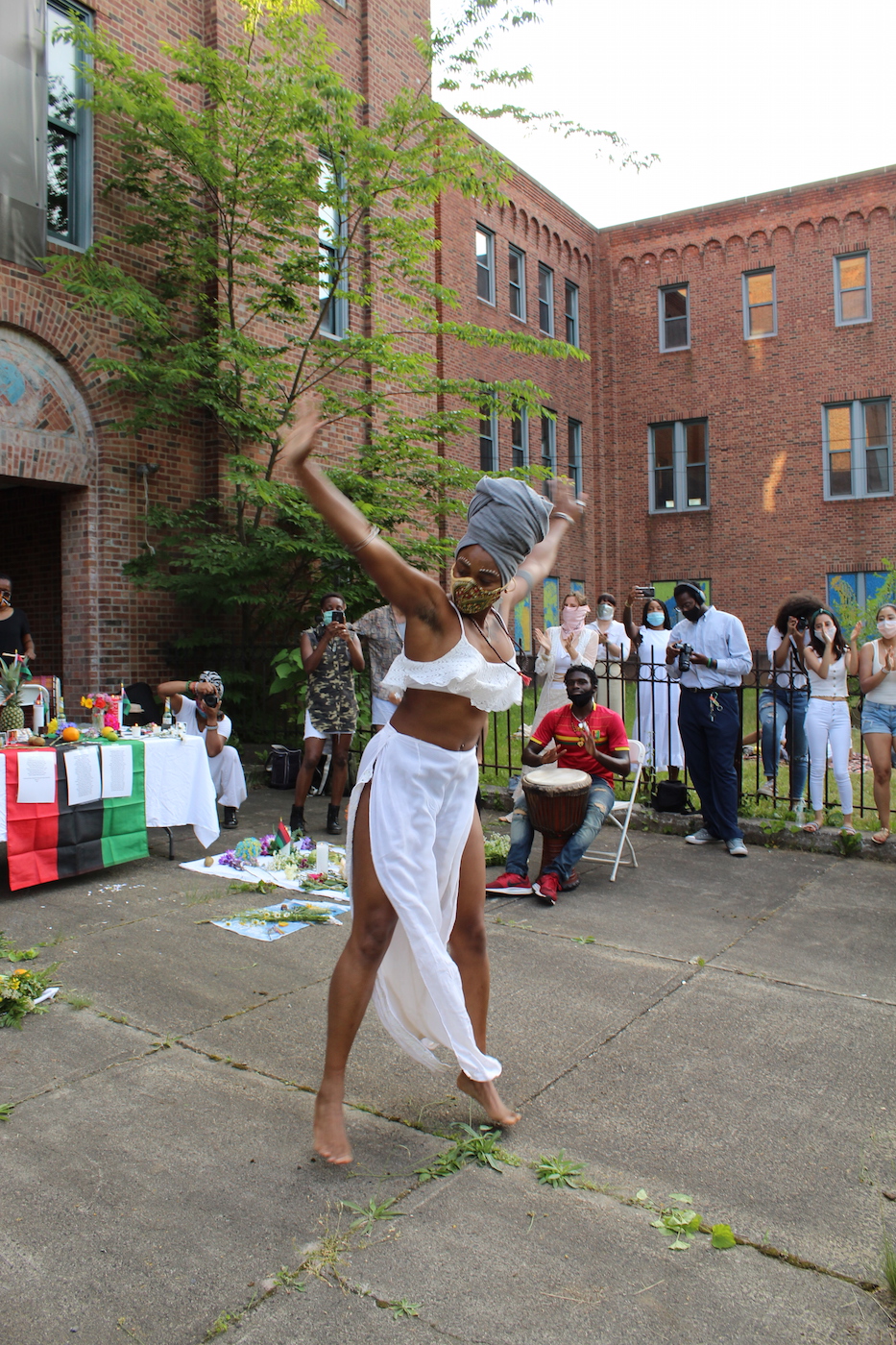 Before the end of the event, members of the audience and organizers alike danced with an intense passion as offerings to the ancestors. Camara brought his bright red drum to the center of the circle and people quickly jumped in matching his beats.

Gabrielle Oglesby, a Hamden resident, danced across the space with her skirt billowing in the air. 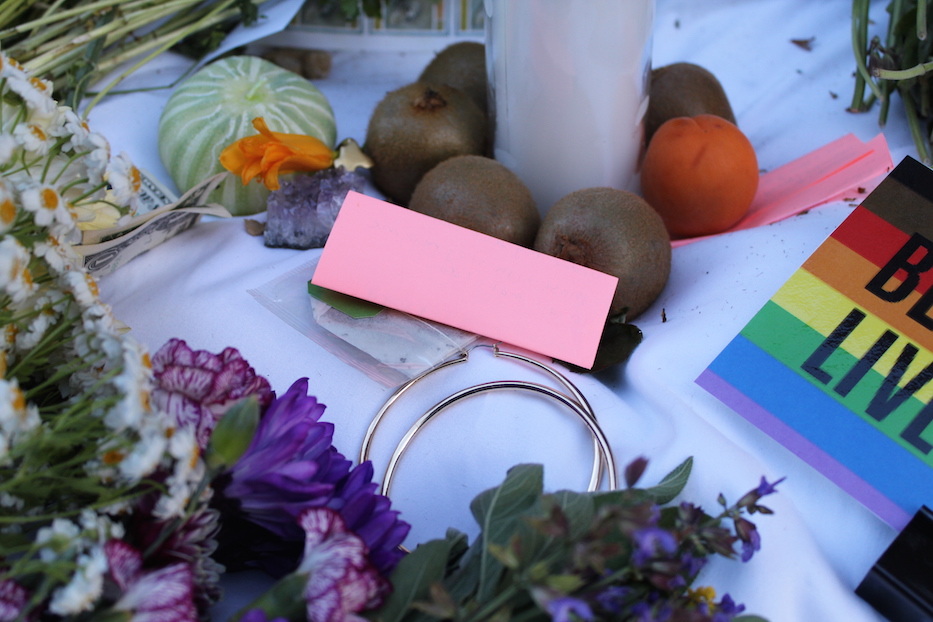 Audience members brought a wide array of offerings. Ashley Sprowls, a resident of West Haven, offered a pair of gold hoops, an amethyst stone, written prayers for her family members, and roses.

“It is a chance to celebrate our heritage so openly,” she said. “I wanted to give my ancestors the things I enjoy because I know they’ll enjoy them. These events lift up people’s spirits.”

Blake said she hopes that people found healing, a release of grief, solidarity, and hopefulness.

“I hope they don’t forget the energy of this time," she said. "I hope people take this back into their personal lives and learn anti-racist work is a lifelong work.”

The altar remained up through June 20.