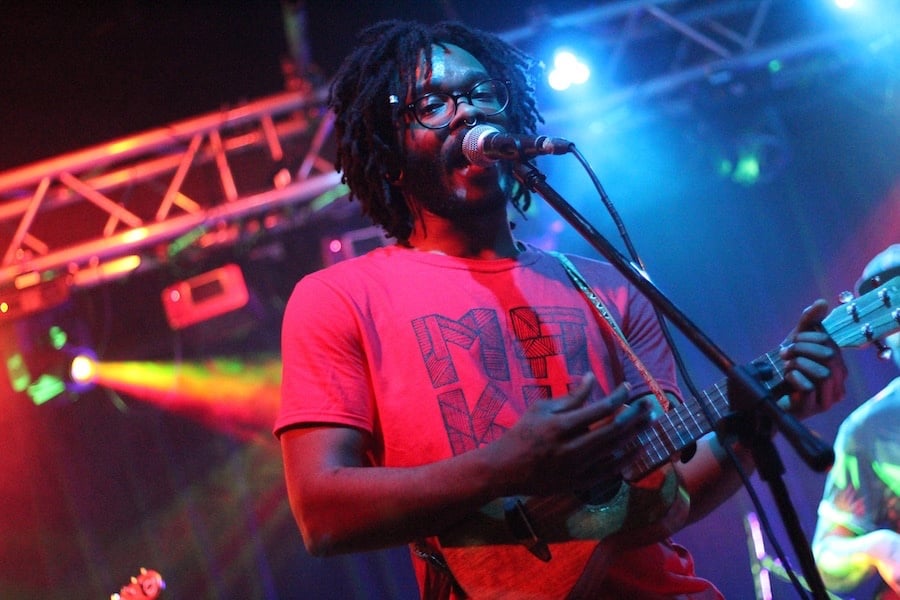 Chad Browne-Springer sat cross-legged on the floor of their bedroom, leaning forward with a handheld mic. A neat row of equipment and cup of cooling coffee sat just out of the frame. They swayed methodically and fielded requests through a screen. Almost 50 minutes into their set, a request for the song “Don’t Forget To Breathe” popped up.

Friday night, Browne-Springer sang out a week that collapsed digital and physical space, introduced and defined the term “social distancing,” and seen the state’s first three deaths from COVID-19 (a number that rose to five by the end of the weekend). An independent musician and frontman of the band Phat A$tronaut, they delivered it entirely from the floor of a closet-turned-studio. Watch the full video here.

The concert came as part of the fast-evolving The Quarantined Series, a near-daily online concert lineup organized by musician, promoter and powerhouse performer Sarah B. Golley.

A few dozen at a time tuned in to watch it live. By Saturday, the video had over 300 views. There is now an archived page for Quarantined Series concerts, where they all live in virtual space.

In some ways, The Quarantined Series speaks to a bizarre new normal that musicians and other practicing artists are navigating in the wake of COVID-19. Music venues, many of which were already struggling, are now closed by executive legislative order. Gigs have been cancelled not by the week, but by the month, many through May and June.

As they’ve found themselves without work, several performers have moved their sets online. Some post free videos with information to their Venmo profiles (Browne-Springer, for instance, is @phatastro). Others are offering virtual music lessons, dance tutorials, and art classes for which one can pay online.

But for a rapidly changing landscape, the musician opened the show with a sort of normalcy. If, that is, there is a normalcy to opening a show through a screen, from one's closet. Earlier this week, Browne-Springer tested out the quarantined waters with a video produced by New Havener Katie Jones, with the note that "staying in, still letting creation out. what more can you do."

This time, they talked about road trips, the sound of rain falling on the roof, the way they're spending time in quarantine. They lit a cigarette and let the flame dance on his mouth; they reheated a cup of coffee while a prerecorded track played on the background. It felt like a laid back, conversational Friday among friends. After a few minutes of onscreen setup and hellos, they announced that they were going to begin.

“If you guys have questions, if you want to have a conversation, I’m down for that too,” they said early in the evening.

Even online, their work hovers between lullaby, prayer, and trance. As a small swell of viewers appeared in the upper lefthand corner of the screen, they recorded a set of live vocals, looping them one by one on a series of boards that appeared at their feet. The sound filled the space and oozed out through screens across the state.

For almost two hours, they rendered the process intimate and stretched out through a screen, perhaps a testament to their own work as a musical shape-shifter. A pitter-patter of vocals got a tinny echo; longer, soaring hums were soaked in synth. The layers of Browne-Springer’s voice spooled and unspooled into each other.

Just short of the show’s 20-minute mark, they dropped a beat that sounded like fishhooks in someone’s throat. They soaked the track in breath. Minutes later, they pulled lovingly from their own musical inspirations, showing up Billie Eilish at one point. Then they delivered a looped cover of “I Wanna Be Your Lover” that Prince has deserved for a very long time.

It felt organic. Browne-Springer talked about a road trip, and listeners could close their eyes and imagine a car flying through the country's interstate system, with sound-soaked stops in Nashville and New Orleans. They took requests from the comments bar, unfazed by the lack of a physical audience or stage.

They spun smalltalk right into tracks. By the time they put lyrics over a lush, layered “Don’t Forget To Breathe,” it sounded like a friendly reminder and a benediction rolled into one.

For the artist, it  also feels meta. Earlier this month, Phat A$tronaut released a winding, rhapsodic, Tiny Desk Contest submission called “The Artist’s Struggle.” The song opens with a question that artists were asking well before COVID-19, and are asking with even more frequency now: “How am I going to pay my bills?”

In the video, they don't profess to have the answer. Instead, they sing through it for almost six minutes, the band jamming behind him. So too Friday—no band, although several members watched from home and wrote in with comments and requests—as he wound down the concert after almost two hours.

Those that stuck around got a shimmering, perfect finale: a slowed, soulful and stripped-down take on the band’s song “Motherland.” Without a band behind him, Browne-Springer turned into all the instruments they needed.

Honey-dipped vocals appeared where synth and keys would have been. The drum was missing, but something simmered and bloomed in its place. Lyrics wound upward in no particular hurry. They let the sound undulate until it had filled the room.

“Okay, yeah,” they said afterward. “I am done. Thanks for hanging. Thanks for tuning in. We’re all quarantined. We’re all in this together. So I wish you the best out in the world. Okay. See you soon.”