The sharp, earthy smell of white sage cut the air, first a whisper and then in thick, fragrant plumes. Norman Clement ushered people in one by one, the smoke drifting up from the burning leaves as they glowed at the edges. In his left hand, a feather directed the smoke around their bodies.

The aldermanic vote came earlier this year, after the city’s decision to remove the statue of Christopher Columbus in Wooster Square. An official monument committee has yet to decide who or what will replace him.

“We need to be seen, we need to be heard,” Clement said as music from a Crow powwow played from a Spotify channel dedicated to powwow music. “No matter what happens today will be a celebration of who we are. It is the one day that is specifically put aside for us. We still have to share it with Italian-American heritage day—and we should have a day for us. Everything that we see and touch here in the city belongs to native people.” 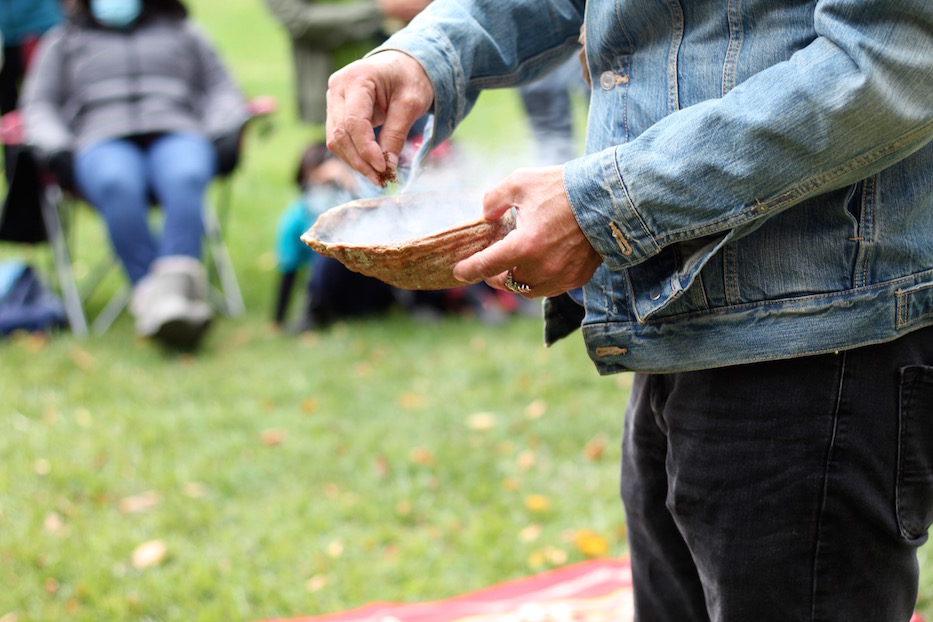 He added that it was particularly important to him to recognize the epidemic of missing and murdered Indigenous women (MMIW). In 2016, the National Institute of Justice reported that just over 84 percent of American Indian and Alaska Native women are subject to violence in their lifetime. Currently, only 13 percent of sexual assaults that are reported by Native women result in arrest, according to the U.S. Department of Justice.

Attendees rolled in slowly under a low grey sky, until suddenly a knot of them was moving towards Clement, ready to begin. Anthony Barroso, one of the first people to arrive, said he came out to the event because he shares a history with it. Barroso came to the U.S. from Ecuador when he was eight years old, and has spent years organizing around rights for undocumented people. He is currently an organizer for CT Students For A Dream.

As a queer person and a dad, he said he lives at his intersections: he is often labeled as Latino or Latinx, with which he struggles because he knows that part of his heritage also comes from the Quechua tribe. Some members of his family still speak the language, one of several Indigenous dialects that exist outside of Spanish. At 27, he grapples with what he doesn’t know.

“I’ve always struggled with my identity—where I was born, my heritage, and learning American history through a white lens,” he said. “I’m now doing my own work to read into that history. I’m talking to my parents and grandparents about it. Where did we migrate from? I believe every New Havener should be proud that we have this day.”

A third-year stage manager at the Yale School of Drama, Amanda Luke stood on the periphery of the circle with Putter, a mobility assistance dog in training. Born and raised in Houston, Tex., Luke is a citizen of the Choctaw Nation. Her dad is Cherokee and her mom is Choctaw. Until she went away to college at Syracuse University, “I grew up always knowing I was Indigenous and not knowing that much about it,” she said. Then she discovered the Native cultural center at the school.

Once she discovered the center, the trajectory of her work changed. She began working on Native theater initiatives, which she has continued in her studies and dramatic work at Yale and collaborations with the HartBeat Ensemble, including a multi-part radio drama premiering this fall. Her master’s thesis is on decolonizing theater.

She watched as slowly, a circle formed on what had been a quiet, grassy part of the green. Clement and Richard Cowes or Soaring Bear began a smudging ceremony that opened the event and cleansed the space. Clement is a confederate member of the local Quinnipiac tribe and a member of the Penobscot nation. Cowes, who lives in West Haven, is a member of the Golden Hill Paugussett Indian Nation. 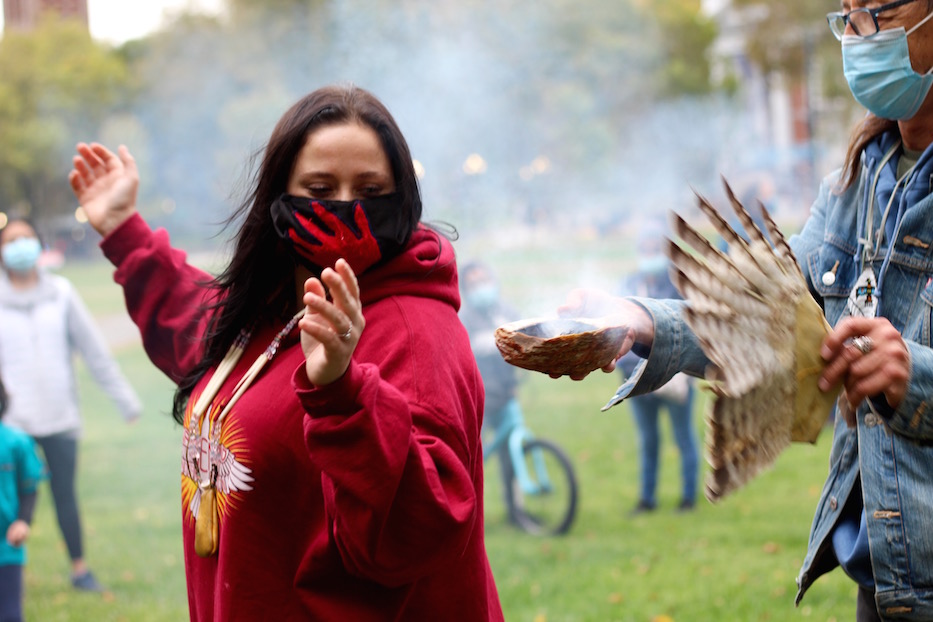 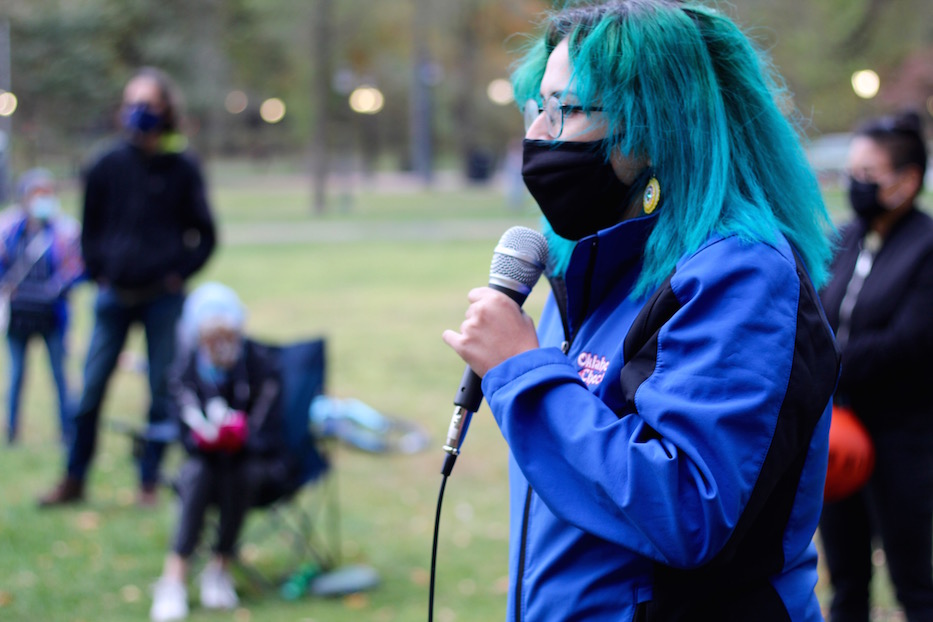 One by one, people stepped over to Clement: extending their arms and turning slowly as the scent of sage covered them. The community had come out, he observed: members of the Golden Hill Paugussett stood beside jackets that read “Oklahoma Choctaw,” masks patterned with symbols from the Squamish Nation and at least one Taíno sun.

Enedelia Cruz, who is from Oaxaca, came into the smudging ceremony with her young daughter strapped to her chest and sons at her side. She extended her arms as the sage smoke surrounded her. Others, following, did the same. When no one was left, Clement stepped forward.

“I want everyone to think about where they are today,” he said. “I always try to remind people that this is Quinnipiac land, stolen land, as all of our lands are stolen. No matter what they want to tell you about how we sold our land, or made treaties to give our land away, that never really happened. If you think about yourself and where you live, would you just give up your home and walk away?” 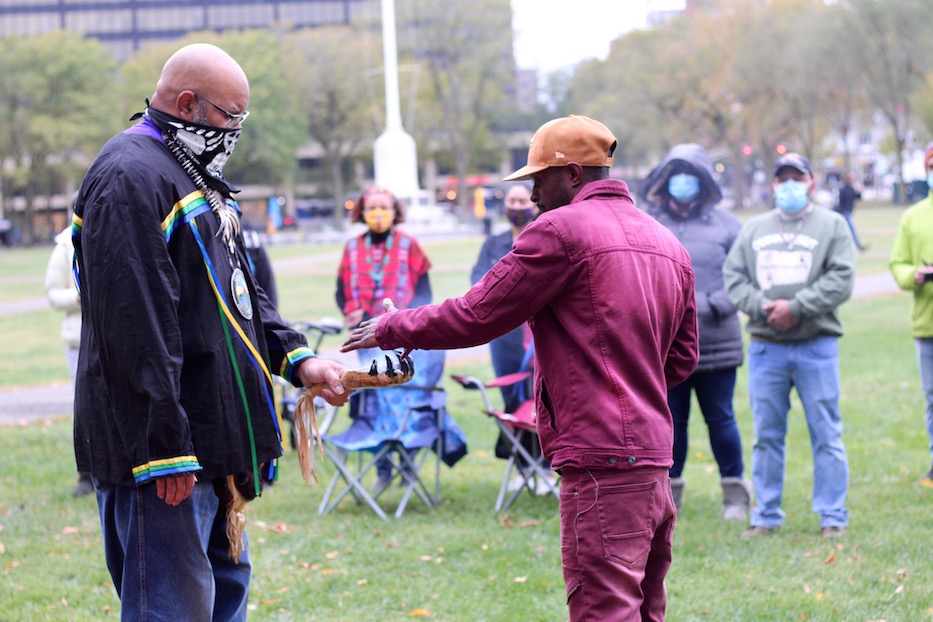 Other members of the circle walked forward, speaking and often raising their voices in song. Blessing the land, Aurelius Piper, Jr. urged attendees to open themselves to kindness and understanding despite the tumult of the world around them.

Madeleine Freeman, a senior at Yale University and the president of Queer and Indigenous at Yale, greeted the attendees in Choctaw before switching to English. She explained that she is writing her senior thesis on colonialism and the formation of Choctaw government after the American Civil War.

After growing up in Oklahoma, she said she finds New England cold and much more sterile when it comes to the acknowledgement and celebration of Indigenous people.

“It does sometimes feel like I’m in a graveyard,” she said. “There’s a lot of genocide that has happened. There’s people who don’t know that Native Americans are people, or that they’re still alive. People have asked me if I ride a buffalo, and I have a car.”

“Having events like this and meeting people here in New Haven that are Indigenous, who are proud to be Indigenous, who are willing to come stand in the cold in the middle October—it really does warm my heart,” she added. “I think this is what a lot of Indigeneity is about. Even in less than favorable circumstances, that we can come together and take part in community.” 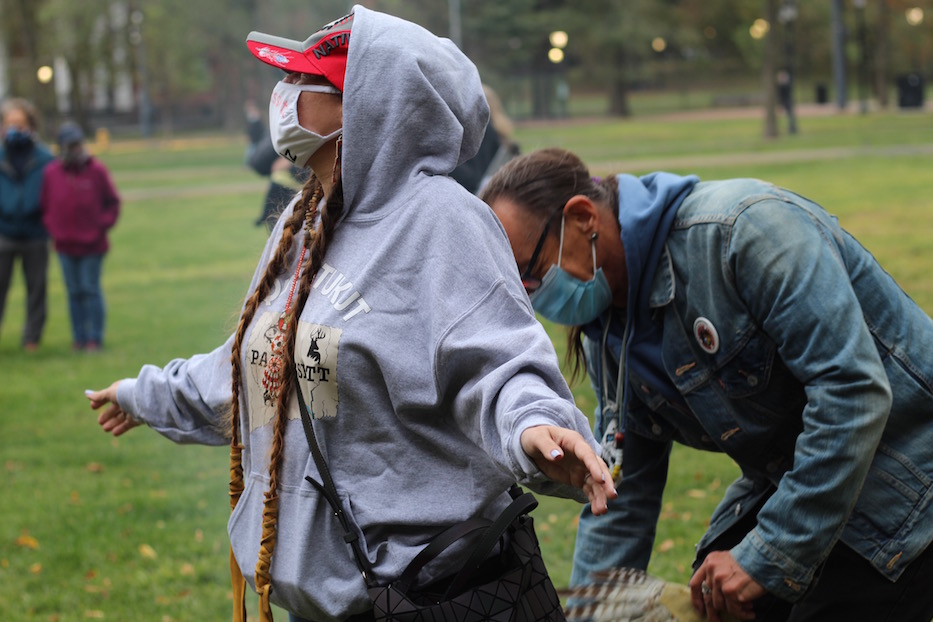 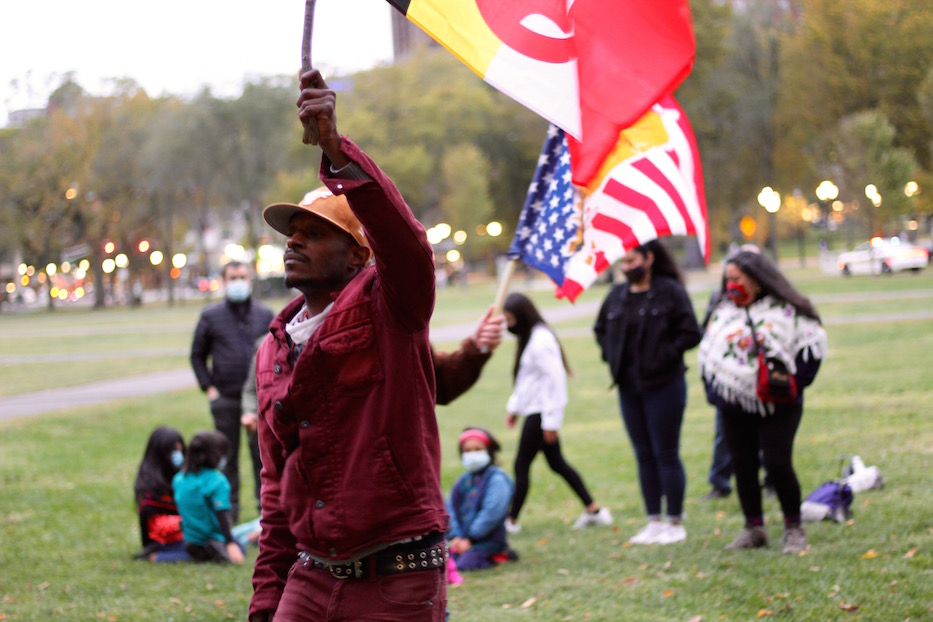 Golden Hill Paugussett Clan Mother Shoran Piper drove from the Trumbull Reservation where she lives with her family for the event. The daughter of the late Aurelius Piper, or Chief Big Eagle, she was raised listening to her father speak about the tribe’s history and legacy. In addition to the Trumbull site, there is a second, larger reservation in Colchester, Conn.

“Every day is Indigenous Peoples’ Day,” she said. “Never forget who you are and where you came from, and always walk in pride.”

Song, drum, and dancing threaded themselves through the event, with over 30 minutes dedicated entirely to music, movement and medicine. As attendees lifted their voices, the steady drumbeat connected them back to the land, a rhythmic and steady heartbeat. Clement opened the circle to anyone who wanted to speak before returning to one of the pillars on which he’d built this year’s ceremony.

In addition to a year that feels different because the statue of Columbus is gone, Clement ended the celebration where he began: with a reminder that the fight for recognition, for land reclamation, and for sovereignty continues. Vanesa Suárez, an activist and organizer in New Haven, called for justice for Lizzbeth Alemán-Popoca, an East Haven woman who disappeared from her home on July 1 of this year. 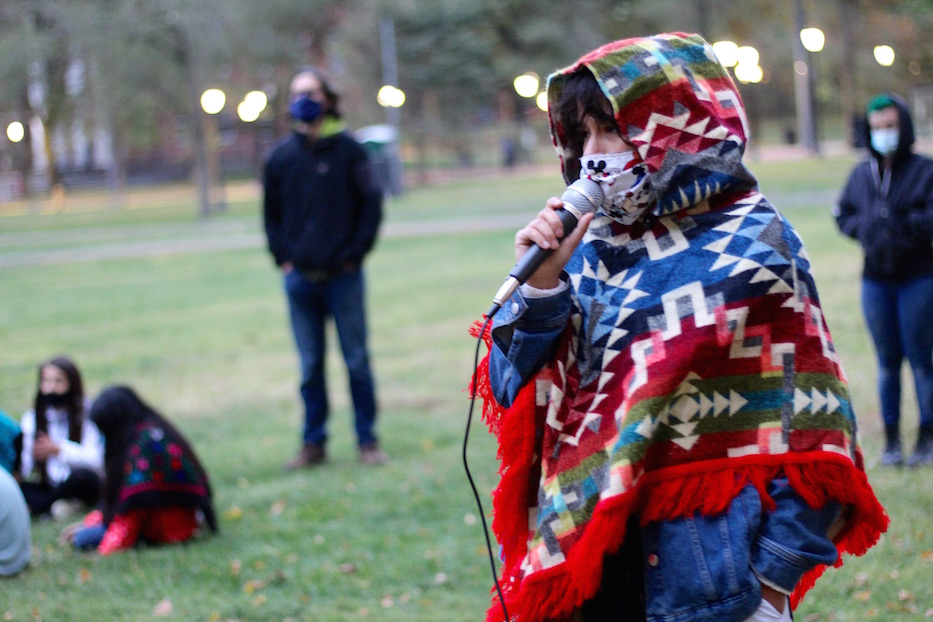 On July 16, she was found murdered in a shallow grave behind LoMonaco’s Ristorante in the neighboring town of Branford. Over 85 days later, no arrests have been made. Suárez said it speaks to a broader epidemic of aggression and violence that exists against women of color and particularly Indigenous women. That violence has spiked during COVID-19.

Suárez pointed out that had Alemán-Popoca been a white woman, news of her disappearance and murder would be everywhere. She suggested that elected officials, residents of East Haven and Branford, and members of law enforcement would be quicker to help. Instead, Alemán-Popoca was undocumented. Suárez called it a demonstrated lack of regard for her life, her daughter, her family and her future.

“We want our sisters to know that they’re not alone, and that it’s important to have these conversations and create this dialogue,” she said. “We’re fighting for Lizzbeth and for all of our sisters.”