That was the consensus during a panel discussion Saturday at Yale University’s sixth annual annual Food Systems Symposium. Titled “Urban Agriculture in New Haven: Limitations and Possibilities,” the panel was moderated by CitySeed Marketing Coordinator Frankie Douglass, with a full lineup of community speakers.

The panelists agreed that city gardening is about more than feeding people. Instead, it can be a means of connection, a remedy to some of the city’s food insecurity, and an antidote to gun violence. 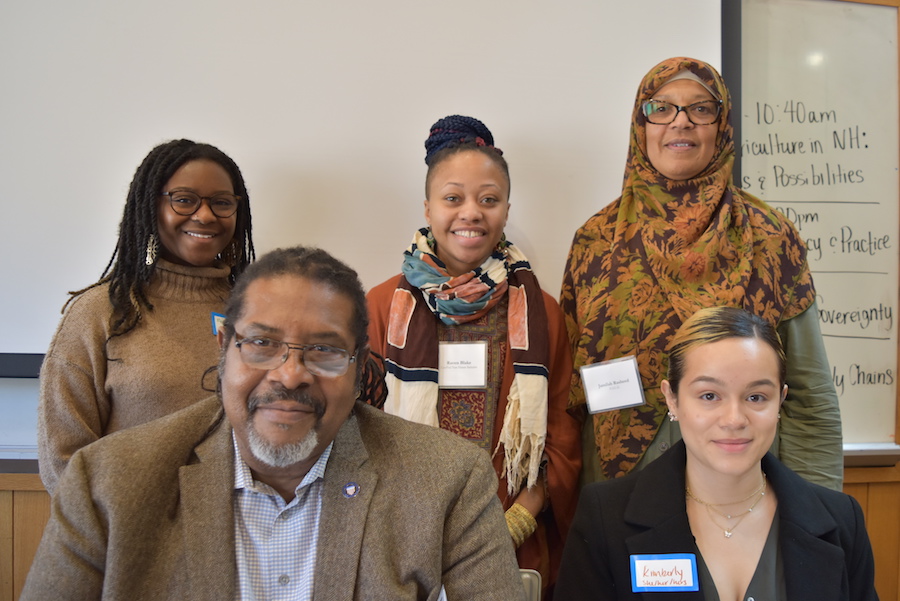 All four have spent time cultivating gardens in the city—Rasheed in the Hill neighborhood, Spell in West River, where he runs The Little Red Hen, Blake at the Armory, ConnCAT and around the city, and Acosta with New Haven Farms among others.

“Community gardening connects the people in the community together. It builds trust,” said Acosta.

Part of that trust is having gardeners who reflect the community. Blake said that when Love Fed was developing its garden at the Goffe Street Armory, “it made a difference to have black and brown organizers” doing the work. She saw that neighborhood residents were more likely to approach the space and consider on first glance that it might belong to them too.

She also honed in on urban agriculture as a path to job creation, where more people with an understanding of the land are being hired to do that work.

“More and more organizations are calling for people who have that knowledge to run these initiatives," she said. "Folks can get a certification and use it to get space in their community or city to grow food and educate and train other people.”

As a retired New Haven Police Department detective and the current director of Project Longevity, Spell said he has used urban agriculture to calm gang and gun violence in the city. He agreed with Blake, saying he’d like to see New Haven’s “street-corner entrepreneurs” turn from illegal to legal enterprises, like cultivating mushrooms or micro greens at home and selling the produce.

“When you toil in the soil, there’s something about that co-laboring that facilitates that bond,” he said.

"We would need acres and acres” of gardens to meet all of the community’s needs, he added.

Panelists also discussed the most conspicuous reason for urban gardens—New Haven’s high rate of food insecurity. Acosta, who has done work with New Haven Farms’ farm-based wellness program, noted that “urban agriculture has to go beyond feeding people and address the root causes that cause people to go hungry.”

She explained that CT-CORE is working to create new food systems, including issuing a food justice guide for resources to change those systems. The organization’s goal is helping people access the resources they need in order to feed themselves. 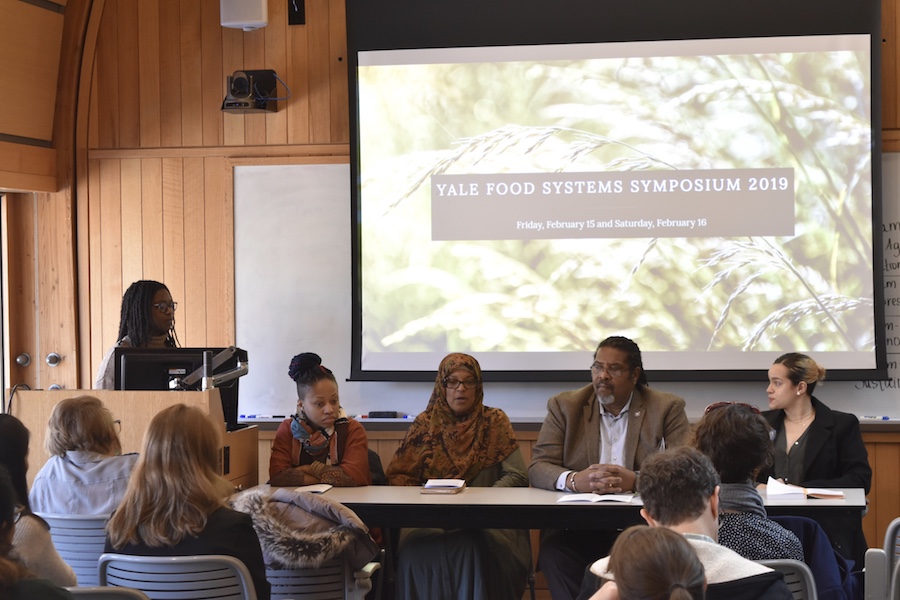 Panelists added that city gardens—and, more broadly speaking, green spaces—can also be avenues for both justice and injustice. Acosta noted that sometimes “beautification” can lead to “gentrification.” She argued that people need more community-run food systems, and she said that the key to making green spaces successful is cultivating community buy-in.

“If community members aren’t involved”—including representatives from a wide variety of groups within the neighborhood—“they won’t feel ownership of the space.”

“They greened my neighborhood, but it didn’t get rid of the ‘street-corner entrepreneurs,’” she added. “They hid drugs in the trees.”

For Rasheed, who started Field of Greens Community Garden in the Hill neighborhood of New Haven, the issue came back to her faith and the belief that a community can change itself from within.

“God is not going to change the condition of people until they change themselves,” she said.

In her neighborhood, 43 percent of the population lives below the poverty line. She called gardening “a means to change the condition of the community” and to “make this place they call home a viable place to live.” Like Blake, she said that growing food and flowers can improve the way people feel about the place they live, the people they live around, and even themselves.

“And that’s the way to justice,” she said.

Panelists noted that barriers exist at the most crucial step of the process of community farming: acquiring space. Blake noted the number of empty lots in New Haven—and the amount of red tape gardeners must go through before they are able to take over and cultivate the land.

Rasheed recalled that when she was applying for her space, New Haven’s City Plan Commission stood in her way, insisting that there were already enough green spaces in the city. She got help from the New Haven Land Trust and Livable City Initiative, but found that “you had to be consistent and make sure they heard you,” she said.

She added that that garden itself was a challenge. Even when she had secured the land, the soil was dry and tough, and contaminated with lead. She said it made her think of the people in her neighborhood that she tries to reach with the power of city gardening.

That’s an ongoing battle, she and other panelists added—much of New Haven’s soil is contaminated with lead, meaning that gardeners must build raised beds.

But with that space, they added, comes community-fueled momentum. Spell recalled that building the Little Red Hen helped community members feel that if they had taken ownership of one space, they could do it with other spaces too. He explained that his community’s approach has not been to wait on the city or state. Since the garden first began in 2012, it has attracted hundreds of community members to work alongside Spell, who distributes the bounty to folks in the community.