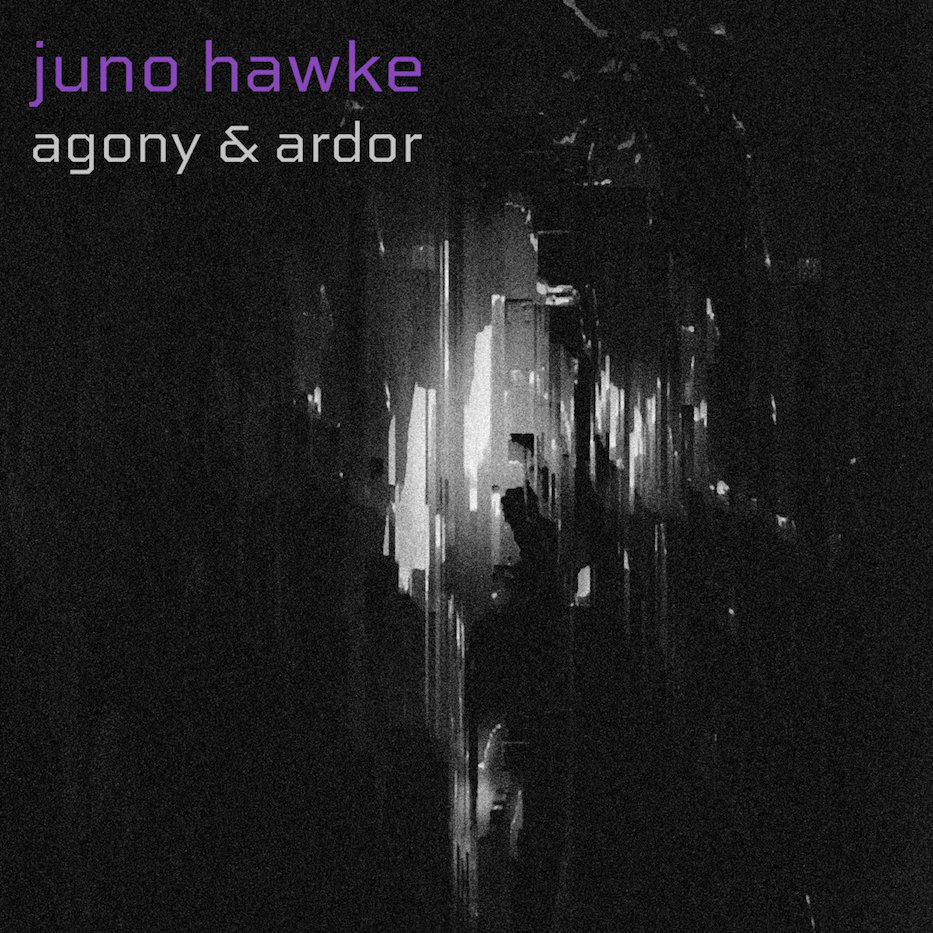 A bell—or maybe it’s a singing bowl—rings in the darkness. There’s another, as if the sound is chasing its tail. A muffled jingling joins in, like sleigh bells beneath the weight of several down comforters. Suddenly there’s synth, fuzzy at the outer edges. The whole thing starts to bubble and undulate.

maw is the first track on agony & ardor, the first full-length album from the musical project juno hawke. hawke—the all-lowercase moniker for New Haven musician Maia Leonardo—released the album earlier this month after working on it in quarantine. All proceeds go to the New Haven Pride Center, where Leonardo works as the marketing and development coordinator.

“I look at the album almost like a piece of glitch art,” Leonardo said in a phone call Thursday afternoon. “There are a lot of sounds that, like, I don’t really know where they came from. I don’t know how to reproduce them. But by focusing on the flaws or weaknesses in technology, you can create a very human work of art. And humans are very flawed pieces of technology.”

“I like to explore the cracks and see what’s down there,” she added.

From the outset, agony & ardor is more hypnotic than glitchy, the kind of sound worth playing through headphones and then through a speaker, just to catch the difference. On mal, hawke starts the piece off with high, nearly tinkling strings, as if the soundtrack to a horror film is somewhere up her sleeve. Synth comes in, nearly a match for a heart monitor. Something shifts: the sound gets lower, almost gritty. The space between beeps feels hard and dark, almost chilly to the touch.

Just as the listener thinks it’s one thing, hawke flips the script: a voice begins repeating the same few words, too muffled to make out (it is actually a recording from a numbers station). There’s a pushing, hard drum sound that comes from left field and disappears almost as quickly. The beat picks up. It sounds like a drag show underwater, with an old propeller plane running its engine taking off at the end.

Other tracks keep the listener guessing. In mood, it is almost as if hawke has left an opening, waiting for a 1970s metal band to walk out of the genre and straight onto the track. When no group makes an entrance, hawke layers in airy, bright video game sounds and succinct, crackly pops. In hunt, glitchy electronica meets synth-soaked keys, something shrill and brassy, and a didgeridoo-like rumble flowing into the foundation.

If this is a portrait of the artist experimenting and then experimenting again (hawke’s suggestion that “I make computers and analog synthesizers do the bleepity and the bloopity” is equally endearing and on point), there’s an arc that makes agony & ardor worth listening straight through. Just after its halfway point the album lifts, a sort of peace teasing at a track titled loss.

thorazine, which follows, catches itself somewhere between alien symphony and steel drum, the kind of all-encompassing-sound that pushes only forward. It makes sense that the final track, arise, is both the longest on the album and includes wordless lullaby and birdsong.

“It's about a constellation of things, including surreal dreams, living in a cyberpunk dystopia and the revolution that will liberate us all, and the bipolar experience,” Leonardo wrote in an email earlier this month.

This feels like quarantine listening: intimate enough to fill a home, but sprawling enough to remind a listener of the strange and interrupted world outside. Among nods to techno, electronica, and a sort of slo-mo club, there are meditative bells, birdsong, sirens, and footfalls—all field recordings taken in New Haven. They are aural postcards, telling the story of a city, its arrhythmic heartbeat, and a musician moving through it.

In December, the artist started making recordings during a snowstorm, as sirens pierced the wet night air for hours on end. There are footsteps and honking cars, from a time when going out on a lunch break was an unfussy thing to do. There are clicks and automated noises, from a 1 a.m. jaunt out to Waterfront Street to record machinery during quarantine. Listening in the midst of COVID-19 puts into relief a New Haven that is the same as it was four months ago, and not the same at all.

“This album is a number of things, but it is also a love letter to New Haven,” Leonardo said Thursday. “One of my themes was revolution and radical change and the hope of something better. The way the last track evolves into the birds, like it’s a new day in New Haven. We can change the world.”

“I think it’s become very apparent to a lot of people that there really isn’t a normal to get back to,” she added. “There are 40 million people slated to be evicted this month. A society can’t recover from that. We are on the brink of something really ugly happening … and I think COVID-19 is really exposing a lot of the structural and systemic inequities out there. It’s heartening to see people out in the streets, saying ‘this isn’t working.’”