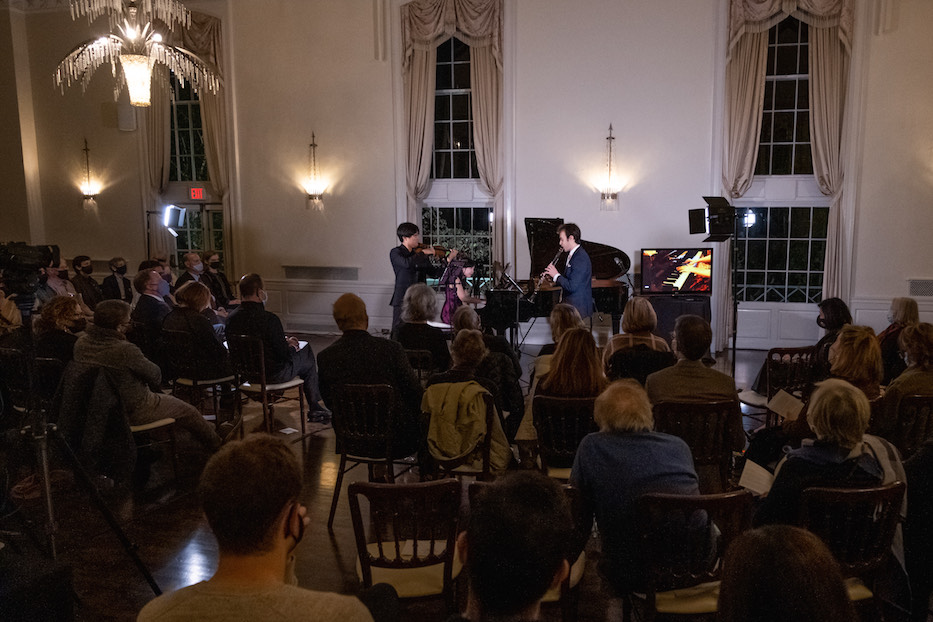 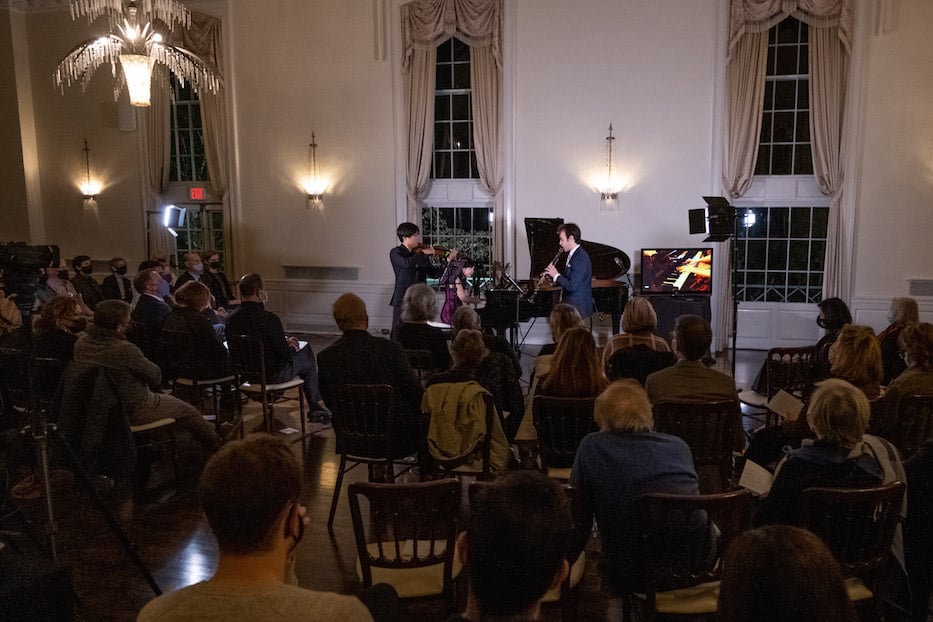 The clarinet warbled and wailed, summoning a far-away vision. In another universe, an American was sitting at a bar-tabac in Paris, staring into his glass of wine. Piano came in, silky-smooth, and he began to dream of home. The clarinet sang to the keys, and a wave of Merlot sloshed and crested in the glass. Back in New Haven, the audience was all ears.

It marked the first of three concerts Kallos will perform as musicians in residence at the Lawn Club, located in the East Rock neighborhood of New Haven. Kallos only recently returned to in-person performance after a season of virtual shows.

The group kept a livestream for those watching at home; more information about its season is available here.

Minyoung Kang, who founded the series in early 2019, said she came up with the idea for a concert anchored in story while reading books to her young daughter, who is now two and a half years old. Instead of children’s books, Kang built Wednesday’s program around narrative music.

“I realized music can tell us stories in more intuitive and compassionate ways,” she said Wednesday. “I really hope to broaden the horizon of musical storytelling tonight.”

As musicians entered the building’s long-quiet ballroom, the sense of storytelling rippled through the rows of chairs, filling the space with light even as darkness closed in outside. Standing on a floor-turned-stage, clarinetist Graeme Steele Johnson opened a door to another world, and invited members of the audience to walk through it with him.

With a smile teasing at the edges of his mouth, he described how Gershwin imagined the “Blues” section of An American In Paris as “an alcohol-induced bout of homesickness” that the titular American experienced after having a little too much to drink. The anecdote got a round of pre-concert laughter: many attendees cradled half-empty glasses of red and white wine that they sipped in covert, short mask breaks. After 18 months of limited travel, the idea of homesickness seemed as foreign and farfetched as a trip to France itself.

“It’s really amazing to see a full hall after so long,” Johnson said, and the audience murmured in agreement.

Johnson raised the instrument to his lips, and fixed his eyes on Kang for just a moment. As the clarinet climbed, a listener could see a young Gershwin sitting at a bar, suddenly feeling far away from home. Kang responded with a rush of keys, and the two were suddenly in conversation, chatting about what it meant to leave one land, and come to another as a temporary, adoring interloper. Outside the room, a wintry wind melted away, replaced by a beeping and bustling Avenue de la Grande Armée. The instruments mimed the squeal of passing traffic.

France was just one theme during the evening. That sense of story threaded itself through Tōru Takemitsu's 1951 Distance de Fée (Fairy's Distance), named after an eponymous work by the poet Shuzo Takiguchi. By then, Takemitsu was just 21 years old and had already lived the life of a young soldier, conscripted for military service when he was just 14 years. It was 1944, and Japan was in the final throes of World War Two. Music became his unlikely safe haven, and later led him to the work of French composers Claude Debussy and Olivier Messiaen.

"Can you imagine what he went through as a child soldier?" Kang said. "It's just heartbreaking."

And yet the work did not entirely give in to the darkness of Takemitsu's teenage years. It felt gentle and spacious, as if the composer was channeling the land coming alive after a long, soaking and unsettling rain. As violinist Siwoo Kim drew his violin to his chin, a stillness came over the room. Kang played him in softly, and a lush carpet of sound appeared beneath his feet. He loosed a short, initial cry from the violin, followed by a melody that chased itself around, never running in a perfect circle.

Beneath the room's heavy chandeliers, Kim made the instrument sing, its sound so full that it sometimes seemed as though two violins must have been there. He leaned in, and the strings undulated as if they were hooked up to a synthesizer. In under eight minutes, he had pulled the audience to a far-away place, and then brought them back to the room.

Kang also built humor and wit into the program. In Francis Poulenc's L'invitation au château, written to score Jean Anouilh's satire of the same name, musicians leaned all the way into the sheer delight of the work. With short, pregnant silences, sped up and slowed down sections, and a pause that allowed for a tuning break, they tapped into Poulenc's sense of whimsy—that of a composer who has mastered the craft sufficiently enough to poke fun at it too.

They sailed through the piece in a language of succinct nods and glances, sometimes close to giggling. At one point, Kim began tuning the instrument—part of the work—and the audience burst into laughter. As piano and clarinet began to flirt with each other, it was easy to imagine two young, perhaps stupefied lovers on a stage, volleying compliments back and forth until they weren't sure who had spoken last.

In between works, the concert also told the story of a city coming cautiously back to life. When musicians played, they put their entire bodies into it. Eyelids fluttered. Feet rocked back and forth on the ground, sometimes becoming a gentle part of the soundtrack. At Poulenc's L'invitation, Kang's back arched and swayed, graceful as it cut through the air. The sound filled the room all the way up, winding to its high ceilings and pressing against the cold, large back windows. There wasn't a screen in sight, save the livestream set up at the back of the room.

Gathered around them, listeners seemed ready to be back. Masked laughter, louder and more frequent as the night wore on, rippled through the room. Bursts of spontaneous, cheering applause exploded in between movements on purpose. Gershwin and Poulenc were greeted like old friends; Stravinsky got a standing ovation from which only confetti cannons seemed to be missing. By the final work of the night, an audience member asked if the musicians needed dancers to jump into Stravinsky's 1918 Histoire du Soldat. It felt like she was only half joking.

It was fitting, then, when the group ended the night on a story of good versus evil, music versus silence, full-heartedness versus an existential kind of running on empty. Before beginning, Johnson explained that the work’s fullest version is performed with singers, dancers, and six musicians. The pared-down version, it turned out, was plenty robust for the room.

In Histoire du Soldat, a soldier meets the Devil, and trades his violin for a prophetic book. As the first movement picked up, listeners could hear the soldier’s brisk march, his footfalls captured in bursts of piano and clarinet. Here were his boots on the ground, trundling along. And here was the Devil, envious as he eyes the soldier’s prized violin from afar. Strings flew through a second movement and onto the third, an exchange between the two.

By the time a tango bubbled into the Devil’s final dance, a few members of the audience were bopping their heads, shaking their shoulders, and lifting their hands and mock-conducting.

Piano became frantic, keys rushing to get to some place that they’d been before. Clarinet and strings stretched and climbed over it, determined to keep up. Clarinet shrieked and wove toward the ceiling. Kang’s hands flew at the keys. As she played, strings became more insistent. They surged and roiled. And then just as quickly, they joined the clarinet in a final climax. The Devil’s spell was broken as Kang beamed over the audience.

The ballroom materialized again. Dozens of people rose to their feet, and filled it with echoing, raucous applause. Then as if there was still magic afoot, they disappeared into the night.