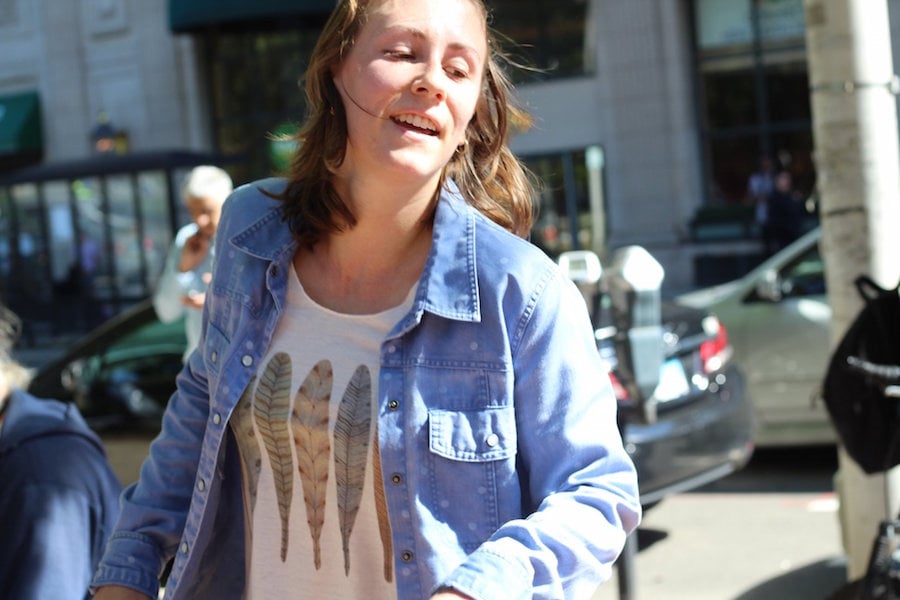 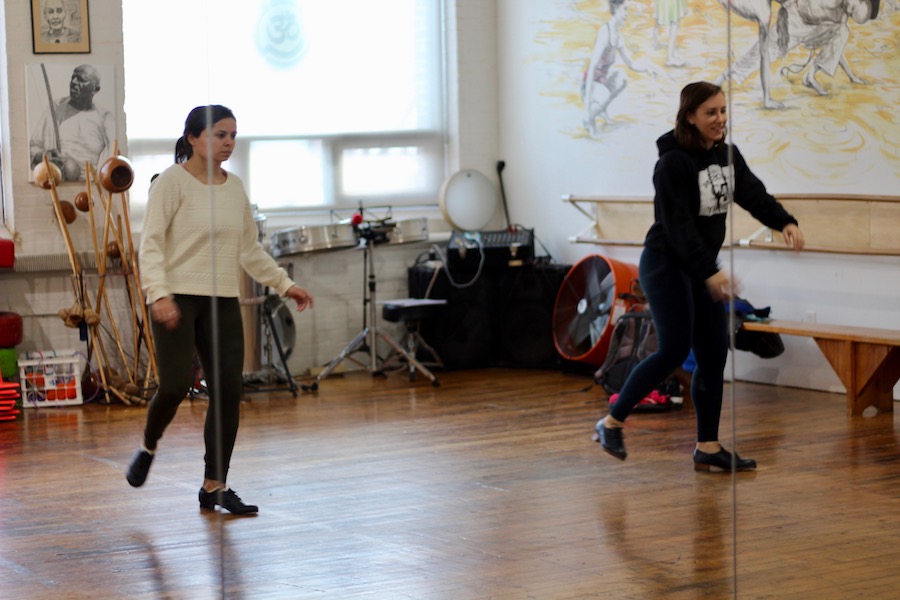 Alexis Robbins was getting ready to perform magic from the ankles down. She counted off from the back of the room, scurrying to the front after moving her playlist to the right song. Turkuaz’s “Nightswimming” blasted over the room. One funky riff in, she and student Juliana McBroom sprang into motion, feet clickety-clacking against the hard wood floor.

The founder and artistic director of kamrDANCE, Robbins is a relatively New Haven transplant, now teaching open tap dance classes from the Connecticut Capoeira & Dance Center in Erector Square. After moving to the city with her partner in August, she is trying to create a new landscape for rhythm tap in New Haven, hoping it will catch on.

Rhythm tap a type of dance that builds on the idea that one’s body is an instrument unto itself. Unlike the more commercial Broadway tap—think big, flashy jazz hands, grand gestures, and the Radio City Rockettes —rhythm is more physical and kinetic, bringing dancers into what Robbins called “a deeper place, literally.”

“I just want this to be a community thing, where anyone can come,” she said on a recent Saturday, cooling down after a class. “I’m interested in how people can make their bodies the most efficient pathways [for movement]. If tap is new to you, it’s thinking about your body as an instrument.”

Robbins grew up in Wakefield, Rhode Island, a village of a couple thousand nestled in South Kingstown. Enrolled in a dance studio “that had a lot of issues” from a young age, she found herself teaching dance by the time she was 13.

At home, rhythm was also seeping into her repertoire. When Robbins was still young, her dad was the percussionist in a local rock band called Mercy Velvet. Early on, he would sit her down in their kitchen or living room, and have her listen to music—a mix of the Beatles, Bruce Springsteen, Dave Matthews Band drummer Carter Beauford and others—helping her tease out instruments one by one.

“He’d be like, ‘okay, we’re gonna really listen,” she recalled. 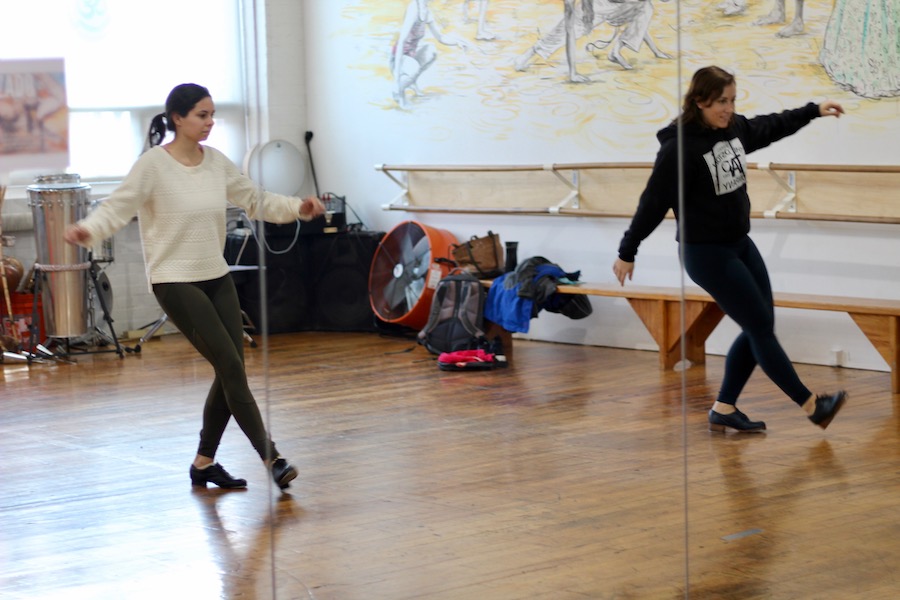 At her little dance school, teachers had started paying attention to the student who could master her classes, then turn around and choreograph routines for younger students. Because there was “basically zero tap” in the state, she began to branch out, taking classes at the famed Tap Kids Summer Intensive in New York City, and then joining the Boston Tap Company her senior year in high school.

Before she was even one Beantown Tapfest in, Robbins was hooked on the form, which she honed alongside her practice in modern dance. By the time she had finished high school, she had come to the realization that “I must make dances.”

After high school, Robbins headed to Hofstra University in Long Island, where she declared a dual degree in exercise science and dance. Working through semesters and summers to finish in four years, she watched her own technique grow, choreographing numbers with fellow students that tested the limits of what her body—and theirs— could do.

She recalled one dance, a routine titled “A Separate Connection” that paired rhythm tap and modern dance in the same piece. Her hope, she said, was to challenge modern dancers rhythmically, and tap dancers physically—while also showing the stunning commonalities between the two.

As two dancers took the stage, they mirrored each other in their respective forms, often showing how one movement translated to another type of dance. The project, which Robbins premiered at the American College Dance Festival, was the first alternate to represent the Northeast Region at the National College Dance Festival at the Kennedy Center in 2014.

By spring 2015, Robbins was halfway to forming her company, which fuses tap, percussive movement contemporary and modern dance. But when she graduated from Hofstra, immediately moving to New York City, she found that she had to cobble jobs together to make her artistry work. She took an adjunct professorship at Hofstra, where she still teaches today, and started teaching at studios around New York City and Long Island. 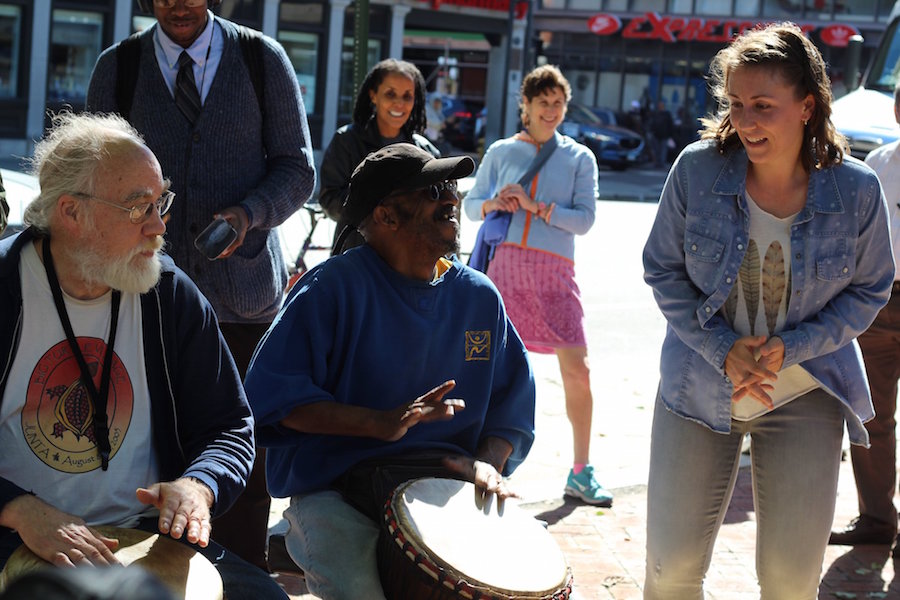 It wasn't a lot to get by on. But the dance made it exciting. While “I was applying to anything I could find”—Robbins ultimately found a job at the New York Health and Racquet Club that paid well and worked with her hours—she also started rolling out performances in the city, her classmates from Hofstra doubling as the fledgling members of an equally fledgling company.

As she expanded her performance circle across the city, she found that her favorite venues were the smallest, most intimate ones (“a lot of bars, a lot of strange places” she laughed during the interview), where the audience could see kamrDANCE company members breathe and sweat and land just so as they danced.

When she was back teaching in the studio, she made sure that her students knew where their dance steps were coming from, educating them in a tradition that has a rich but complicated history including minstrelsy, vaudeville, and jazz. She would—and still does—give mini-crash courses in steps, describing the person or people from which different movements first came.

“When we dance and when we’re moving, we’re able to be more creative and open-minded,” she said. “Tap is an American art form. Its roots are beautiful and its roots are sad.” 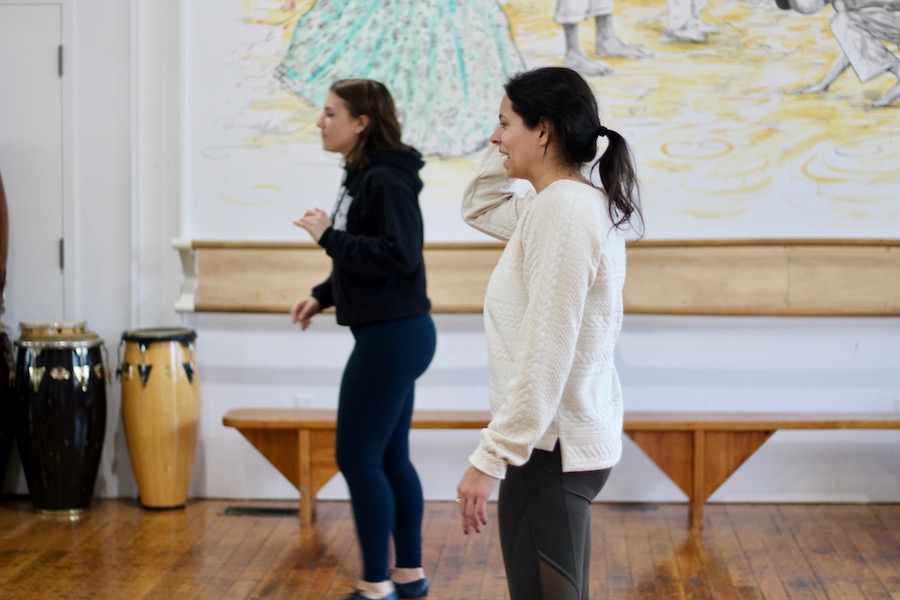 She also wanted to drive home the importance of rhythm tap, sometimes passed off as Broadway tap’s louder, more soulful and messy cousin. While both are physically rigorous, she stressed the former’s focus on weight transfer and the organic way a body is built to move, instead of the way it can look cosmetically pleasing. It’s the same reason she performs on a flat wooden board, which creates a clean, amplified sound when her feet come down.

But earlier this year, Robbins did make a sort of leap of her own. When her partner got a two-year postdoctoral fellowship at the the Yale Program on Climate Change Communication, the two moved to New Haven, arriving in August. While she still commutes into New York once a week or so—all of kamrDANCE’s other members are still living and practicing there—she said they have fallen hard for the city, taken by its own quirky and sweet rhythm.

Now, she’s working to expand how New Haven interacts with tap. During the week, Robbins works with Elm City Coach, where she has put her background in exercise science to use. In September, she also started to talk about teaching classes, an option she now gives every Saturday at Erector Square. As she put out her feelers on social media, old friends emerged from the woodwork,  hungry for tap instruction in Connecticut. Currently, she said, one student commutes weekly from Hartford for her classes.

Now, Robbins said she's also working on getting deeper into the community. In her own work, she's on what she called "this intense feminist kick of showing female experiences," testing the extent of her physical ability to test the very notion of her gender. She's been spreading that gospel through movement—October, she joined the Bregamos Healing Drums on the New Haven Green, participating in one of the first cultural pop-ups hosted by The Proprietors of the New Haven Green and the city’s Department of Parks, Recreation and Trees.

Reached Tuesday, Proprietor Kica Matos recalled how Robbins was one of the first to reply to an open call for artists, jamming with the drummers from the first moment they met.

“She and the Bregamos Drumming Circle came together on the Green—having never performed together—and engaged in an improvisational performance that was magical,” said Matos. “Scores of people stopped by to watch, and some even came and joined her while she danced.”

“The artistic beauty, energy and sense of community that she and the drumming circle created is something that we are hoping to re-create next year.”

Click on the embed above to watch a video of Robbins dancing. Alexis Robbins’ kamrDANCE open tap classes run Saturday Dec. 15 and 22, 10-11:30 a.m. at Erector Square’s Bldg. 3, 315 Peck St. Each class is $10. In January, she may be moving to a different location. For more information, email her at kamrdanceco@gmail.com. No shoes or experience required.