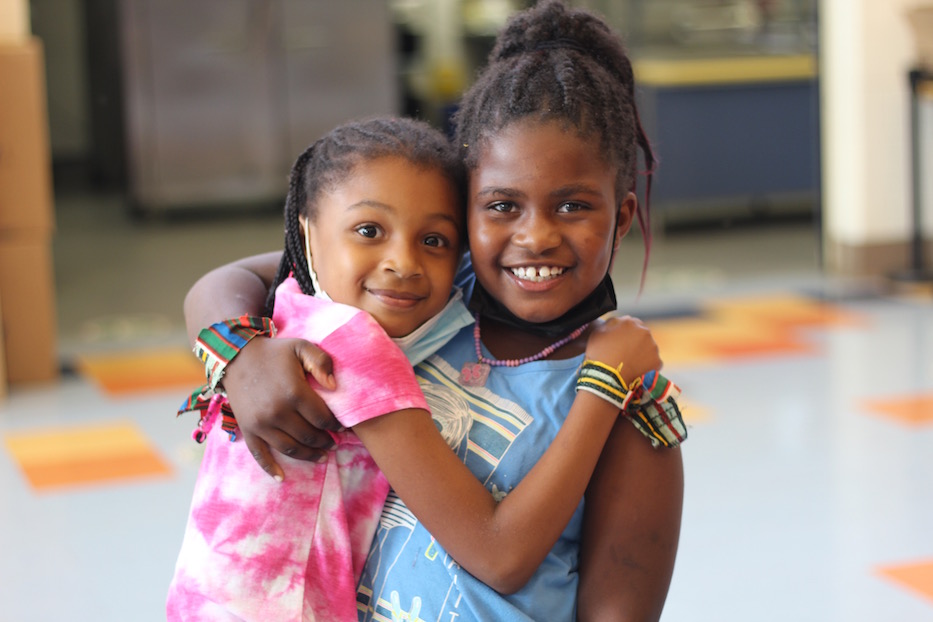 The drums echoed across the Blatchley Avenue gymnasium with a loud, crisp rhythm that got the audience clapping. Then just as quickly students were in Mexico, with photographs of sugar-dusted conchas and bright calaveras rendered in yellow and green. A berimbau and flurry of half-moon kicks transported them to Brazil. In between, they stopped in China, Japan, Russia, Canada, Ecuador, Colombia and Ethiopia.

Last week, dozens of students at Leadership, Education and Athletics in Partnership (LEAP) ended their summer session at Christopher Columbus Family Academy with a deep dive into a counselor-designed “international curriculum,” giving them a chance to travel the world without ever leaving New Haven. For weeks, students have spent time learning about other cultures through West African drum and dance, Brazilian capoeira, Fair Haven bakery excursions and nuances in salsa from Cuba to Colombia. It is supported in part by the  International Association of New Haven. 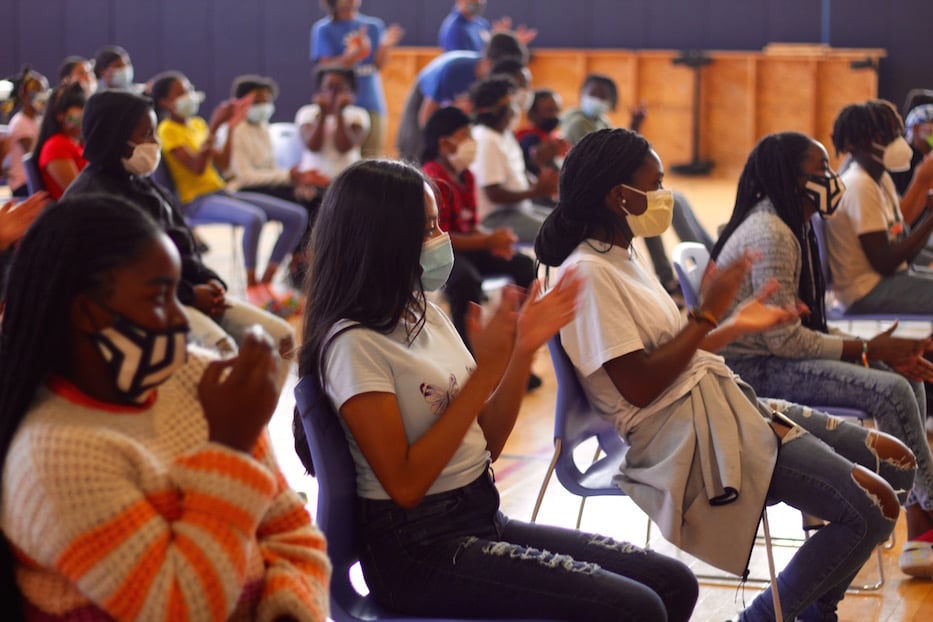 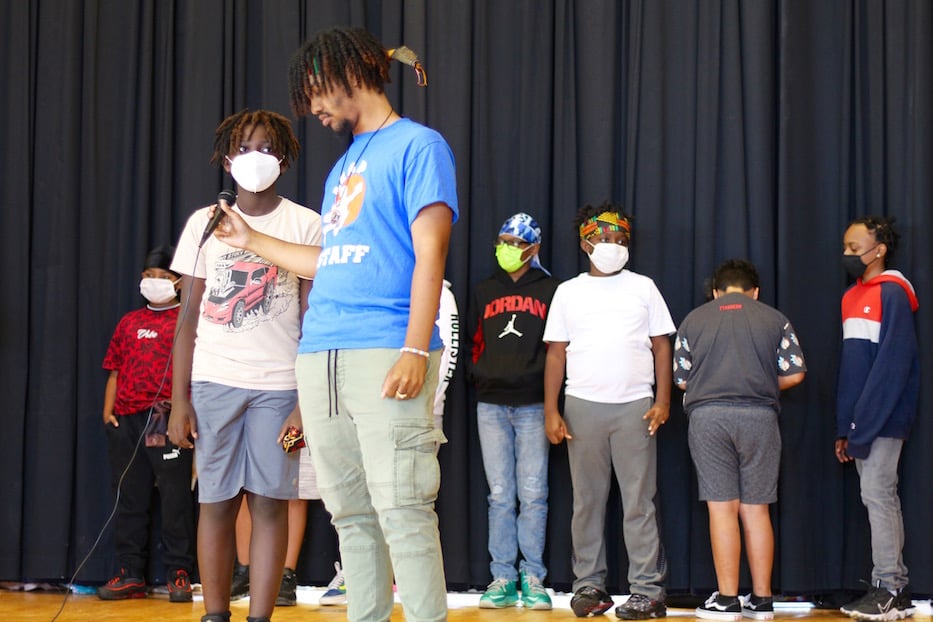 “It was very fun,” said Jahsai Johnson, a rising seventh grader at Celentano Biotech, Health and Medical Magnet School. “We learned about culture, and I feel more confident. They have very kind people at LEAP.”

LEAP’s 480 students are spread out across five sites, including Lincoln-Bassett School in Newhallville, Augusta Lewis Troup School in Dwight, Iglesia Betania in Fair Haven, Christopher Columbus Family Academy in Fair Haven, and Roberto Clemente School in the Hill. Thursday, the gymnasium at Columbus Academy became a joyful and cavernous cacophony, students showing off what they had learned as groups took the stage one by one.

When Mills invited students to the front, they filled the stage, each taking their place at a drum. Watching his hands carefully, they began to hammer out a string of phrases, each locking into the next. At one corner of the stage, counselor Darius Martin began to beat his handheld drum a little faster. The sound soared over the stage, singing alongside the other drums. Mills began to sing, and soon the audience was responding to his calls behind their masks.

In the back three rows, parents cheered LEAPers on, issuing a “Come on now!” and “Yes!” and “Okay!” every few minutes. 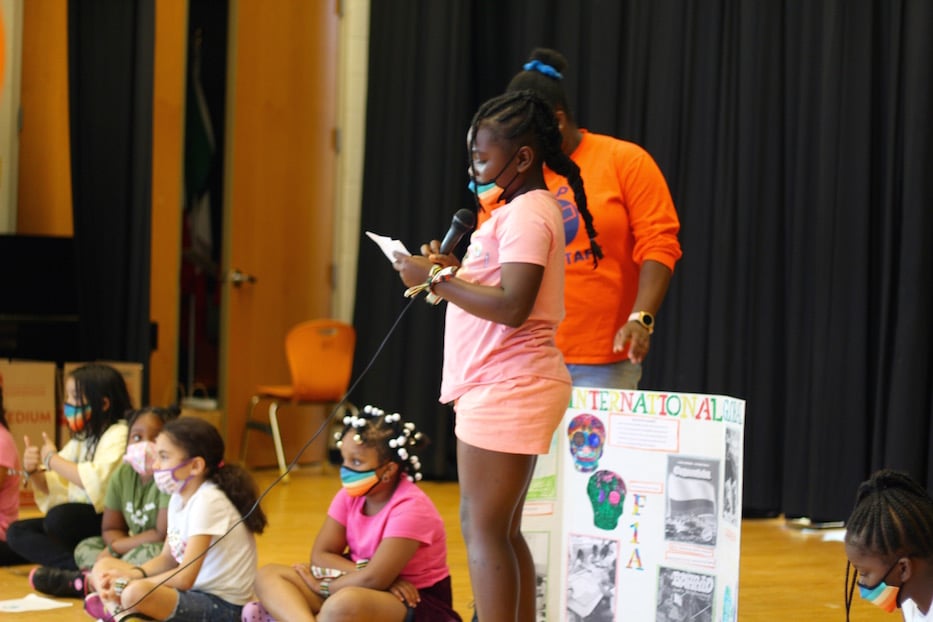 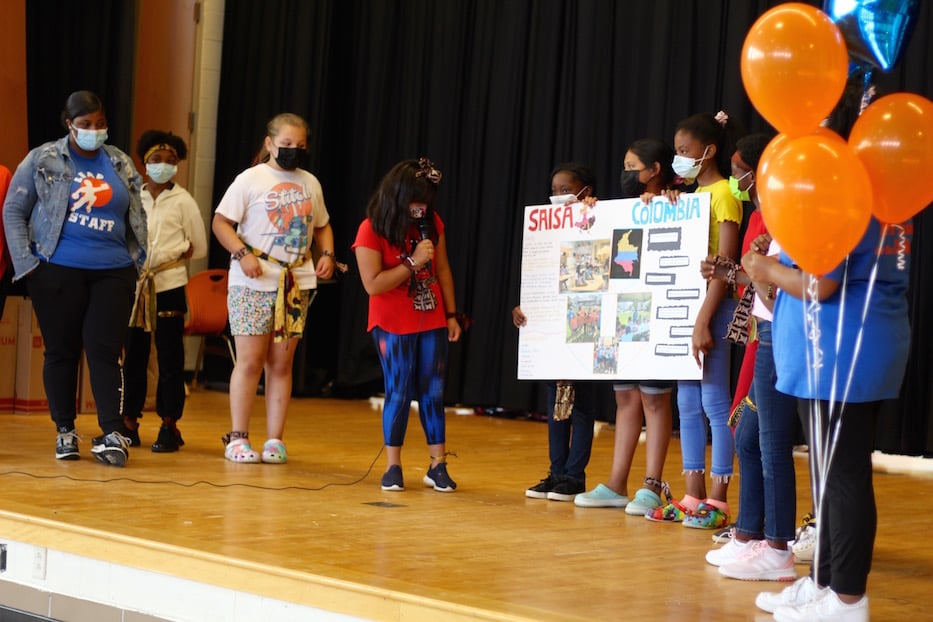 As if he had opened a valve, young LEAPers shared their new skill sets with glee, some high kicking and two-stepping through them as others pulled out posters and construction paper murals. Early in the presentation, dancer Earl Ali-Randall took the stage, moving through West African dance numbers with two classes of young girls behind him. When he stepped back, students began to improvise with crab walking, bobbing knees and pumping arms.

Taking the stage to cheers from fellow LEAPers, a group of fifth grade boys debated the meaning of community before dipping into a round of lightning-fast trivia on Japan. Erick Vargas, a rising fifth grader at Saint Martin de Porres Academy, later said that the activity made him curious to learn more about new countries around the world. Until he was five, he lived in the Dominican Republic. When he discovers new countries, it makes his world feel bigger than the Fair Haven neighborhood where his family is now based. 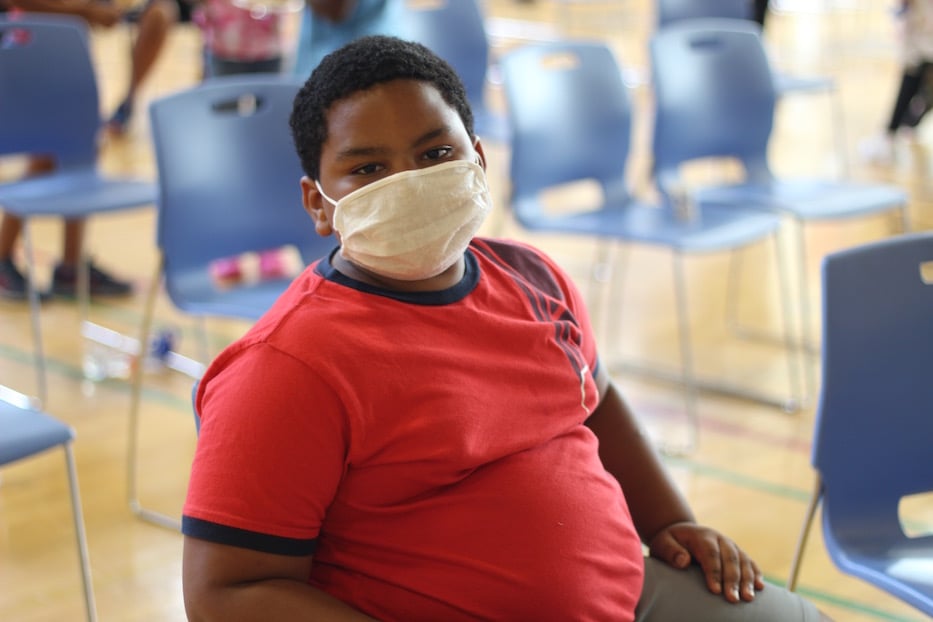 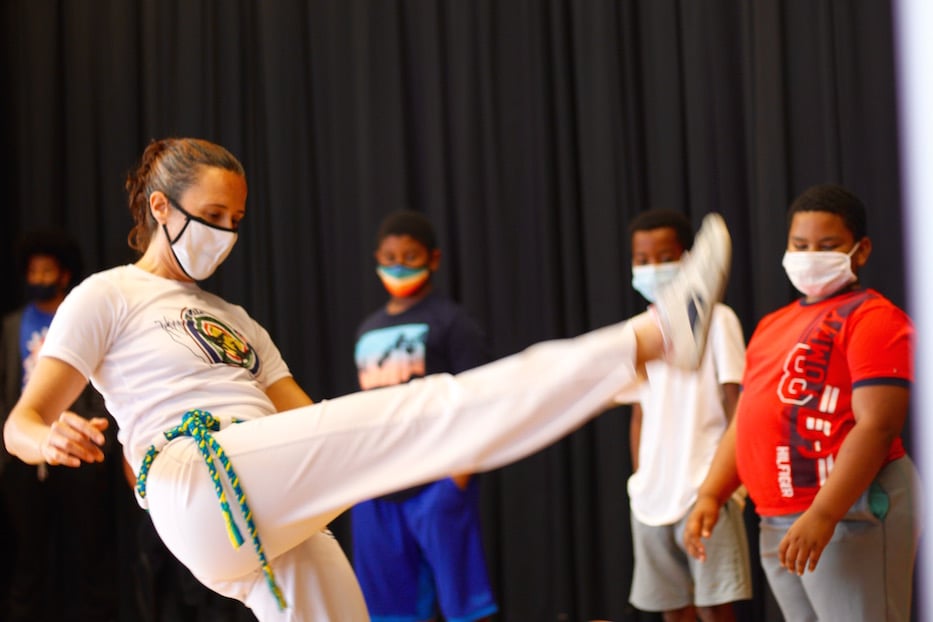 With Lisa Bergmann (Professora Fominha) of Capoeira Esperança, the same group cycled through Brazilian factoids and then introduced Capoeira to the audience. Leading them in a rendition of “Paranauê,” Bergmann explained that the song is about the emancipation of enslaved Africans who were brought to Brazil against their will. The clean refrain—Paranauê/Paranauê Paraná—became a mantra as it trickled from the stage through the young crowd. Even masked, students leaned forward and began to sing along.

As a classmate blew kisses from the stage, 7-year-old friends Neveaha Braggsellers and Skyy Merritt ran through factoids around Mexico, marvelling at the bright flag both onstage and off. Neveaha later said that she found it exciting to learn about a country so close to the U.S. that she hadn’t known much about before the session. 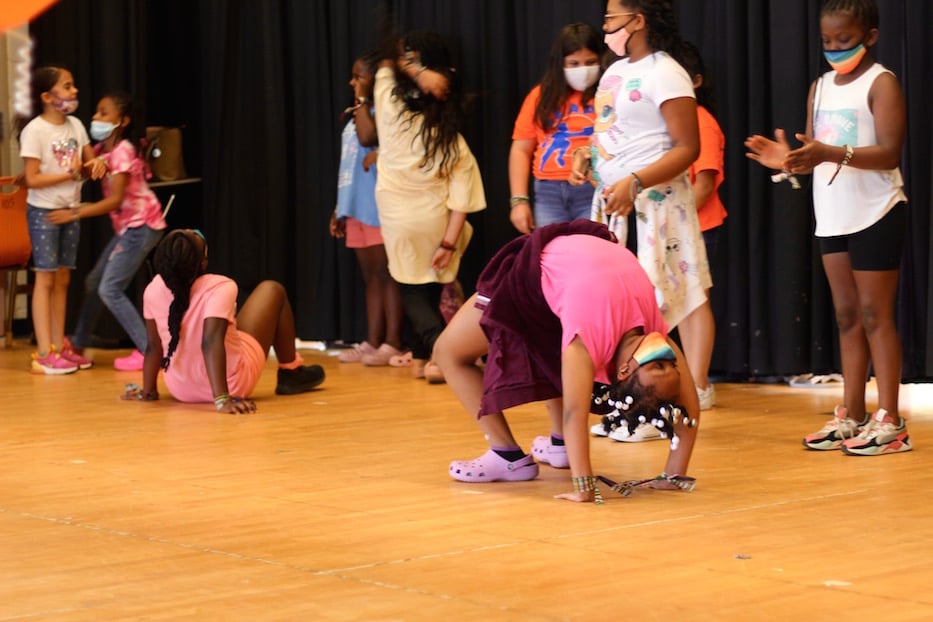 Some of LEAP’s counselors also brought literature, art, poetry and spoken word into their teaching. Seven and eight year old boys got the gym moving in unison to a chant about fried chicken wings. As if on cue, site director Yakeita Robinson bustled behind a long table, preparing plates of rice and peas and stuffed bread for students.

On stage, the presentations rolled safe. Presenting at the end of a long showcase, middle school girls celebrated not just Mexican culture—and the bakeries of Fair Haven through which they got to taste it—but the feminist legacies of Frida Khalo and Selena Quintanilla-Pérez. 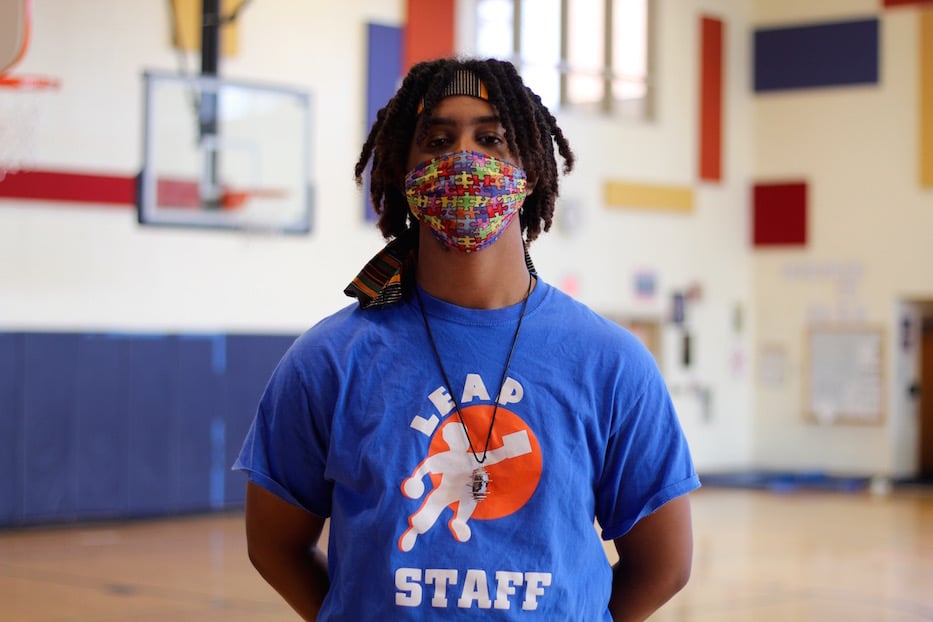 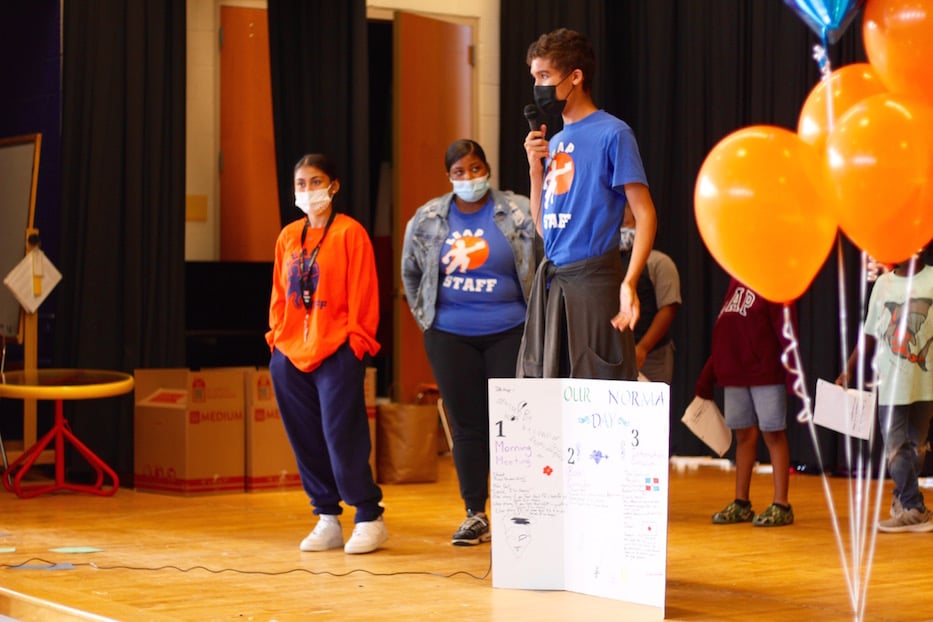 Martin, now a rising senior at Central Connecticut State University, had his group of middle school boys write acrostics using their names. The activity came to him early in the session, when he noticed that some of his students were bullying each other over the spellings and pronunciation of their names.

When he drummed with them in the classroom each week, Mills would tell them to be proud of their origin stories. Something clicked for Martin.

“We wanted them to take more confidence in their names and who they are,” Martin said. It worked. His student Miguel, for instance, became known as Magical, Intelligent, Gamer, Underappreciated, Excellent and Loyal.

For Martin, the poems are also personal: he started attending LEAP as a camper when he was 13. He stayed on to become a senior counselor for students who reminded him of his younger self. The kids remind him of who he was when he entered LEAP, and who he has become as a young adult who is finishing college.

His LEAPers “were a little shy” when the session started, he said. Now, they’re close with each other. That’s all he could ask for at the end of the day.

Find out more about LEAP at their website.  For more video from the event, check out the Arts Council's Instagram.