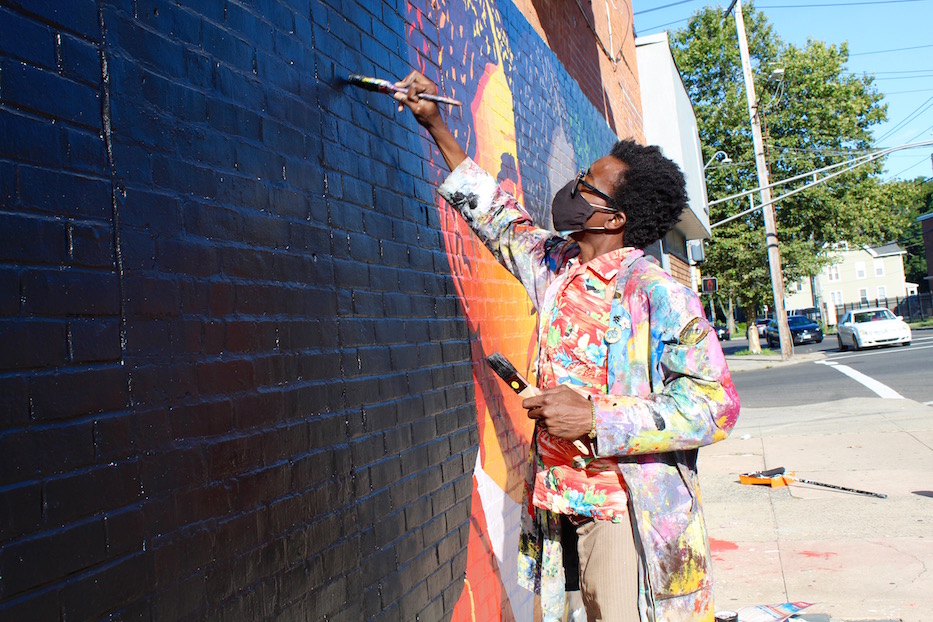 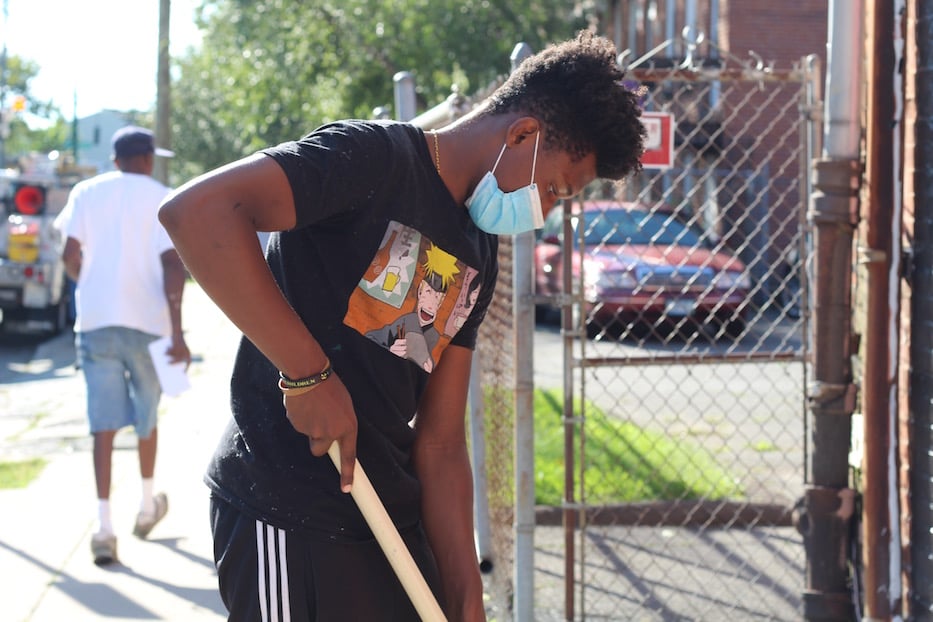 Shakir Muhammad, a senior at Wilbur Cross High School and a student at Squash Haven. He said he's been with the program for six or seven years. Lucy Gellman Photos.

Shakir Muhammad coated a roller in black paint and lifted it to a wall on Henry Street. In front of him, the nineteenth-century Black physicist Edward Alexander Bouchet looked back in wide-eyed technicolor. With every stroke, Muhammad committed to keeping his story alive.

Friday, Muhammad was one of several teens from Squash Haven to join artist Kwadwo Adae at the Henry Street mural, an explosion of color that celebrates Bouchet’s life, work, and legacy in New Haven. Painted on the side of Community Baptist Church, it revisits the history of one of the city’s forgotten pioneers, who made history as the first Black man in the United States to earn a Ph.D. when he graduated from Yale University in 1876.

At the time, Bouchet was one of only six people in the country to hold a doctorate in physics. The project, some version of which has been in the works since 2019, is funded by a $5,000 Cultural Vitality Grant from the city.  It joins Adae's nearby murals on Division Street and the Farmington Canal Heritage Trail. 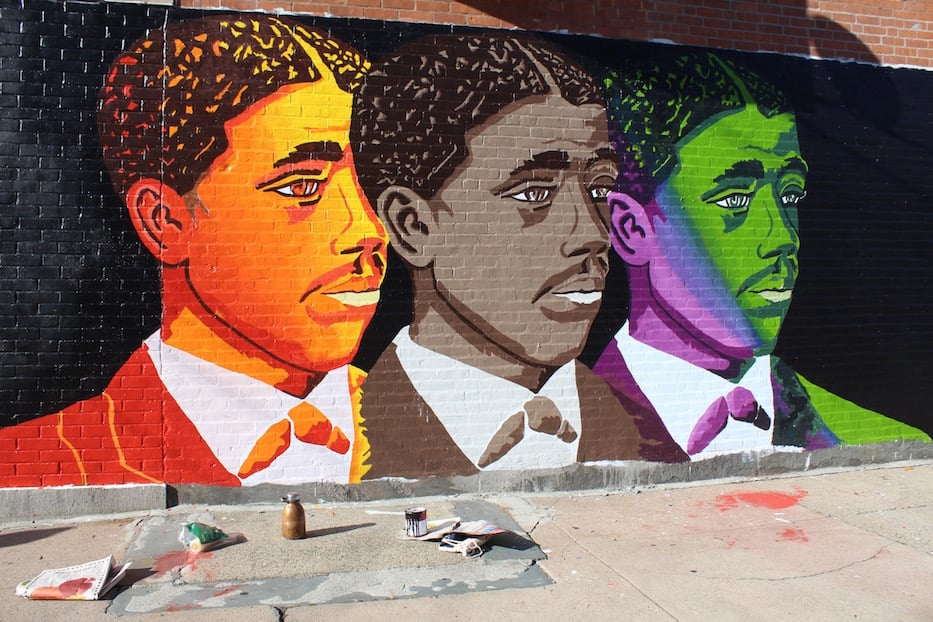 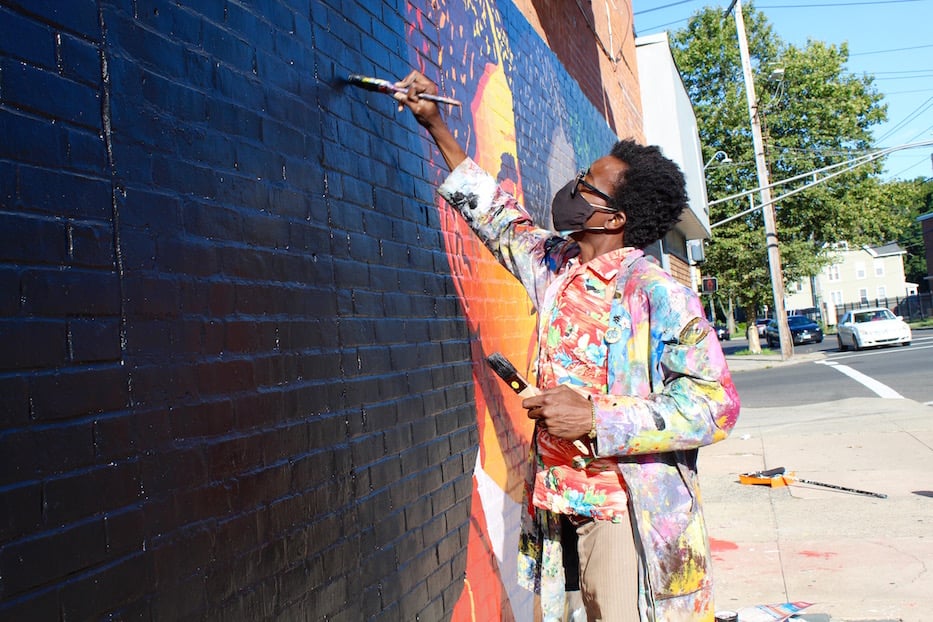 "The fact that New Haven has the first Black Ph.D. is, I feel like, something that everyone in this city should know," Adae said Friday afternoon, standing at the mural. "There should have already been a statue, or a monument, because that's a huge deal! Back in 1876! Historically, at that time, people still believed in eugenics."

It’s a New Haven history that is still unknown to many city residents, and not widely taught in its schools. Born and raised in New Haven—this Wednesday marks his 169th birthday—Bouchet nurtured a love for math and science from an early age, when he was a student at the Artisan Street Colored School in what is now Wooster Square. He went on to attend Hopkins School in the late 1860s, becoming the valedictorian of his class in 1870. He then studied physics at Yale, where he finished his Ph.D. in 1876.

After graduating from Yale, Bouchet moved to Philadelphia to teach at the Institute for Colored Youth. He returned to New Haven closer to the end of his life, and died in the city at the age of 66. He is buried in Evergreen Cemetery, where Adae has been going to visit and talk to him for over two years. While there are portraits honoring him at Yale and Hopkins, Adae said, the city doesn’t have so much as a street sign or plaque showing that he ever lived here.

"The ties that this man has to the city of New Haven and its academic institutions are so strong," Adae said. "He's part of the city, and part of Yale, and part of Hopkins—it's really someone that should be known by everyone. And an inspiration. He should be a hometown hero. And he's my hometown hero."

Friday, Adae buzzed around, setting Squash Haven students up with rollers, brushes, and trays of glimmering black paint as he ran through Bouchet’s timeline. He said he is particularly grateful to Troyé Jacobs, an administrator and senior pastoral assistant at Community Baptist Church, who gave him permission to use the wall after spotting Adae’s sparrows on Division Street. 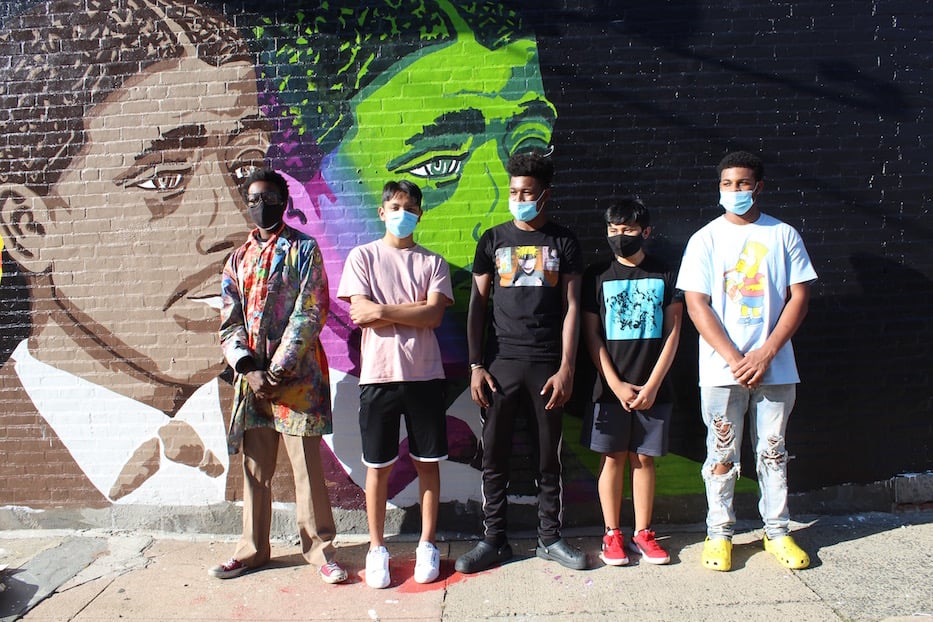 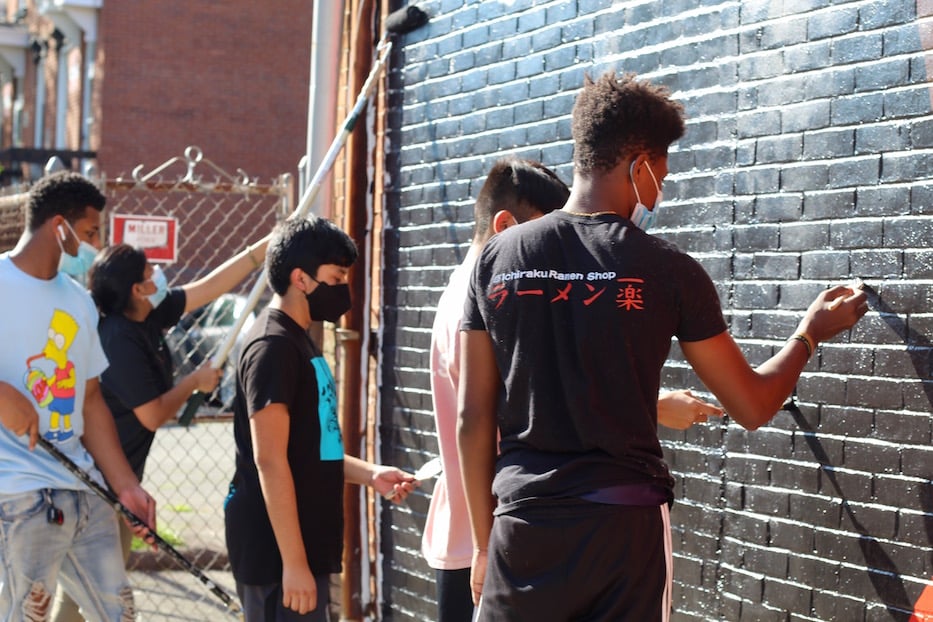 Lifting a brush to the wall, Wilbur Cross High School junior Gabriel Pérez-Estrada praised the mural as adding “a bit of life to this area.”

Before July, when Adae power-washed the spot and began painting, the church sported a nondescript wall in Pepto Bismol pink at the same spot. Now it’s a showstopper for neighbors, passers-by, and people hustling to catch the 238 bus nearby on Dixwell Avenue.

While he lives in Fair Haven Heights and attends school in the city, Pérez-Estrada said that it was the first time he can remember learning about Bouchet's work. The design itself is a nod to the physicist’s nineteenth-century research on measuring refractive indexes. Or as Adae put it in an earlier interview, “how light is broken up.”

“It adds quite a lot of history to this place,” Pérez-Estrada said.

A few feet away, Muhammad added another coat of paint to the lefthand corner of the wall. Now a senior at Wilbur Cross, he grew up not far from the mural on Newhall Street, close to the Hamden town line. While he has a faint memory of hearing Bouchet’s name in middle school, he said he was excited when Adae reminded him of the history. He likes having a brilliant Black man looking back at him every time he’s walking through the neighborhood. 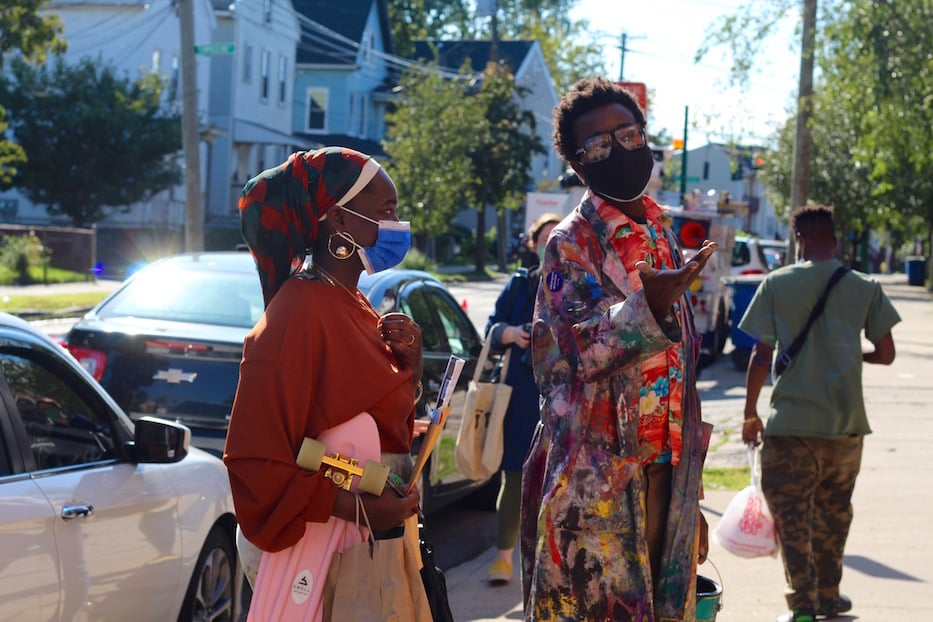 As he painted, his eyes darted from the black, silky sections of background to Bouchet’s face, beaming out over Dixwell Avenue with penetrating, larger-than-life eyes and pursed lips.

“That’s one of my people right there!” he said, adding that he finds the act of painting peaceful. “I feel proud.”

On the street, drivers honked their horns and stuck their heads into the warm afternoon air to get a closer look at the work. Cries of “I love it!” and “What’s this about?” and “Are you the artist?” filled the air every few minutes. Adae tried to answer each question, his voice musical as it rose above growling engines and groaning brakes. 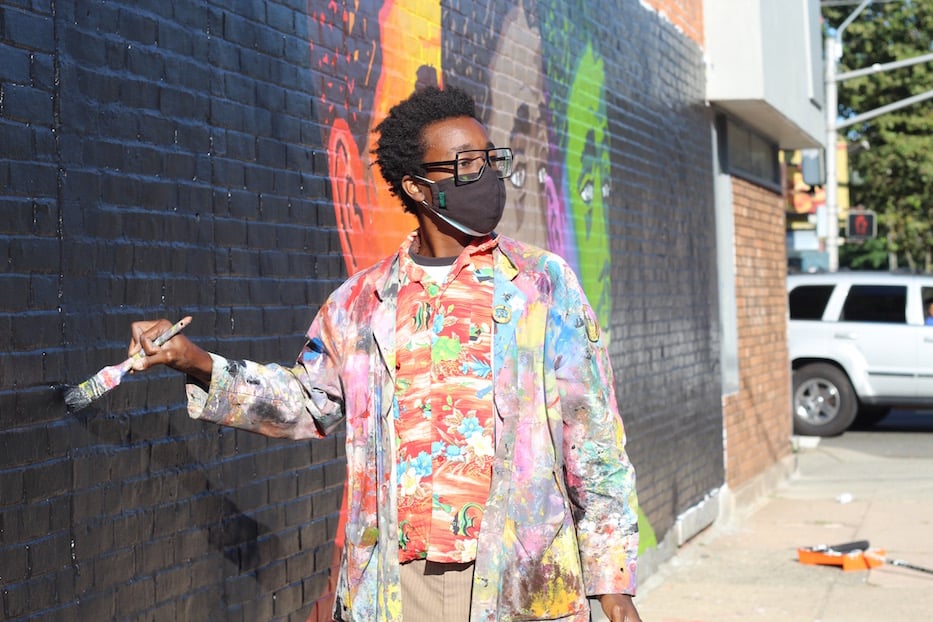 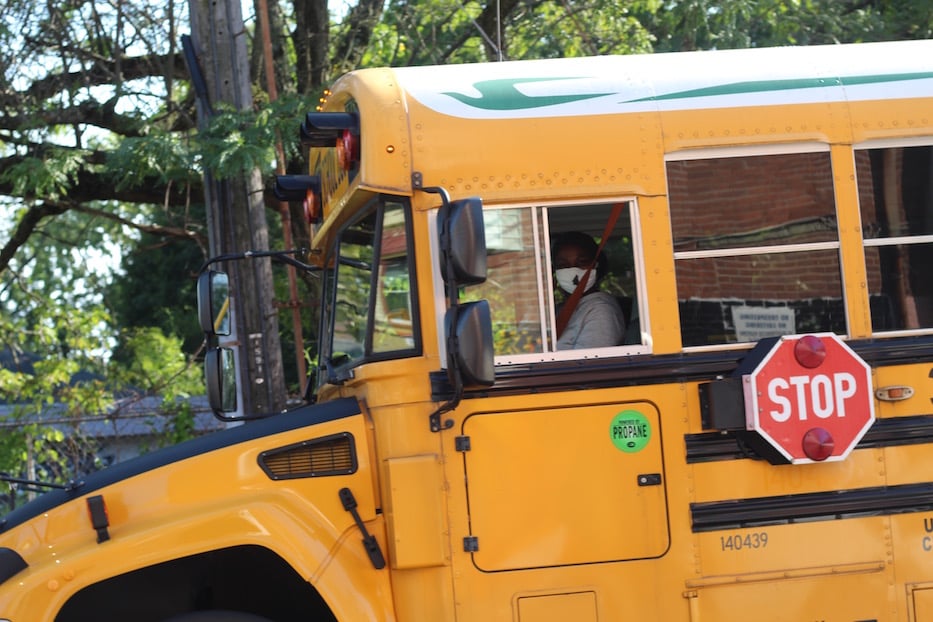 “This is beautiful! I love it!” is just a fraction of the praise and curiosity the mural has gotten.

A bus driver stopped at a red light, pumped her arm and cheered from the driver’s seat. “This is beautiful! I love it!” she said through the open window.

“Thank you!” Adae called back, his eyes crinkling at the edges in the shorthand for a double-masked smile.

Adae said it’s not uncommon for neighbors to stop by and watch him paint at all hours of the day; some jump in to help when there’s an extra brush around. Anthony Caver, who is currently living nearby, grabbed a brush to fill in a few thin spots at the bottom left of the image. He said that he hopes Adae puts a description of Bouchet’s work somewhere on or near the mural, so that city residents can learn about him as they are passing through the neighborhood.

On his way home from work, 24-year-old designer Rashawn McArthur slowed down to study the mural, and stayed for an impromptu history lesson from Adae. Growing up in New Haven, he said, he never learned about Bouchet’s impact on the city, or on the wider academic world. 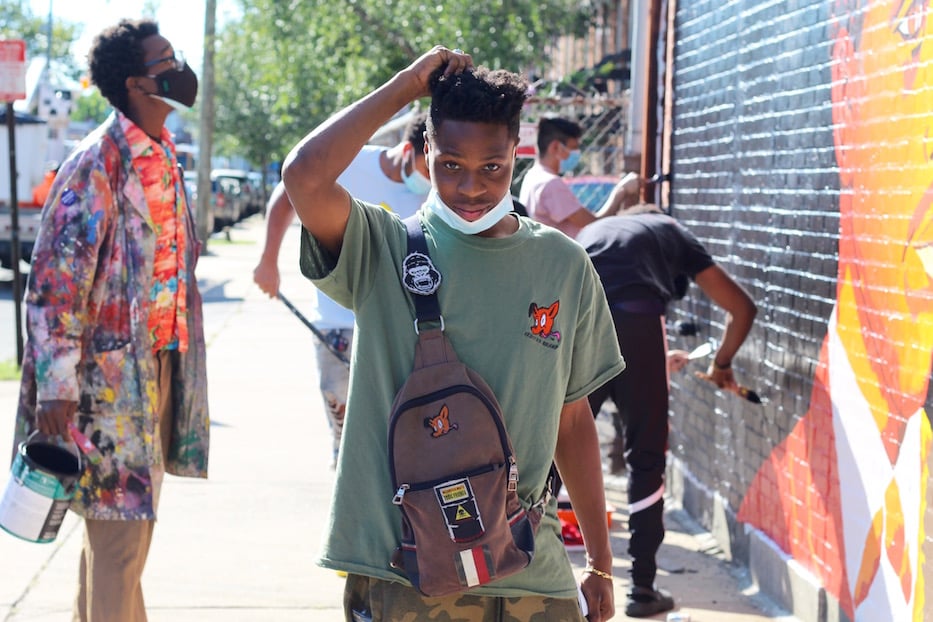 Rashawn McArthur: “That’s actually amazing that he was from New Haven.”

He loves that he can now pull it out of his back pocket, along with other New Haven trivia about Yale, Skull and Bones, and the New Haven Freemasons, to which his family members belonged. As if on cue, Black Haven Film Festival Creative Director Salwa Abdussabur walked by and handed him a flyer for the festival, tying past to present.

“That’s actually amazing that he was from New Haven,” McArthur said. “I love my city. The history that we have is so deep.”

When Adae speaks about Bouchet, the physicist’s story electrifies his body. He plants his feet solidly in the ground and stretches out his arms to point out details. He will jog over to neighbors to fill them in on the history, and then spend hours alone with Bouchet, ruminating on his legacy.

One Henry Street neighbor, who asked to remain anonymous, said she walks by the mural every day, and brings friends and family members to see it when they stop by her place. Friday, she praised Adae for working daily, sometimes in boiling summer heat, to add “history in the making” to a corner in her neighborhood.