Multicultural Festival RISEs To The Challenge 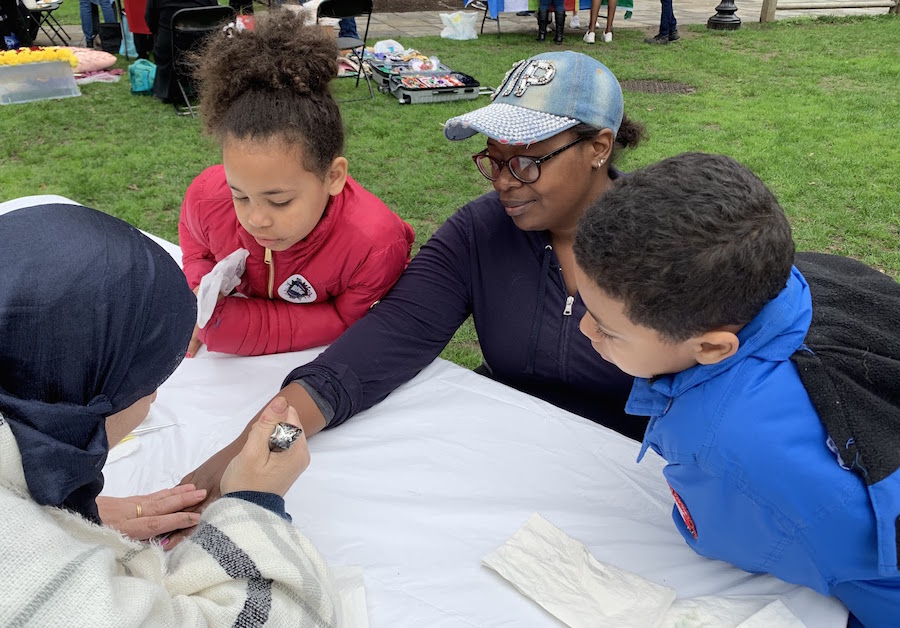 Jessica Newkirk stretched out her right arm and opened her fingers. Across the table, an immigrant mom looked back, her eyes smiling beneath a blue head scarf. She lifted her henna instruments and began to paint in careful, deliberate strokes. A flower with climbing vines took shape on Newkirk’s skin, her kids crowding in to get a closer look.

A senior administrative assistant at the Yale School of Medicine, Newkirk was one of over 50 Yalies and New Haveners to attend the second annual Refugee and Immigrant Student Education (RISE) Multicultural Festival on Sunday afternoon on Yale University’s old campus.

The event was cosponsored by Yale’s Office of International Students & Scholars (OISS), the Asian American Cultural Center and Dwight Hall, with additional participation from the Yale African Students Association, Students for Yemen, La Casa Cultural and others. After a burst of rain halfway through, the festival moved inside and kept going.

RISE—first founded as Students of Salaam (SOS) in 2016—is an organization based within Yale that arranges tutoring sessions between Yale students and immigrant and refugee youth in New Haven. This year, its multicultural festival featured henna, spoken word poetry, Bhangra, refugee artisans, and several immigrant and refugee chefs.

The festival also featured performances from New Haven and Hamden high school students, and participation from Integrated Refugee and Immigrant Services (IRIS) and its Sanctuary Kitchen program. In the spirit of the day's collaboration, there was also an e-blast that went out to resettled families and IRIS’ volunteer “cultural companions.”

“Our multicultural festival hopes to show the diversity of New Haven, especially the refugee and immigrant community,” said RISE Co-President Abdah Adam, a sophomore at Yale and one of the festival’s organizers. “We wanted to display the many cultures that New Haven represents through food, dance and spoken word poetry. Our events in general hope to connect the Yale community with the greater New Haven community.”

"Overall, there was a really festive and welcoming atmosphere," added RISE Co-President Meera Rothman, who lead the event with Adam.

Sunday, that connection spread across the campus. When Newkirk walked into the event, one of the first things she saw was a bright cluster of Bhangra dancers from Yale’s Bhangra troupe. As they took the makeshift dance floor—four dancing at one time, with two dancers waiting behind them—they wore traditional Punjabi dresses in many colors such as pink, green, blue, purple, and yellow. They danced for 10 minutes straight, rotating dancers while Indian music fused with modern pop. 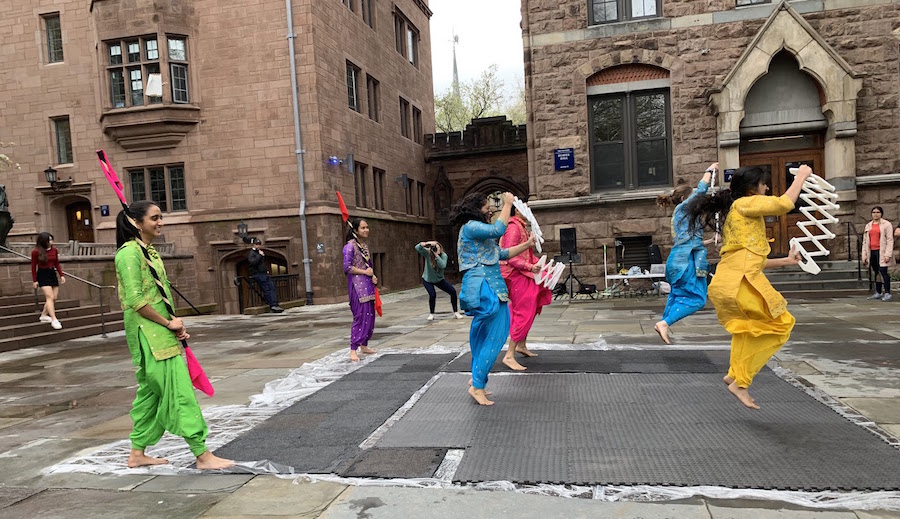 Newkirk tried out different foods as she walked around. She stopped at a table with food made by Chef Homa, an Afghani chef who IRIS helped resettle in New Haven three years ago. She sampled mantu, a meat stuffed dumpling that is popular in Afghanistan. RISE also included food from local immigrant-owned restaurants including Lalibela and Jeera Thai among others.

Afterwards, she moved along to a table where Turkish immigrants sold their fabrics and designs. “It is what I do best, I have no other job, I spend my whole day making it,” said one of the artisans, when later asked what keeps them working and inspired each day.

Newkirk ended her afternoon with henna, her kids Amelia and Branko looking on intently. As the artist drew out a pattern, she learned about the symbolism of the design—that leaves and vines around the flower symbolize devotion and vitality, and the longer the henna lasts, the longer she will stay married. She joked that she has always wanted to try henna, and hopes that she can keep herself from meddling with it.

“I will continue to take my children to these events,” she added as she prepared to head out. “I think it’s not just important that we have quality time, but you know, they meet new people and experience different cultures.”

This piece comes to the Arts Paper through the second annual Youth Arts Journalism Initiative (YAJI), a program of the Arts Council of Greater New Haven and the New Haven Free Public Library. Over eight weeks this spring, nine New Haven Public School students will be working with Arts Paper Editor Lucy Gellman and YAJI Program Assistant Melanie Espinal to produce four articles, for which they are compensated. Read more about the program here.