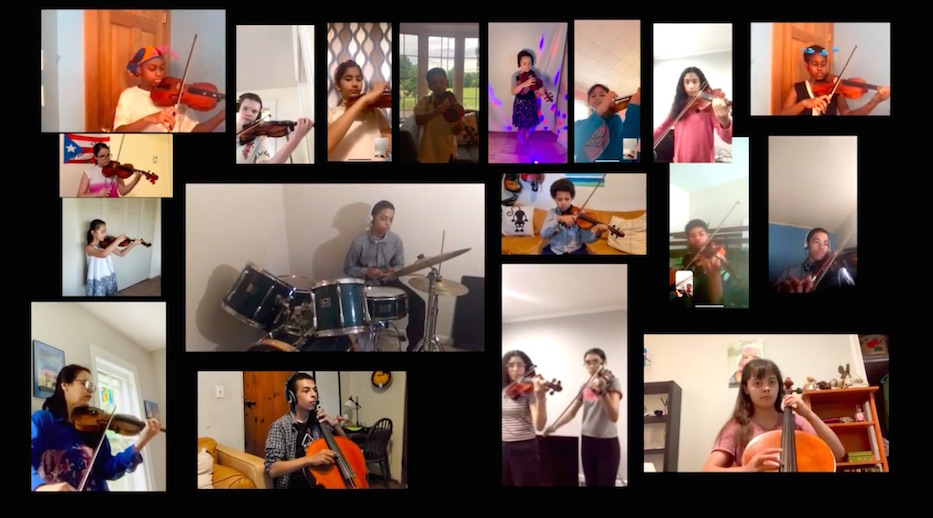 Students sit in front of doorways, in living rooms, close to desks and bookshelves. They look around, as if they are ready to say hello. One has a halo of blue hearts floating over her head. Strings lift. A drum kit enters the fray. Somewhere a cymbal crashes with the sound of tin.

It marks the beginning of Ben E. King’s “Stand By Me,” covered by 15 budding string musicians at the nonprofit Music Haven. All of them are violin students of Yaira Matyakubova, artistic director at Music Haven and a member of the Haven String Quartet. It was recorded this spring and released this month, as a tribute to parents, grandparents, and first responders who have been standing by during COVID-19.

The piece was arranged by Philip Boulanger, a cellist and senior resident musician with the organization. The video was mastered by Mateusz Zechowski Recording Services.

The video is the brainchild of student Yovahni Cruz, a rising eighth grader at Wexler-Grant Community School. Cruz’ inspiration was twofold: students had already mastered the song and performed it during their winter concert last year. Months later, he found his practices limited to a screen. He misses playing onstage with his classmates.

It also happens to be his grandmother’s favorite song. In the finished video, he dedicates the performance to her—the woman who taught him badminton, hand-drawn dazzling birthday cards, and can whip up what may be the best brownie in New Haven. As a young musician, he’s inherited her taste for “that old time music,” including King and Earth Wind & Fire.

“She is the person who takes care of me when my parents have to go somewhere or do something,” he said. “I know she likes seeing me play. When the video came together, I texted it to her. It was a surprise.”

Matyakubova said it feels fitting. In mid-March, the organization closed its physical doors and moved teaching online, navigating distance learning that soon became a conversation around access to technology and food. At that time, Connecticut was entering its first spike in COVID-19. Three of Matyakubova’s violin students have parents who are first responders at Yale New Haven Hospital.

“‘Stand By Me’ is what we have experienced through our families,” she said. “When COVID hit, the focus shifted into families, and became about reaching out to families. A lot of times when I would call for lessons, we would talk to whole families. A lot of people lost their jobs. Many lost income. Keeping those lessons consistent really helped to uplift the spirits.”

The project was easy enough to complete, she added. Using a click track, she had students from different levels record their parts on video, then sent them to Zechowski. One of her violin students, Prince Davenport, is also a drummer. She asked him to record a second video that sets a consistent rhythm for the song.

Matyakubova also said that it became a way to inspire students across the distance. Violinists of all different levels are in the program: some of them are beginners, and a few are in the organization’s "Music Bridge" program. The finished video gave them a chance to see older students in a period when sharing a stage, auditorium, or practice space is no longer tenable.

“I love it,” she said. “I really love it. Being separated has been so difficult for all of us, and playing music together has been what we're all about. And I think it gives them something to look forward to. It was just to cheer people up, have that sense of hope that we'll come out of this stronger and more loving.”

It comes in a month of good news for Music Haven: the organization received $50,000 from the National Endowment for the Arts (NEA) at the beginning of June. The funding is part of the NEA’s Art Works program: Long Wharf Theatre and Elm Shakespeare company also received funding, at $20,000 and $15,000 respectively. The endowment distributed a total of $84 million across 1,015 organizations.

“These awards demonstrate the resilience of the arts in America, showcasing not only the creativity of their arts projects but the organizations’ agility in the face of a national health crisis,” said Mary Anne Carter, chairman of the National Endowment for the Arts. “We celebrate organizations like Music Haven for providing opportunities for learning and engagement through the arts in these times.”