Nathan Hale Students Dance Their Way Around The World

Dance teacher Briana Bellinger-Dawson, who has used the year to innovate in the classroom. Screenshot via Google Classroom.

Briana Bellinger-Dawson waited patiently in front of the Google Classroom screen, her image staring back at her. One by one, faces popped onto the screen in one-inch boxes. Students arrived from their living rooms, some still in their pajamas. Others looked into the camera from their classrooms, masked and at socially distanced desks. All of them stood, ready to dance.

Bellinger-Dawson—or as she is known and loved among students, simply “Ms. B”—is a dance teacher at Nathan Hale School in the city’s East Shore neighborhood. As some students return to the classroom and others stay remote, she has learned to bridge those worlds with movement. Recently, she has been taking students on weekly “field trips,” where they can travel around the world through dance. After visiting Puerto Rico with bomba, she prepared first graders for an Irish jig on a recent Thursday morning.

“It’s fun to get them up and moving,” she said. “A lot of students, they’re just stuck on the computer in the same spot, and I think it’s a lot for them. I love the fact that they [first graders] have dance at the beginning of the day. They’re coming alive, they have that energy, and they’re ready to learn.”

The pandemic has pushed her to innovate in the classroom. Prior to Covid-19, Bellinger-Dawson taught every class in person, meaning that students were constantly cycling in and out of her classroom. While it was “a lot,” some things were easier, she said—like directly engaging students who didn't want to dance. When Covid-19 shuttered schools last year, Nathan Hale was the first to close.

For months, she taught from home while also shepherding her eight-year-old son through remote classes. When elementary schools reopened in January, she returned to the school to teach, but remained on a screen. Each class, she logs into Google Meet and greets students from an empty classroom, ready with a warmup and a lesson. She estimated that in her first grade classes, about 16 students have remained remote. While all of her first graders turn their cameras on, she struggles to have the same amount of contact with her older students.

She’s learned to be responsive with her medium, she said. Sometimes, students tell her that a family member is sick, and she folds yoga and meditation into her lesson plan. Others, students do improvised gratitude dances, where they dance through the things they’re grateful for. She’s taken advantage of virtual programming through the Shubert Theatre and videos online. On a recent Thursday, she prepared to take the class to Ireland via YouTube.

Students logged in one by one, most of them on time for their 8:15 a.m. class. Her screen became a patchwork of masked and unmasked faces, students waving to her as they got ready to move. Amanda Rodriguez, a first grader who is learning remotely, offered a toothy grin. A fleet of pink bows and sweatshirts appeared at the bottom right of the screen as teacher Ryan Reynolds brought his classroom into view.

Dawson flipped on Meghan Trainor’s “Better When I'm Dancin'” and started to move from foot to foot. She lifted her arms skyward, going airborne for a moment. The words “Stronger Together,” printed in a circle on her sweatshirt, came in and out of focus. At home, students jumped and bobbed along. In their classrooms, they began to warm up in place. Only one remained at his desk, his head down as the music pumped into the room.

The field trips are part history, part movement. As a dancer herself, Bellinger-Dawson said she wants to expose her students to a world that exists beyond New Haven, particularly when students are unable to travel. In early March, she wove in bomba to teach students about Puerto Rico. Earlier in the year, she taught physical isolations that are part of African dance. In preparing them for the jig, she gave a crash course on Céilí dancing, a form of Irish dance that dates back to the 1500s.

“It’s only fair that we get off the plane from Puerto Rico, and we go all the way to Ireland,” she said after Trainor switched to Maroon 5, and students jumped and whirled their way through the lyrics. “There’s round dancing, there are reels, and there are jigs. Unfortunately because of Covid, we can’t do round dancing right now. So we’re gonna do a jig.”

She pulled up a short video in the Google classroom. On screen, a woman appeared on a bright round rug, walking Nathan Hale's pint-sized dancers through the steps up a jig. She pulled on her leather ghillies—Bellinger-Dawson has long coveted the shoes, she told students—and bounced up and down against two clover green walls. Soon, students were dancing in their living rooms and beside their desks. One foot pointed forward, one foot back. Knees lifted in not quite unison. They tucked their hands behind their backs.

“My friends! Round of applause! I’m so proud of you!” Bellinger-Dawson said as they finished their first attempt at a jig.

As she mastered the steps between her couch and coffee table, Sophia Gonzales Miranda added her dog Chase to the mix. Lilliana Mongillo double checked her footwork as her little sister toddled into the room and pressed her red ringlets up to the computer’s camera. In their classrooms, teachers got in on the dance steps, moving along with their students.

Bellinger-Dawson said that pets, parents, siblings and stuffed animals are all frequent additions for students who are still learning from home. For masked students who are now back at school, she builds in time for them to catch their breath and take socially distanced sips of water.

The most important part of class, she added, is to keep moving. In addition to weekly field trips, she’s found that freeze dancing—in which students freeze when the music stops—works particularly well over a screen. She chooses exuberant, propulsive music meant to start a day of learning, including BTS’ “Dynamite” and Blanco Brown’s “The Git Up,”  (a crowd favorite among both students and teachers).

From home, Amanda Rodriguez brought her teddy bear Chocolate and stuffed unicorn Strawberry into the frame, moving until suddenly the sound cut out. Jaxson Orosco did the robot, freezing expertly as Bellinger-Dawson stopped the music. In their classrooms, students lifted their arms and hopped from foot to foot.

“You guys are so good!” Bellinger-Dawson exclaimed before the end of class. “I keep thinking it’s the WiFi, because you’re frozen!”

While the class is primarily about movement, both Bellinger-Dawson and her fellow teachers said that they see dance as catalytic—it often lifts students' moods. Teacher Briana Amodio, who started at Nathan Hale during the pandemic, said that she can see a change in her students during and after the class that stays with them as they learn throughout the day. She enjoys it too: Amodio studied dance for 15 years in North Haven. She’s a big believer in dance and movement breaks. 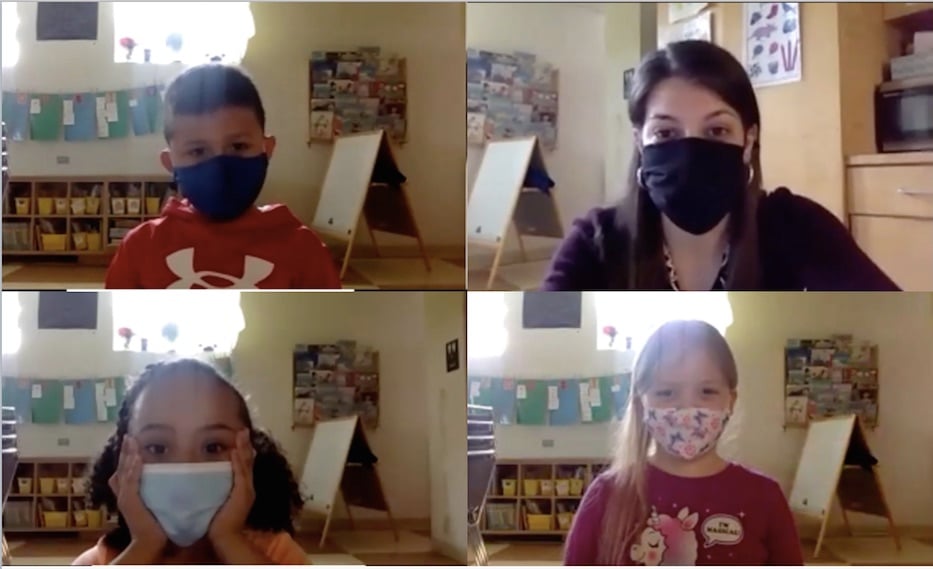 “Some of them are really in it, they get up first thing, they’re very active, they communicate through it,” she said. “And then some of them, they kind of just sit back, relax, they take it all in. A lot of it has to do with the space that we have in the classroom. But it is a great start to the morning.”

Her students agreed. At home, first grader Federico Cusano listens to Kidz Bop on YouTube and dances with his parents. After months away from school, he was excited to bring his moves back into the classroom. Jazleen Crespo, who is also Amodio’s student, is a fan of getting out of her chair before a day of looking at the screen.

“I like that there’s a lot of music and you get to get out of your seats, because I don’t like to sit,” she said. “I get that from my brother. I like that you get to move around, because I like to see other people's dance moves too. "

Grace Somers added that she likes the music that Bellinger-Dawson plays, which is helping her get back into a hybrid rhythm after months away from school. The freeze dance is now part of her routine, as much as mask wearing and searching for worms with her friends at recess.

"It's weird and it's fun and it's challenging," she said. "You never know when the music is going to stop."