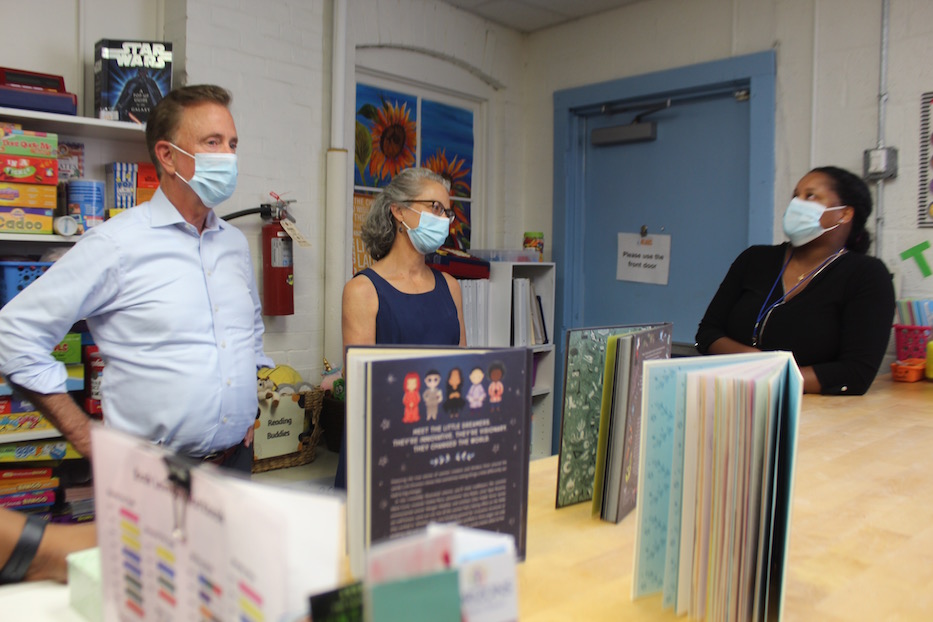 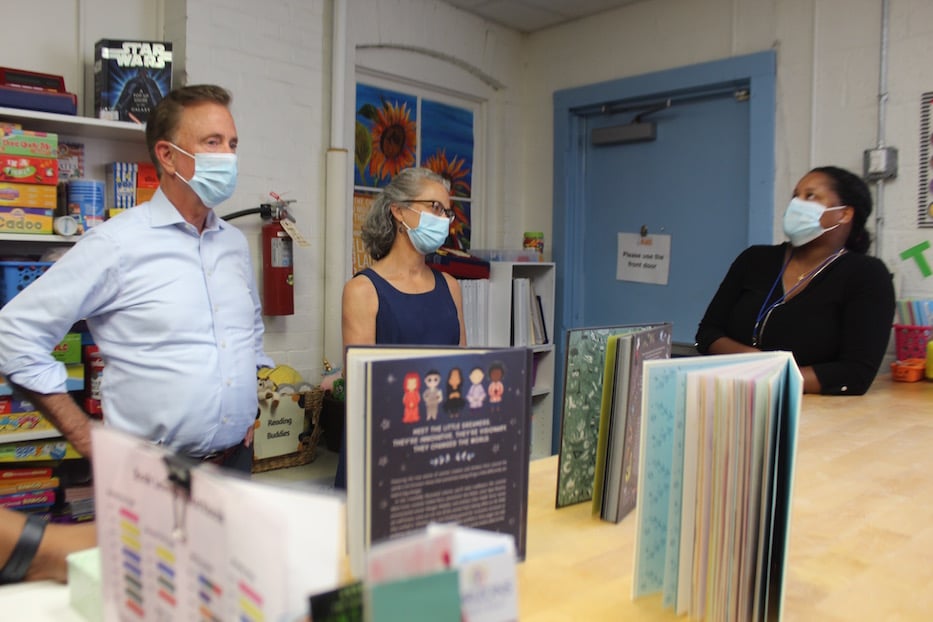 A local literacy incubator made the pitch for continued statewide support Friday—by showing what it is already doing. Now, it has the governor’s office on board as it grows its footprint.

The governor spent 15 minutes walking from table to table, talking to students in the nonprofit’s art club about their favorite books, and learning about New Haven Reads’ growing mission. Winfield joined him as they perused the shelves and discussed every Connecticut child’s right to read.

The organization, which will celebrate its 22nd birthday next spring, offers free tutoring to kids who are reading below grade level. Since it launched in 2001, it has served over 4,500 students. 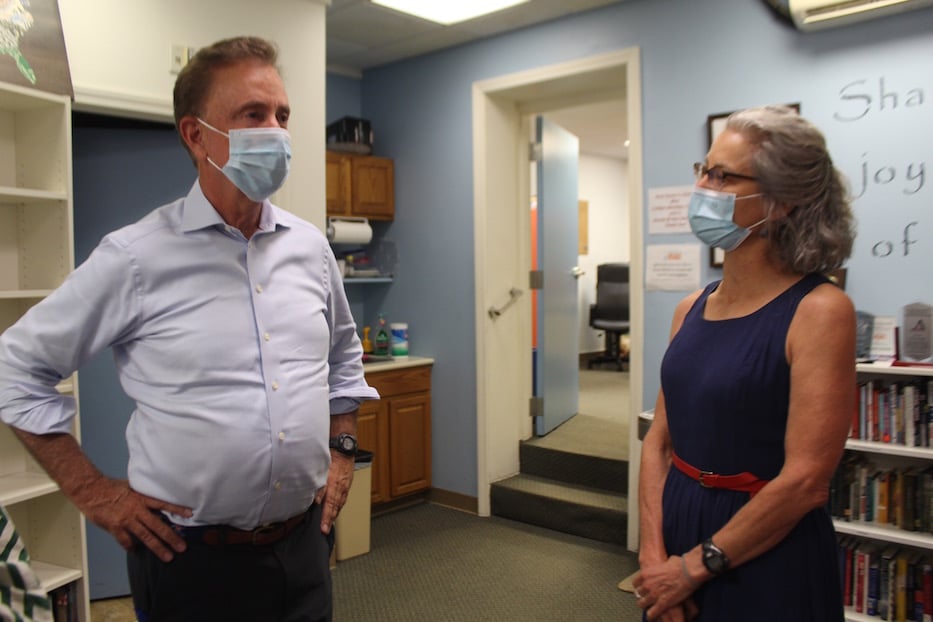 “It’s been really hard,” said Executive Director Kirsten Levinsohn, who steered the organization through the pandemic. “This is such an important resource for the community … we’re grateful for your support.”

Founded by the late Christine Alexander in 2001, New Haven Reads began as a book bank in Alexander’s garage, and has grown to sites on Bristol Street, Willow Street, and Science Park that buzz and bubble with young voices throughout the day and into the afternoon. When the Covid-19 pandemic hit in March 2020, it braved the online pivot for months, then made the cautious return to in-person tutoring in the summer of last year. Its overall operating budget is roughly $1 million, for which it recently received $50,000 in American Rescue Plan Act funding allocated by the state.

That kind of funding is critical, said Levinsohn. The organization currently tutors 300 students during the school year (there are closer to 150 during the summer), and has 139 students on its waitlist. It has also continued to grow: this fall marks a new partnership with Bishop Woods Architecture & Design Magnet School, through which it will work with 12 students over two days per week. In January 2023, it plans to bring on another 12 students for a total of 24 students.

The transition to the school is part of the organization's effort to “be more neighborhood based,” Levinsohn said. She and staff know that there’s a need they’re not yet meeting: roughly one-third of New Haven Public Schools students read below grade level. Students who fail to catch up are less likely to graduate from high school and more likely to experience lost wages during their lifetimes. 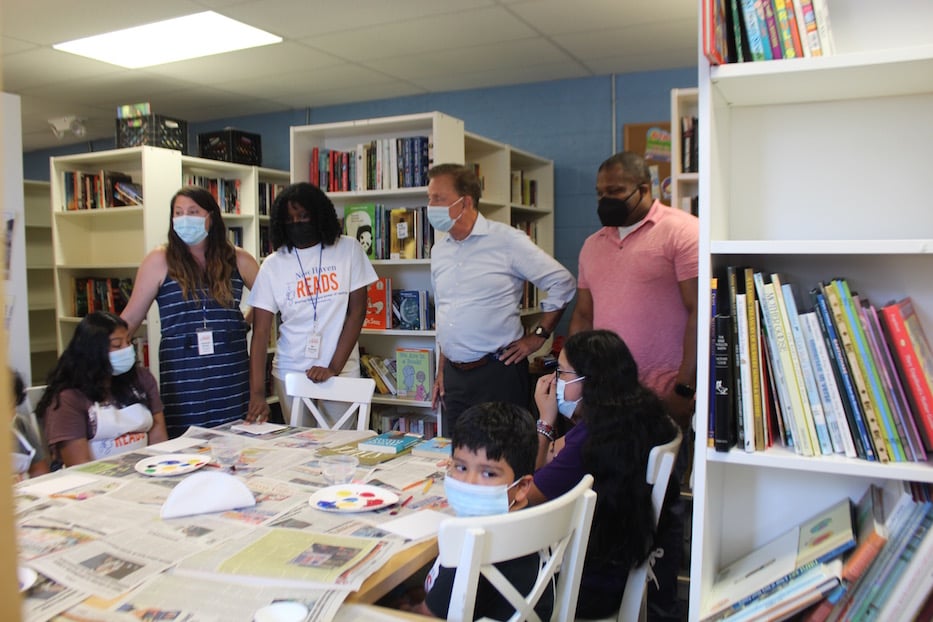 Lamont visited the art club. Sultanya Hamid, who leads the club, is one of NHR's "Readers to Leaders."

There are few data-based national analogues to the organization, Levinsohn told the governor Friday. Using a one-on-one model, students work in one-hour increments with tutors, splitting their time between the online literacy program Lexia, a reading workbook, and a book or graphic novel from which they and their tutor can read. The final 10 minutes are reserved for “choice time,” during which fierce games of Uno, Hedbanz and Connect Four unfold alongside each other.

Students are also invited to take books home from the book bank, and receive new books twice a year at each of the three operating sites. While there is a full-time staff, roughly 270 volunteers (including this reporter) keep the model running, according to the organization’s 2020-2021 annual report.

Instead of simply talking to the governor about that work, staff members showed it off during a walkthrough of the 45 Bristol St. space, out of which they’ve worked with students for well over a decade. Winfield beamed and smiled beneath his mask as he made his way through the building: he has long been a champion of the organization and had it in mind when he proposed and fought for the Right To Read Act during the 2021 legislative session.

Taking Lamont through the front room-turned-book bank, Levinsohn described New Haven Reads’ outsized impact, which ranges from pre-k and kindergarten programs to 60,000 books distributed through the book bank each year. She’s found that kids gravitate toward both what she calls “the classics”— Diary of a Wimpy Kid chief among them—and new titles, from graphic novels to chapter books. 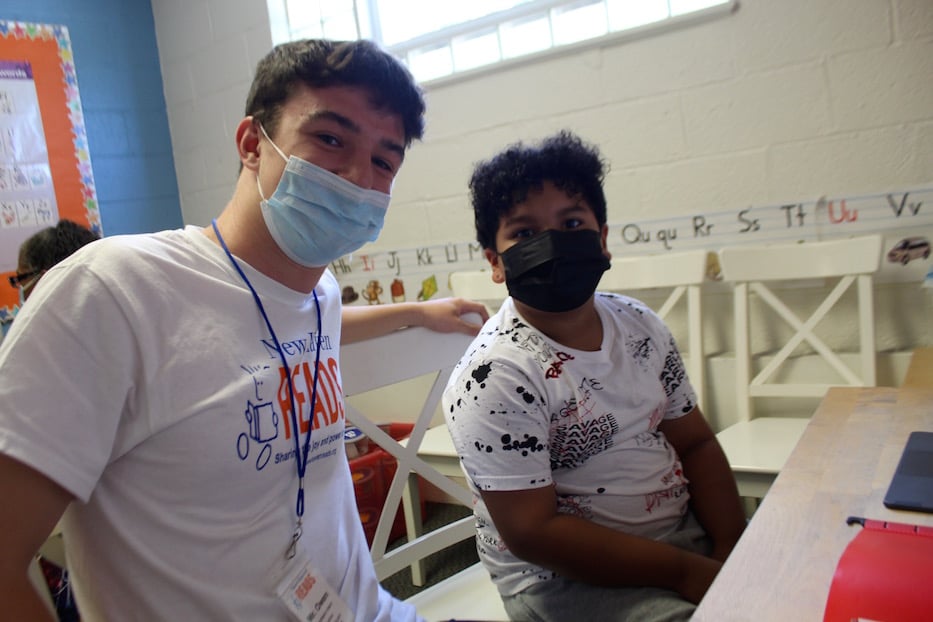 “How are kids with books in this day and age?” asked Lamont, scanning the shelves to see if any of his favorite historical biographies had made the cut. They include Ron Chernow’s biography of Alexander Hamilton, now the basis for the eponymously named Broadway musical.

“They love them,” Levinsohn said. “And you should see them clutch those books to their chests.”

As they walked into the back rooms—reserved for weekly tutoring—copies of I Am Malala and Rad Women Worldwide peeked out from atop a filing cabinet as if to say hello. On a shelf nearby, The Hate U Give flashed its black, pink and white cover. A few yards away, newly minted Hopkins School graduate Owen Lamonthe worked with 8-year-old Cheniel Beniquez on Lexia.

Cheniel said he likes New Haven Reads because it makes him a better student. On his tutoring table, white lettering popped up on his blue Lexia screen. When he got an answer correct, the program made the small, chirping sound of a bell to let him know he was on the right track. 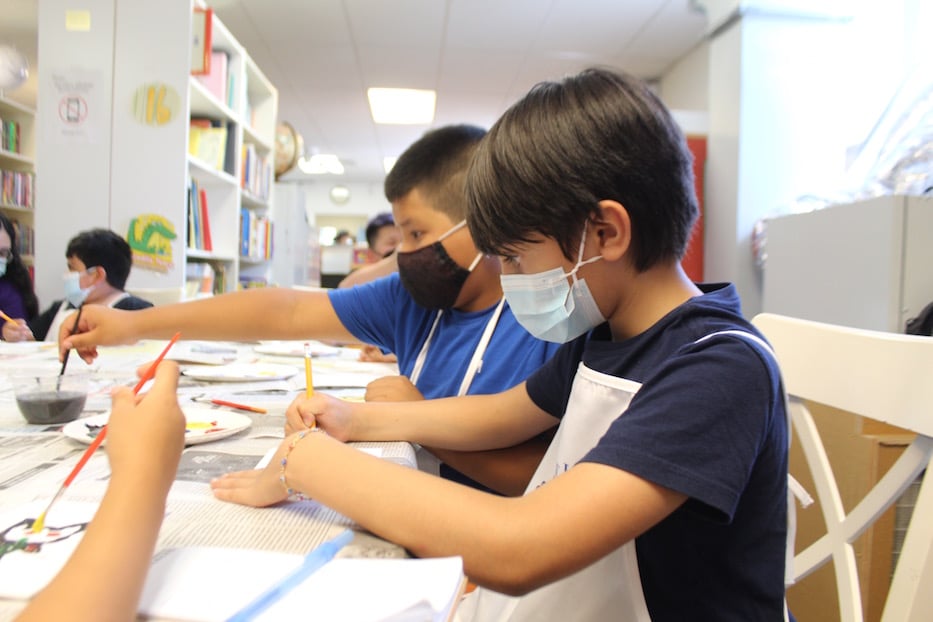 Leo. A talking pink panther emerged on his small canvas as he praised New Haven Reads.

One room over, Bristol Site Director Aimee Curtis-Travaglini and Assistant Site Director Jailene Garzon bounced through the space, making sure everyone had what they needed. Years ago, Garzon came to New Haven Reads as a student. After leaving the program, she returned to volunteer as tutor, studied graphic design at Gateway Community College, and then stayed to work there as an assistant site director.

As they gave him a quick overview of the site, Lamont explored the snugly packed shelves and neatly numbered tables at which kids and tutors sit each day.

Almost everyone in the space, it seemed, had a memory or story about the power of reading in their own lives. Joseline Tlacomulco, a graduate of the University of Connecticut who is currently working with the campaign to reelect Lamont, pointed to how much her younger brothers learned when they were students at New Haven Reads. As head of the art club and a member of the organization’s “Readers to Leaders” program, 19-year-old Sultanya Hamid recalled coming into New Haven Reads as a first or second grader, when New Haven Reads had a different site at Science Park.

Hamid’s problem wasn’t reading, she said—she could read a book “from front to back” without any difficulty. She knew how to recognize letters and saw how sounds fit together like the pieces of a puzzle. Her problem was reading comprehension. After she finished a book—any book—“I couldn’t tell you what it was about,” she said. New Haven Reads helped her hone her understanding. Now she’s a rising sophomore at Wesleyan University, where she plans to study education. 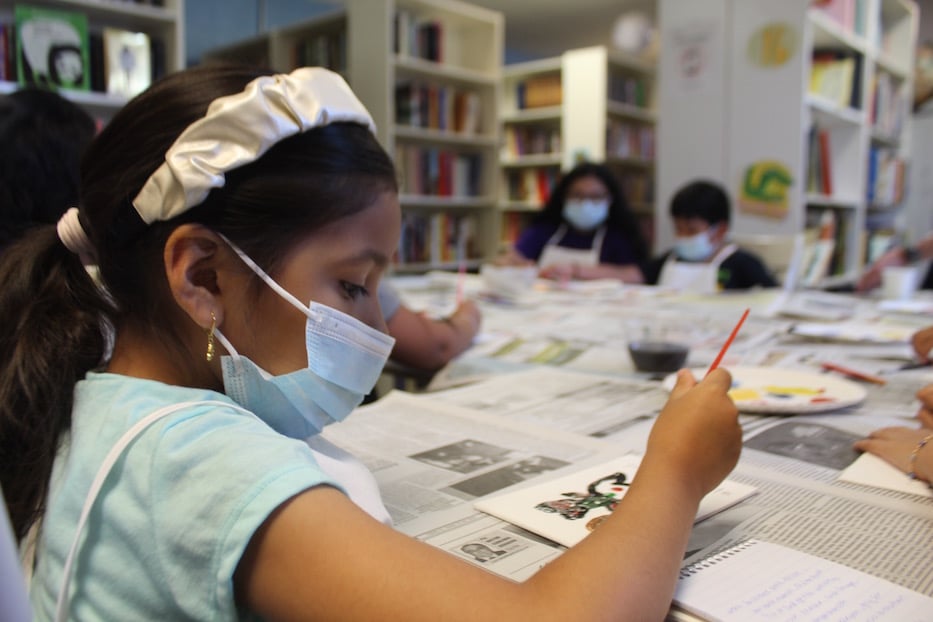 Even Lamont recalled how his daughter Lindsay once struggled with reading, a hurdle he and his wife overcame by reading to her and working on literacy at home. At a table in front of him, members of a summer art club reimagined book covers with their favorite literary characters, from a talking pink panther to a red-and-green version of Hello Kitty with a thick brown heart floating on her right side.

“It helps me read,” said Leo, a rising third grader at John Daniels School of International Communication, as he painted. “There’s a lot of books here.”

That love for literacy—and belief that it can help close Connecticut’s opportunity gap—carried back to a table in the front room, where Lamont sat down with Levinsohn, Development and Communications Director Fiona Bradford, Winfield and Tlacomulco. Outreach Director Fernanda Franco and Office Manager Jo-Ann Williams occasionally walked through the space, ducking into the back room every so often to meet a kid’s end-of-the-week-need. 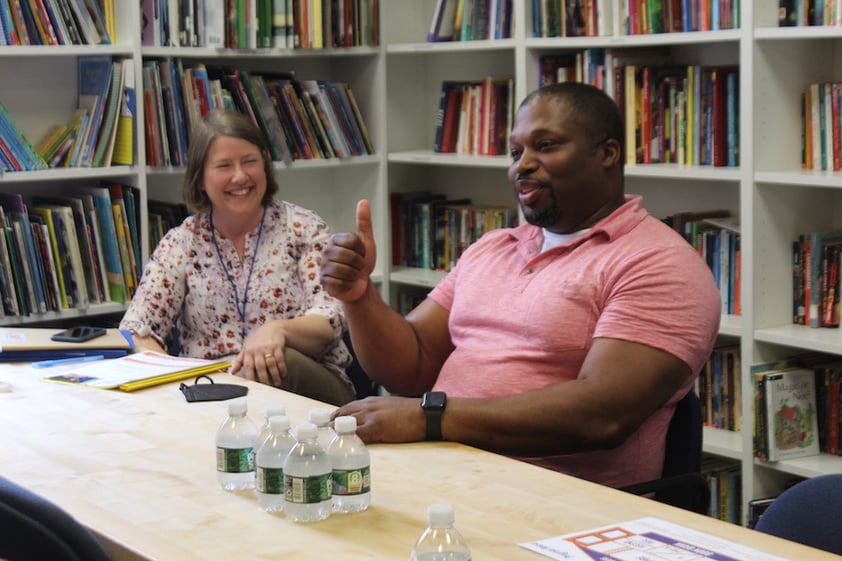 Before speaking about literacy as a legislative priority, Winfield spoke about how his son Keyari, now 16, used to struggle with reading. When Keyari was just eight or nine, He was behind his grade level on literacy—a problem that his elementary school did nothing to solve, Winfield said. With his now-wife Rasheda, Winfield took it on himself to study literacy learning, and implement those methods at home.

Keyari caught up. Now, that work has become one of his legislative priorities. He has consistently supported  the Connecticut Partnership for Literacy Success (formerly known as CK3LI), as well as the Right to Read legislation that passed last year. The act uses the science of reading—which is also New Haven Reads’ foundation—to set statewide literacy standards and allocate more resources towards education so that all kids can achieve them.

“To me, it [New Haven Reads] is unique,” he said. “It shouldn’t be unique. There should be more of it … we’re failing our children where we don’t have to. The children that are being failed do not have to be failed.”

Listening, Lamont noted that he sees literacy learning as a vital part of closing the opportunity gap across the state. He called it one of his administration’s priorities, pointing to funds allocated to summer learning programs through a now-annual Summer Enrichment Grant Program. The program is run through the Connecticut State Department of Education.

“If kids learn to love to read, that’s the greatest gift you can give them,” he said on his way out. “That’s what they’re doing right here. It opens your mind, keeps you learning for the rest of your life … It's a priority. Absolutely.”

New Haven Reads has 139 students on its waitlist and is currently looking for new tutors. Learn more about the organization here. Sign up to be a tutor here.