By the time Puma Simone realized she didn’t need the mic to perform Saturday, a few people in the crowd had already mentioned good energy. Simone took stock of the people around her. She hesitated with tears in her eyes. At her request, attendees picked up a beat for her to work with. Words tumbled from her lips, dedicated to a friend she lost to sickle cell disease earlier this year.

"So lets make it count/ for the ones no longer here but still around/ let's make some noise/let's make em proud/ give it all we got," she read out.

“This is what community looks like!” sang the crowd in response to Simone’s words. An “I love you!” came from the side of the group. Their voices rose in unison.

Saturday, that sense of community defined an earth bench reveal and festival that members of the Mud is Gold earth building collective have been working toward for months. Since late May, a collective of young builders has met weekly, with the goal of connecting with each other, with Newhallville, and with the earth.

The effort was spearheaded by Katie Jones, Community Placemaking and Engagement Network (CPEN) Founder and Director Doreen Abubakar, and Malcolm Welfare and Faith Lorde of Xevioso Alliance. Read more about it here.

Their goal, among other things, is to foster reciprocity between residents of New Haven and the land that surrounds them. In this case, that means the city’s Newhallville neighborhood, where the collective has been working on a bench made of mud in the lot of 130 Bassett St.

“It’s fun to see our program grow, and to see the community working on the bench together.” said collective member Jose Carrion.

Saturday, there was enough of that positivity to go around. Spuds Your Way and Los Mariachis food trucks provided good eats as performances by local artists took place right in the heart of the dirt. A drum circle ensued. The bench itself stood tall, ready to be touched as attendees inspected the dried mud, stones, and sweat that have gone into the structure.

Jones and members of Xevioso also made sure to turn Saturday into a party for the surrounding neighborhood. In one area sat a reading corner, with books that seemed to call out to some who rolled in for the party.

In another, a signature Mud is Gold banner was surrounded by paint, organizers welcoming attendees to add their own handprints as a symbol of collaboration.

Just short of 4 p.m., Welfare lifted a clay bowl filled with water, and blessed the spot where the bench had sprung up. As people wandered the lot afterward, Kompozure and Ro Goodwin (pictured above) singing in the background, attendees got a crash course in safe-to-eat berries on a nearby tree.

Throughout, members of Mud Is Gold described the bench-building experience as messy, sometimes smelly, and almost always a reminder of the economic and environmental power they hold.

Several spoke on how the project allowed them to get down and dirty, using their hands to craft something out of nothing with the earth’s materials. Most are New Haven Public Schools students, who were compensated each week for their labor.

“It definitely was a mess, but we’ve all been out here since the beginning and we’re really proud of our work.” said collective member Juan Patterson.

One boy said he had heard about the project through his english teacher at school, and then passed it on to his cousin so that they could volunteer every Saturday together. 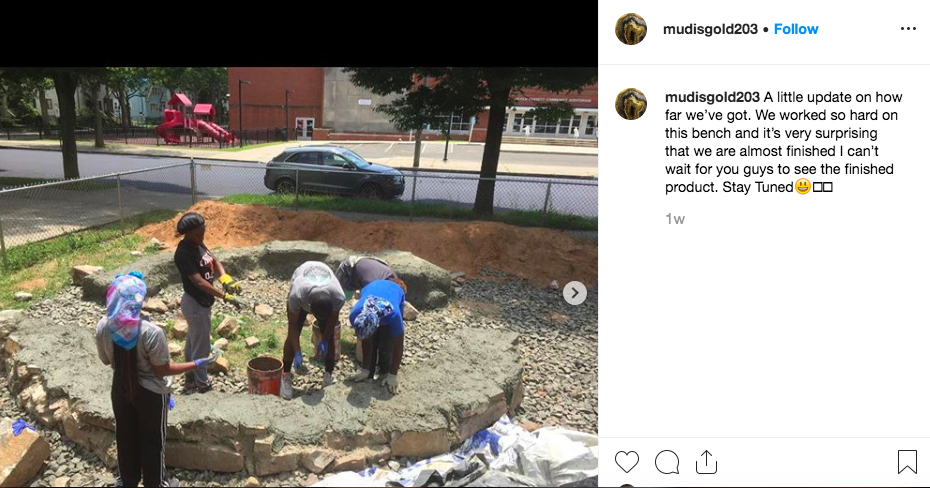 To Jones, Saturday was “a day to celebrate our connections with the earth, ourselves and each other as a community," and "a testament to many co-created relationships in this city.”

“I was so moved moment after moment,” she added. “The way everyone really showed up, offered support and shared with true heart.”

For the members of the collective, this bench is just the beginning. Lincoln Bassett School, which is directly across the street, will begin to use the bench as an outdoor classroom and has plans with CPEN to build garden beds and grow food around the lot. The collective also has plans to build more green spaces, and possibly solar ovens.