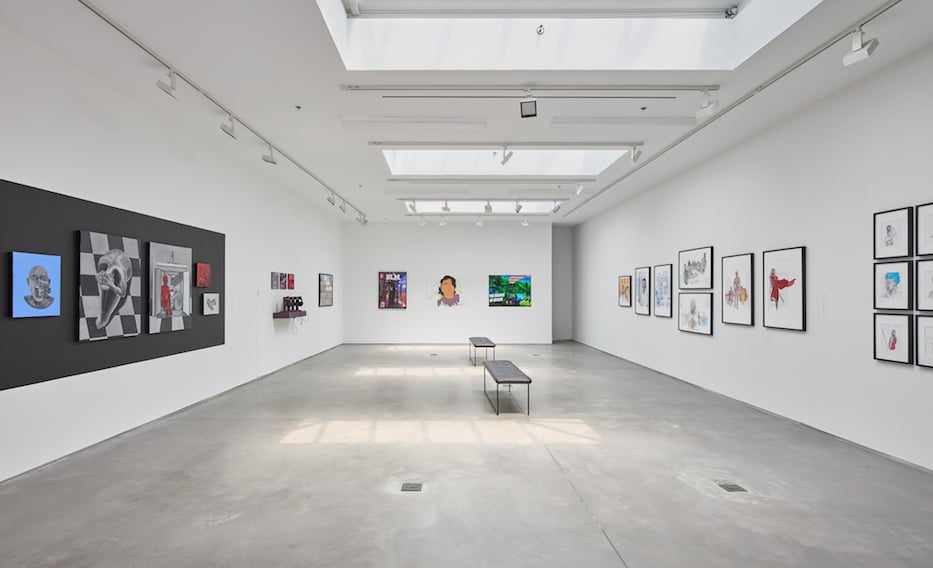 A young man in a hooded sweatshirt keeps his hands in his pockets. Behind him are the large windows and steel casings of a building’s facade. Drawn in blue ink on a large sheet of paper, the scene appears ordinary with one exception. In Aime Mulungala’s detailed self-portrait, his flesh tones have been supplanted with electrifying colors: vibrant pinks, neon green, blue, and yellow. Mulungala’s expression remains fixed as he envisions Blackness through the emotive power of color.

More of Mulungala’s works on paper are on view in Roots to Benevolence, the inaugural exhibition of NXTHVN’s apprentice program. With paintings, drawings, music, writings, and digital art, the show is the culmination of each student’s one-year project. Alongside Mulungala, four other apprentices are represented with pieces by Mekhi Banks, Kaitlyn Higgins, Ashlynn Topper, and Donte Warren.

Over the past year, student program manager Jay Kemp stayed in touch with this group of New Haven students, meeting virtually when necessary. From brainstorming to planning the opening celebration, Kemp entrusted the apprentices with all aspects of the show. To start, the students devised and then pitched their ideas for the exhibition to NXTHVN founders Titus Kaphar and Jason Price.

Kemp underscored the importance of presenting their plans as one of the many ways that the program combines personal and professional development for the apprentices. A life coach who previously worked at The Future Project, he said that “I really wanted them to dig inside and share who they are in these works.”

The exhibition offers a glimpse into the past year through teenage eyes, from different vantage points. For example, Mulungala’s series focuses on his experiences as an immigrant living through twin pandemics in America—COVID-19 and racism. Born in Ghana, Mulungala endeavors to use his artwork to upend misconceptions about his African heritage. 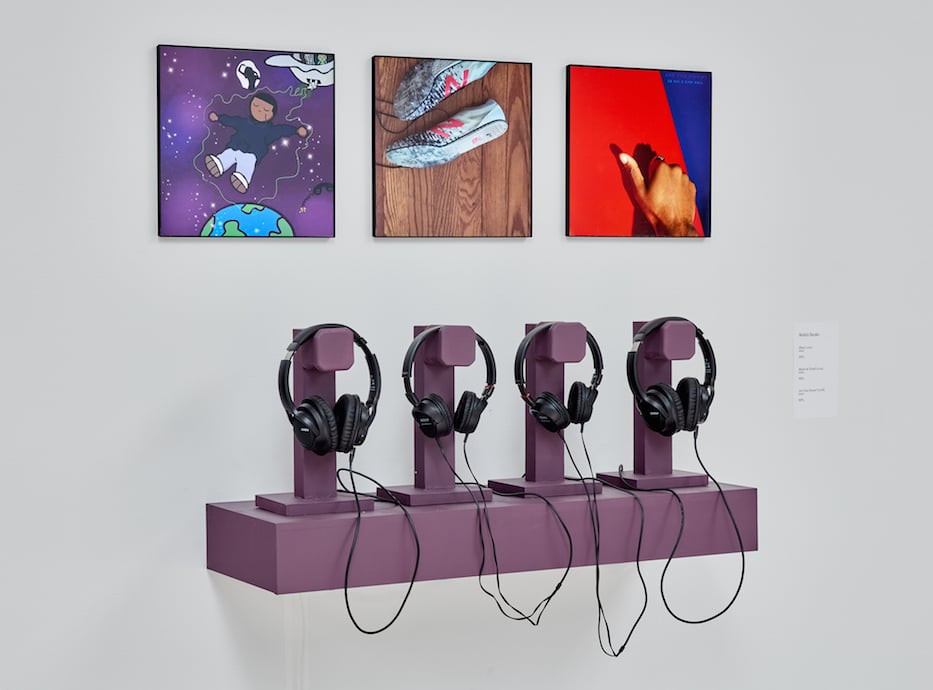 To the left of his aforementioned portrait, a smaller square drawing by Mulungala illustrates two Black women in front of an earth-toned wall. Covered with red and black symbols, this backdrop depicts the connection between the women and African cultures, Kemp said. This drawing becomes a visualization of the women's roots, touching on one of the show’s broader themes.

Several of Mulungala’s works concentrate on representation, while other teenage artists tap into the confusion and trauma in the zeitgeist. The pain and suffering of the past year are most present in the suite of surreal paintings by Kaitlyn Higgins.

In Pseudoscience (2020), a small oil painting on canvas, the eyes of a bald androgynous person shut tightly while four fingers seem to crawl out of the mouth. The neck and head are disembodied, floating on a blue background, enhancing the disturbing nature of the imagery. Higgins’s paintings have been hung within a heavy black boundary, which emphasizes the weight of her subject matter.

Ashlynn Topper uses her skills as a digital artist to comment on the past year as well. From the gallery entrance, a large inkjet print portrays a digital rendition of Breonna Taylor. Instantly recognizable, her face is flanked by creative reinterpretations of video game covers. Mimicking the format and font for “Grand Theft Auto,” Topper has inserted the phrase, “Grief Through Adolescence” in another work. Around the text, she collaged photos of teenagers holding their faces in their hands. 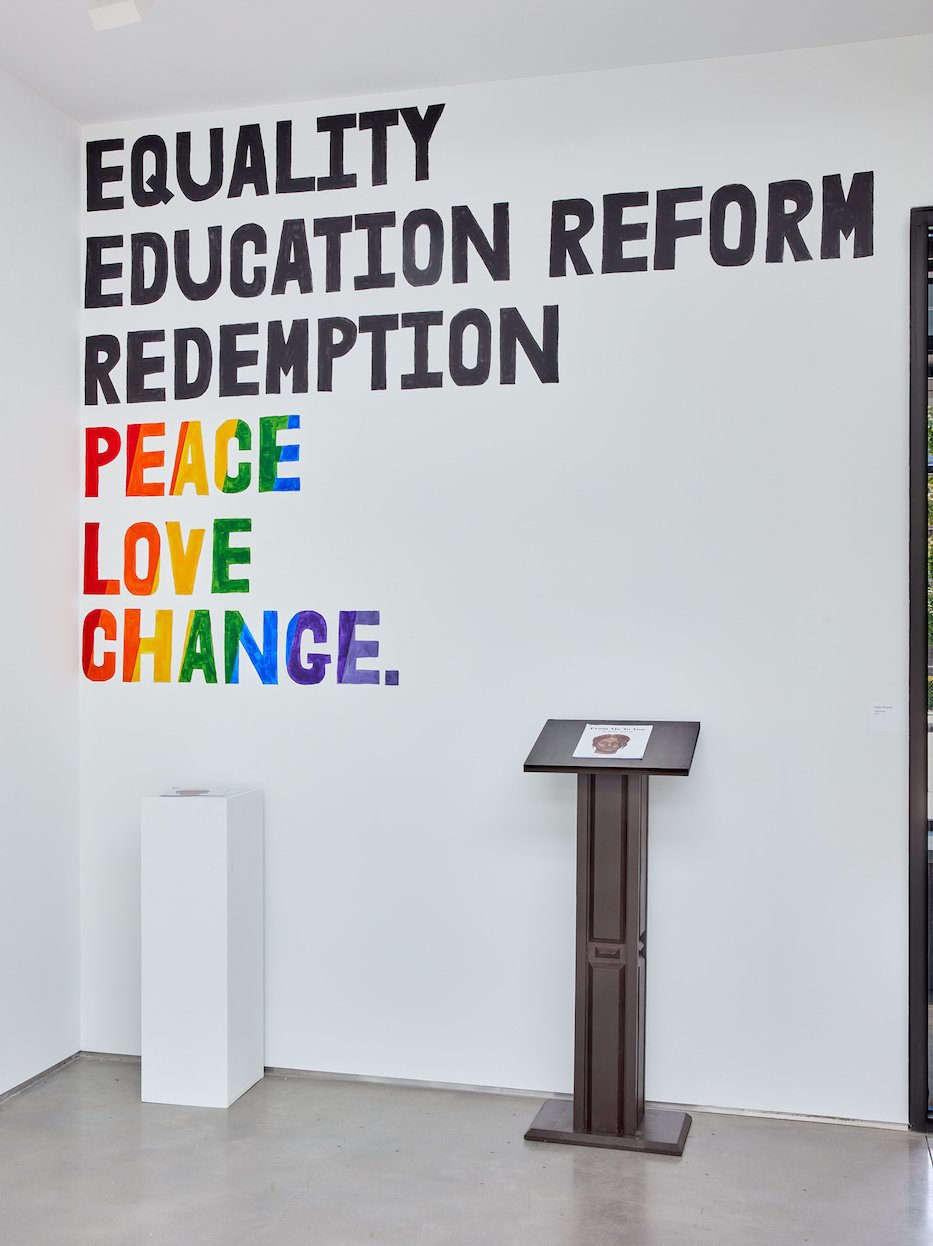 For all the raw emotions, an optimistic vibe arises too. Beginning at the top left corner of a wall, writer Donte Warren has painted the words, “Equality,” “Education Reform,” Redemption,” “Peace,” “Love,” and “Change.” The large text for these buzzwords is all black, except for the last three lines which have been spelled out using a traditional rainbow.

Warren’s poetry and a monologue are collected in a printed booklet titled From Me to You. The cover features an illustration by fellow apprentice Higgins, and inside, his poem “Out The House” opens with the lines:

I wasn’t down for the ride but I am now…

In the monologue, Warren describes the fatigue of being Black — how the protagonist can’t go into a bank with his brother without being watched. He ends with “I won’t stop fighting if you won’t.”

Meanwhile, an EP by musician Mekhi Banks strikes a positive note. Banks wrote, recorded, and produced the album at home over the past year. On the gallery walls, there are illustrations for three of the singles with individual headphones for listening. With an old school vibe that recalls the hip hop group De La Soul for Kemp, “Back on Track” has a catchy, uptempo rhythm that signals potential relief.

“This is all about possibility,” Kemp said, motioning around the gallery.

With speaking engagements and future exhibitions lined up for several apprentices, Roots to Benevolence provides more than documentation of a fraught year. The show marks the beginning of the journey for these creative professionals. 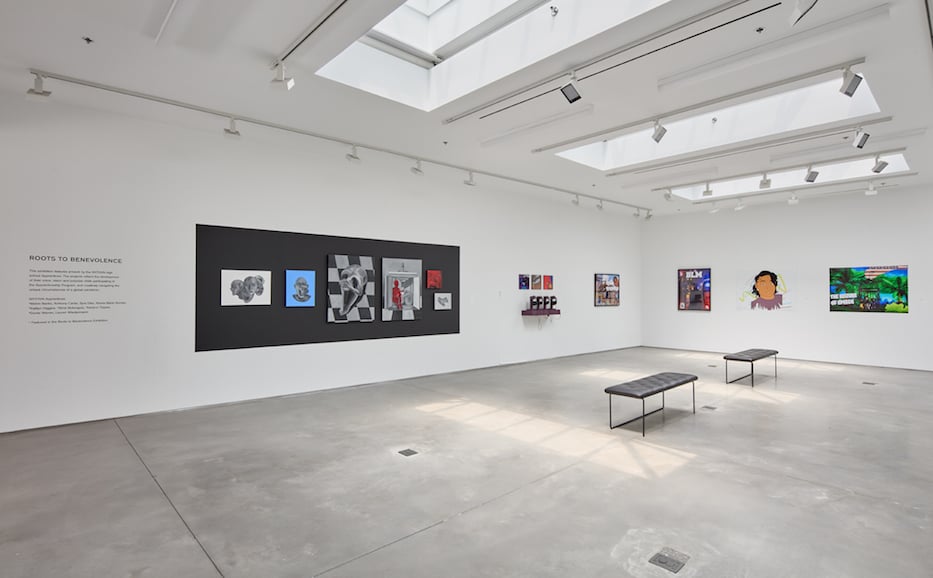 Roots to Benevolence continues through August 22 at NXTHVN.