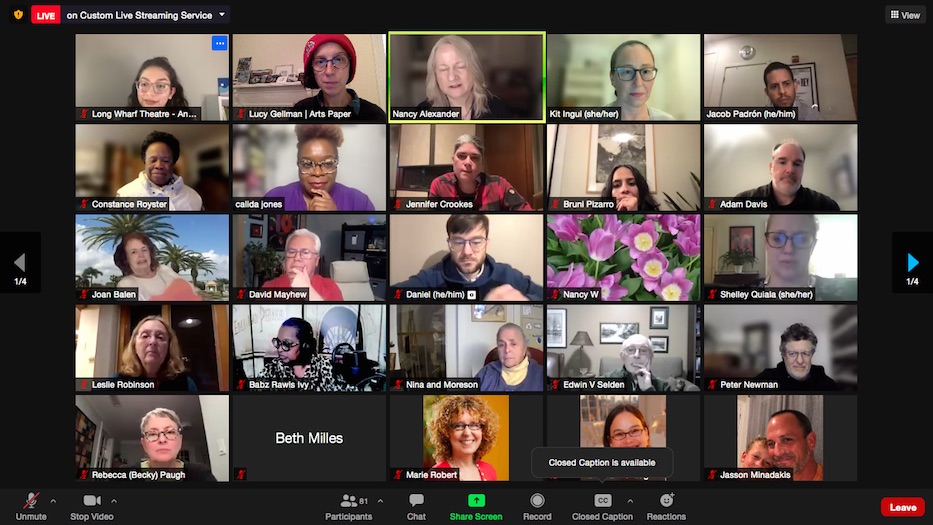 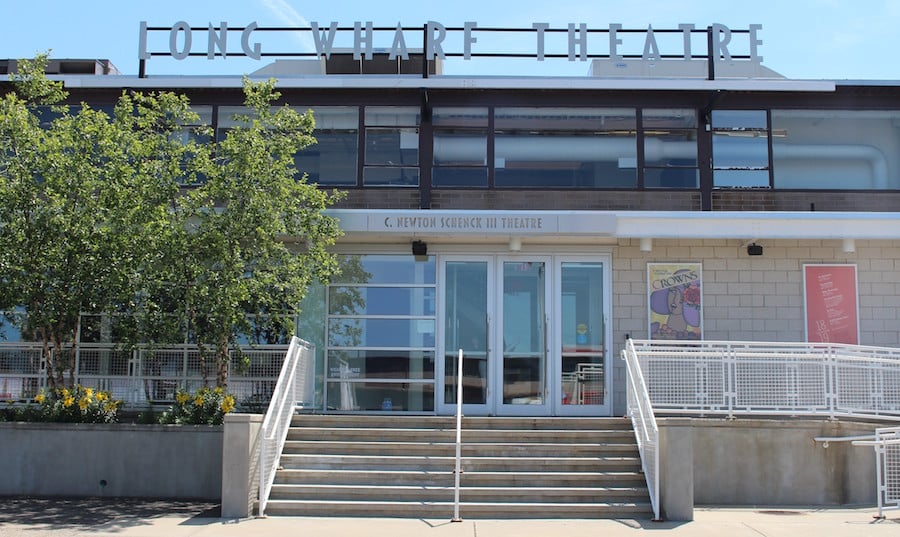 What will future performances look like without a permanent theatrical home? What will happen to five decades of costumes, set pieces, and rehearsal spaces? Will the quality of the theater be compromised? Are there institutional partnerships in place?

What about patrons who are grieving?

Those questions emerged Wednesday night, during Long Wharf Theatre’s first virtual “Town Hall” since announcing its move to itinerancy two weeks ago. Eighty-eight people attended the meeting, many of them artistic staff and board members at the theater. Four pages of tiny, Brady-Bunch like Zoom boxes also revealed longtime patrons, local arts leaders, and city residents ready to hear more about the theater’s plan to leave its longtime home at 222 Sargent Dr.

While it was advertised as a town hall, the session was more of an update on the theater’s choice to leave its building in June of this year. For the hour-long discussion, the chat function remained disabled for attendees. An institutional host kept all participants muted. No Spanish-language support was available. No attendees were able to ask questions in real time. Rather, theater leadership sought to answer questions submitted in advance of the meeting. While participants registered with their names and emails, all questions were read anonymously, as if they had been pulled from thin air.

Speakers included Artistic Director Jacob Padrón, Managing Director Kit Ingui, Board Chair Nancy Alexander, and Arts Consulting Group Vice President Calida Jones, who also serves as president of the Connecticut Arts Alliance. Serving as facilitator, Jones began by urging attendees—who could not weigh in publicly—to open themselves to comments, feel whatever they needed to feel, and “sit in that discomfort.” 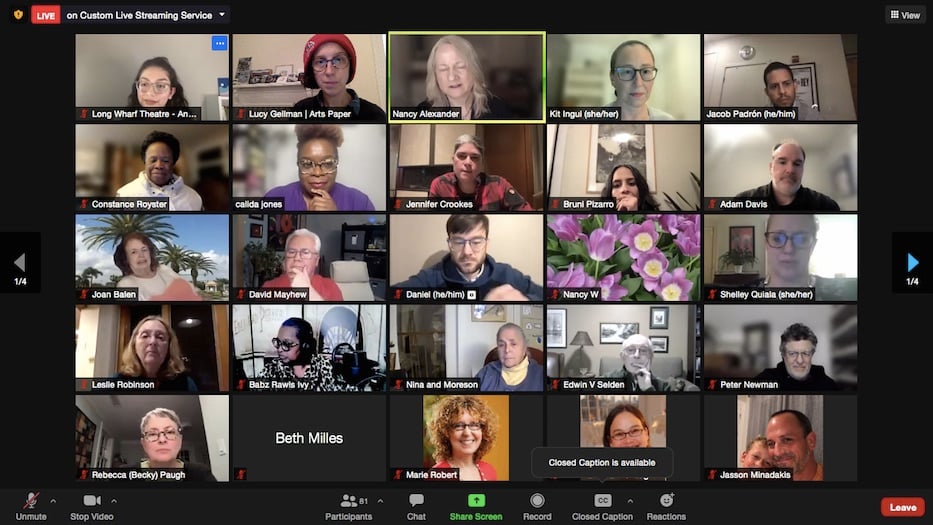 Throughout the event, the four addressed some of the questions, concerns, uncertainty, and outpourings of both support and grief that they and fellow staff and board members have received in the past two weeks. Speaking early in the evening, Alexander told attendees that the decision may have seemed abrupt, but was in fact years in the making. After a board vote, staff found out about the news the day before it went public with an article in the New York Times.

She attributed it to multiple factors, including increasingly precarious finances (more on that here and below), years of discussions about whether to leave the Food Terminal for a more accessible location, and the fact that the theater’s Sargent Drive lease was ending in June 2022.

“The issue was the overall operating model is one that we cannot sustain,” Alexander said. Long Wharf has since asked its landlord for a one-year extension to clear out the building.

Padrón stressed that the values of the theater are the same ones he arrived with three and a half years ago, including “artistic innovation, radical inclusion, and kaleidoscopic partnership.” Going forward, he said, both he and Ingui plan to lean on those partnerships, including with the International Festival of Arts & Ideas, Neighborhood Music School, Arts Council of Greater New Haven, the New Haven Free Public Library (NHFPL) and the City of New Haven. (In the interest of full transparency, the Arts Paper is a program of the Arts Council but editorially independent from it.)

But, he added, in that change is also the opportunity for “boundary-breaking” new work. He issued an invitation to both new and longtime patrons, painting Long Wharf as a big tent that has enough room for all of them.

Jones asked Padrón what a few performances for the 2023 season might look like. Even over a Zoom screen, he lit up in response.

Already, there are multiple “projects in development,” he said. One might look like working with actor and vocalist Bryce Pinkham to bring his one-person show, a musical about climate change based on Singin In The Rain, to production. Another might situate a work on the life of John Coltrane in one of the city’s historic jazz venues. A third could commission tap dancer Savion Glover with an original piece of music, or stage the 1989 musical Lady Day at Emerson's Bar and Grill in a bar.

Jones’ follow up: What about costumes, sets and rehearsal spaces? “What's gonna happen? Who is housing the costumes? Who is building the sets?” she asked.

Ingui jumped back in. First, she said, nothing of historical significance is bound for the dumpsters—she and theater leadership want to make that very clear. “As far as storage,” Long Wharf has already developed institutional partnerships for some of the objects that it will need to move (neither she nor any of the speakers provided specifics). The theater will also be working with archives and museums to store its objects.

As far as rehearsal space, “we will develop that with partner organizations and with our staff,” she said. “They are an active part of this conversation and they are exceptional thinkers as well as artists.”

Jones asked what a 2022-2023 season would look like if someone stepped forward to underwrite it. Alexander jumped in.

“It's an amazing concept,” she said. “I think we would have a full season. I think it's also important to point out that paying for tickets does not cover the full cost of a production.”

Three public listening sessions remain. On March 24, the theater will hold another town hall on Zoom from 7 to 8 p.m. On April 2, it will have its first in-person session from 2 to 3 p.m. at the Mitchell Branch Library at 37 Harrison St. in Westville. Then on April 7, it will hold a fourth and final session from 7 to 8 p.m. at its 222 Sargent Dr. building. Register at the theater’s website.

Itinerant, But Not Insolvent 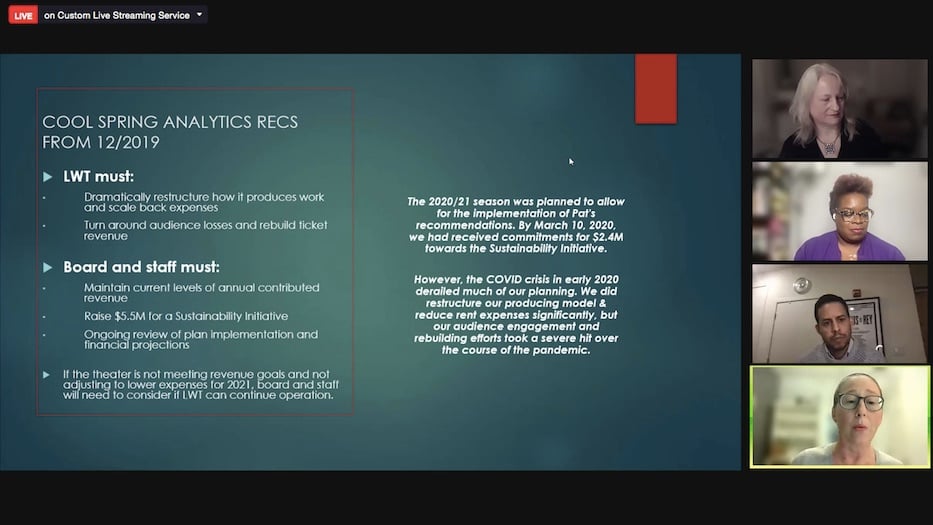 Early in the session, Ingui and Alexander also gave more financial and logistical insight on the move to itinerancy than the theater has provided to date. For years, Ingui said, Long Wharf has watched its attendance numbers shrink, sending the theater into a deficit at which it has been operating for a decade. After 1999, ticket sales and subscription packages declined steadily, and never rebounded.

“We're certainly not alone in this problem, but we needed to get to the root of that,” Ingui said. Three years ago, the theater contracted with Cool Spring Analytics, a consulting firm that finished and submitted its research in December 2019. Suggestions from Cool Spring co-founder Patricia Egan included dramatically scaling back expenses, recouping audience losses and ticket revenue, and raising $5.5 million in a “sustainability initiative.”

In 2020, Ingui said, the theater was well on its way to implementing those suggestions. By early March—just before it announced a season that became a casualty of Covid—"we had received commitments for $2.4 million toward the sustainability initiative.” Then the pandemic hit the state. By March 13, the theater had received state orders to close its doors.

“If the theater is not meeting revenue goals and not adjusting to lower expenses for 2021, board and staff will need to consider if LWT can continue operation,” Ingui read aloud Wednesday, quoting a particularly sobering section of the report.

Pulling up a presentation, she also laid out a rough plan for performances, educational programming, productions and new programming for the next four years. When it comes to prospective venues, that’s yet to be determined.

“We’re learning with this community, with all of you,” she said.