Read-In LEAPs Into Summer On The Green 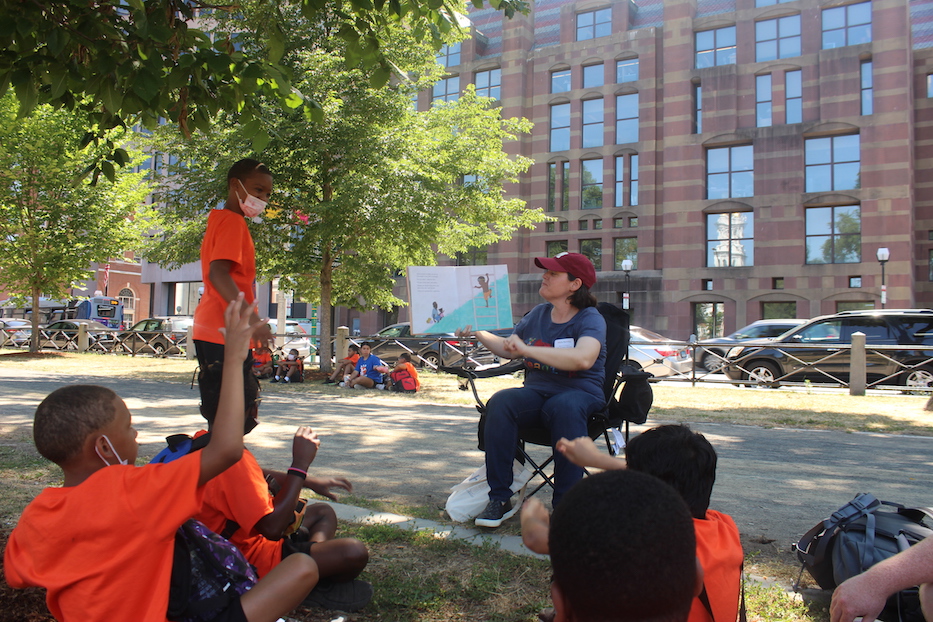 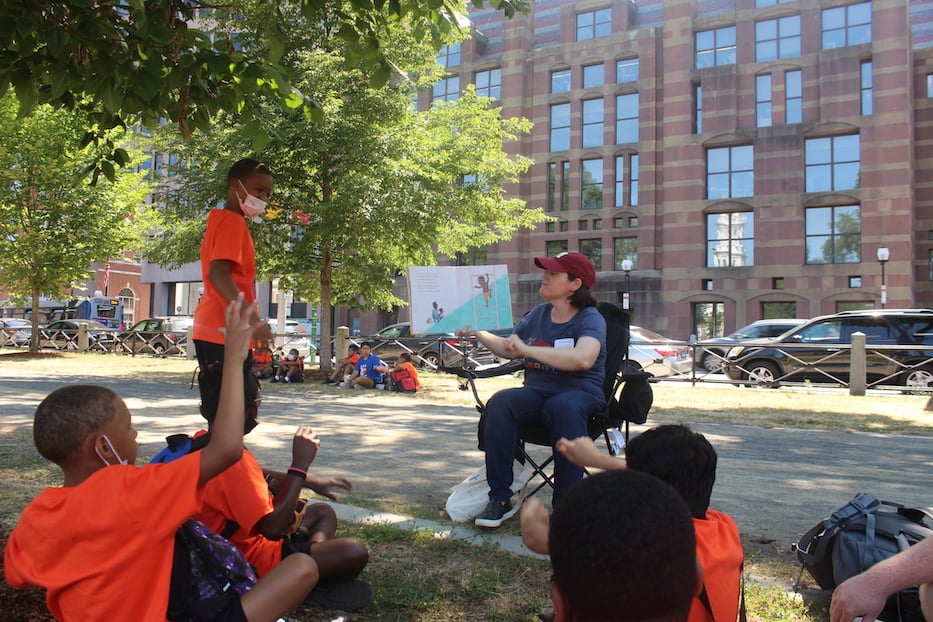 On the southwestern edge of the New Haven Green, six nine- to ten-year-old boys from Quinnipiac Meadows gathered around Maria Bernhey, a public services administrator at the New Haven Free Public Library. Some sat quietly, while others fidgeted or thumbed through the wood chips at their feet. Bernhey encouraged them to stand up and move around while she read.

She held up Gaia Cornwall’s book Jabari Jumps, and cracked open its cover.

Friday morning, Bernhey joined 700 seven- to 12-year-olds and 60 volunteer readers for LEAP’s (Leadership, Education, Athletics in Partnership) annual Read-In New Haven Green, a summer tradition that has run for over two decades. The readers used each page and book as a learning opportunity for the campers, reinforcing the importance of reading, no matter the time of year.

During the summer, the camp also holds the Read-In to work against the so-called “Summer Slide,” in which students risk sliding back grade levels if they don’t continue the learning that school provided a framework for. 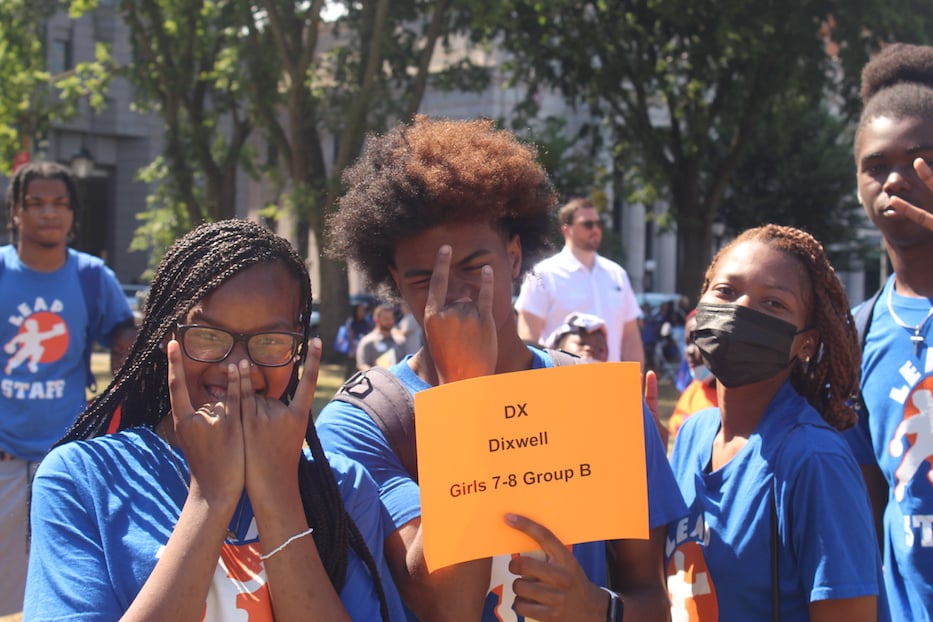 A'myia Thomas, Tu' Prece Kelley, Adrel, and Donte Carter, camp counselors and friends. Three out of the four attended the camp as kids, which they credit with encouraging them to read over the summer.

“Some kids don’t get the opportunity to read over the summer or they just don’t want to, so I feel like it’s a good way to keep them reading,” said A'myia Thomas, a LEAP counselor who attended the camp as a kid.

This year marks the organization’s first return to the Green since 2019. In 2020, LEAP held remote and in-person summer camps, but did not have the read-in on the Green. Then last year, students participated at their individual summer sites across the city.

As the sun rose, the Southwestern edge of the Green filled with hundreds of kids in bright orange LEAP t-shirts. High school- and college-age counselors rallied the kids into small circles. A few counselors waved large flags with neighborhood names emblazoned on them. In addition to volunteer readers from the community, several local and state elected officials joined in. 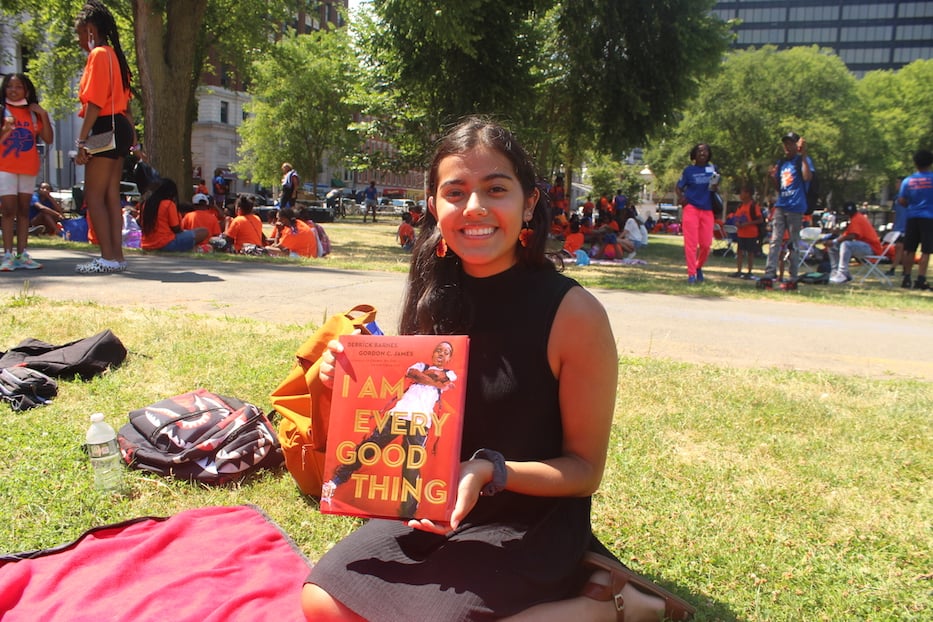 Across from City Hall, Jocelyne Argüelles sat on a plush blanket. The LEAP summer intern and Yale University undergrad prepared to read to a group of nine- and ten-year-old boys from Dwight-Kensington—her first time leading a story time.

Though she’d never read to a group of kids before, she had a couple strategies in mind, she said: ask questions, encourage them to imagine themselves in the scene, and invite them up to each read a page.

Argüelles’ strategies mirrored those of her fellow reader Eugene Scott, a former contracted storyteller at the New Haven Public Schools and doorman at the Omni hotel.

“This book is actually a classroom,” Scott said, gesturing to the picture book The Shaking Bag by Gwendolyn Battle-Lavert. “I turn each page into a learning session.” 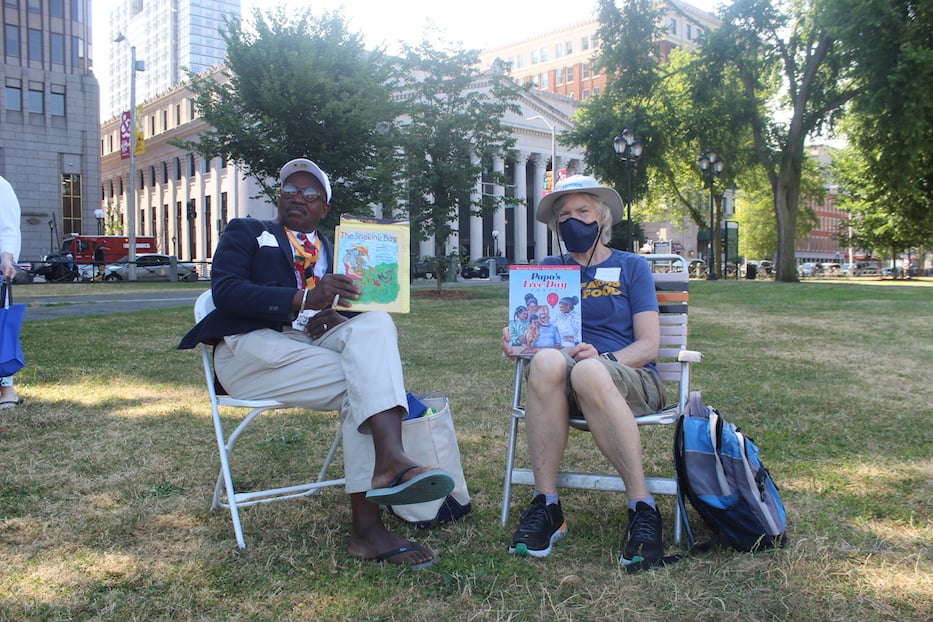 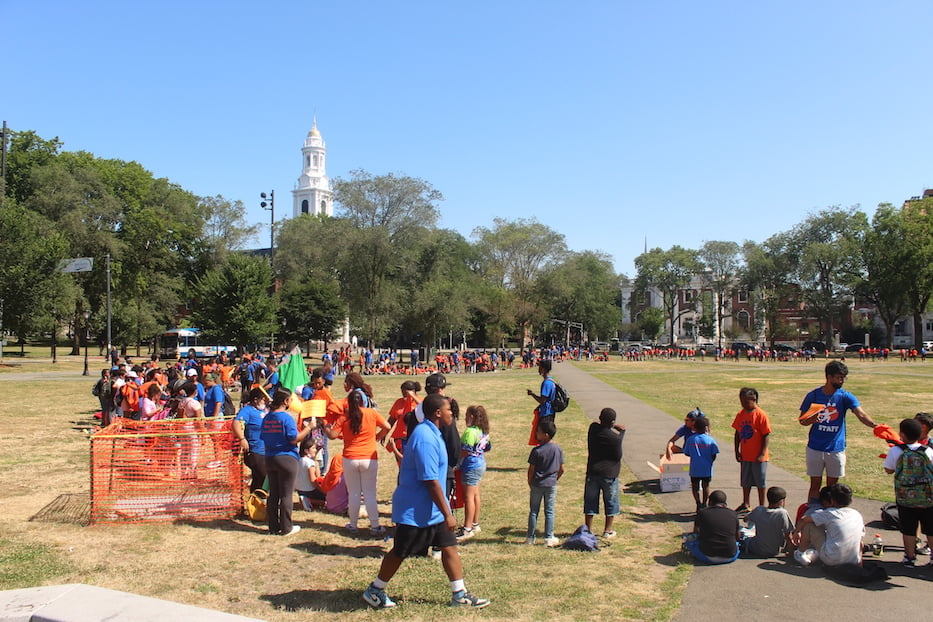 The rate of child poverty in these neighborhoods ranges from 35  to 58 percent, according to LEAP’s website. The camp activities include field trips, sports, cooking, and gardening.

“Some kids come to LEAP and don’t know how to read no matter what age they are,” said Tu'Prece Kelley, a counselor and former camper.

Nearby, Bernhey and her group of LEAPers were deep into Jabari Jumps. In the pages of the picture book, Jabari—a boy similar to the ones gathered around her—is at his local public pool, trying to jump off the high dive for the first time. 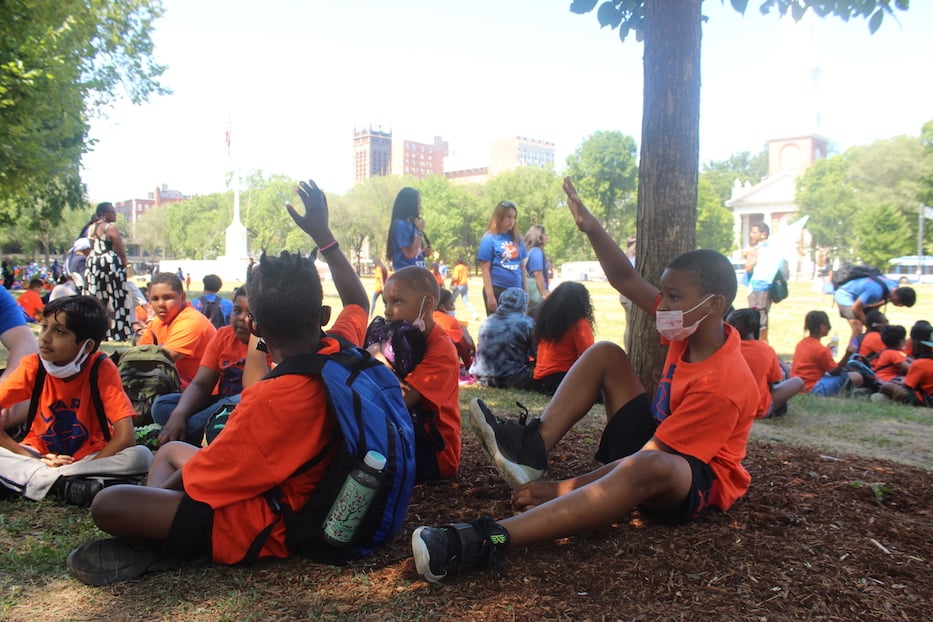 As Jabari walks toward the ladder, he cranes back his neck to view the high dive. The boys bent their necks back, imagining a high dive towering above them.

Jabari began climbing the rungs of the ladder. Benhey and the boys did the same, swinging their arms at their sides.

Jabari neared the edge of the long diving board, curling his toes around the edge and peering into the depths of the deep end. He held his breath, and so did the boys.

As Jabari prepared to jump, one of the boys, Niyam, scrunched up his face, anticipating the leap. 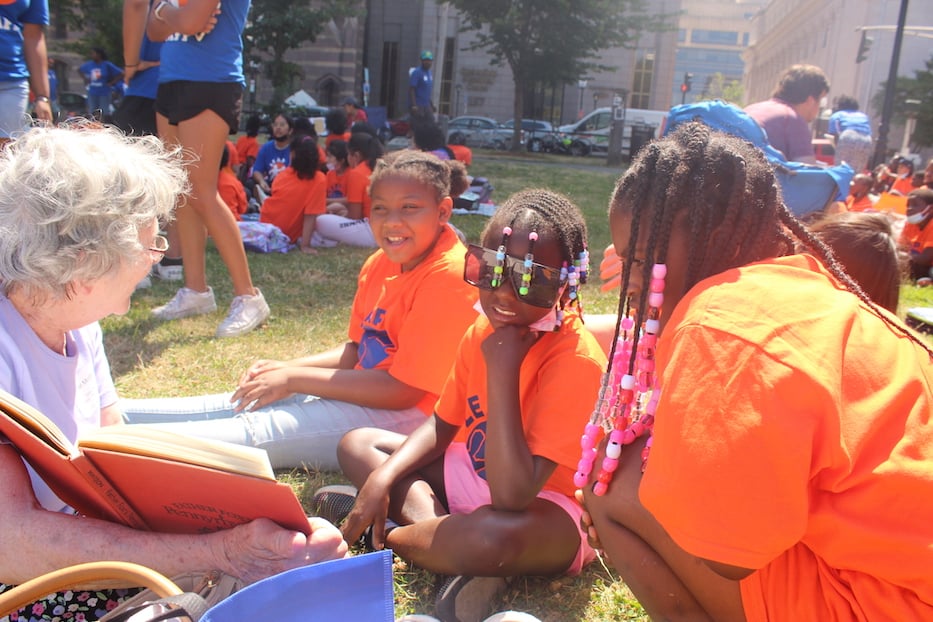 Across the way, four seven- to eight-year-old girls from Fair Haven sat in a tight arc around Pat McGlashan. She knelt before them, eye-level. She turned the pages of her lovingly used copy of Father Fox’s Pennyrhymes by the sisters Clyde and Wendy Watson, which she used to read to her daughters when they were young. (Now they’re in their early 50s).

Each two-page spread consisted of a stylized color illustration and a nursery rhyme. McGlashan flipped to an illustration of an outdoor market, where woodland creatures gathered around vendors selling breads, jams, and lollipops.

She read the accompanying nursery rhyme. The ends of the lines rhymed with each other in AB rhyme scheme. “Gooseberry pie,” rhymed with “buy,” and “penny” rhymed with “any.”

The camper Serenity sat closest, studying the page. She was trying to figure out what differentiated a poem from prose. “The poem is like, the rhyme is like the side, and the poem is that it rhymes at the ends like this,” she said, pointing to the last word of each line.”

“You got it!” McGlashan said.