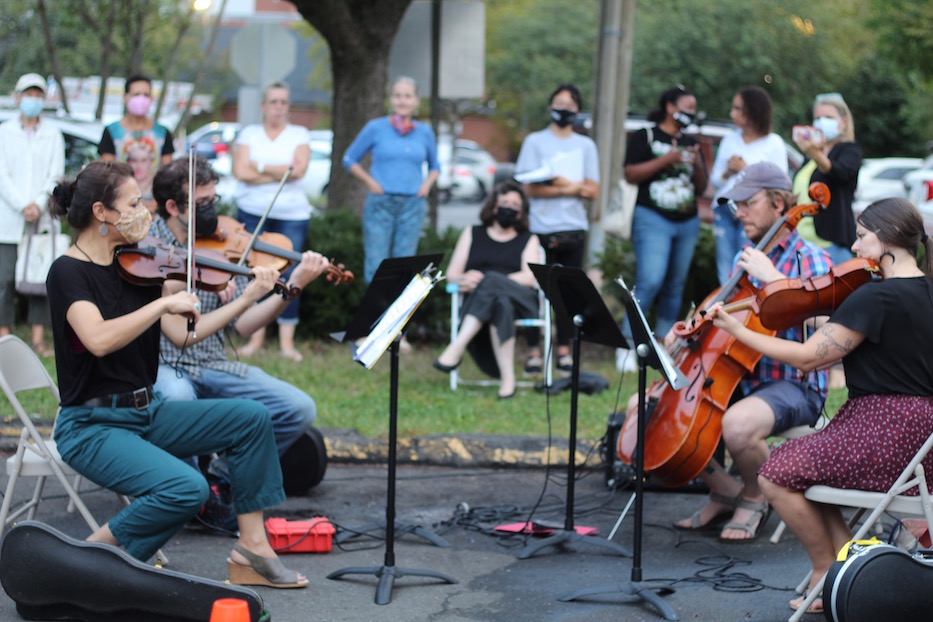 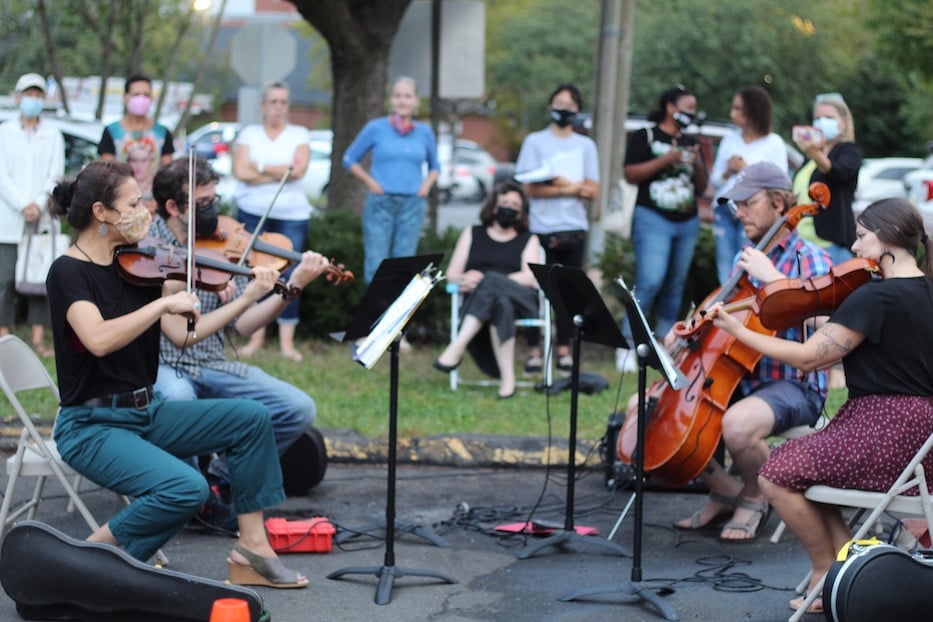 Members of the Haven String Quartet (from left to right: Yaira Matyakubova and Gregory Tomkins on violin, Philip Boulanger on cello and Annalisa Boerner on viola) serenade the parking lot outside Grand Café. Lucy Gellman Photos.

In a parking lot off Grand Avenue, a string quartet’s version of the Mexico City subway was coming to life. Cello rumbled and fumed, and a line two train pulled into the station, packed with riders. Violin joined, and suddenly passengers were tapping their feet impatiently, waiting for the next one to arrive. A viola raised its shrill voice from the corner, and summoned the whirr of turnstiles and ticket machines. A platform all but materialized from an expanse of asphalt.

Wednesday night, the Haven String Quartet brought that sound to the parking lot outside Grand Café, where neighbors have camped out for two hours each night in an effort to deter both petty and violent crime. In a lineup that has featured healing drums, Bomba dancers, accordion players, opera singers and poetry, the quartet added music by Luis Prado, Javier Álvarez, Johann Sebastian Bach, and Los Lobos to the lineup. Roughly two dozen neighbors and supporters cycled through.

Quartet members, all resident musicians at Music Haven, include Philip Boulanger on cello, Yaira Matyakubova and Gregory Tomkins on violin, and Annalisa Boerner on viola. In addition to their set, tables came out so neighborhood kids could prepare decorations for a Sukkah, which celebrates the Jewish holiday of Sukkot.

“It feels to me like it’s changing the feel of this little corner and this parking lot,” said Karen DuBois-Walton, who is both the executive director of the city’s Housing Authority and a resident of East Pearl Street. “I want this to be a corner that’s contributing to the community. I think it’s doing what we want it to do in terms of this particular location, but it’s also bringing neighbors together.”

The occupation began last week, after Sarah Miller, Kica Matos and DuBois-Walton—all community advocates in their own right, and all neighbors in Fair Haven—brainstormed ways to stop a rise in neighborhood violence. The idea is to halt crime by bringing artmaking and community conversation into the space. Some of the bar’s defenders have pushed back, arguing the venue is a comfortable working-class gathering space, particularly for queer and nonwhite patrons, that has been unfairly targeted for outdoor activity it can’t control (read more about it here, here, and here). DuBois-Walton is also leading a petition effort to block the renewal of the cafe’s liquor license in November. 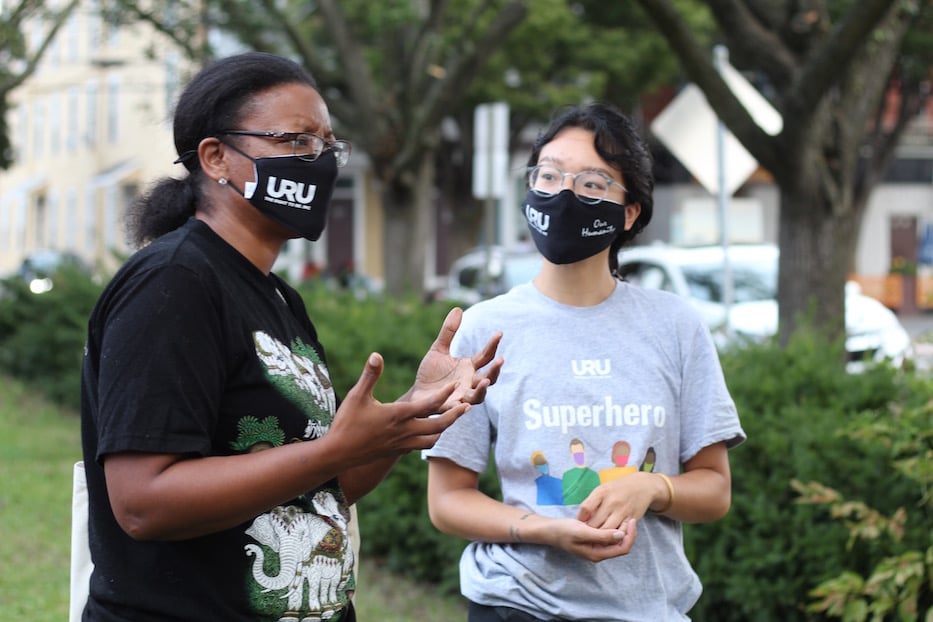 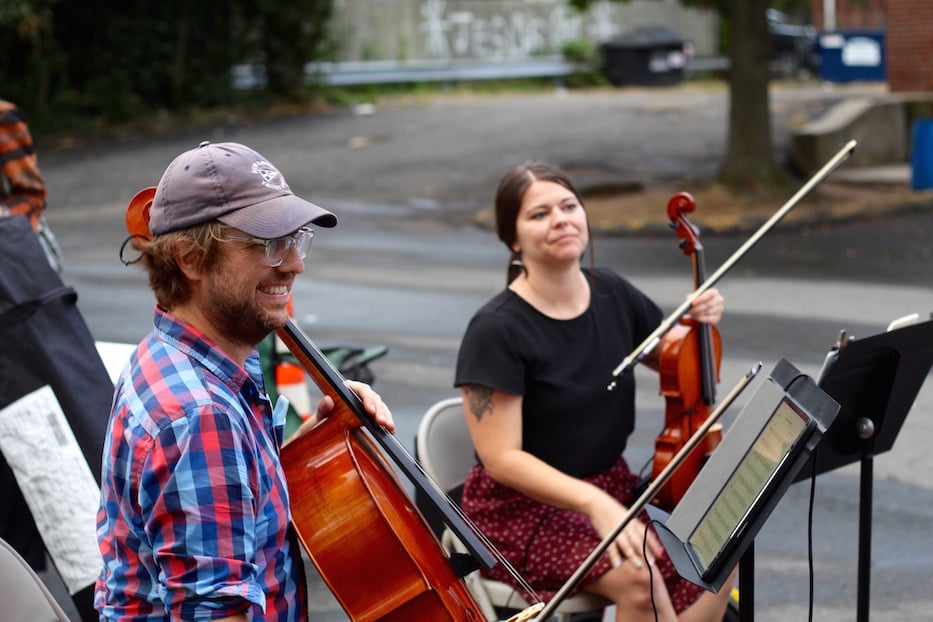 Top: Meredith Benson and Isabella Camasura, who both work for URU: The Right To Be. Bottom: Boulanger before the concert.

Wednesday, a few parking spaces and one lonely, reflective orange traffic cone became a concert stage. Musicians launched into Prado’s Dance Suite, a contemporary take on Spanish and Latin American folk traditions that the composer wrote specifically for Music Haven’s student orchestra. When teachers fell in love with it, Prado created a second arrangement specifically for the quartet. Wednesday, that arrangement arrived just hours before the performance.

As the quartet took up its bows and began to play, the fire of a twilight tango rolled out across the parking lot. Violin rose furiously, flirting with the cello until the two had locked arms, relaxed their arms, and found their footing on the dance floor. Viola cut in, and insisted on one dance. A car wooshed through the parking lot, and became part of the soundtrack. Every so often, musicians glanced from their stands to each other, eyes ablaze.

Some neighbors drifted toward each other and chatted. Others sat alone, eyes wide over their masks as they listened to the back-and-forth of the music. Colleagues Meredith Benson and Isabella Camasura, who both work for URU: The Right To Be, handed out flyers for a vaccine pop-up and community fair coming to Fair Haven Community Health Care in early October.

Fana Hickinson wandered in and found a spot on the grass to stand and listen. A teacher at New Haven Academy, Hickinson doesn’t live in the neighborhood, but has many students who do. She came out to support them, and discovered the quartet as an added bonus. She lauded organizers for finding a way to come together that does not specifically involve law enforcement.

“I think it’s really brilliant in terms of community response,” she said.

So did Kelly Mero, a friend of DuBois-Walton’s who came out to support the initiative and was chatting with neighbors by the end of the quartet’s set. As a mom, grandmother, and longtime resident of the city’s Beaver Hills neighborhood, Mero said that violent crime ripples through an entire city, not just one neighborhood. She worries for the health and safety of her three sons and young grandson. 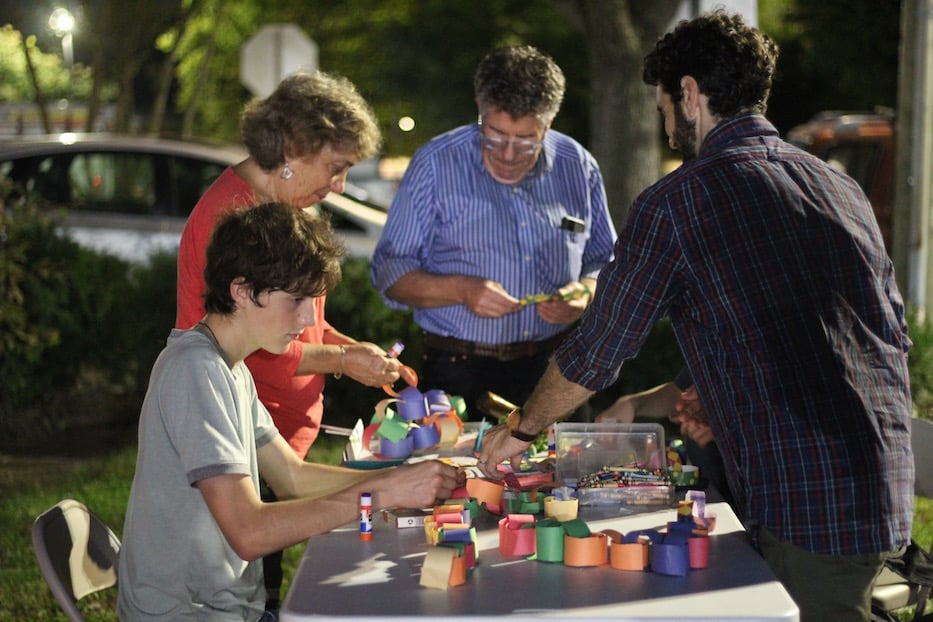 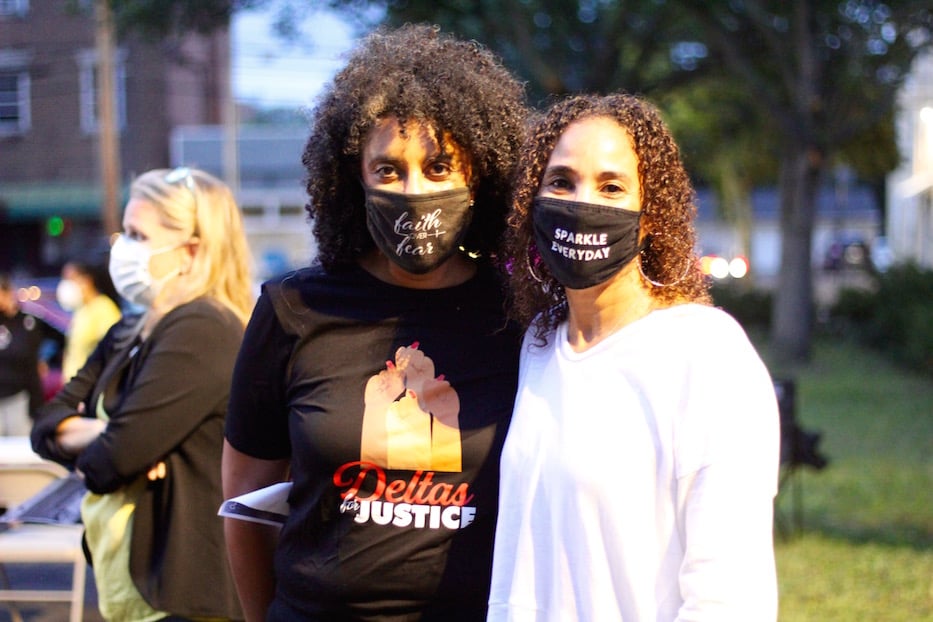 “When something happens in one part of New Haven, it affects all parts of New Haven,” she said. “I think it’s important to send a message of solidarity … I’d love to see this in other parts of the city.”

As the crowd grew, the quartet cycled into Álvarez’ Metro Chabacano, inspired by the eponymous station in Mexico City. In the piece, which Álvarez’ wrote in 1990 for an art installation at that station, the composer uses unrelenting eighth notes to channel the physical movement of a bustling subway stop. In the early 1990s, passengers at Metro Chabacano had a chance to hear it on loop for three months as they ran for their trains, and passed through Mexico City on their way to or from somewhere else.

As the quartet played it at a Fair Haven corner, they returned it to its very public roots. A New Havener biked through the parking lot, taking a video of himself with the quartet in the background. He looped around the lot, doing circles as the quartet sank further into the piece. As his camera rolled, the group conjured a dizzying commuter station hundreds of miles away.

He stuck around as they launched into a selection from Bach’s Brandenburg Concertos, strings unspooling across the parking lot. 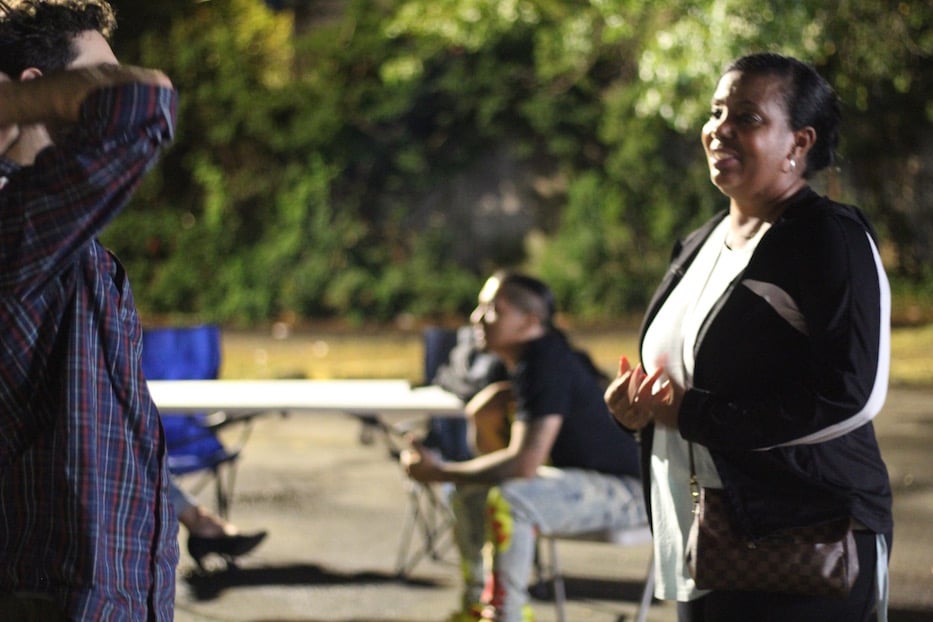 Nearby, Greater New Haven NAACP President Dori Dumas arrived just in time for Los Lobos’ “La Bamba,” the swinging, loping beginning of which was enough to get a few people dancing. Dumas, who had string musicians serenade voters last year during the presidential election, has come to the Grand Café lot several times both by herself and with New Haven’s Outraged Elders, an older group of activists and social justice fighters. She said that she sees it as important for not just the city’s current residents, but its future ones.

“It matters to me that we live in a safe environment,” she said. “We need to take our city back. And we can do it one community at a time.”

While packing up, Boulanger said the performance “felt especially relevant and pertinent for him” as a Fair Haven resident. After moving to the neighborhood several years ago, he and his wife plan to raise their young daughter there. The rise in violence scares him as both a resident and a parent, he said. Playing music in the space feels like something constructive he can do.

The sit-in at 124 East Pearl St. runs from 6-8 p.m. each night between now and the end of the month, Fair Haven organizers have invited community members to come sit in the space, play dominoes and card games, and perform. People can sign up for shifts here.