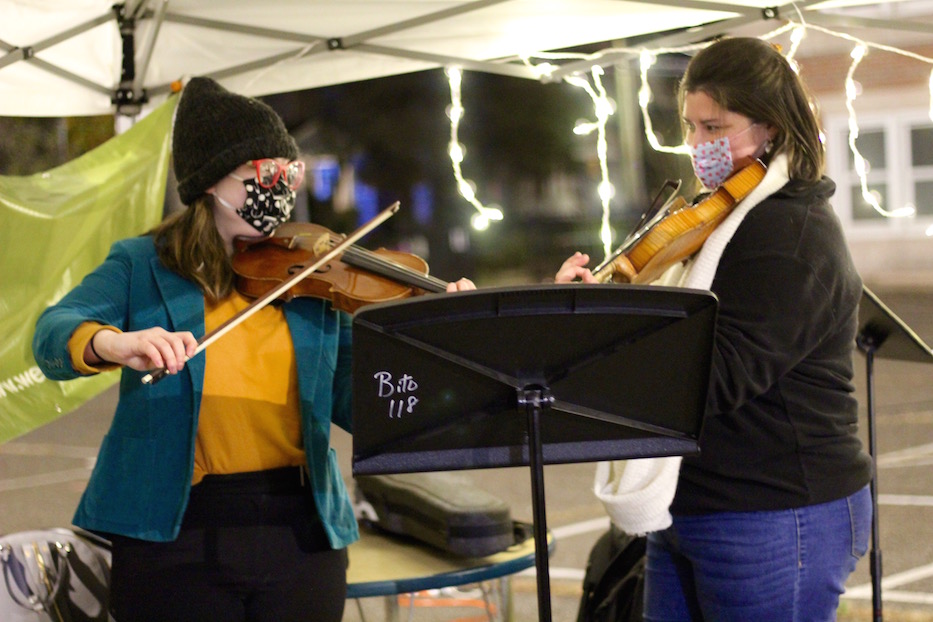 Florrie Marshall and Ariel Horowitz lifted their instruments and prepared to step back in time. A violin called out; a viola answered in the clear, velvet blue of night. The two wound upwards in a sort of dance. The spirit of Joseph Bologne—an eighteenth-century Black composer who fought in the French Revolution—was smiling at the thought of a potential Kamala Harris win.

Tuesday night, the two played out in-person voting at Edgewood School as the 8 p.m. hour inched closer. The concert—one of several throughout the day—was a collaboration between the Yale School of Music and The Greater New Haven NAACP. After starting the day at Wexler-Grant School in the city’s Dixwell neighborhood, musicians headed to Westville to serenade voters at Davis Street School and Edgewood School.

“It’s been really good,” said Dori Dumas, president of the Greater New Haven NAACP. “Good energy. We’re trying to get people engaged and voting. You know, all politics are local—we want to see jobs, the economy, roads. We want to see better service from our elected officials and police accountability. Whatever it takes to keep people excited to come out and vote.”

It joined day-long musical initiatives from the Westville Village Renaissance Alliance (WVRA) and political science professor Khalilah Brown-Dean to “party at the polls” with several DJs and musicians across the city. Last week, someone at the Yale School of Music reached out to Dumas asking if there was a way for students and alumni to get involved. 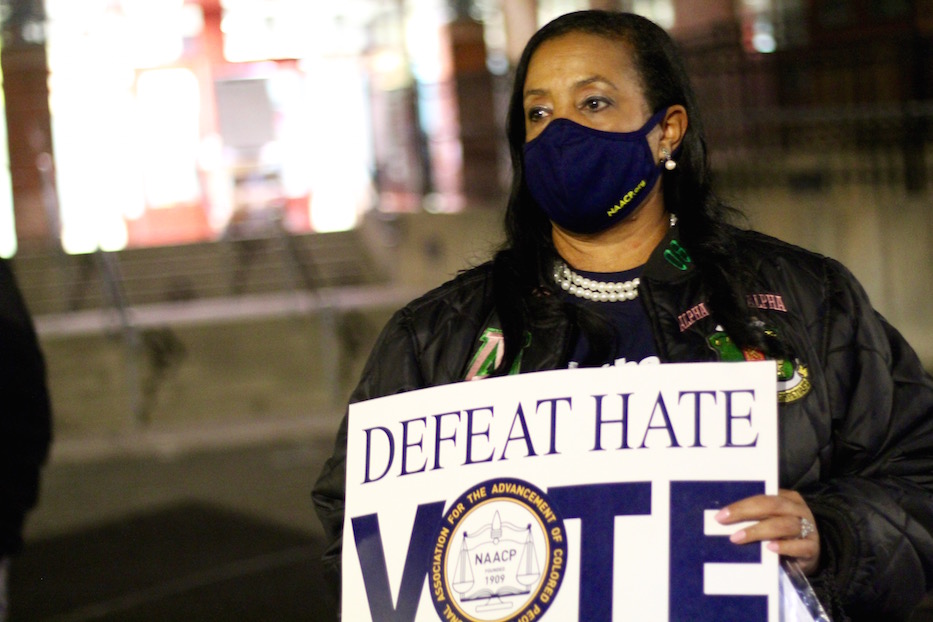 Dumas: "It lifts the spirits."

Dumas, who has long been a champion of the arts, loved the ideas of musicians at polling places. She and other members of the Greater New Haven NAACP already planned to be out at the polls to hand out water bottles, medical-grade masks, snacks and candy to voters waiting in line. For her, the idea of yoking music with voter engagement was an instant yes.

“It lifts spirits,” she said. “I think all day, you’re looking at the news. We’re all in overdrive with it. This lifts people’s spirits and keeps things upbeat and motivated.”

Tuesday morning, hundreds of voters turned out to the school, located in Westville’s high-turnout Ward 25. By Tuesday night, just a few voters trickled out of the building's doors, backlit in its bright fluorescent light. Beneath a tent strung with twinkling white lights, Marshall and Horowitz serenaded them with Franz Wohlfahrt, a nineteenth-century composer from Germany. Dumas clapped and cheered as she held a sign that read “Defeat Hate/VOTE!”

For an hour, the two braved plummeting temperatures to become a stringed conversation, instruments chattering wildly in the crisp air. When violin dipped, viola followed it in an elegant dive that always found a parachute. When the score climbed upward, the two joined forces for a bellow of breath. When they neared the end of their set, they closed out with "Deck The Halls" as if to remind listeners that the winter holidays were still coming.

Between pieces, both pointed to a sort of new intimacy to the performance, set up just feet from listeners without the intervention of a stage. Both are Connecticut voters, and said that they were excited to find an activity that bridged the classical tradition—sometimes stuffy and removed—and civic engagement.

“I think for me, it’s inspiring to see members from the community from all walks of life listening to these artists,” Marshall said. “Music breaks through the tensions and lightens the spirits. For us as artists, it’s hard to feel like we’re making a tangible difference during the election.”

Horowitz added that the duo marked one of the new ways musicians are “dismantling the concert hall” and figuring out how to create music and broaden both the canon and the way classical music is viewed during the COVID-19 pandemic. Before the convert, she and Marshall worked to find composers who directly addressed loss, trauma, and politics in their work.

Between Wohlfahrt and Ignaz Pleyel, the two introduced voter-listeners to Bologne, a colonel in the French Revolution and composer to Paris' short-lived Concert des Amateurs in the last half of the eighteenth century. He died on the lip of the nineteenth century, as revolution continued to roil the country.

“He was a champion fencer and fought in the French Revolution, and despite all of the systemic racism in Europe, he achieved a lot of success during his life,” Horowitz said as she introduced the composer’s “Aria con Variatione.” “So we’re excited to share this.“

In the piece, violin and viola waltz around each other, polite and tentative like old friends who haven’t talked for a while. Their steps are deliberate: a listener can almost imagine the instruments standing apart and inching towards each other. Almost a minute in, violin extends its hand and viola takes it. They move in lock step with each other through the end of the piece.

Beside the tent, artist and WVRA staffer Noé Jimenez listened intently, his wide eyes and spray of hair visible between a mask and puffy hood. Jimenez lives in Westville, where he spent Election Day setting up WVRA concerts that jumped from the Midnight Strangers to Thabisa Rich to Tina Colón Williams. He said he’d tried to keep busy as not to think about the election. When he went to the polls himself, the most important issue on his mind was universal healthcare.

“I feel like I’m in a state of denial, really,” he said. “If it goes the one way that I don’t want it to go, I really don’t have a plan for my life moving forward. I mean, mainly in my identity and as an artist. It means that we’re living in a world where all my worst thoughts about society would seem so much more solidified in that reality. His whole presidency has definitely affected me.”

The classical music helped keep him calm. He recalled watching Dr. Caterwaul's Cadre Of Clairvoyant Claptraps play "Obama's March to the White House," a 2009 piece by the Canote Brothers, at Best Video Film and Cultural Center a few years ago. It had moved him to tears.

“It’s so beautiful,” he said. “It makes me feel a certain nationalistic pride, hearing this kind of music. Even though it’s a bunch of Europeans, for me it is somehow American to me too. Like, in this context with the voting and stuff. I think this is really relaxing. It puts me at ease. We’re all out here, doing the same thing, even if we might differ personally.”