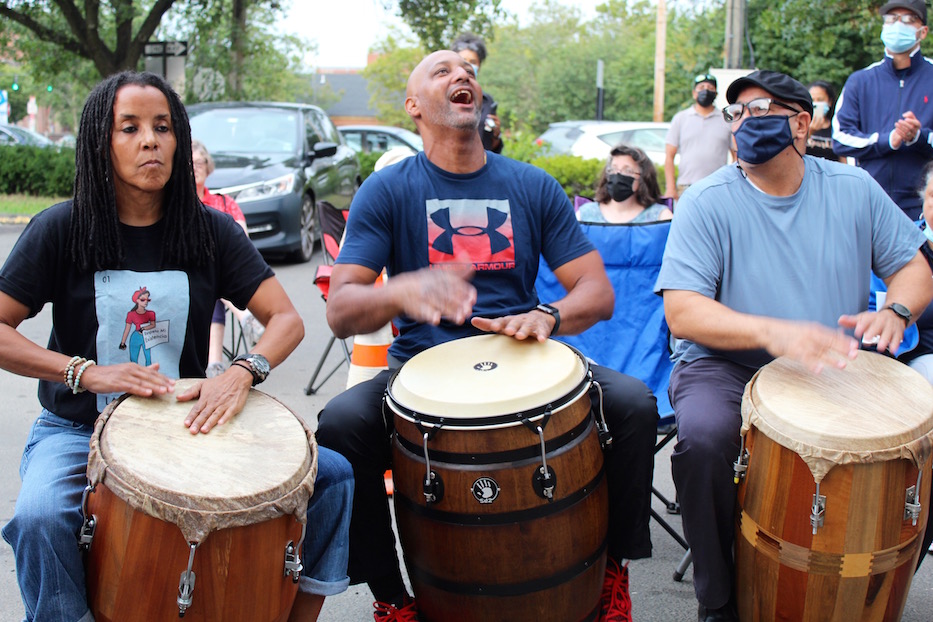 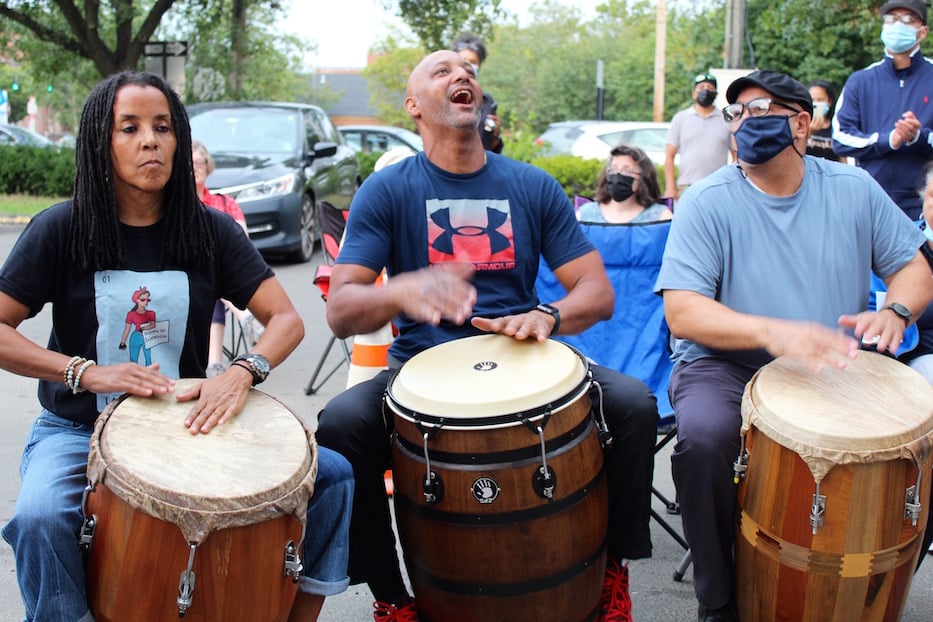 A steady, pulsing drumbeat sailed over an expanse of cracked asphalt, undulating through the air. In the lot, lawn chairs, card tables, pizza boxes and stomping feet sprouted from unoccupied parking spots. Candyce Ciara Blige peered out from the doorway at Grand Café, made her way over, and stepped into the circle.

On Tuesday, patrons from the cafe pushed back, pointing to the poorly lit parking lot and nearby smoke shop as the cause for crime in the area. News articles, police reports, and even restaurant reviews meanwhile have chronicled drug dealing at the spot for years.

“This bar has been a site of illegal activity for years,” said Miller, who lives nearby on Clinton Avenue and is currently running for Ward 14 alder. “The property owner has been incredibly supportive and allowed us to be there. We just want our community back. We just want safety and stability.”

The sit-in is inspired by “21 Days of Peace,” a grassroots effort to stop a rise gun violence in North Minneapolis through the simple act of sitting on street corners. Each night between now and the end of the month, Fair Haven organizers have invited community members to come sit in the space, play dominoes and card games, and perform (people can sign up for shifts and to perform here).  DuBois-Walton is also leading a petition to block the renewal of the cafe’s liquor license in November.

“We want to fill it with things that are beautiful, that make people happy, and that integrate the kind of world that we want to live in,” Miller said.

For her, “the final straw” happened last Tuesday, when she and her family were headed home from a Rosh Hashanah dinner. They were close to their home when they saw flashing lights and commotion in the area. 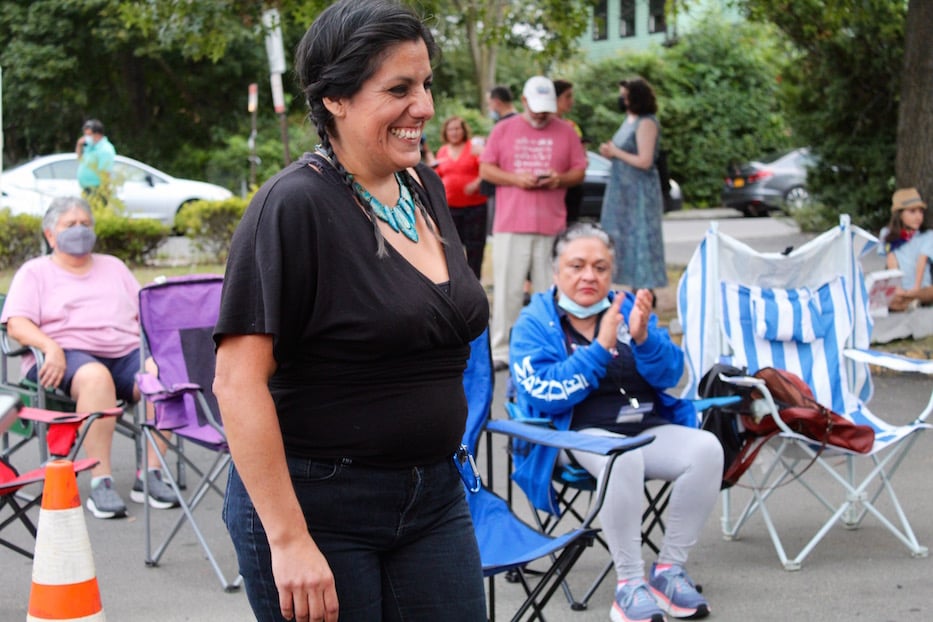 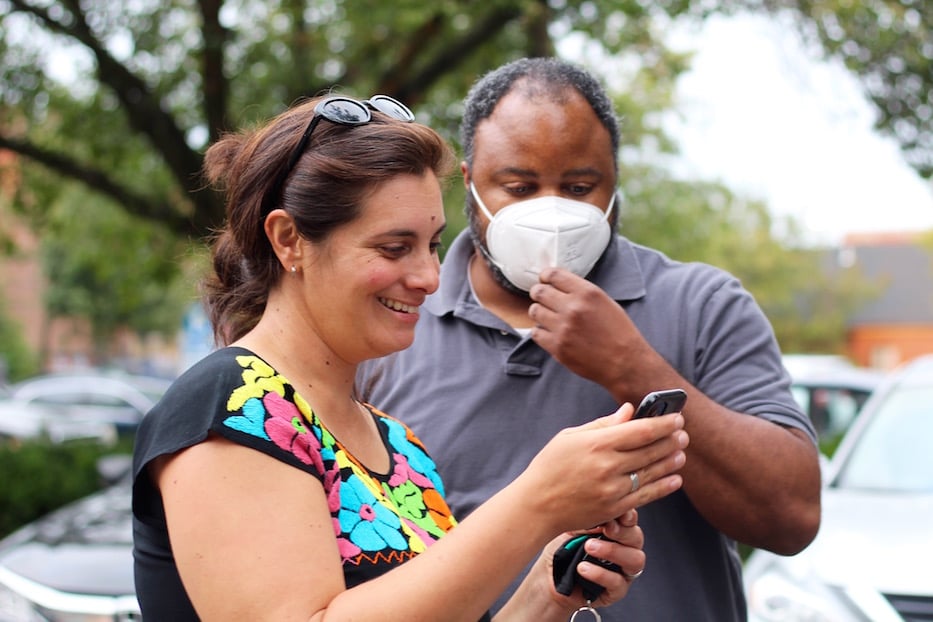 What they were seeing, it would later turn out, was the non-fatal shooting of a 32-year-old West Haven man who is now in critical condition.  On the Monday of that same week, 45-year-old Luis Fernando Gonzalez-Sandoz had been shot and killed nearby on Poplar Street.

In the car, her 10-year-old son Pablo piped up.

“Pablo turns to me and says, ‘Don’t tell me it’s another shooting,’” she recalled. The weight of his words hit her hard. A night later, the city saw its 22nd homicide in nine months. After hosting a community meeting last Thursday and attending another on Friday, she, Matos and DuBois-Walton scheduled the Grand Café sit-in to keep the momentum going. Matos, who has a track record of bringing art with her wherever she goes, said that activating the space with drums, dance and poetry felt natural.

A little after 6 p.m. attendees trickled into the parking lot, milling around an ocean of asphalt where two restaurants, a smoke shop, and the Grand Café all press up against each other in a squat strip. Yards away from the entrance, kids played card games. Neighbors chatted. Matos arrived with a conga drum, and waited for fellow members of Movimiento Cultural Afro-Continental (MCAC). At some point, warm boxes of pizza materialized on the tables. A half-moon of people started to form, with drums clustered at one side.

Initially, a few patrons at the bar objected, yelling from just outside the space. Some lifted handmade signs; others chanted “Grand Café Is Here To Stay!” until music and drums filled the air. India Rivera, who has been a barkeep at the cafe for several years, said that from where he stands, the cafe is not the problem. Its surroundings, including a parking lot with virtually no streetlights, are to blame for recent illicit activity, he said.

“We’ve never had violence inside the bar,” he said. “When the creeps come out and things happen, we have nothing to do with that.” 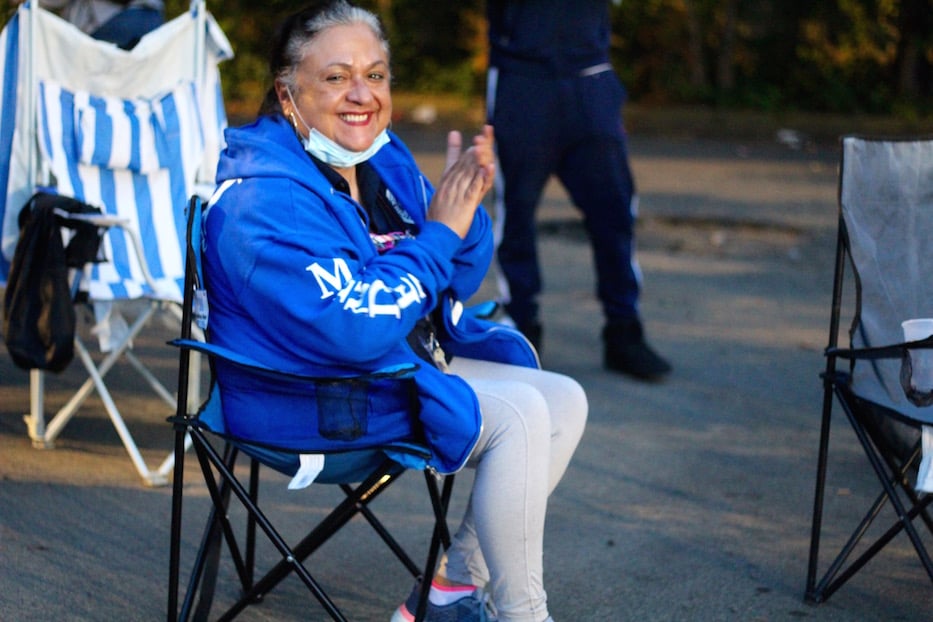 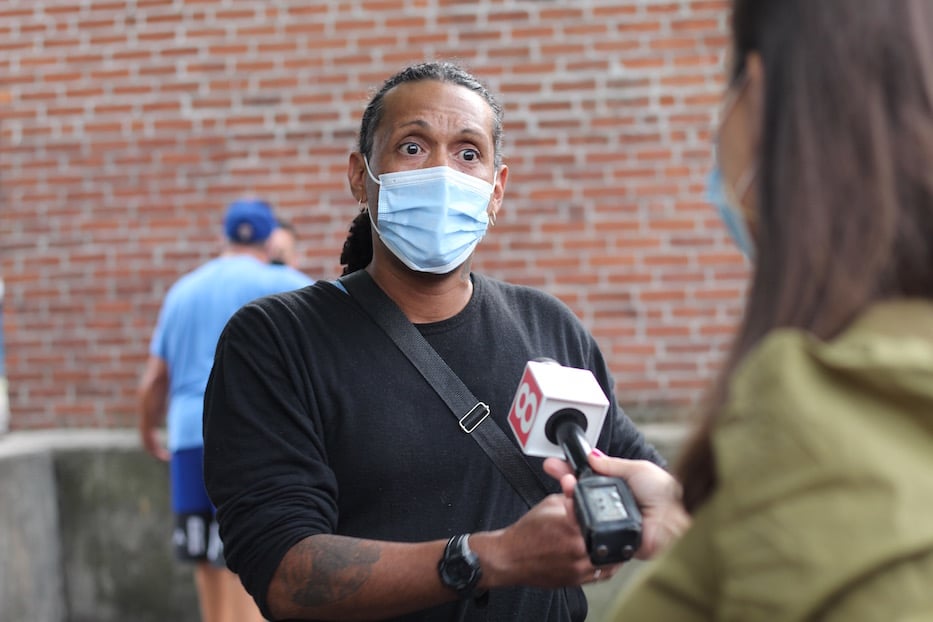 Top: Livable City Initiative (LCI) neighborhood specialist Carmen Mendez, who said "We do this so our kids can have a better future." Bottom: India Rivera, who has been a barkeep at the cafe for several years.

No sooner had he spoken than drums pierced the air. As Matos, Alex Rosado and Kevin Diaz pounded out  a sharp, heartbeat-like rhythm. Blige came over and began to dance in the center of the batey. She listened as Addys Castillo and Sarah Derbala sang, their voices muscled and rising in the night air.

The art form, historically used as a music of resistance and liberation, had become a bridge. Blige is a customer at the cafe. Ward 16 Co-Chair Derbala and Castillo, who heads CityWide Youth Coalition, are members of MCAC who want to see increased public safety around the cafe. All of them danced together.

As a regular at Grand Café, Blige doesn’t want to see the bar close and doesn’t believe it’s to blame for the rise in crime that the neighborhood has seen, she said. But she won’t pass up a chance to move.

Tuesday, she found herself surrounded by artist-alchemists, police abolitionists and reformers alike, Grand Café patrons and cops all listening to the same drumbeat. Before the night was over, even Assistant Chief Karl Jacobson had given the form a try. District Manager Lt. Michael Fumiatti declined the invitation to dance, but stayed for the event.

“I love to dance,” Blige said. “When I be stressed out and people get on my nerves, it soothes my mind.”

Dusk fell and neighbors kept rolling in, some dancing as they walked into the lot and found friends there. A Perkins Street resident who asked to remain anonymous said that she came out after attending the meeting at the ​​Family Academy for Multilingual Exploration last Friday. Last week, she and her daughter were home during the Tuesday night shooting, and could hear the gunshots.

“It’s hitting too close to home,” she said. Her daughter added that she sees too many young people dying. 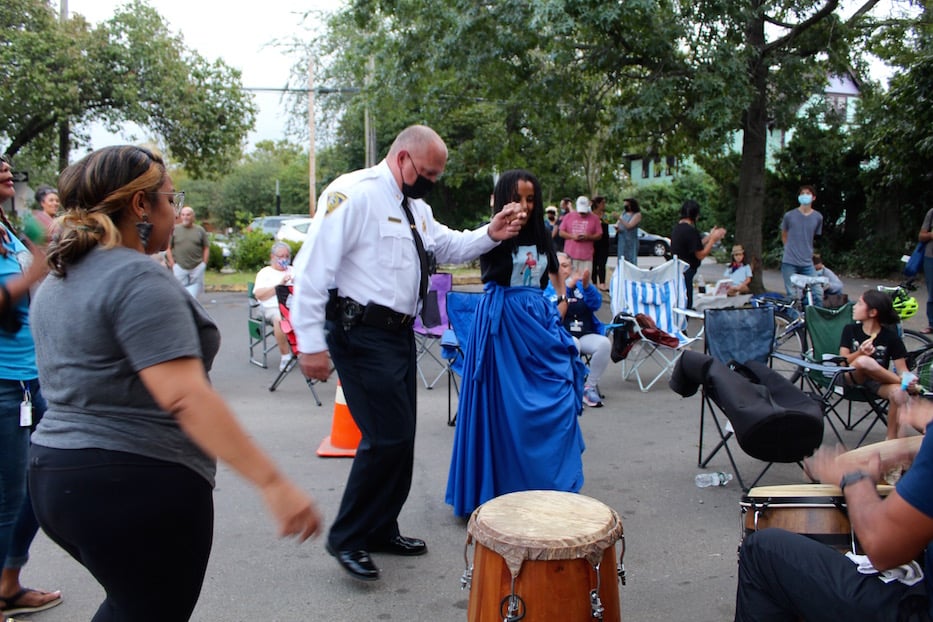 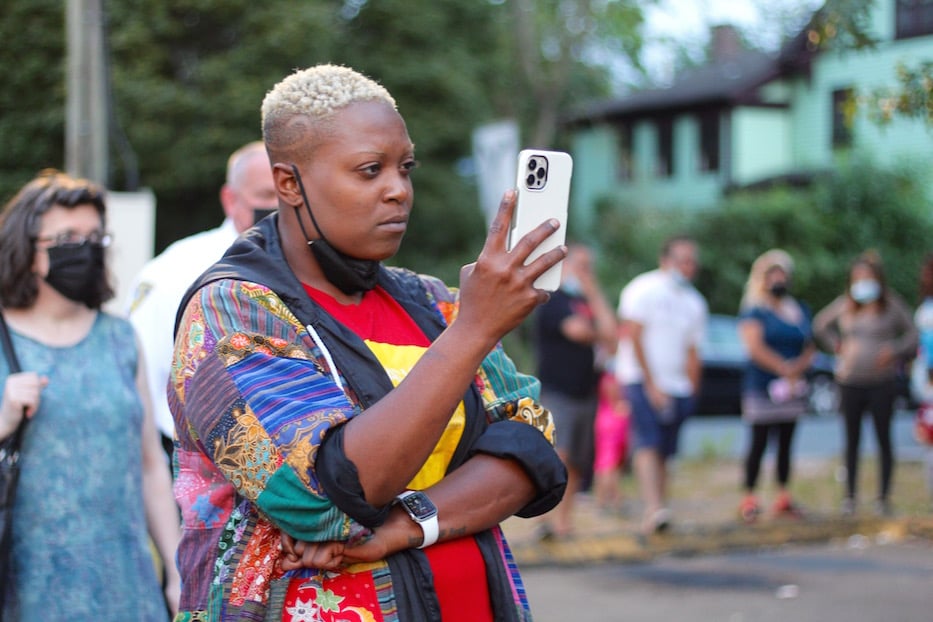 Top: Assistant Chief Karl Jacobson and Kica Matos. Bottom: Ashleigh Huckabey: "We need to celebrate the small joys. We need to come together.”

Ashleigh Huckabey, a Westville resident who runs Empath Vintage, said she came to support both the community and her partner, the poet Sun Queen. For the past several weeks, Huckabey has found herself waking up at two or three in the morning, unable to sleep as sirens fill the night air. When she’s unable to get back to sleep, she said, she prays for the safety of the people inside those ambulances and for their families.

“Being in community is healing,” she said. “To have arts and healing together, that’s joy. We’re all trying. We need to celebrate the small joys. We need to come together.”

“At the end of the day, it’s about the City of New Haven,” chimed in Queen, who spoke at length about her hope that New Haven can reimagine public safety beyond policing in an interview with the Arts Paper last week. 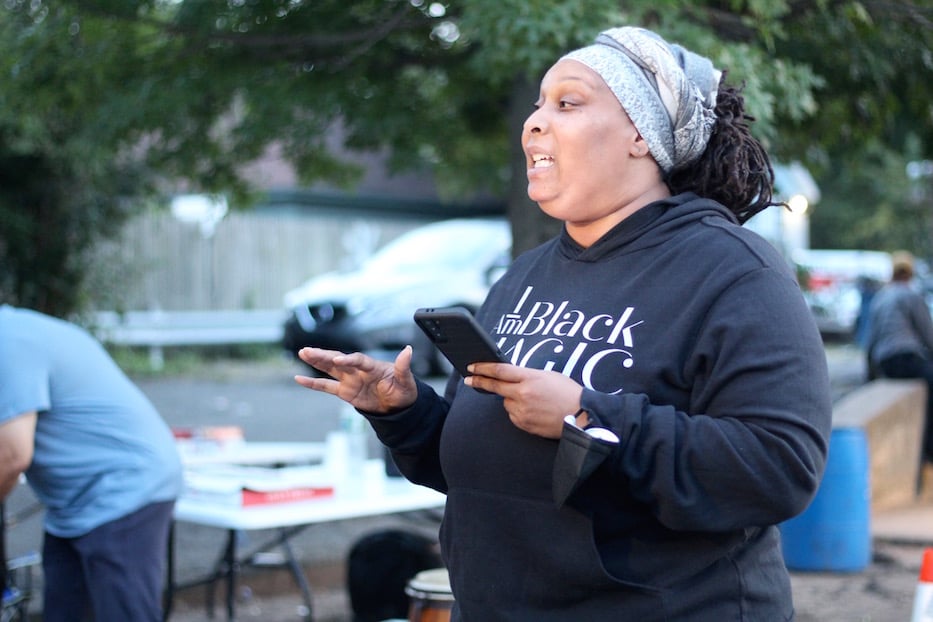 Queen later read her poem “What’s Going On,” based on the very words she asks herself when she hears about another shooting in the city. By the end of August, New Haven Police reported that there were 78 nonfatal shootings in New Haven—a number that has since crept past 80. There have been 22 fatal shootings, with victims as young as 14.

In the piece, she ties her own response to police brutality to a need for city residents to come together as a cohesive unit. She calls for well-resourced neighborhoods, fully funded schools, true wealth redistribution and families that don’t have to stretch every dollar. It is blazingly raw at times, which she said was part of the point.

“We’re not moving in the right direction,” she read. “It’s not about the applause you receive in the street for carrying the heat/So put down the guns/We actin’ like we don’t really care about breathing/Or making it past the next 24 hours.” 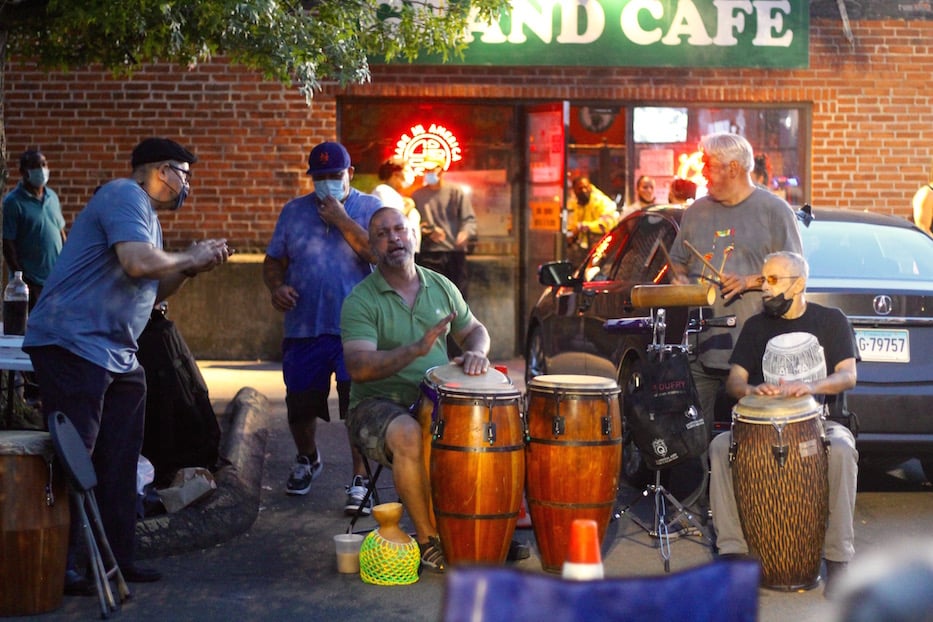 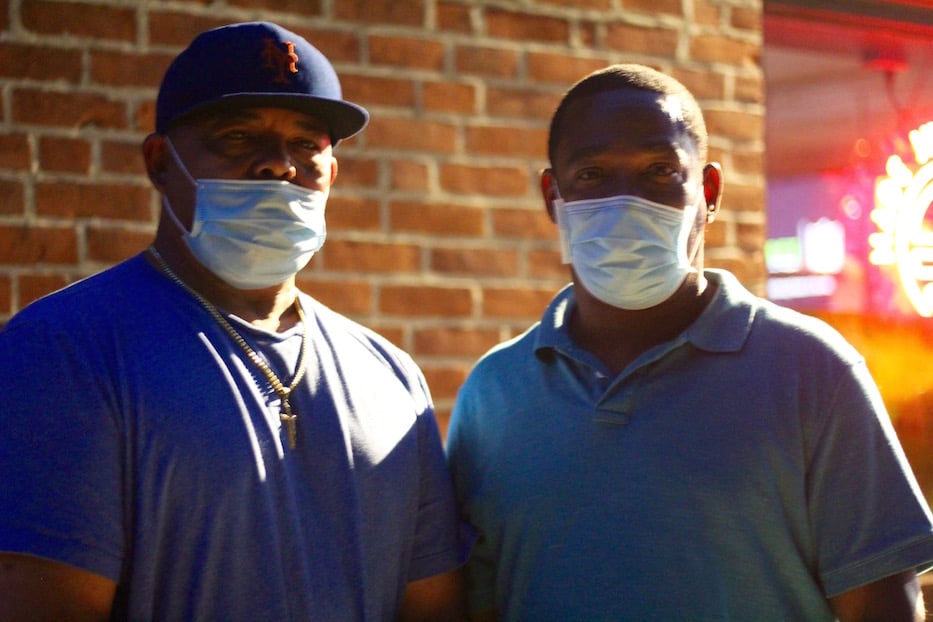 As drummers from Bregamos Community Theater blessed the space with a Yoruba prayer to Eleguá, Grand Café owner José Rivera and patron Julien Welch watched them from afar (as reported by the New Haven Independent, the bar’s liquor license indicates the owner’s name is Cruz Vazquez). Rivera said he’s willing to work with community members to make the lot feel safer—but he doesn’t agree with the method. The hollow, bright clicking of claves wafted into the air as he spoke.

“I like it okay,” Rivera said of the music. “But they’re doing a protest on the wrong part. Whatever happens outside the bar, that’s not us. The bar is not the problem.”

The sit-in at 124 East Pearl St. runs from 6-9 p.m. each night between now and the end of the month, Fair Haven organizers have invited community members to come sit in the space, play dominoes and card games, and perform. People can sign up for shifts here.