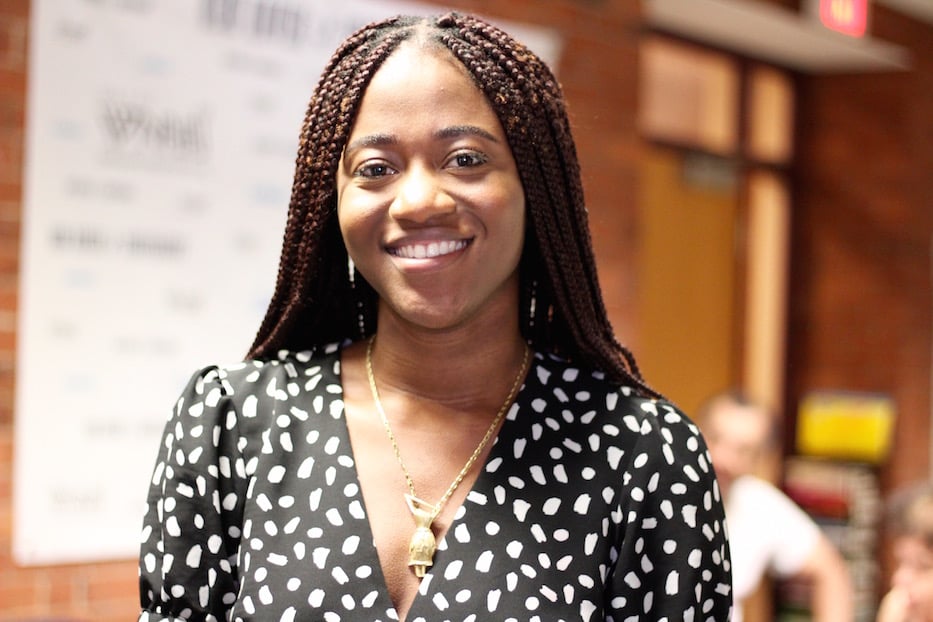 Lights up. Camera on. In one scene, Angel Dahfay is interviewing skateboarder and chef Steve Roberts as he works his way through kitchen equipment, preparing a bowl of crispy tempura shrimp and grits. The camera shifts. Now she's alone in a test kitchen, blending egg white, powdered sugar and almond flour for a tidy set of lavender macarons. Scene change. She's sitting down with musician Trey Moore to talk about his fantasy dessert, before trying to bake it into being.

That's the idea behind SweetxSound, a new online platform from Dahfay that bridges food, home cooking, baking experiments, and local music in a series of videos and interviews. After thinking about the project for several months, Dahfay launched the series in November 2018, adding new videos, tutorials, and interviews every few weeks. All of the content is available on YouTube, Facebook, and Instagram.

"Think of it as the umbrella or the network," she said on a recent episode of WNHH Community Radio's "Kitchen Sync" program. "And under that network, I come up with different series where I try to connect food and music in some way."

Currently, SweetxSound consists of three moving parts. There's a dessert-based test kitchen, video cooking demonstrations with professional and home chefs, and a series called "Sweet Talk," during which Dahfay interviews local musicians, bakes with them, and hosts live performances of their work. She said the idea came to her last year during a lunch hour, while she was talking to a colleague about her love for local music, matched only by her love for baking.

The platform, which Dahfay said she is constantly growing, launched from there. In her first-ever full episode, she rented a local AirBnB in downtown New Haven and invited on chef Steve Roberts, who mixed soul food and Japanese cuisine in his tempura shrimp and grits. As he guided her through an on-camera tutorial, she said she realized that it was exactly what she wanted the project to be.

"I had the first bite, and I was like, 'this is amazing,'" she said. "It was so interesting just unfolding that, seeing him come up with something, and then seeing him put it together for an audience, for people to see."

Then there was the baking and music component, which she has tweaked and tinkered with since last year. Born and raised in a Liberian household in New Haven, Dahfay learned to bake as a teenager, while attending a technical high school. Originally, she said that she thought of baking the desserts herself, and then having musicians come by to talk, perform, and eat the food.

Then she realized that it would be more fun—and potentially both elegant and catastrophic—to ask musicians what dessert they had always wanted to bake, and then bake it with them. It's tied to her love for baking shows large and small, including The Great British Baking Show, Vice's YouTube channel Munchies, and Bon Appétit's online series of tutorials and demos.

As she expands SweetxSound this year, she is planning to add new segments that blend music and food. In part, that's because she wants her viewers to be both entertained and emboldened to try new recipes on their own. If they fail, at least they'll have tried something new, she suggested.

"I don't have a background in cooking, which makes this more fun for me," she said. "I'm kind of just learning as I go. Literally, it's a learning process. People see the things I create and think that I know what I'm doing, but I really don't."

To listen to the entire episode of Kitchen Sync, click on or download the audio above. This piece is made possible through The Arts Paper's content sharing partnership with WNHH Community Radio and its longstanding news affiliate, the New Haven Independent.