The Gospel Of Black Voters Comes To Goffe Street 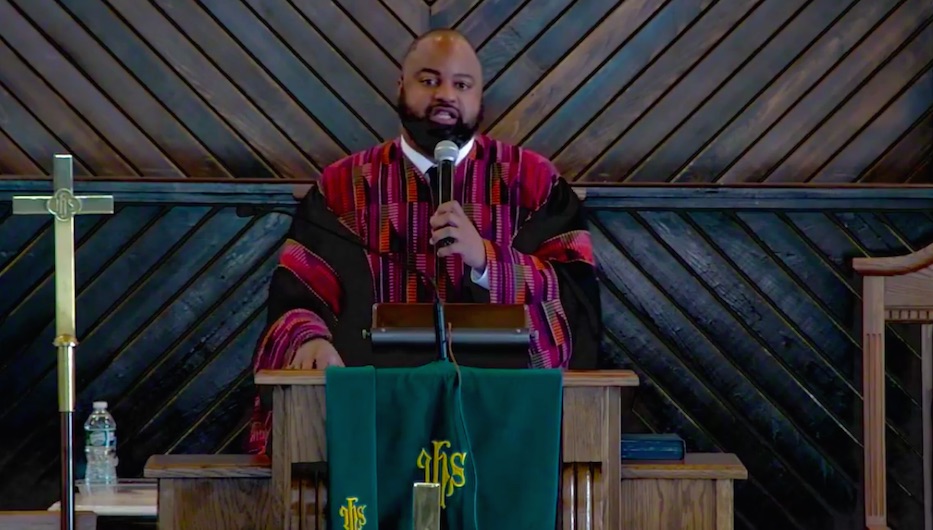 Sunday morning, Cousin threaded faith, civic engagement, and electoral politics in “Stay Woke,” his weekly sermon at Bethel AME Church on Goffe Street. Due to the COVID-19 pandemic, Cousin has kept services virtual until further notice. Only he and a few church members meet in the sanctuary, from which services are streamed onto Facebook.

“God is saying during these difficult times, stay alert,” he said Sunday, after a refrain of Leonard Shumpert’s “I’m Gonna Make It” from a pianist and small, mostly-masked choir in matching red blazers and slacks. “Be on your guard. And stand watch.”

Sunday, the sermon began in two places. In one, Cousin looked to the gospel of Matthew 26:40, in which Jesus has gone to pray and returns to find his disciples sleeping. In the passage, Jesus asks Peter why he was unable to stay awake and keep watch. There isn’t contempt in the question, so much as a wounding, a loss of trust that is not unearned.

Sunday, the words flashed on the screen, twinkling against a gold background. At the pulpit, Cousin read them aloud, his voice ringing through the mostly-empty sanctuary. The few choir members still present clapped along from the pews. Someone let out a murmur of agreement close to the livestream.

In the other, Cousin was in his living room Saturday morning when he heard his wife cheering and saw her running around the house with her family members pulled up on Facetime. He quickly learned the source of her joy: Pennsylvania had been called for Democratic candidates Joe Biden and Kamala Harris, pushing them over the 270 electoral votes they needed to win the presidency. Donald Trump’s four years in office were officially coming to an end.

Cousin was elated. He called his grandfather and his uncles to celebrate the news. Over the phone, they talked about what it meant to have Trump out of the White House. They marveled at the reality of a president committed to stemming the spread of COVID-19, and a vice president-elect to whom Black and South Asian women and girls can look up and see themselves reflected.

It made him think about the uneasiness that had crept into his week, starting with a whisper of doubt on Tuesday night and spilling into Wednesday, then Thursday, then Friday. Even as results rolled in, Cousin recalled holding his breath. The more he studied electoral maps, the more buoyed he felt by the fact that cities filled with Black voters had not yet been called.

In Michigan’s Wayne county, it was Detroit. In Georgia’s Fulton County, it was Atlanta. In Pennsylvania, the country was still waiting to hear from Philadelphia, where millions of voters cast their ballots early and by absentee vote. At some point, he stopped listening to political pundits that were trying to tease out regional differences or pick apart identity politics.

“I’m laughing at myself, saying, ‘I don’t know why you’re trying to complicate things,’” he recalled. “It’s very simple. The Black vote turned out this time. And that’s the reason why we got a new president and a new vice president. Y’all missed it.”

He shouted out Stacey Abrams for her own ability to “stay woke” after her narrow loss to Georgia governor Brian Kemp two years ago, in an election that has since been scrutinized as a case study in voter suppression. Instead of falling asleep, Cousin said, Abrams fought with everything she had to ensure a fair election for Black voters. She turned the state blue for the first time in 28 years, since Bill Clinton won by less than one percent in 1992.

He shouted out his mother, a resident of Bucks County, Penn. who started door-knocking, canvassing, and making last-minute phone calls to her neighbors, coworkers, and county residents in the final days before the election. He praised her fearlessness in speaking out against Donald Trump, working to sway votes as the clock ticked down to Tuesday.

Still, he said, he is haunted by the fact that 71 million Americans voted for Trump. He recalled his wife turning off the television Tuesday night, unable to watch as hundreds of thousands of votes put Trump initially ahead. He urged congregants to stay alert, hold fast to faith, and hope for a kinder, more socially just world.