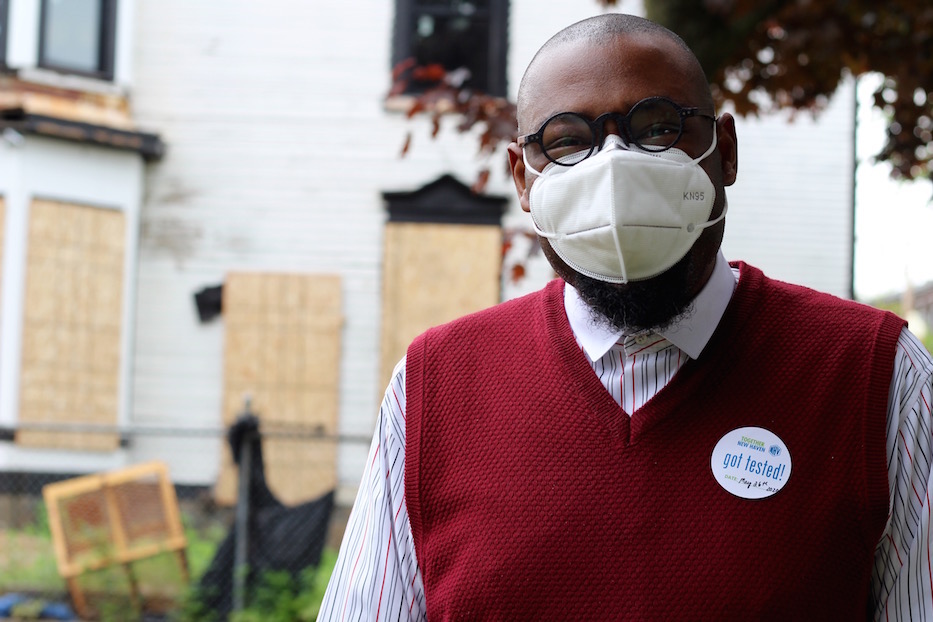 If you haven’t gotten tested for COVID-19—even if you don’t feel ill—it’s time to stop waiting. Knowing your status is your earthly duty. It’s your spiritual one, too.

Over a dozen clergy members came together to preach that message Tuesday morning, at the Day Street testing site in the city’s Dwight neighborhood. For nearly three hours, an interfaith group lined up at the corner of Chapel and Day Streets, in what used to be a basketball court. All of them received COVID-19 testing; several also opted for bloodwork to test for antibodies. 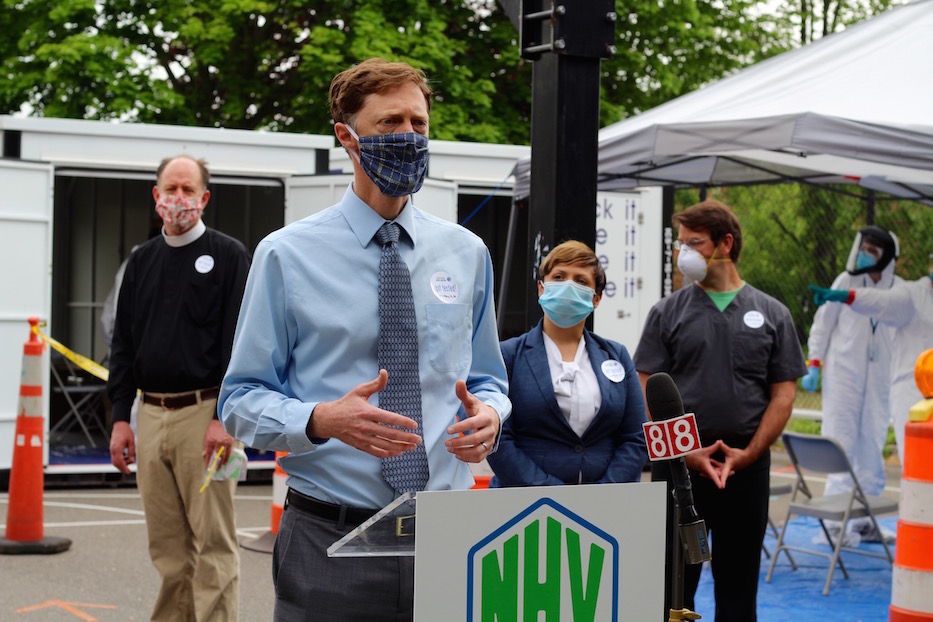 The initiative is part of the city’s effort to ramp up COVID-19 awareness and testing, particularly for those who may be asymptomatic and for Black and Latinx community members who have been hit harder by the virus than their white counterparts. Earlier this month, the city rolled out its “Mask Up” campaign to increase mask wearing in public. In the first week of May, city officials also worked with artist Daniel Pizarro to send out COVID-19 public service announcements in English and Spanish.

Mayor Justin Elicker, who was tested for the virus earlier this month at the CVS rapid testing site on Sargent Drive, thanked faith leaders for “stepping up” to spread the gospel of universal testing. He praised them for closing their churches, moving worship services online, working to distribute food in soup kitchens and across coordinated access networks, and responding to parishioners in need via phone call, Facetime, Zoom and Facebook Live.

"When they don't have the kind of traditional ways that we mourn our loved ones, you are there as the backbone to ensure that they feel the kind of support that they need to get through that very very challenging time,” he said. “I want to thank you for your leadership. And today, we have taken that one step further." 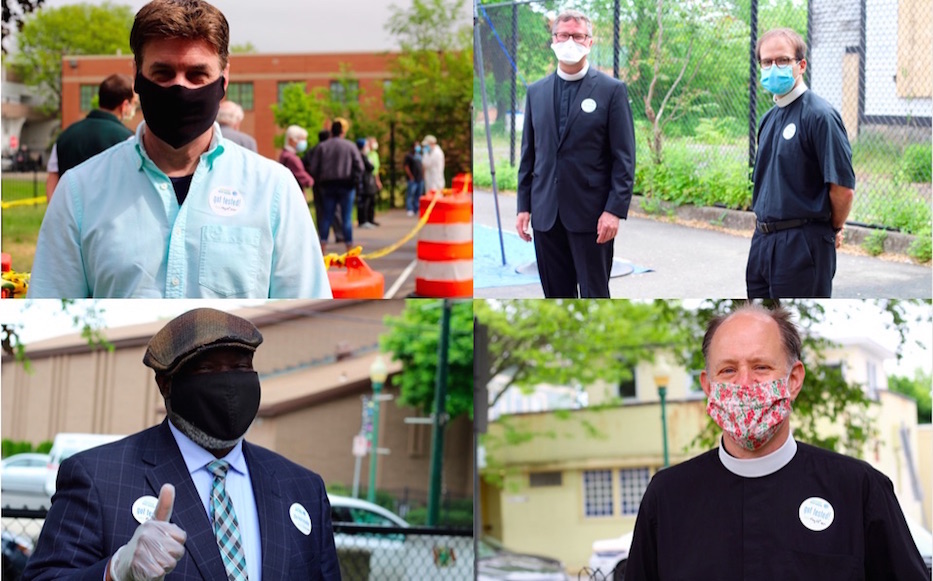 It’s a message that has almost holy resonance at the corner of Chapel and Day, an intersection once abuzz with action. Friends used to shoot hoops on a cracked but well-loved asphalt court. Students from Amistad Academy filled a building just across a grassy field. Sunday mornings were joyful and cacophonous at Immanuel Baptist Church across the street.

Now, the nets have been removed to stop potential games. Amistad Academy is teaching virtually for the foreseeable future, as are all the city’s schools. Immanuel Baptist closed its doors proactively in early March, although it still runs an emergency soup kitchen. Tents and new temporary structures for antibody testing have gone up in the lot, surrounded by yellow caution tape and the half-demolished Walter Camp house.

Dotted with starched white collars, tight skullcaps, long robes and masks in every color and pattern Tuesday, the lot felt more like an open air chapel. Where friends once played basketball, faith leaders formed a careful line, standing on X shapes that had been laid down in red tape and spaced six feet apart. Over and over again, they agreed: getting tested was the latest chapter in a spiritual world upended by COVID-19. 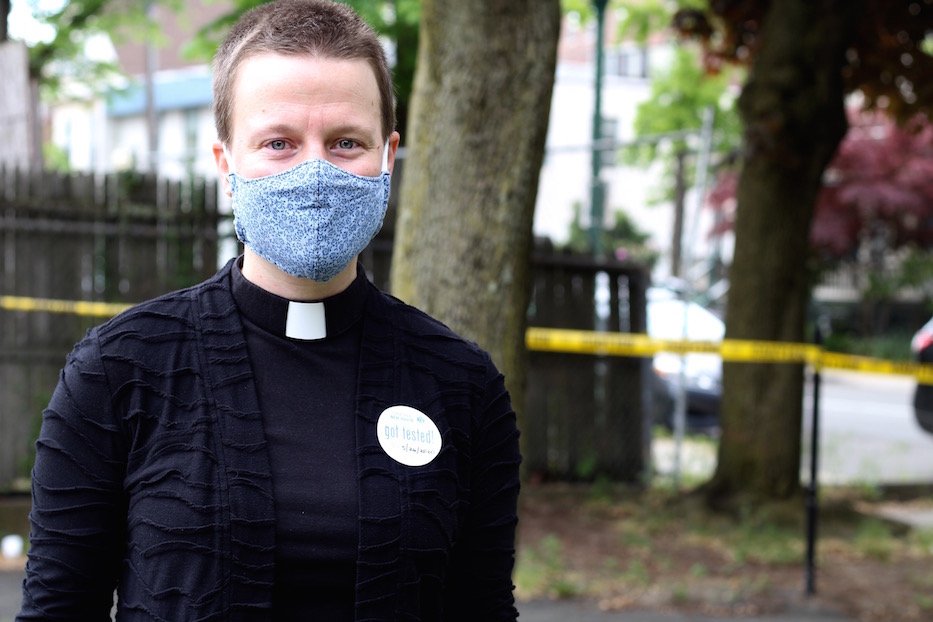 “For me, one of the central tenets of our faith is to love our neighbors as ourselves,” said Rev. Jocelyn Gardner-Spencer, senior pastor at United Church on the Green. “This is about practicing love for our neighbors.”

For Gardner-Spencer, living that message has tested how she practices, from online services to isolating with her partner and young child. After the church closed its doors in early March, one of its members became one of New Haven’s first documented COVID-19 cases. He was later one of its first fatalities.

After he fell ill, his wife also contracted the virus. Gardner-Spencer held his memorial service over Zoom. While parts of it moved her—family, friends, and congregants all attended, from places near and far alike—it was nothing like the grief rituals she’d practiced with congregants before the pandemic, when gathering at a graveside wasn’t considered a high-risk activity.

Months later, her faith in social distancing hasn’t wavered. On Sunday, she preached against President Donald Trump’s push to reopen houses of worship in her weekly sermon. With its physical doors closed, the church has been raising funds for the Downtown Evening Soup Kitchen (DESK), working with the Coordinated Food Assistance Network (CFAN), and sharing information on the city’s warmline run by Clifford Beers Clinic. She said she does not expect to reopen the physical building for months. 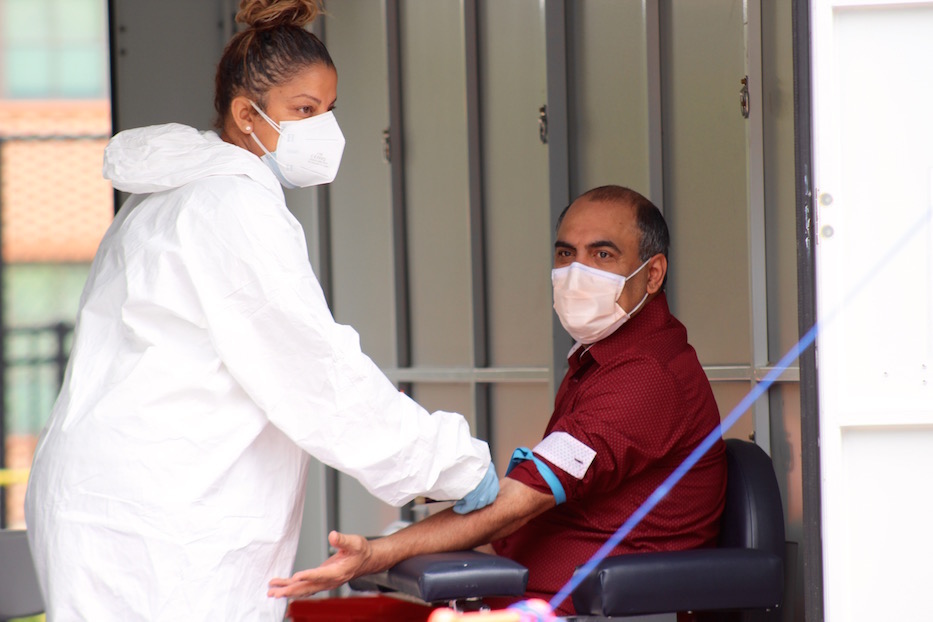 That message—that faith in science can be part of one’s faith in God—echoed across the lot. Pastor Abraham Hernandez, who serves Second Star of David Christian Church and is vice president of the National Hispanic Christian Leadership Conference, noted the importance of serving by example to both parishioners and other faith leaders in the area.

He recalled learning about two young parents, both members of the congregation, who lost multiple part-time jobs overnight. He’s seen food insecurity skyrocket. Testing, he suggested, is the only way to know if the virus is truly on the decline. 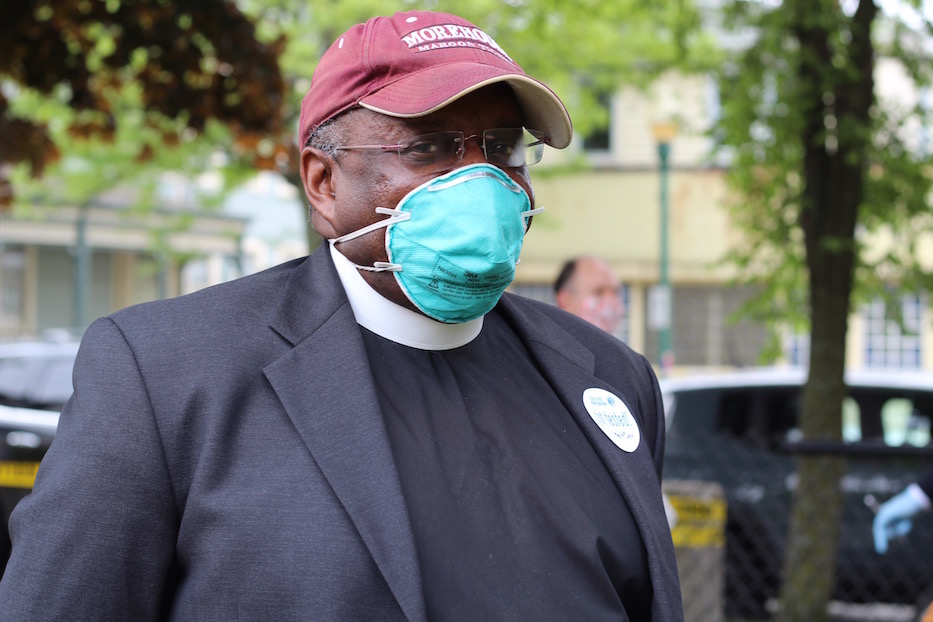 Rev. William Mathis, pastor at Springs of Life giving Water Church in the Hill, said that nothing has stopped—it just looks different now. Since the beginning of the COVID-19 pandemic, he has presided over one funeral and tried to provide spiritual guidance to members who have fallen ill. When he takes to Zoom each week to preach, he said he includes the importance of testing in his words.

“We always considered ourselves essential and open,” he said. “We’re all doing the work online, via telephone, Zoom, and Facebook now. I think it challenges us to deepen our understanding of what it means to be disciples of Christ—not in flesh and in blood, but in spirit.”

Rev. Harlon Dalton, who is known for fiery, justice-geared sermons and jazz brunches at The Episcopal Church of St. Paul & St. James, said he’d come out to show “how easy it is” to get tested (the city has said that it has capacity for universal testing). Since March, he has been doing online Sunday worship and two virtual compline services in the evenings. 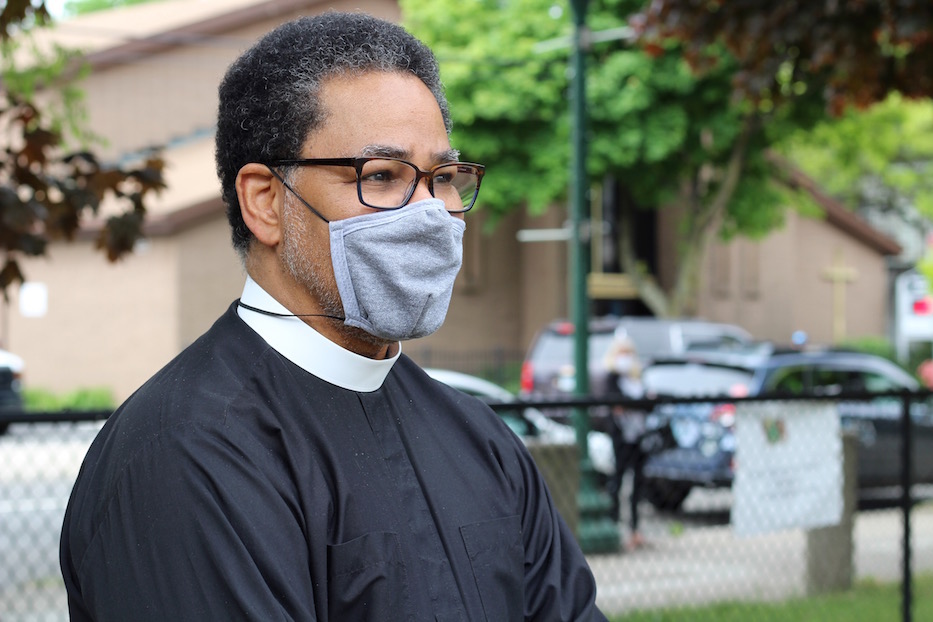 The church still holds its addiction recovery support groups “at a social distance,” for which Dalton said he sees no virtual substitute.

When he isn’t preaching—the compline services center him, he said—he is helping the church do food distribution work with Loaves & Fishes, which has seen food-based need grow by 300 percent in weeks.

Imam Omar Bajwa, the Muslim chaplain at Yale University, described public health messaging as one more duty to which he is holding himself as a spiritual leader. As a member of Masjid-al-Islam, he spent the holy month of Ramadan distributing to-go Iftar meals to both members of the masjid and the surrounding Dwight neighborhood.

Normally, Bajwa breaks his fast with hundreds of others who are also observing Ramadan. On Eid, which took place last Sunday, Masjid-Al-Islam usually holds a huge barbeque in which members gather, break bread, and give thanks to a higher power. 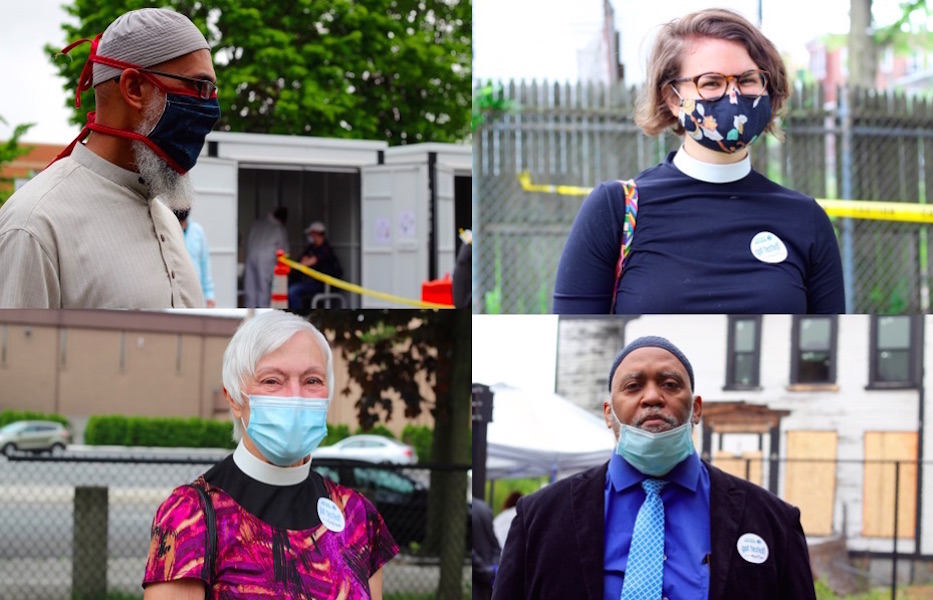 This year, it served to-go meals with a tiny army of volunteers. Masks and latex gloves became fast fashion accessories to hijabs and skullcaps of the faithful.

“We made the best of it, but it was very hard for us,” he said, adding that quarantine has been particularly challenging for his three children. “Usually, we work outward. It gave us a chance to work inward.”

That is also true for Imam Kashif Abdul Karim, who practices with the Muhammed Islamic Center of Greater Hartford and is a former chaplain with the Connecticut Department of Correction. As a diabetic himself, he has been living “very carefully” since March, and said he is grateful for the chance to be tested.

As he waited in line for his antibody test, he described COVID-19 as a “whispering virus,” particularly deadly for Black and Latinx residents with existing comorbidities.

“In other words, it comes from places that we can’t see,” he said. “As we reopen, we have to make sure that we do it in a healthy way, so that people with preexisting conditions and the elderly aren’t affected.” 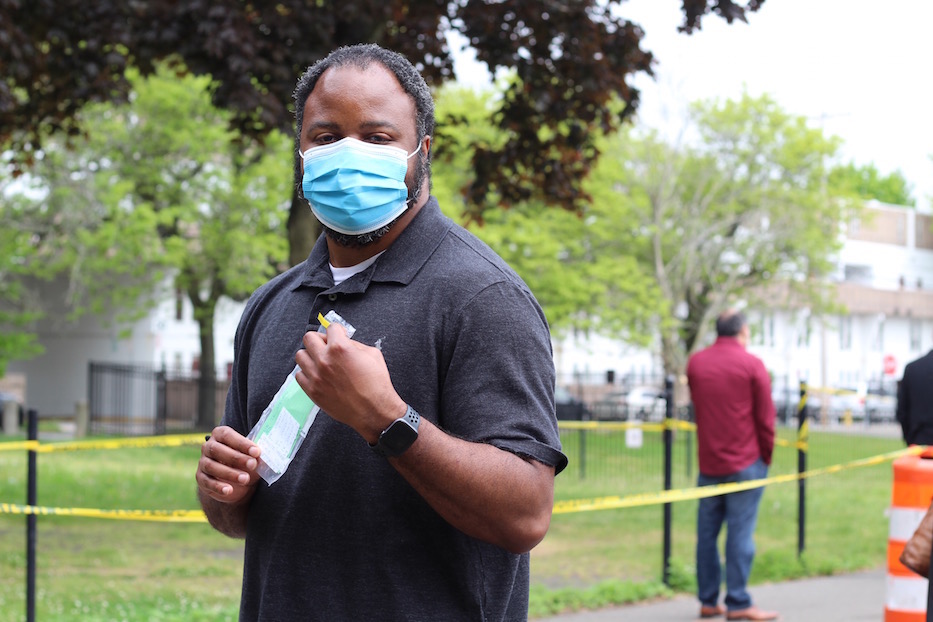 Rev. Steven Cousin, who presides over Bethel AME on Goffe Street, said the transition to virtual services has been difficult but rewarding, as elder congregants have returned to services that some had stopped attending in person. In March, the church closed its doors to weekly in-person worship and Bible study.

Cousin does not see reopening for several months, until data suggests it is safer to do so. He said the majority of members at the church are over 60 years old, meaning that they are at higher risk of complications from the virus.

In the meantime, he has learned to adjust. On Sundays, Cousin preaches from the sanctuary with a skeleton crew of a few vocalists and a keyboard player (“never more than five!” he exclaimed). Someone runs the service through Facebook Live as parishioners join online. Services now run closer to 30 or 45 minutes, instead of the two hours that they lasted in person. 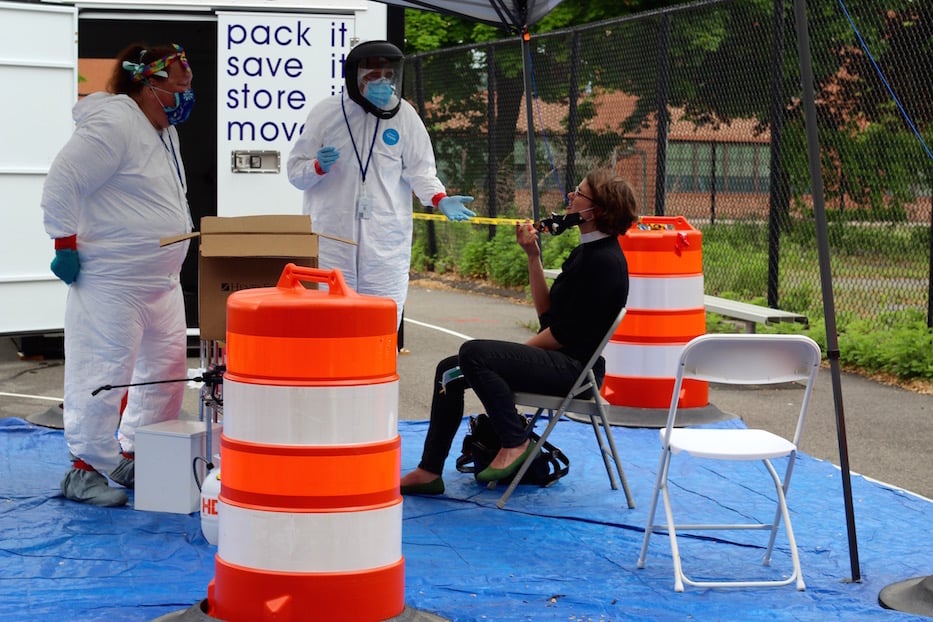 Still, he joked that there’s a “new pressure” he didn’t expect: those words now live online forever. Members of his family from as far as Tennessee and Pennsylvania attend. Cousin is a fourth-generation preacher: he worries that his words are bound to get picked apart. It hasn’t seemed to be a problem yet: on a recent Sunday, the service garnered over 500 views.

“I think it’s important that everyone get tested,” he said. “We want to be part of the solution. Not part of the problem.”

As he headed toward his car, Steele agreed. He said that he thinks the city—and the faithful in his midst—have the right idea. In the weeks since COVID-19 began, he has been providing online ministry with food and mask distribution efforts. He too has been extremely critical of the president’s urge to reopen churches.

"I'm gonna preach the gospel of social distancing until the numbers go down completely," he said. "Until there has been a vaccination to eradicate this virus. I'm gonna continue to do that, one because I love my people. And number two, I feel that faith is not reckless."