The Grocery Donation Initiative Marches On 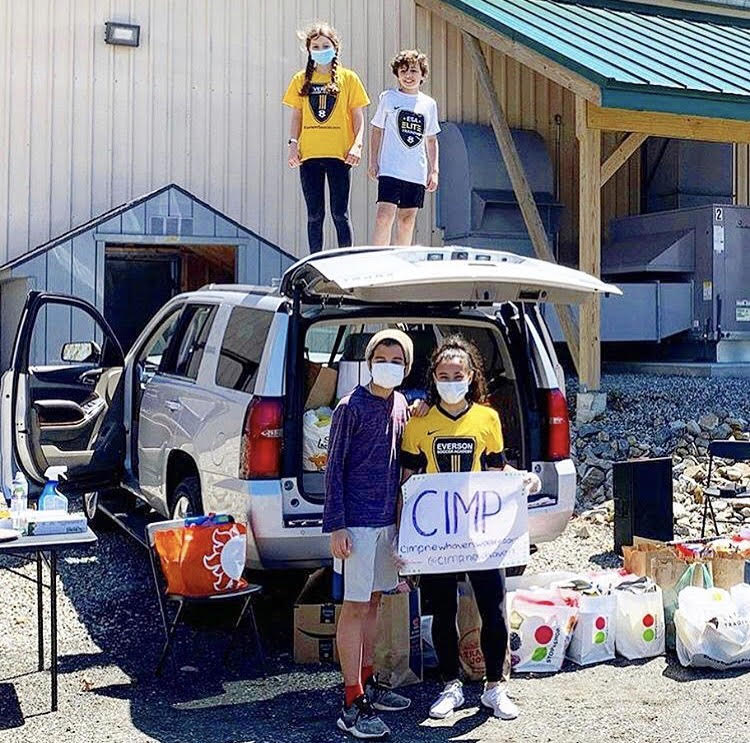 Gabriela Garcia-Perez has spent years learning to be a cultural bridge. Now, she’s using that skill to connect families with the food they may desperately need in the midst of a crisis.

Garcia-Perez—who often just goes by Gabi—is the founder of the Community Integration Mentoring Program (CIMP) and its subsidiary, the Grocery Donation Initiative. This month, the Guilford High School senior delivered thousands of pounds of food—and thousands of dollars in grocery gift cards—to families around the greater New Haven region. Many of them are facing food insecurity during the COVID-19 pandemic.

“I think lots of people within my community wanna help, and they just need a medium to do so,” she said. “You can see that ‘specially now with this whole situation with COVID. So many people want to help; they just don’t know how. They don’t know where to put their money, where to put the donations.”

Garcia-Perez’ interest in giving back comes from her own upbringing. She grew up in East Haven with a Colombian mother and Ecuadorian father. The family moved from East Haven to Guilford when she was in sixth grade. Her parents told her they’d moved because of the school system. She found neighborhood quiet and amiable enough. But she also felt like an anomaly as a Latinx resident of a majority-white community. 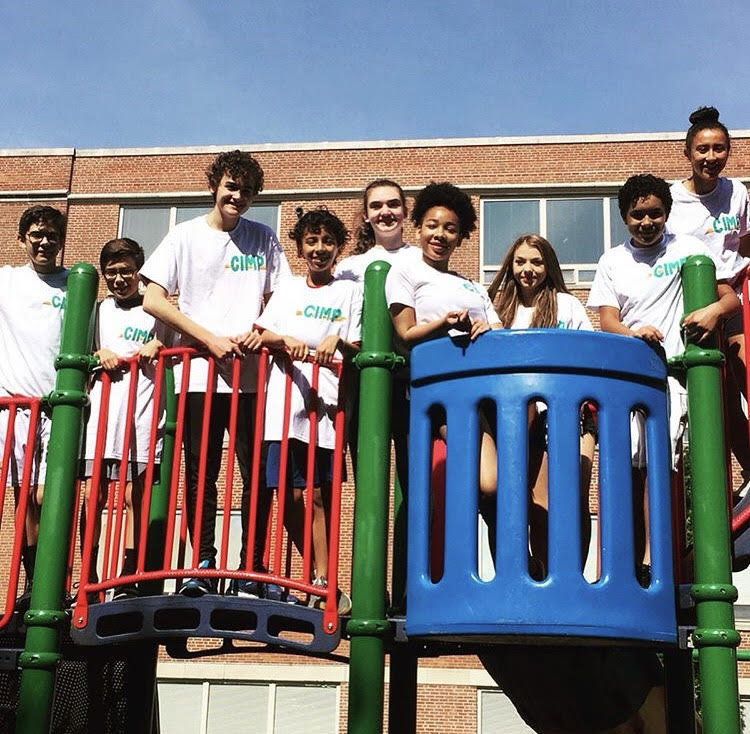 “Honestly, it was a culture shock just being that Guilford is very sheltered,” she said. “It has a lot of great people, but lots of students and a lot of the people in the area aren’t necessarily exposed to the realities of the world.”

For instance, she was surprised by how little her peers knew about the towns outside Guilford—and the extreme wealth divide that has come to define the state. By high school, she was seeing those realities firsthand, after a meeting with a New Haven educator moved her to organize youth in her own community.

That educator was Daniel Diaz, parent engagement coordinator for the New Haven Public Schools and the co-founder of community organization Arte Inc. In 2017, Garcia-Perez met Diaz through her mom, who'd held a fundraiser for the 1999 Colombia earthquake that he still remembers. Almost 20 years later, he was working with her on New Haven for Puerto Rico, a fundraiser for relief efforts in the wake of Hurricane Maria.

While at the fundraiser, Garcia-Perez spoke Spanish with Puerto Rican families who had been displaced by the storm and were living in the Fair Haven neighborhood of New Haven. One after another, they divulged their struggles to assimilate to the greater New Haven area. Most spoke little to no English. Garcia-Perez had learned the language within English-speaking communities. She began thinking about ways to become a cultural bridge.

“If they live in that sort of community, they’re not gonna be forced to speak English on a daily basis,” she said. “As they go to the grocery store, they’re gonna be interacting with people who speak Spanish. Same at home. Same at school with their classmates. Everybody can speak to them in Spanish. It doesn’t immerse them into the English culture.”

Under Diaz' supervision, she started volunteering with the New Haven Board of Education. Her task was to to stock supplies for homeless students: backpacks and school uniforms.  When she wasn't doing that work, she was researching the resources available to students for whom English was a second language.

She discovered that English Language Learners (ELL) received only “30 months of assistance within a bilingual setting,” she said. The news frustrated her: many students were failing to achieve their academic level of English due to a lack of resources.

In response, she met with Diaz and Fair Haven School Principal Heriberto Cordero. Both suggested that she join the Saturday Academy, a program that ARTE Inc. runs weekly (or did, before the pandemic) out of the Atwater Senior Center in Fair Haven. There, she founded CIMP.

"To me, it's a program where our kids are tutored by students that are just a few years from them in school," Diaz said in a phone call Wednesday. "Sometimes, they will listen more to their peers than to the adults. But, in my view, both groups got enriched."

From its inception in 2017, CIMP has grown to 50 mentors and 55 ELL students. Middle and high schoolers from Guilford, Madison, East Haven, North Branford, and New Haven come to the Saturday Academy once a week to work with ELL students and students with learning disabilities. Most mentors speak no Spanish, learning and growing with students despite the language barrier. 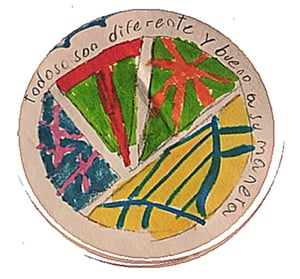 “We’re trying to connect these very different communities to interact and to learn from each other,” Garcia-Perez said. “And honestly, although we are coming in to teach these younger students the English language, they teach more to the mentors about life, exposing them to issues that they don’t hear about on their daily basis.”

She recalled some of the deep bonds that have emerged from the program. One mentor worked with a student on the Autism spectrum until he was more comfortable speaking in front of his peers. A girl in fifth grade told CIMP volunteers that she wanted to become a mentor because of her own. Other mentors broke down when they heard a seven-year-old girl speak about her family’s encounter with Immigrations and Customs Enforcement (ICE) officials.

Many of the students don't speak each other's languages, which means that they may communicate in other ways. A fourth-grader from New Haven drew a logo for CIMP to represent what it meant to him. It read “Todos son diferente y bueno a su manera”—“We’re all different, but it’s all beneficial for everybody."

David Greco, co-founder of ARTE and an organizer of the Saturday Academy, praised her work.

"For a high school kid to get other high school kids to give up their Saturday mornings every Saturday for three years, to drive from Guilford, to do this—that's just remarkable for me," he said. "That's amazing."

Then this spring. COVID-19 hit. From the years she'd spent talking to students, Garcia-Perez knew that numerous CIMP members came from families that were already struggling with food insecurity. She knew that others would not be receiving federal stimulus checks because they were undocumented. 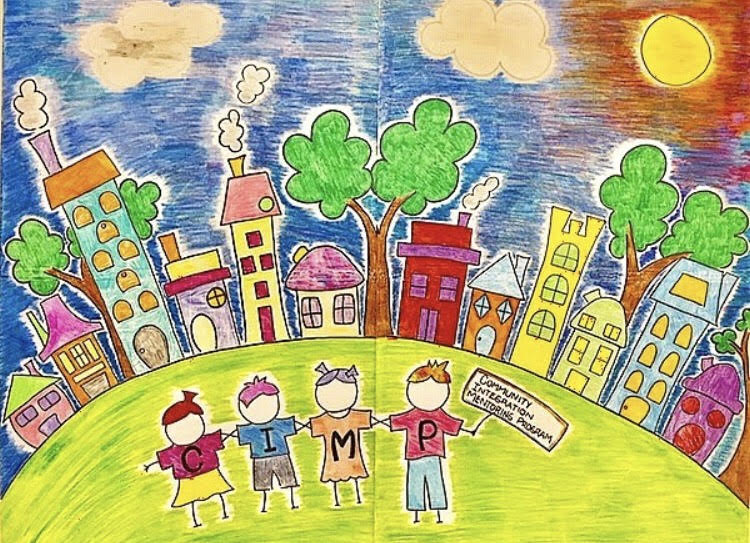 With Diaz’ assistance, she created the Grocery Donation Initiative in late March. Donors can send groceries to families in need through its online service, with “no direct exposure, no contact,” she said. Garcia-Perez, her younger brother Sergio, and initiative organizers reach out to families for their address information and the number of people within their household. Then they match donations to their recipients, scheduling delivery dates and times. The initiative also sends a portion of proceeds to other food drives and helps them accumulate goods.

In conjunction with the Soccer Club of Guilford, the Grocery Donation Initiative raised $1,105 worth of groceries and 3,500 pounds of food—the nonprofit organization Hope House received all goods. The initiative’s work is not over yet—Garcia-Perez said she wants to help everyone she can.

“It’s just the responses of people and us letting them know that their groceries are coming in on a certain day that gets me the most," she said. "They are very appreciative and very grateful."

The Grocery Donation Initiative has also exposed Garcia-Perez' peers to many of the realities they weren't seeing in Guilford. Some grocery recipients are elderly or physically disabled, unable to leave their homes. Some are recently unemployed or undocumented, and don't qualify for food stamps.

Others are struggling to support children or relatives who have additional needs. Some recipients have been sick from COVID-19 themselves, and unable to physically isolate.

“These are families who really are in need of a lot of help—just being so grateful and telling us that—sometimes crying and just being so strong in this time of need,” Garcia-Perez said.

Reached Wednesday by phone, Diaz said he is excited to see what Garcia-Perez does next year, as she heads to college. He's excited she'll still be close to home: she plans to attend the University of New Haven as her brother takes over a component of CIMP.

"She's always reinventing herself and thinking about the needs of the community," he said. "I think she is going to be one of our next young leaders."

CIMP and its Grocery Donation Initiative were recently awarded the Prudential Spirit of Community Award. Find out more about the organization or get involved here.