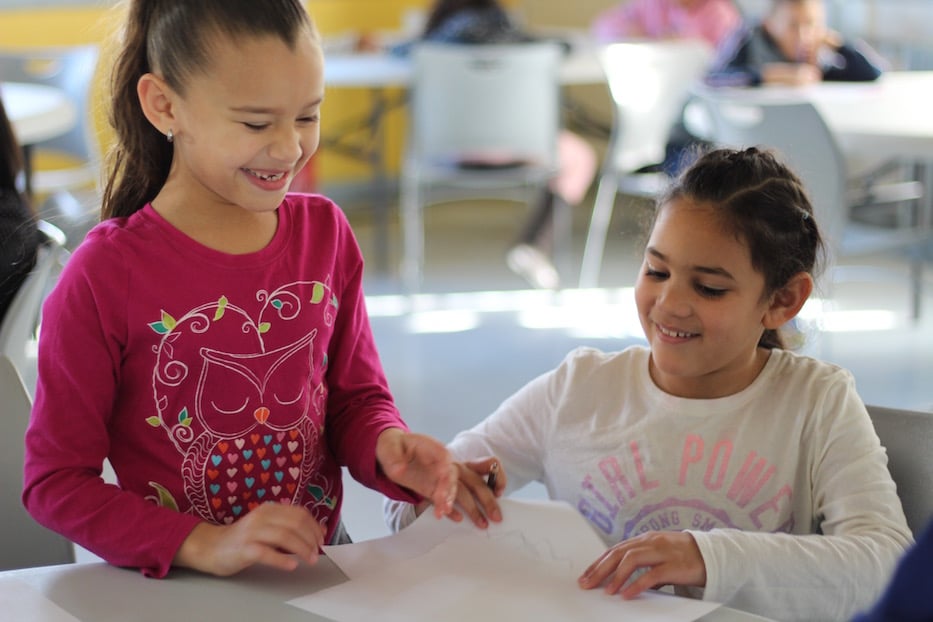 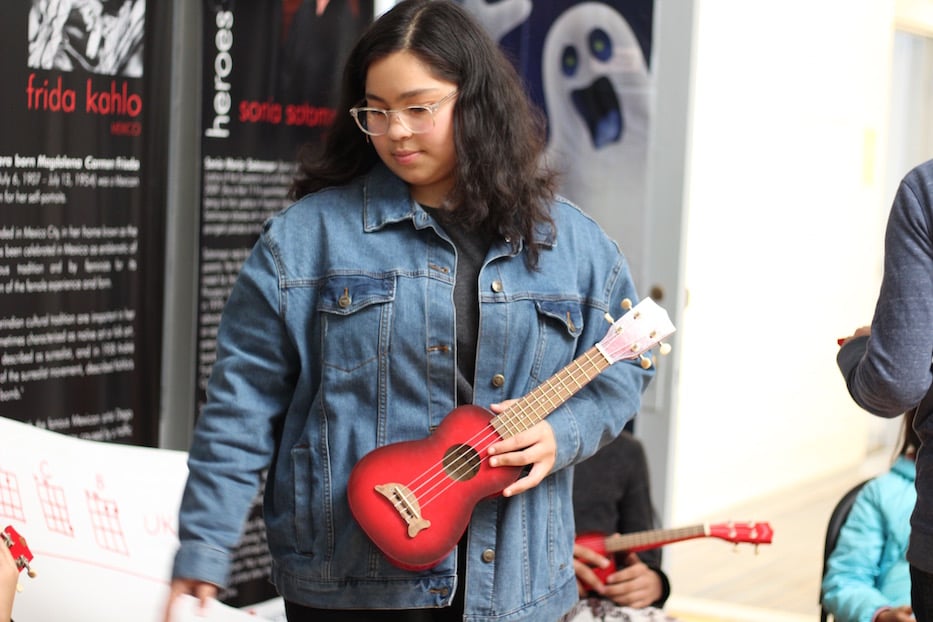 It was just past noon Saturday when the first flood of small feet flooded the Atwater Senior Center. In one room, students scrutinized a drawing of a woman’s face, teasing out the eyes and lips. In another, they gathered in a circle and started making up a story one word at a time. In a third, the rhythmic swish and step of bomba formed a lifeline to Puerto Rico, all the way out to Loíza and back. And the groups were just getting started.

Saturday, ARTE, Inc. sprang into action with the second session of its Arte Saturday Academy (A.S.A.), an arts education incubator held weekly at the Atwater Senior Center in Fair Haven. Intended for students from seven to 17 years old, the academy runs in multi-week sessions from Oct. 19 through May 23 of next year with classes in visual art, music, bomba and theater.

It is supported by a grant from the Mayor’s Neighborhood Cultural Vitality Grant Program and money from ARTE’s own scholarship fund. The program is $20 per six weeks for students, with tuition-free options offered to kids who are experiencing houselessness or are Hurricane Maria evacuees. More information is available in Spanish and English at ARTE's website.

Teachers are almost all New Haven high school students, who are supervised in turn by three New Haven Public Schools (NHPS) teachers who circulate around the space. For both A.S.A. students and seniors who use the center, ARTE Co-Founder and Executive Director David Greco has reinstalled ARTE’s traveling exhibition Heroes & Icons. 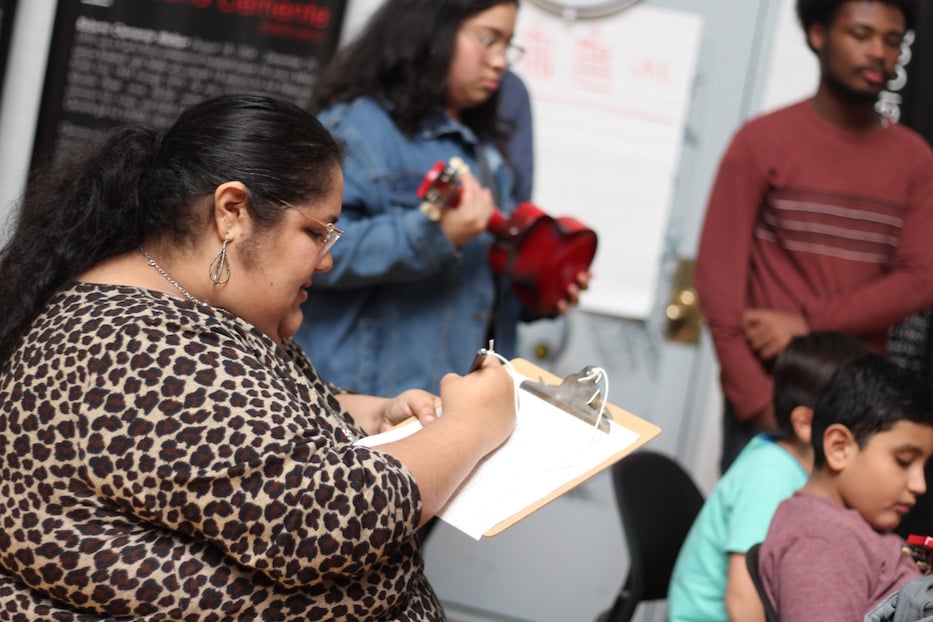 “The idea is that there’s a lot of arts programs in the community, but many of them are cost prohibitive for families,” Greco said Saturday, looking around as students tried out different class options midway through the three-hour program. “These are for everyone.”

“We’re teaching them about their history and legacy,” he added. “Bomba, for instance. You have a dance that started among African slaves, and when it ended up in the islands it was a form of communication.”

While there are close to 50 students currently in the program, Greco said he’d like to see it grow to capacity, which is closer to 120. Around him, the space exploded into sound: a beating, persistent cry of drums and rattling wooden sticks; a spirited game of "getting to know you" from theater students nearby; a flight of red ukuleles in the center of the large hall. Feet landed somewhere down a hallway and then fell into a rhythm together. 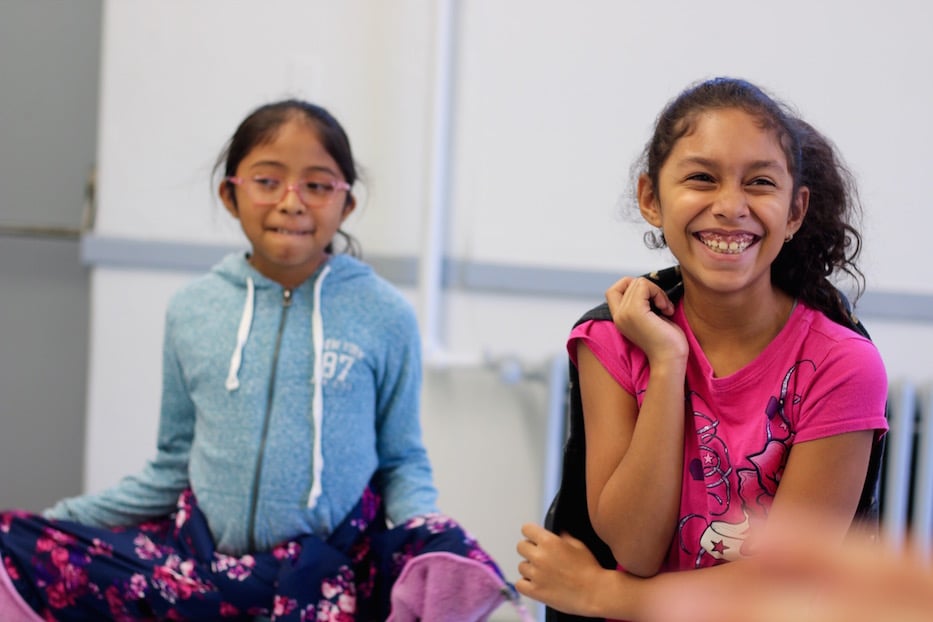 In a small room off the center’s atrium, high schoolers Brandon Oliveras, Kaleb Diaz and Jordan Wabahati warmed up with their first crop of theater students, passing an imaginary ball around the room. For some of the pint-sized attendees, it became a heavy object, flung to their neighbors with arms raised high. For others, it was worth hanging onto, and they lingered for a moment before passing it on.

“Woosh!” all participants exclaimed as they handed and threw it to one another, as if the shape and weight of a ball really had materialized in their hands.

Each teacher brings a different skill set to the program: Diaz is a violinist at Cooperative Arts & Humanities High School while Oliveras and Wabahati are both at Wilbur Cross High School. Wabahati also spends his afternoons at the Educational Center for the Arts studying flute.

At the end of six weeks, the three plan to have A.S.A. students perform a fully choreographed ensemble piece from In The Heights, Lin Manuel-Miranda’s breakout musical about a vibrant, tightly-knit Latinx community in Washington Heights, New York. Oliveras said he hadn’t yet decided on what number that will be, but had the musical in mind because it dovetails with real Latinx experiences that don't seem so different from New Haven. That, and "it's awesome."

“Theater’s not always a thing that, like, kids are into when they’re in elementary school,” said Oliveras, who flexed his musical skills in Sister Act at Wilbur Cross last year. “This gives them a chance to learn what it’s about.” 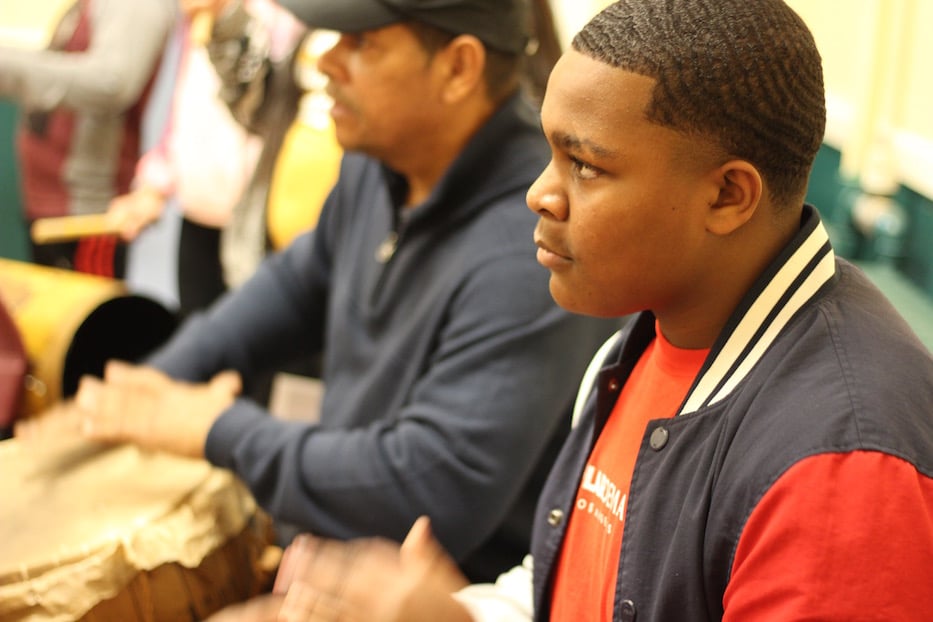 Down the hall, Hill Regional Career High School sophomore Juan Boone was easing into his first bomba class of the day, teaching alongside bomba veterans Sarahi Ayala and Carlos Cruz, each of whom have been studying the art form for over 25 years.

As Ayala fitted students with traditional straw hats and long, swishy skirts, Boone hammered out a rhythm with Cruz, listening for the downbeat. He signed up to teach in the program after spotting a poster for the program at his school.

“I love music overall, but this is new to me,” he said. “So it’s teaching while I’m also learning.”

As he sat back at the drums, the class snapped into action. Instructing three students who had drifted into the room, Ayala ran through the core idea of bomba, where the drummer follows a dancer’s movements. She bowed to the drummers, then bowed to the young dancers behind her. She worked to the front of the room, her feet in perfect time with her hips.

When she thrust one hip out toward Boone, so clean it could cut the air around it, he responded with a sharp beat, his eyes locked with hers. In the corner of the room, students Joslieny Baez and Camilly Lopez looked on intently, holding their skirts still for just a moment.

“It’s a communication between the dancer and the drummer, so anything you do, respond to him,” Ayala said. “And he responds to you.” 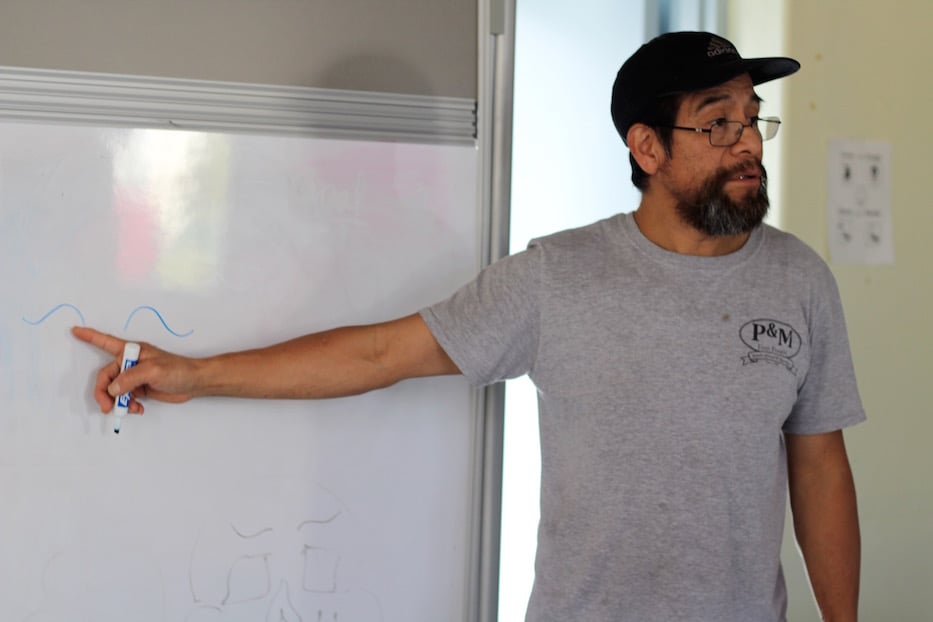 Across the atrium, students gathered in a huge circle around an instructor with a ukulele, following her every move. Nearby, artist Miguel Mendoza and a handful of students made their way around a newly-christened art classroom, working through the basics of drawing faces.

He sketched one out on the dry erase board, pointing out the different parts—eyes, a nose, cheeks, and hair—that build a human head. As an immigrant to New Haven, he said that he values A.S.A. as a chance to teach, which he is not able to do between part-time jobs here.

“In Mexico, I am a teacher,” he said. “Over here, I am not doing a lot of art. What I’m trying to show these girls and these guys is that they can do a face very simply.”

At a table, Alana Jiminez-Claudio and Alex Fernandez sorted through colored pencils, and began working on their drawings. Erika Velasquez, a sophomore at Wilbur Cross, came over to give them a hand.

In addition to the four core disciplines, Greco and ARTE Co-Founder Daniel Diaz said they are interested in bringing in special classes, including mariachi, salsa, capoeira, ceramics and visits from multiple artists practicing in New Haven. During a first iteration of A.S.A. in March of 2019, Greco said that capoeira was particularly popular among students.

As the program blooms into its second iteration, it is also creating a pipeline for potential educators of color when they may be needed most in the American school system. High schoolers that teach in the program are compensated for their work part of the time (they volunteer the other part of the time). For NHPS instructors Natalie Jimenez-Lara and José Lara, who supervise the high school teachers with Fair Haven School band teacher Dan Kinsman, it’s a chance to see their former students in action.

“I’m a product of New Haven,” said Lara. “I used to be a New Haven student, and now I’m a New Haven teacher. This is trying to keep the culture we love alive. A lot of the volunteers are our former students. We’ve got to pass it on.”

To find out more about ARTE, Inc. and the ARTE Saturday Academy, check out the organization online.