'The Hypogean Tip' Unearths Bridgeport's Past 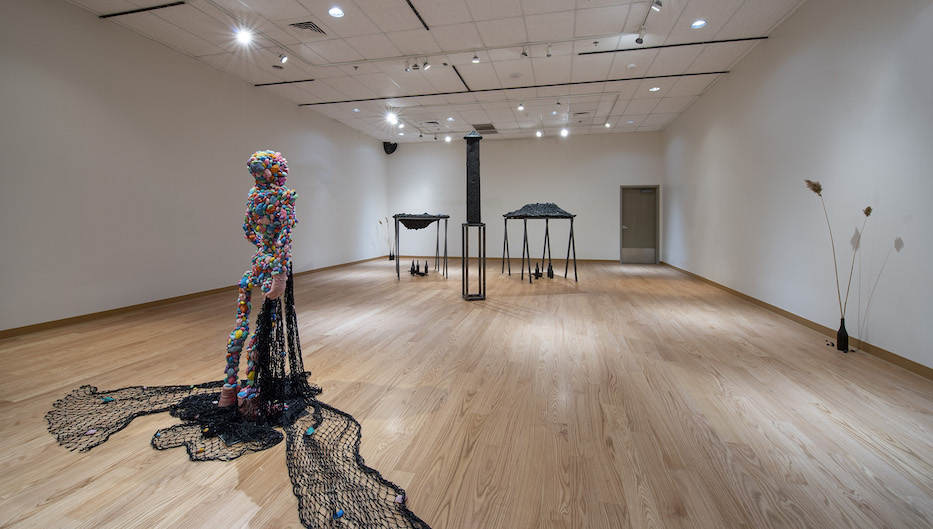 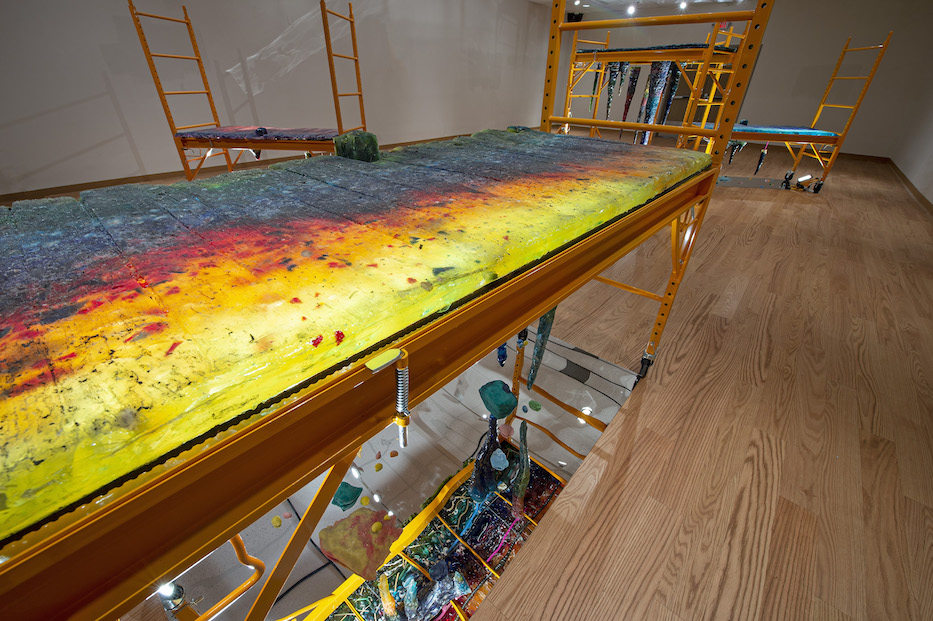 Several orange scaffolds host glittering floors, each made from brightly-colored pieces of glass cast in resin. Underneath each scaffold, spikes protrude like stalactites, pointing toward acrylic mirrors placed on the gallery floor. The mirrors reflect the gleaming underbellies of these sculptures, exposing shells, pieces of grass from nearby marshes, stones, and other materials preserved within each of rainbow-colored platforms.

Welcome to Rachel Owens’ The Hypogean Tip, on view through March 21 at the Housatonic Museum of Art at Housatonic Community College in Bridgeport. In the exhibition, the contemporary gallery becomes a portal to the city’s past, and to an oft-forgotten role that Connecticut played in the country’s struggle for Black liberation.

Positioned at varying heights, these five scaffolds by Owens are intended to be touched. Viewers can scale the steps and sit on the scaffolds; they can change their physical perspective depending on where they are. It feels like a metaphor for the ideological shifts Owens incites through her re-casting of materials. 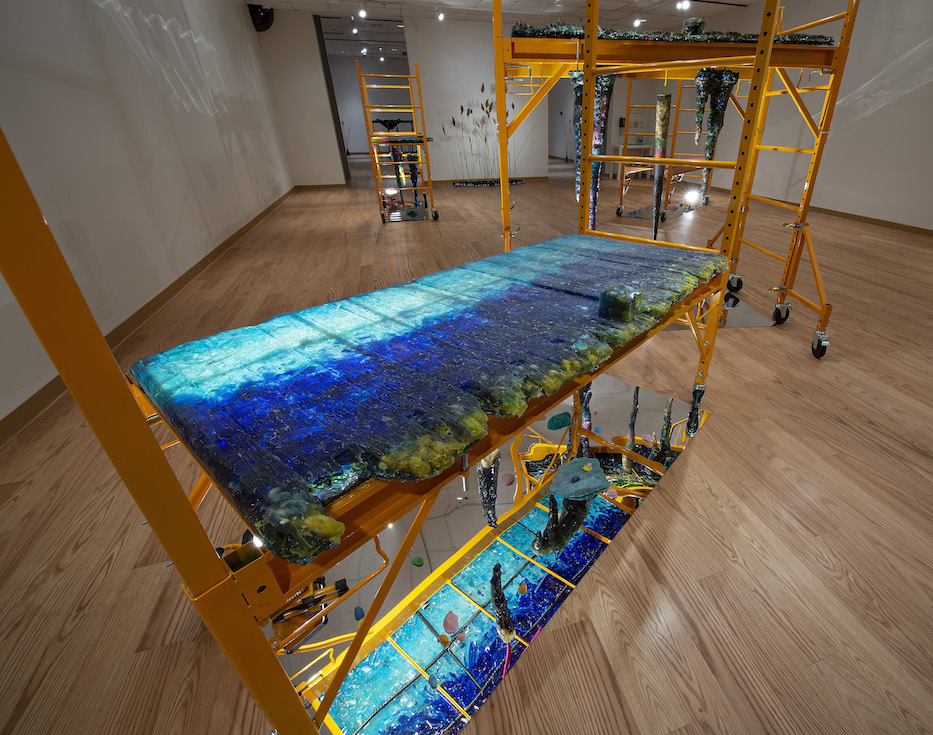 These vibrant interactive works are the latest additions to Owens' series Life on the Other Side of the Cracked Glass Ceiling. The series is an ongoing project that “seeks to explore, unpack, address, and ultimately continue to dismantle hierarchies that since the election of Trump have catapulted into hyperdrive,” according to the artist’s website.

The physical casts of specific landscapes and architectural sites—such as the floorpan of Susan B. Anthony’s attic office—act as a stage. Owens’ ideal audience for these elevated scaffolds are viewers and performers who identify as marginalized.

She cites Paulo Freire’s Pedagogy of the Oppressed as inspiration, alongside the proverbial glass ceiling. As scaffolding is erected to repair old buildings or create new ones, Owens adapts the function of these impermanent systems to construct her platforms for envisioning new societal constructs.

For the current iteration of the series, Owens visited a location of extreme relevance to the museum: the homes of Mary and Eliza Freeman in Bridgeport. Less than a mile from the museum, the Mary & Eliza Freeman Houses are the only remaining buildings from Little Liberia, a community of freed blacks, runaway slaves, and Indigenous peoples that formed in 1821.

Now part of The Freeman Center, the continued restoration of these dilapidated houses is central to the plan which will also feature a museum, research, and education center. 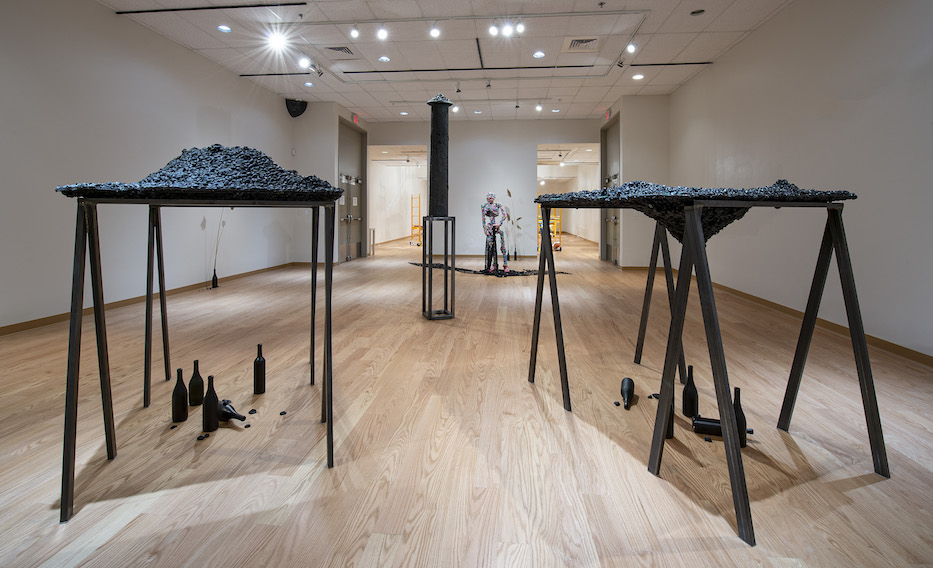 The Freeman sisters purchased two lots to build their homes in the South End of Bridgeport in 1848. The 13th Amendment would not be passed for another 14 years. American women did not have the right to vote for over 70 years. The real estate holdings of these two black unmarried sisters are an exceptional feat—one that Owens wanted to underscore in her exhibition.

Chernow Galleries Director Robbin Zella writes in the catalog introduction that “this history has only been unearthed relatively recently and plans to restore Mary and Eliza Freeman’s homes are slowly being realized.”

Owens’s realization of the work for the exhibition was likewise slow, yet deliberate. About a year and a half ago, the artist began visiting Bridgeport at the invitation of Zella. Maisa Tisdale, the President of The Freeman Center, guided Owens toward the work of Charles Brivlitch, a Lithuanian-American historian who detailed the founding of Little Liberia in his 2007 book, A History of Connecticut’s Golden Hill Paugussett Tribe. This text, coupled with Owens’ material research into the site and the broader history of Bridgeport, became the foundation for the exhibition.

Closer inspection of Owens’s glass sculptures reveals the coarse grain of wood planks: the multi-colored glass sheets of the scaffolded sculptures have been made from casts of the porches at the Freeman houses. The embedded materials—shells, grasses, and stones—were also collected from the area. During her visits to Bridgeport, Owens scoured the protected marshlands behind the Freeman houses and other adjoining areas such as a nearby coal power plant.

Remnants from this power plant inform the shift to a mostly black color palette in the second room of the museum. Found broken bottles coated with a mixture of coal and resin rest on the floor below two sculptures, Hypogene (2020) and Epigene (2020). Their titles refer to their alternating concave and convex forms, alluding to geologic phenomenon while aligning with the exhibition’s title. The notion of unearthing connects to the buried histories Owens endeavors to expose throughout her show.

Across this gallery, a skeletal figure rises from a fishing net. In Siren (2020), the body of the figure is composed of candy-colored seashells made from marble dust and resin. Owens intended this peculiar creature to recall the “Feejee Mermaid,” P.T. Barnum’s pseudo-mermaid that was part-ape, part-salmon.

Owens invokes the complicated past of the Connecticut-born entrepreneur and showman again in another work titled Hatstack (2020), a towering black tophat on a matte steel pedestal. At nearly nine-feet tall, this elongated hat stands as an ominous emblem of power and economic force within the space.

These references to Barnum and the Freeman houses paint a complex picture of Bridgeport’s past. Owens celebrates the most radical pieces of this history by highlighting the Freeman sisters and their influence on a unique community. At the same time, she excavates the debris and details that were hidden—intentionally and otherwise obscured—to shed light on the intricacies of race, gender, and capitalism that have shaped Bridgeport and many other American cities.

The Hypogean Tip runs through March 21 at Housatonic Museum of Art, Housatonic Community College. To find out more about the museum’s hours and collection, visit its website.