“The Word” Packs A Poetic Punch 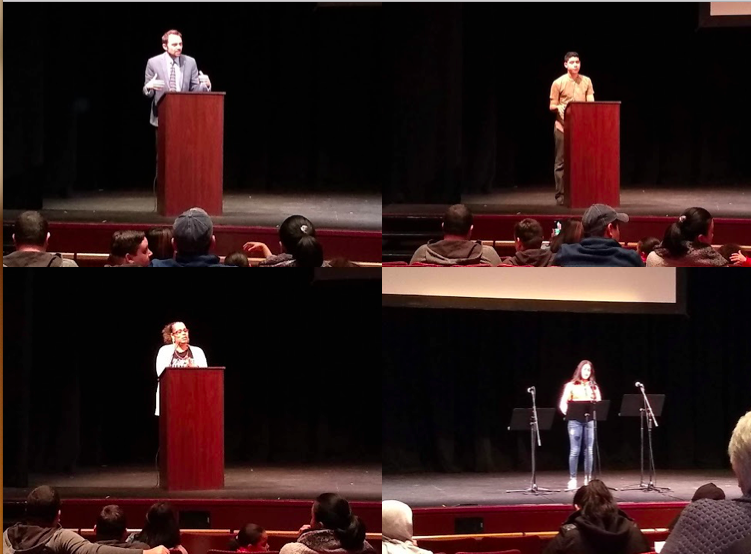 Alex Pèdros stood at center stage, looking out into the audience. The auditorium hushed around him. In his hands he held the story of his parents, and a love for them that he was still figuring out.

Friday, Pèdros was one of several young bilingual poets at the seventh annual Citywide Middle School Poetry Jam. The jam, held at Cooperative Arts & Humanities High School, featured middle and high school poets from New Haven Public Schools (NHPS). Many prepared their poems in both English and Spanish, with subtitles for the audience.

That was the case for Pèdros, a high schooler who took the stage to describe an internal struggle. One one hand, he’s growing up according to his parents’ expectations. On the other, he is struggling with his family’s perception of manhood. His poem delved into a conversation between him and his mother about the relationship he has with his father.

“Mom tells me it’s different with him,” he read. “She says he grew up different.”

His frustration came across as he explained how his parents misunderstood what he meant by him not being anything like his father. Pèdros suggested that despite his father's warning to stay away from the world that is “lleno con locura” or “full of madness,” he is not perfect either, taking out his problems on others and constantly reprimanding his children. But he also praised his dad as filled with love, compassion and hope.

“Am I the same little eager boy that you loved?” he asked as he read. “The adolescent you hope will take charge of the house one day? Am I the son that you can be proud of?”

Pèdros’ work echoed through other poems as several narrative threads tied the jam together. Particularly common was the idea of a wall. One middle school student personified the wall (listen here), painting it as an ominous creature that separates family.

Jam host Aaron Jafferis played emcee during the night, introducing fifth and sixth grade students to read a series of jammy, poetic raps. He set the stage for them by reading a poem of his own—to show what poets shouldn't do during the night.

“What? What’s, What’s wrong with the poem?” Jafferis asked them.

“And you didn’t use enough energy,” a student yelled back.

Themes unspooled as young poets took the stage one by one: animal brutality, the environment, President Donald Trump and the U.S. government, and family dynamics in their lives and their homes. Listen here for some of them.

Jafferis had participants write down words they couldn't translate, moments they have translated or needed translation for, and situations in which they wished they’d had a translation. After giving them a few minutes, he picked a few volunteers to share what they had written, assembling a final poem on the auditorium’s projector.

The exercise spoke to the importance of the jam being bilingual. In New Haven, Spanish and English are two languages that, for many students, divide their home life from the outside world.

As some listeners struggled to understand what certain poems meant, they got a little taste of what many students feel on a day-to-day basis. And as they filed out and into the night, they took it with them.